Our best friends, Mike and Melissa, decided to take a holiday to Europe. As this is on our doorstep, we tagged along. The vacation started in Zürich for four days, then moved to Paris for another four days.

It all started with a two-hour flight from the abysmal "London" Luton Airport, which brought us to ZRH. We arrived at 17:30 and got a brief train to the central station. Walking outside, we could easily see the architectural monstrosity that was the Marriott Zürich - our hotel for four days. The Marriott was far enough out of town to make it a nuisance to get to. It was a 15-minute walk to our friends' hotel, the much more conveniently-located Hotel Adler on Niederdorfstrasse. 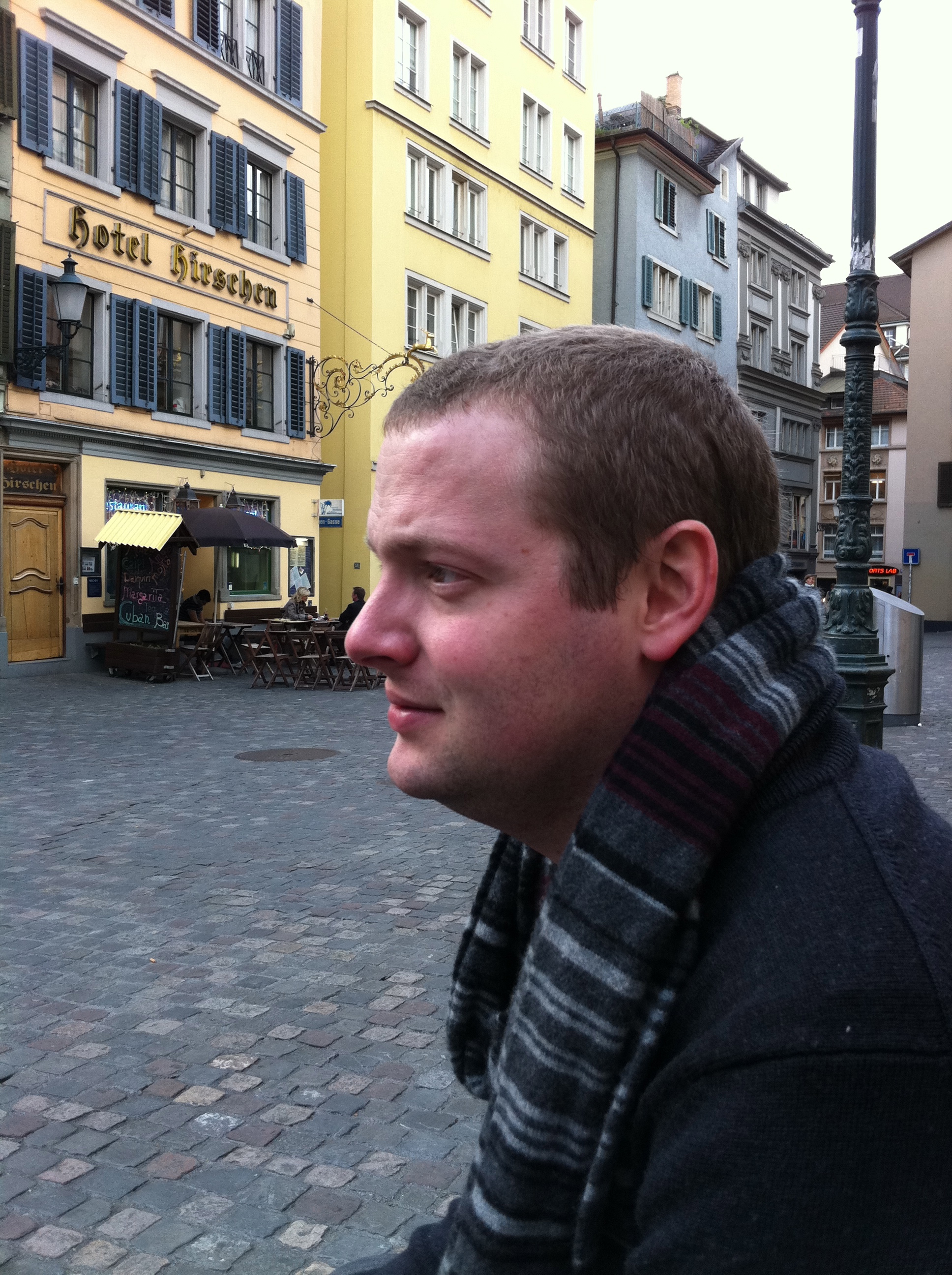 First thing's first - Zürich is very expensive. As I'm writing this, the Swiss Franc is particularly strong against the USD, the Euro and the GBP. Beers cost 5F on average, and cocktails are easily 17F. Even a gin and tonic at Kon-Tiki was 13F. Very slimming for the wallet.

Secondly, Zürich was pretty chilly. I thought I'd put my scarf away for the spring, but I had to bring it back out for this leg of the trip. (Although Mike and Melissa, hailing from Toronto, said it was about the same temperature as there...)

We tried to eat fairly traditionally. We ate at a couple of "bierhalles" - bench-style seating with various schnitzels and wursts on offer. The Zeughauskeller, at the southern end of Banhofstrasse, was very good. I wanted to take home vats of their potato salad. 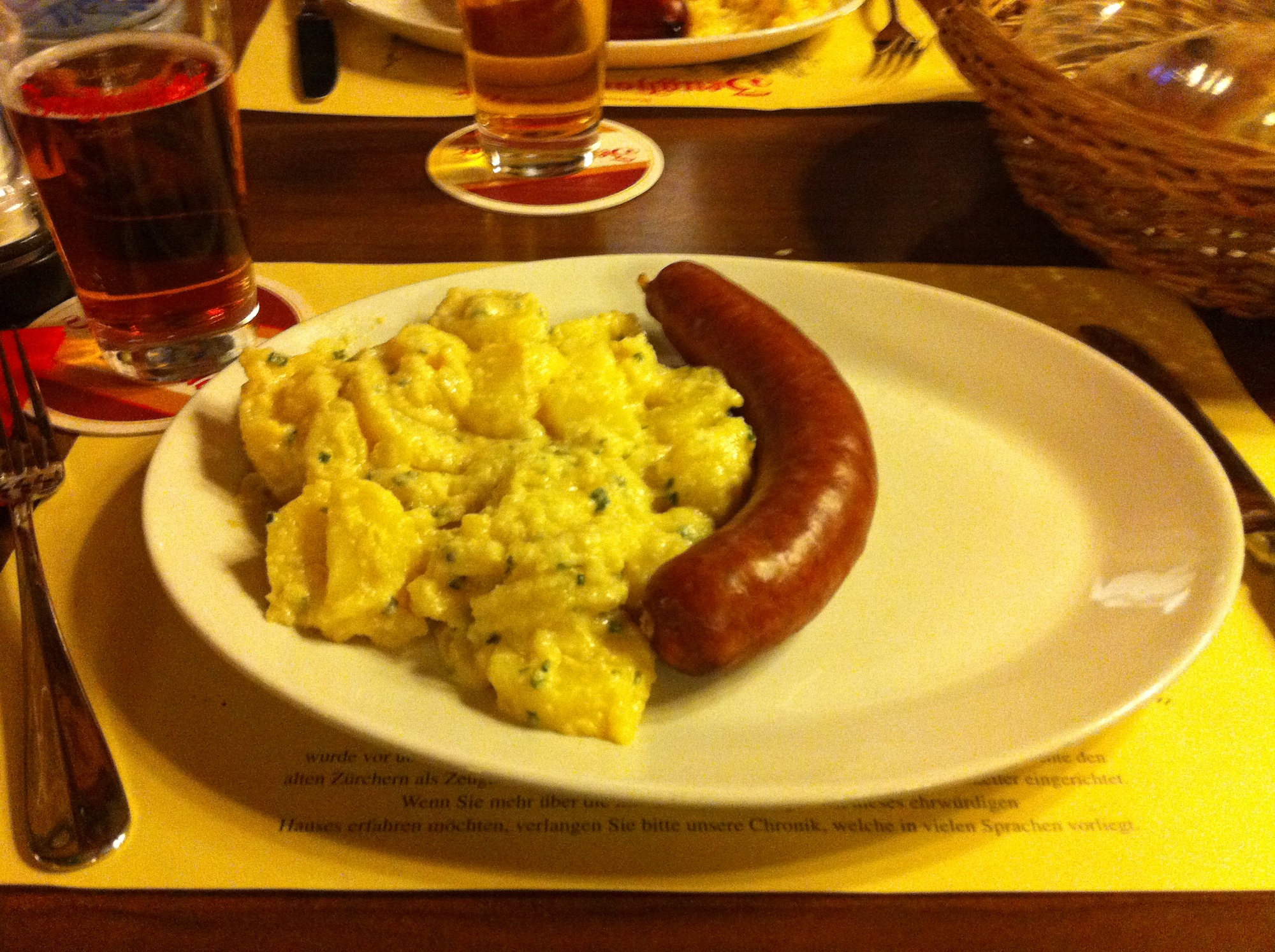 We (of course) also ate at a fondue restaurant (underneath Hotel Adler, the Chuchi). Fondue is difficult to get wrong, really. Melt some cheese, add some alcohol and boom goes the dynamite. We ordered a "traditional" and a "speciality" pot, and found we were evenly split as to which we thought was the best. 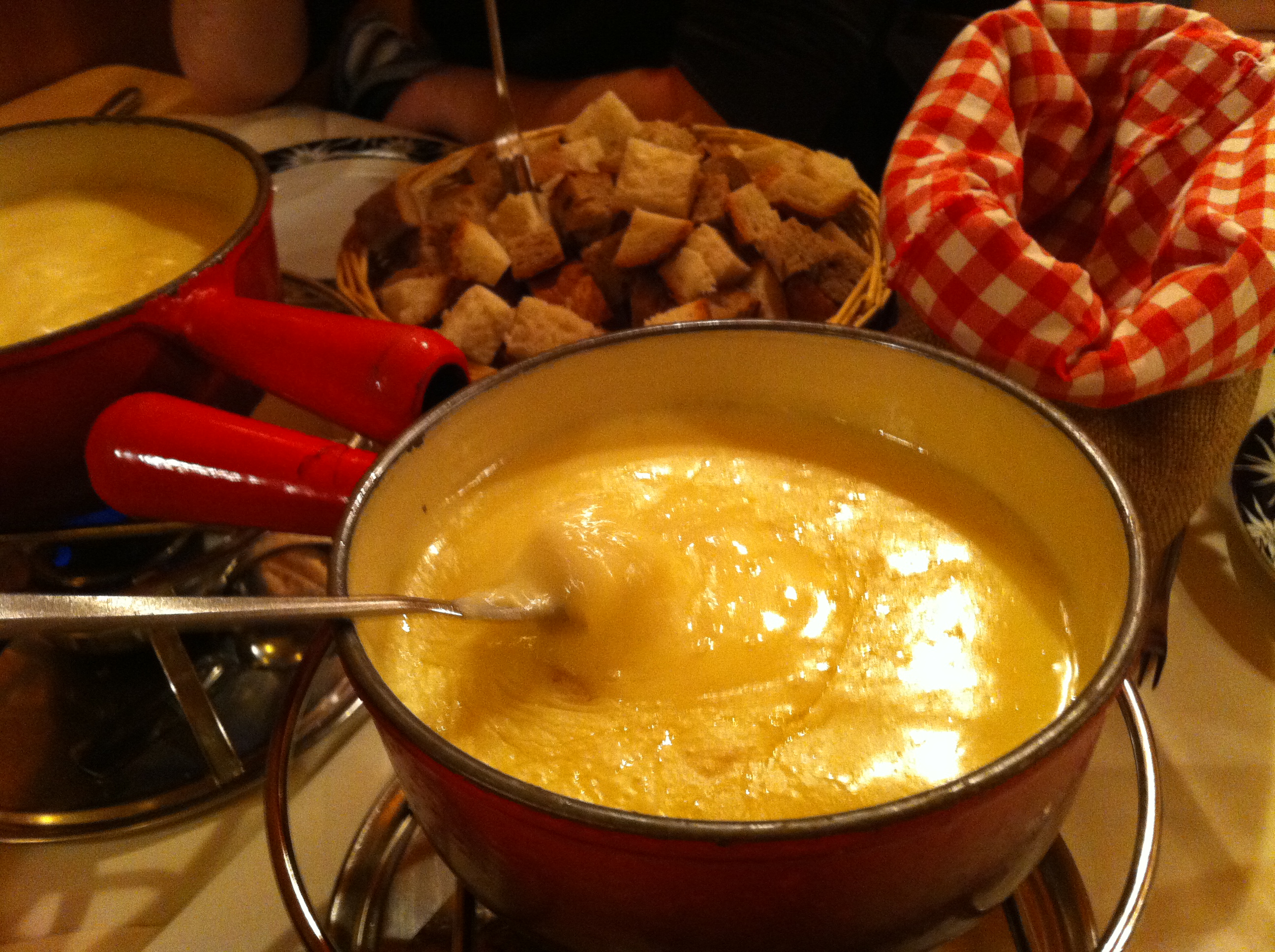 On our first night (Melissa's birthday), we ate at Hiltl, the oldest vegetarian restaurant in Europe. It was pretty good - I had some amazing fried tofu, and stole some of Hampton's truffle risotto. Nom nom, indeed. 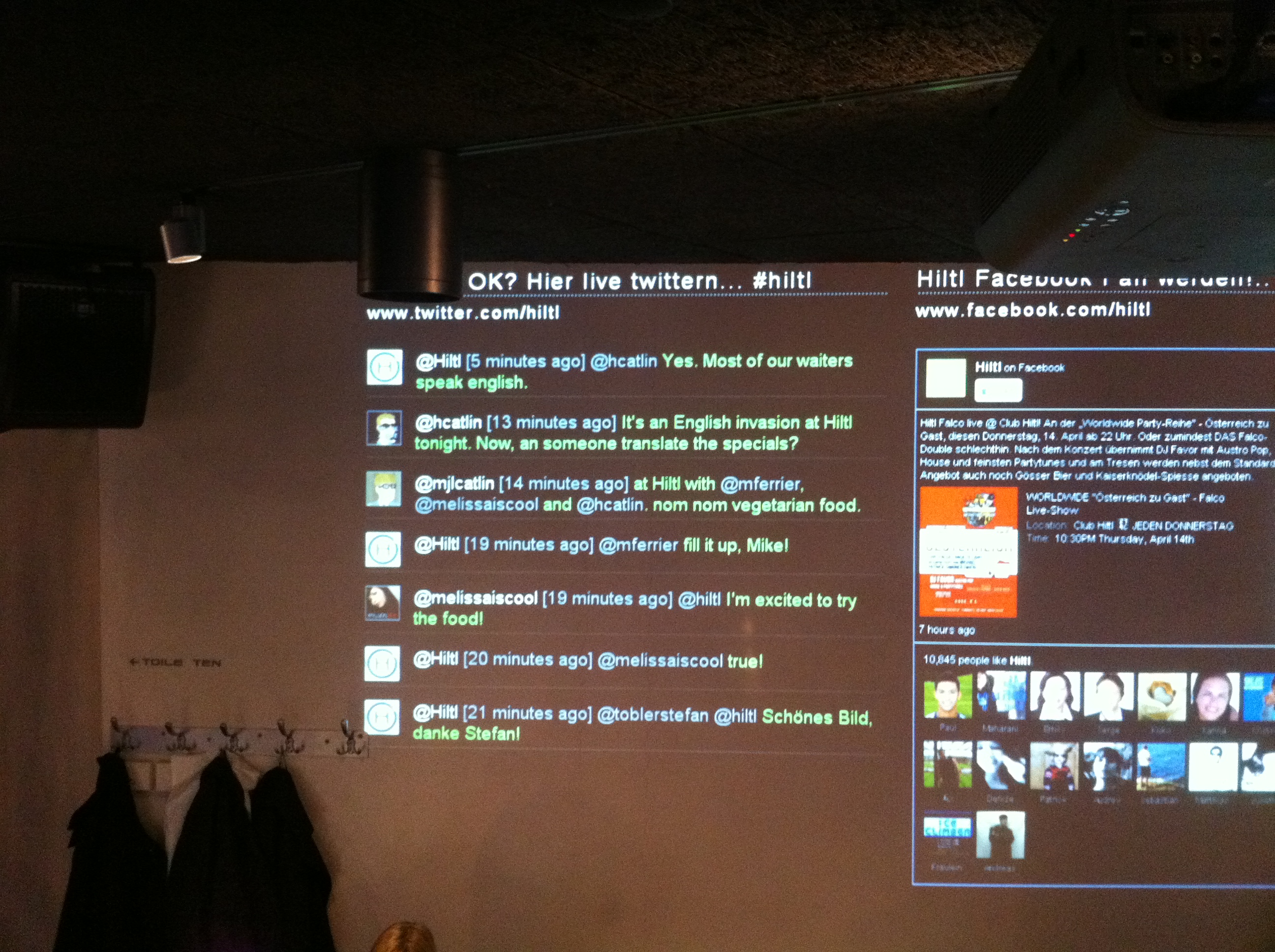 Hiltl had its twitter mentions projected on a wall

Hiltl had its twitter feed mentions projected on the wall! Activity-wise, I think there's a fair amount to do in Zürich. However, we didn't do a whole lot. We went on a boat-tour of the lake and river, which was pleasant (especially in the gorgeous sunshine we received). We also went to the Museum für Gestaltung Zürich (a design museum), which was neat. It had a cool exhibition on the visual use of text, with a few music videos (including Subterranean Homesick Blues by Dylan) and opening titles to movies (e.g. Se7en and Panic Room). 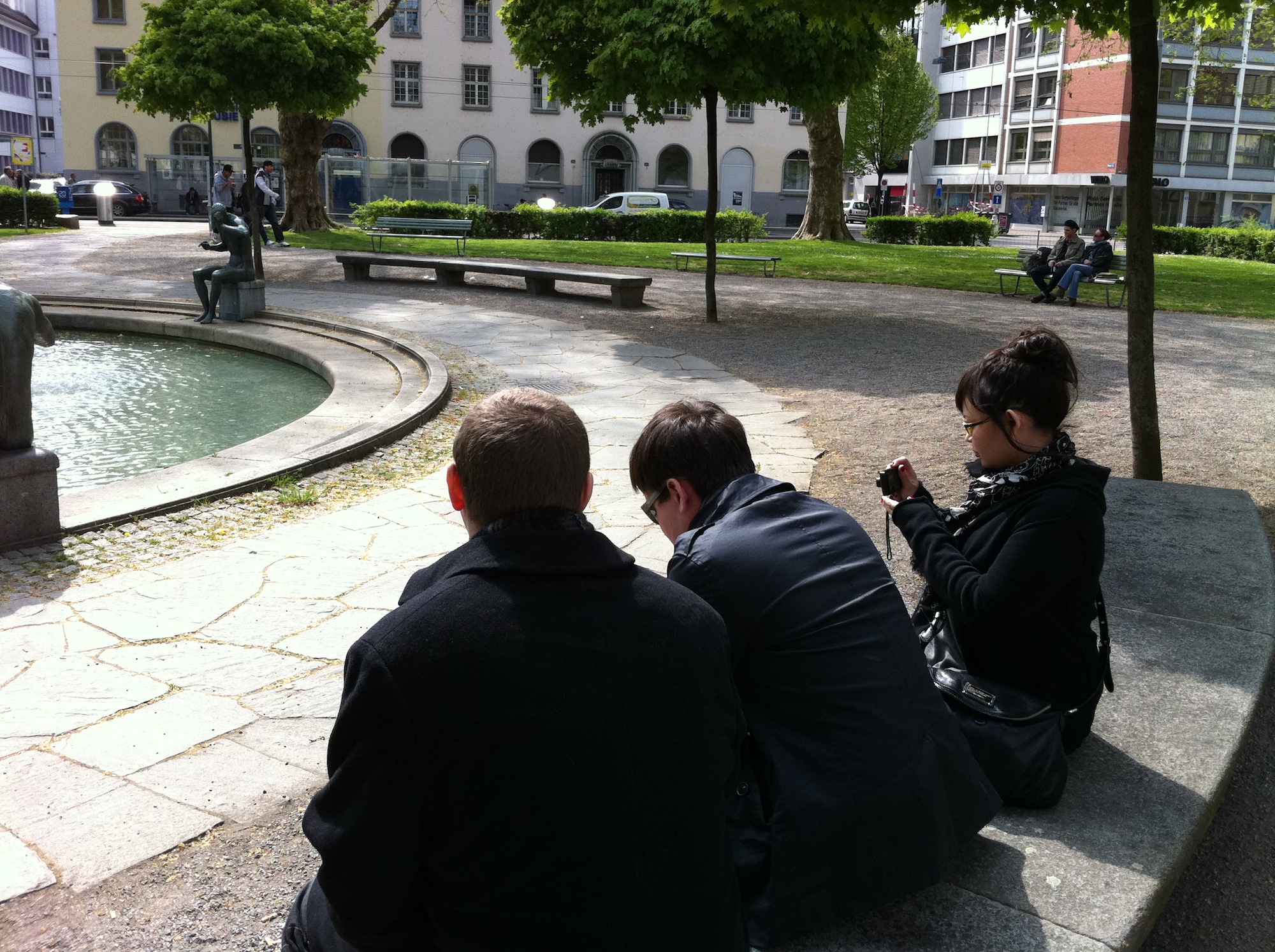 Outside the Museum für Gestaltung

We mainly went to cafes (for example, the Cafe Odeon - frequented by Lenin and Tchaikovsky, apparently) and bars (for example, Wings, an airline-themed bar). It was fun, though. Last time we went (February 2010), we coupled the trip with some skiing - which was a lot of fun, too.

So, all in all, it was a good holiday. The second leg, Paris, is up next.