A Few Hours in London

Last weekend, we went to London to see some of our best friends. We only really had an afternoon and evening. We started by heading to South Kensington and wandering around the V&A for a bit. I love the V&A. It's got enough variety to keep things interesting. We visited rooms on architecture, Islamic history and British design in the late Victorian era in the space of a couple of hours. Awesome stuff.

Anyway, we went to a pub, then to sushi at Kulu Kulu, a conveyor belt place. Lots of delicious food... but weirdly lacking on the fish. Still, I'm not complaining. Their stewed aubergine thing with soy sauce was amazing. Nom!

One of our friends had heard about an absinthe bar nearby. In fact, it was underneath a restaurant (the Brompton Bar & Grill). I've never had absinthe before. Although it'd been banned in the USA and France, it was always legal in the UK. I guess no one liked it enough for it to present much of a "danger" to society. Now the green fairy is being legalised in many countries, drinking absinthe is finding a resurgence.

We decided to skip cocktails with absinthe and go straight to the pure stuff. There was a great theatricality to the process. A water cooler (in 19th century French style, of course) was put on the table with four miniature taps. 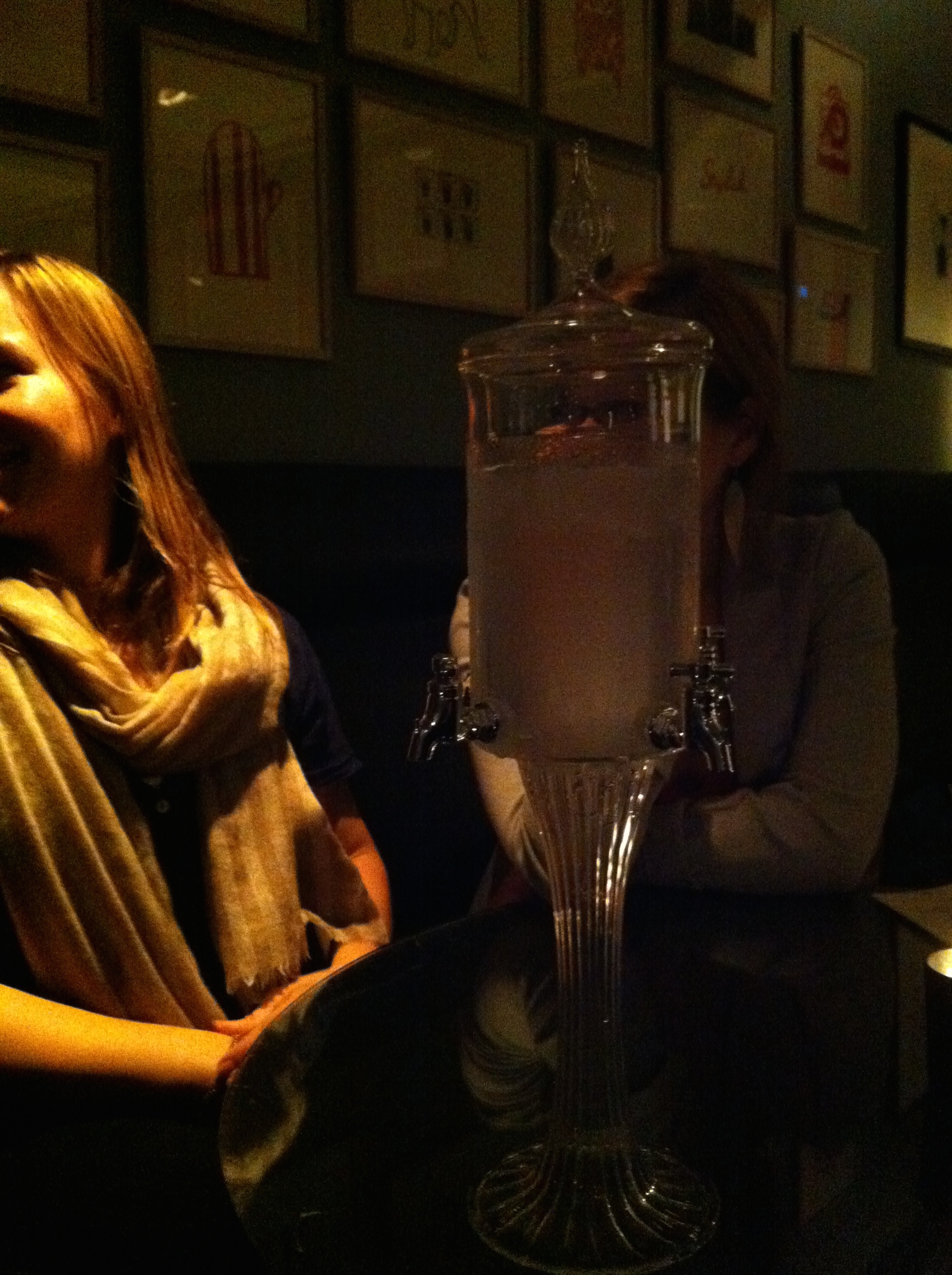 This was filled with ice-cold water. (Sorry the pictures are so dark. It was underground and mainly lit by candles.)

We got a small glass with some absinthe in. Balanced on top was a special spoon (shaped like a leaf) with holes in it. A brown sugar cube was placed on top. You put the sugar cube underneath the tap and slowly let the water drip onto the cube. The sugar dissolves and drips down into the absinthe, diluting and sweetening it.

Once all that's done, you can drink away. It wasn't as liquorice-y as I thought it might be. Which is good, because I hate liquorice. It was certainly an enjoyable experience, even if I didn't hallucinate.

After that, we made a trek to the north-east of London to the Worship Street Whistling Shop. It's a Victorian-themed bar, with many gin-based drinks. It was too dark to take decent photos inside - but there were lots of barrels and canvas-covered stools. The waiters were dressed in something akin to what barbers wear.

Anyway, the drinks here were a-mazing. Pricey, but still. I got the "Panacea" (Compass Box Whisky, honey and lavender shrub, lemon juice and sage dust) the first time around, then the Civility Cocktail (Lillet Blanc, Martini Extra Dry, WS2 Exhaustion Tonic and WS2 raspberry syrup). They were super-tasty. I'd highly recommend this place. Apparently, this is the second bar this company has opened - so I desperately want to visit their first, a speakeasy near Marylebone called Purl.