I had never been to Austria before, so I was excited for my first visit. I wondered how much like Germany and Switzerland it would be.

We were attending Codefront.io, so took an early flight from Paris to Vienna, then a coach to Linz. After a quick nap in our hotel (which was near the conference venue, and a little tricky to get to the centre from), we headed to the old centre of Linz. As it was Friday evening, there were brass bands and beer stands everywhere. It was quaint, and everyone seemed to be having a good time. Although after living in the US for a while, it was strange seeing people drinking on the street.

We made a bee-line for the best-rated cocktail bar on Yelp: Cocktailbar Easy (yeah, I'm not sure about the name either).

Here's a thing about cocktails in Europe (as far as Hampton and I can tell). They tend to be sweeter and less alcoholic than those you get in the US. Cocktails here tend to have a lot of fruit juice, and remind me more of something you'd get on a cruise ship in the US – piña coladas and daiquiris, for example. If you order a Manhattan, be prepared for a lot of vermouth with a bit of bourbon, served over ice.

Anyway, that's why we were excited about Cocktailbar Easy. They served US-style cocktails. As far as we could tell, though, we were the only people drinking them. Everyone else had drinks in hurricane glasses with a neon-red cherry and a slice of pineapple on top.

The drinks were pretty good, but there was one jarring aspect – which turned out to be true across the Austrian bars we visited. People smoke indoors while they drink. And I'm not talking one or two people in a room of 50-or-so. In Cocktailbar Easy, I'm pretty sure 50% of the crowd were smoking.

As the seating was mainly at the bar, we had groups sitting either side of us. They would hold their cigarettes away from their friends – right in our direction. It was pretty overwhelming and soon I couldn't really taste the cocktails we had. We are (somewhat) used to dive bars allowing smoking indoors, but at a fancy cocktail place it seems strange. Wouldn't they want to emphasise their nice-tasting drinks?

A nice bit about the bar: as you come out of the smokey room into the fresh air, you're right in front of the Linz Neuerdom. 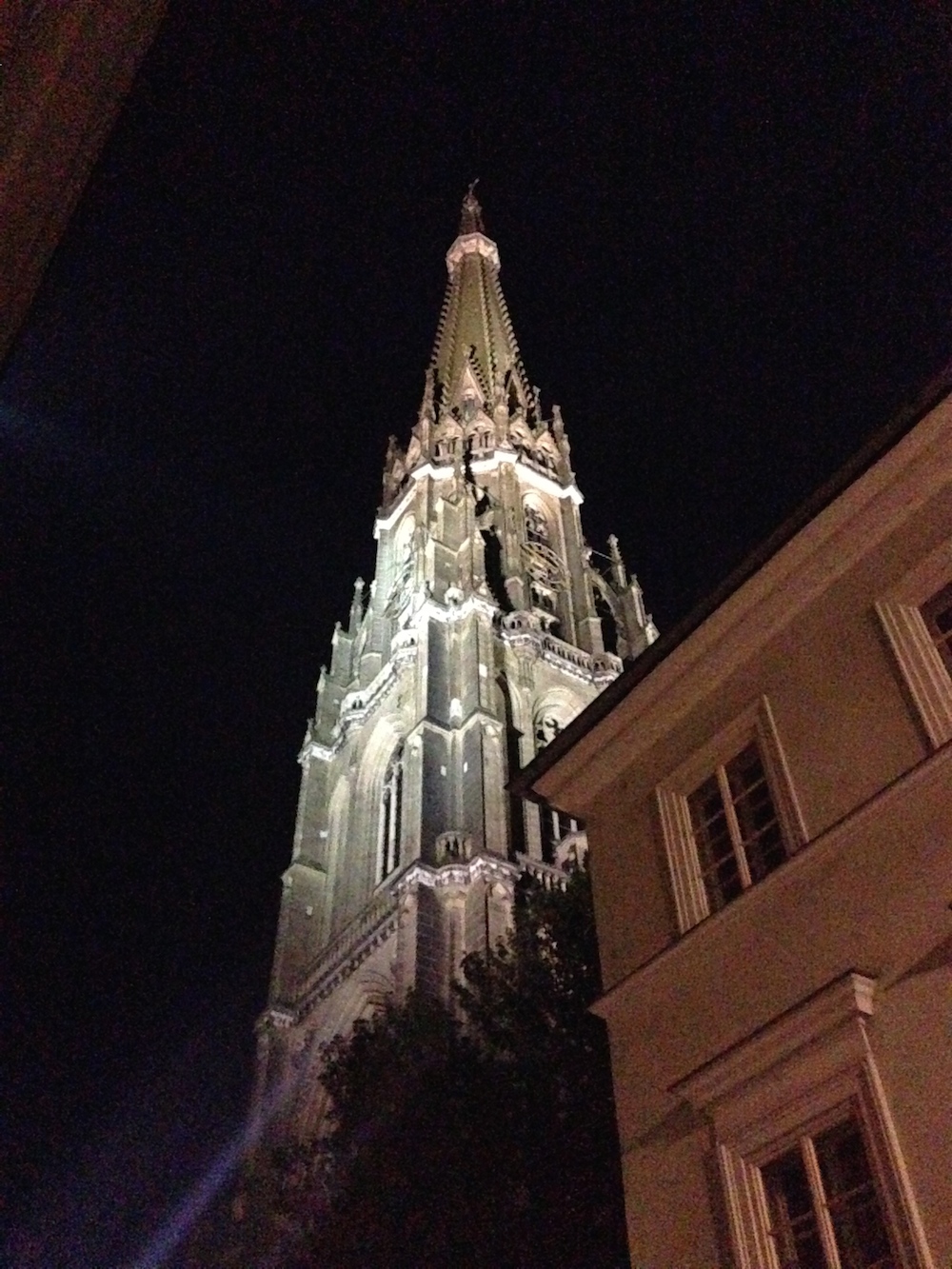 The next day we attended the conference, which was at Johannes Kepler University. We had to grab a quick bite to eat, and found a kiosk just outside the Universität stop. It had pretty cheap schnitzel, so we thought we'd give it a go. 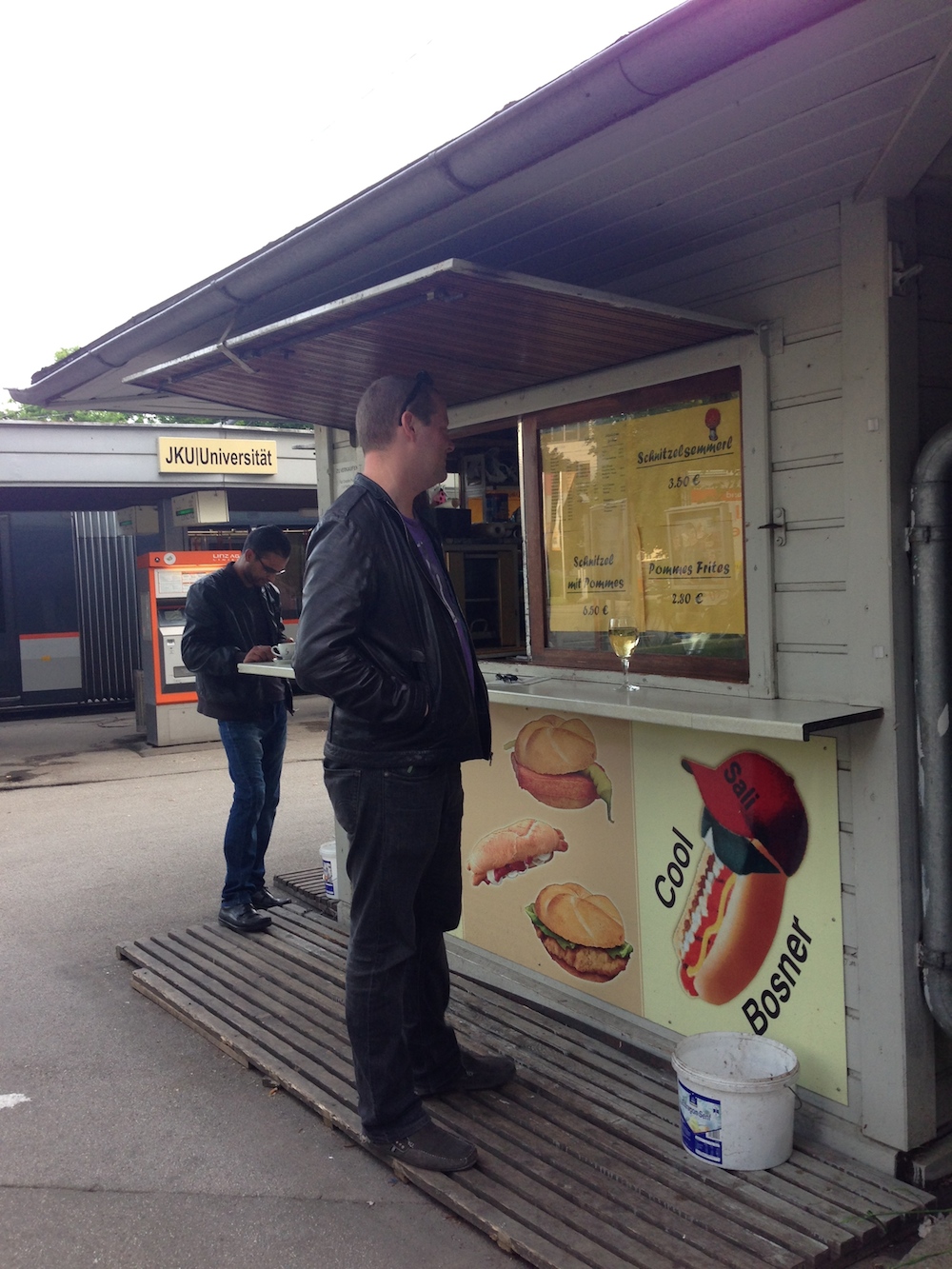 The kiosk (yes, it served wine)

It looked super-sketchy and we weren't quite sure what to make of it. You ordered at the window, then you stood at a ledge and ate. Hampton ordered schnitzel. We expected the guy to reach down into a freezer and throw some partially-thawed thing into a deep-fat fryer. However, he got out a fresh chicken breast, beat it with a mallet, put it in an egg-bath, etc. It was the tastiest schnitzel we had while in Austria. 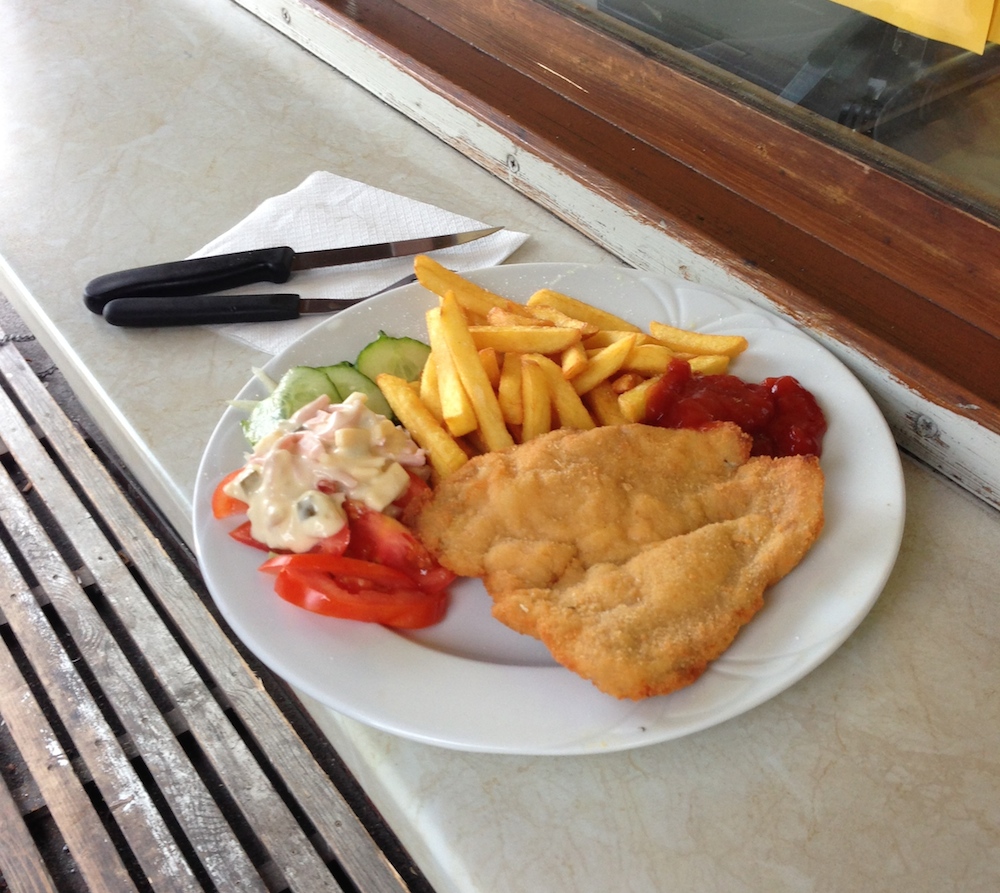 It was a little strange standing up to eat, but the food was totally worth it.

After watching Eurovision (go Conchita!), the next day we took a train to Vienna. That'll be in the next post.