Street Art in the Butte-aux-Cailles, Paris

Our first major stop in Europe has been Paris. We're staying in an area new to us: la Butte-aux-Cailles. It's in the 13th arrondissement of Paris, in the south-east of the city.

The neighbourhood has a small-town feel, and isn't touristy at all. I've only encountered other English-speakers when I've left the area. It's fairly easy to get to other places, as the nearby Place d'Italie has a number of lines from its Métro stop.

There are a decent number of bars, cafés and restaurants on the main street. From about 6pm to midnight, they're packed with people – so much so, that there's often a crowd spilling out onto the street. It's a little strange for a neighbourhood that's fairly quiet the rest of the time.

Anyway, the thing that struck me the most about the area was that it seems to have a large amount of street art (apparently Paris is becoming the "center of street art"). Every wall seems to have something beautiful or provocative on it.

The most famous (as far as I can tell) street art in the area is done by Sampsa, the "Finnish Banksy." 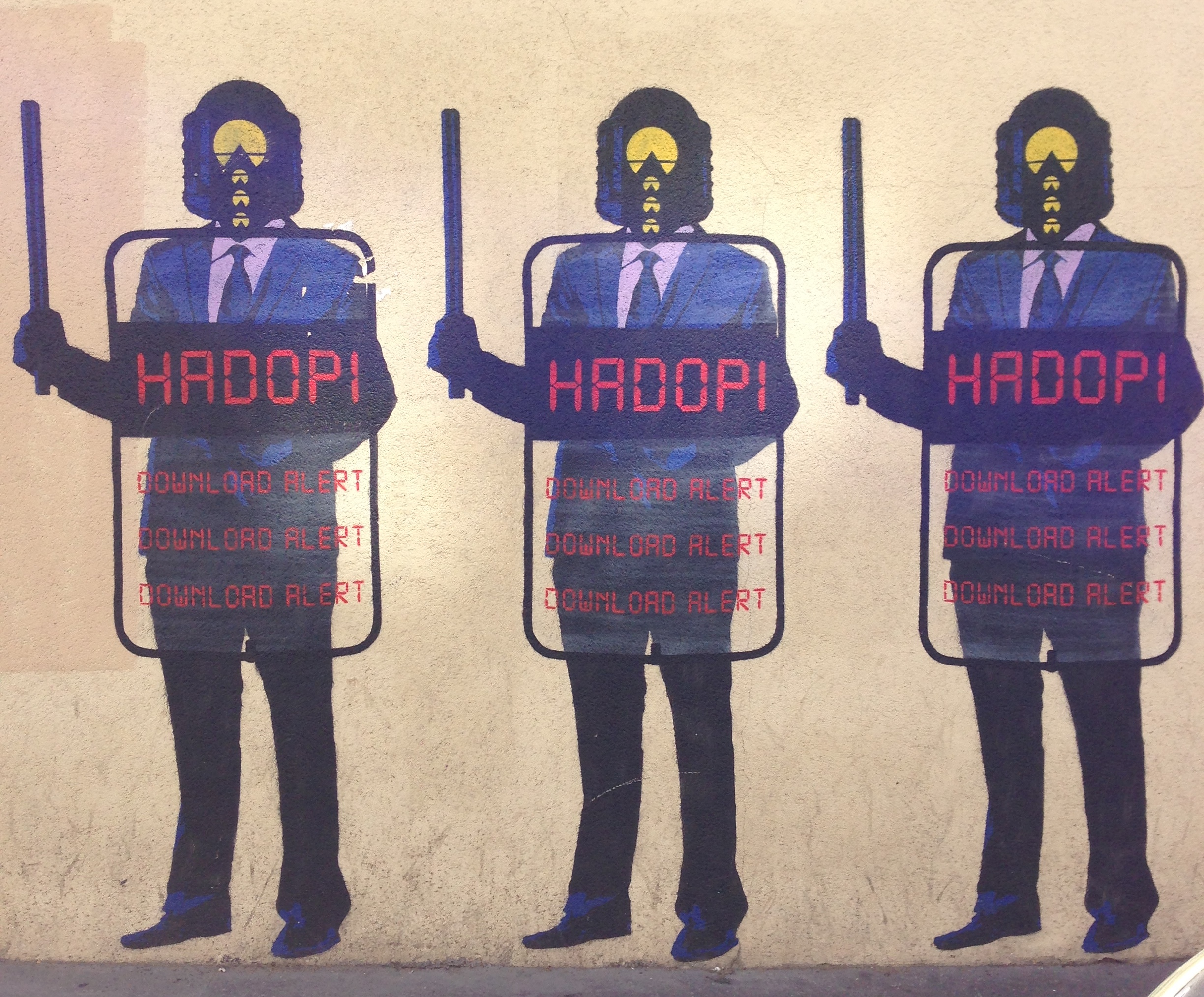 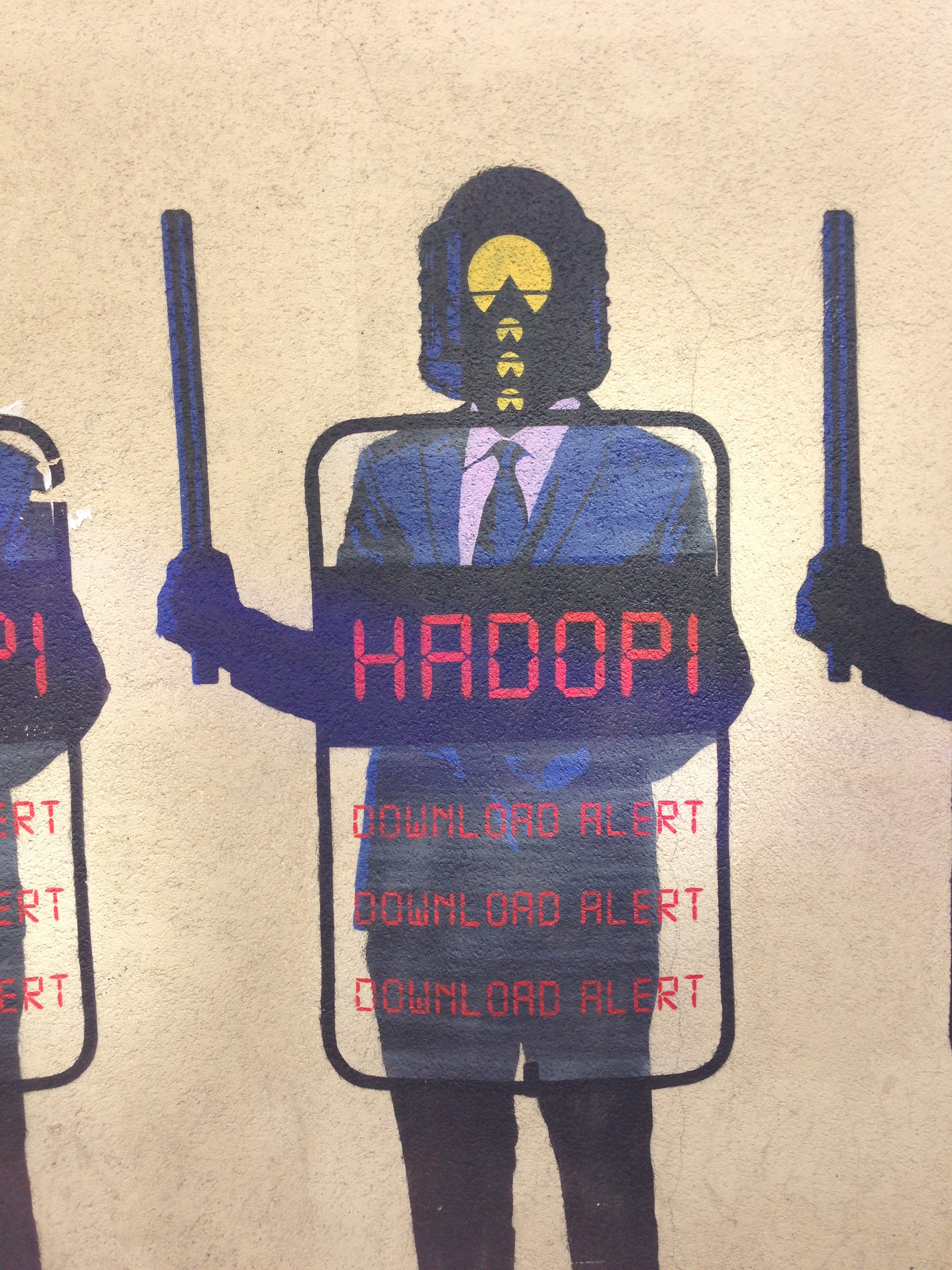 Close-up of a HADOPI enforcer

The two pieces by Sampsa were in protest of the HADOPI law – a copyright infringement law from around 2009. Amusingly, the first logo for the HADOPI agency used a typeface without appropriate licensing.

The mosquito art was censored for a while – removing the "Blood sucking HADOPI" line. But apparently it has been recently restored.

There are a bunch artworks done in mostly muted blues and greys. They're all of children. At first glance, they're kind of peaceful.

However when I started to study them there was something unnerving about them. The children never had faces. 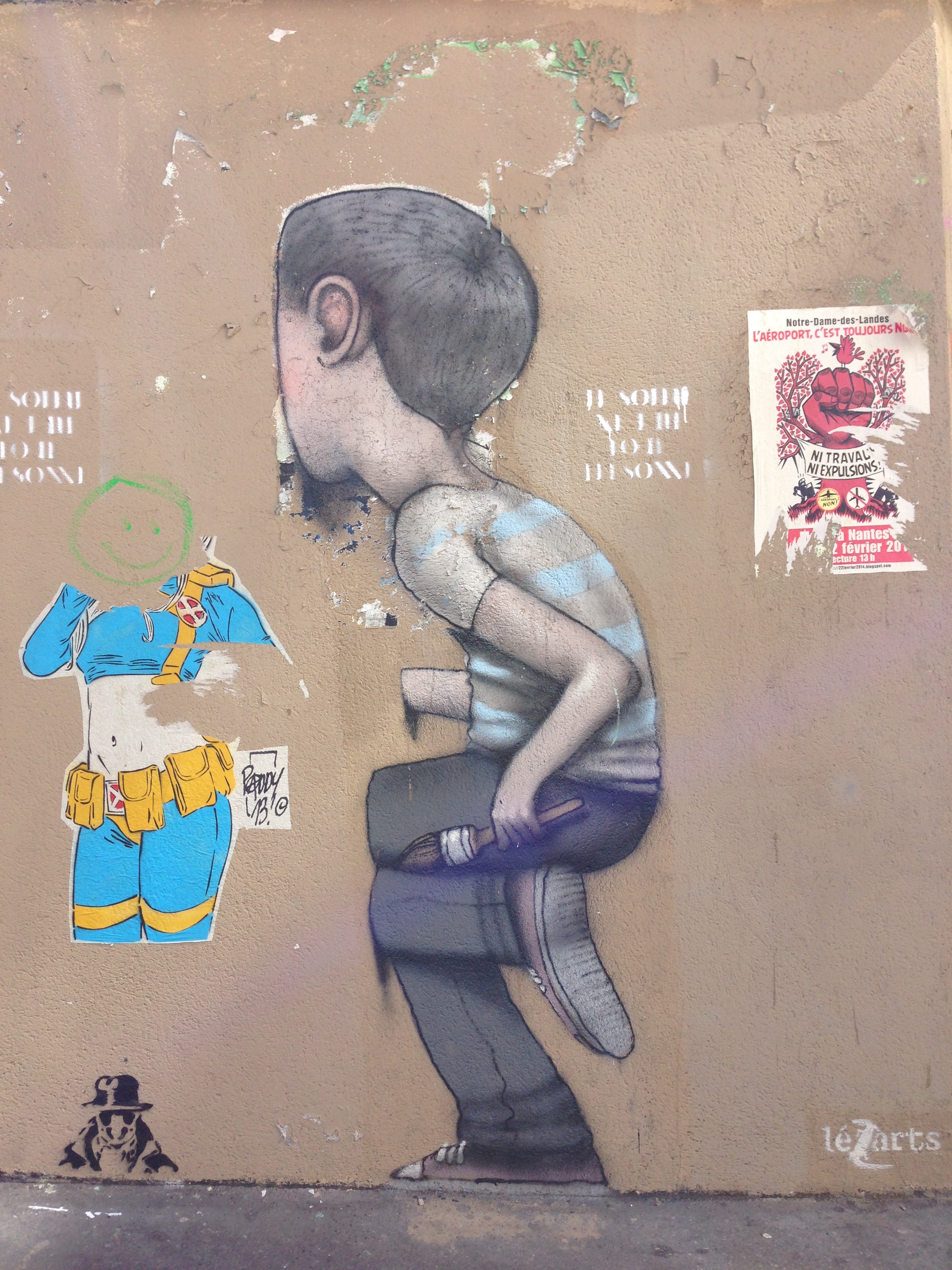 As well as the lack of faces, the children are usually disappearing. They're walking through a waterfall or curtain into another world. Or they're being partially submerged. They're a little eerie. 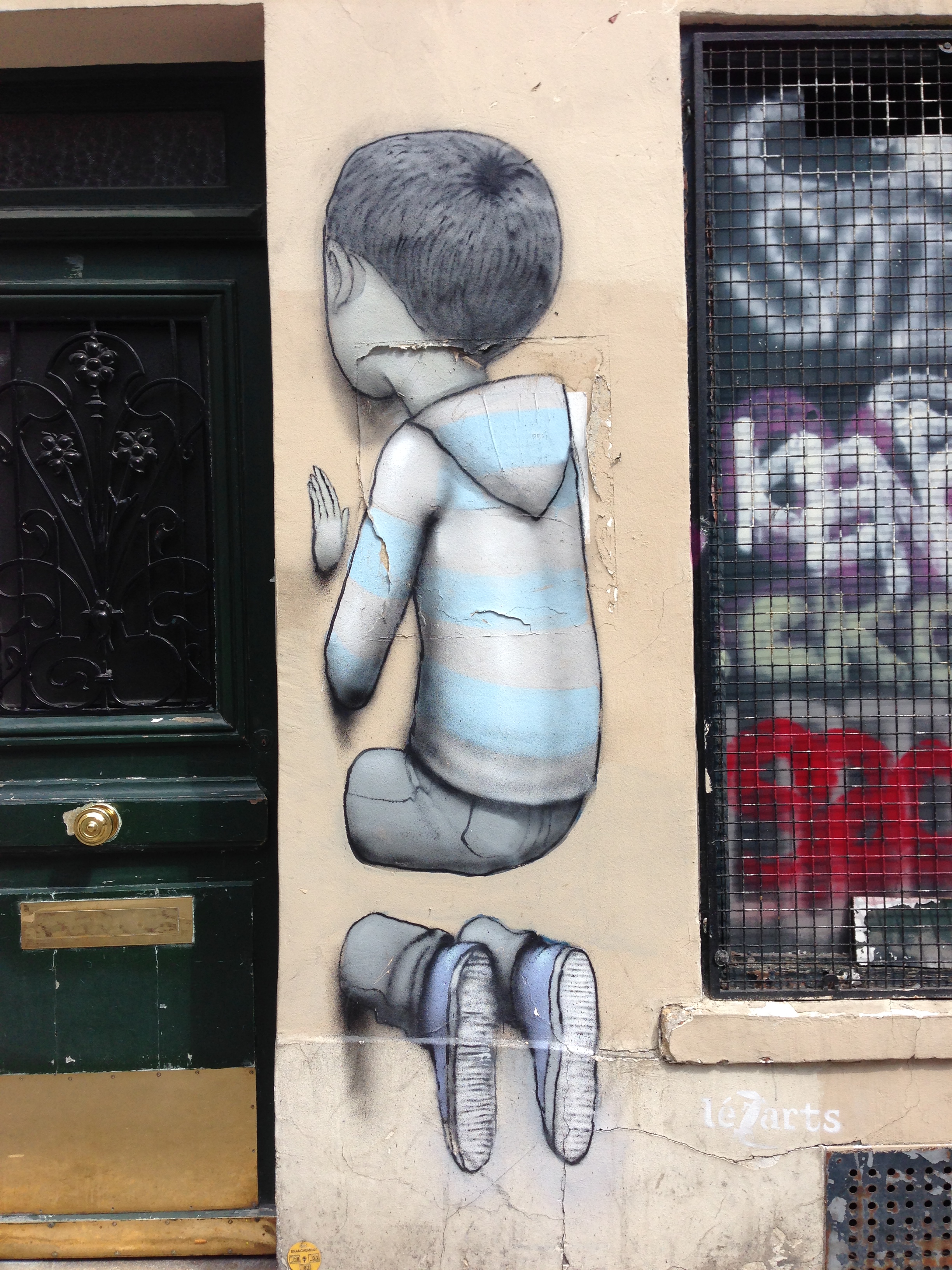 Miss.tic is another artist with a lot of works in the area. According to her biography page, she's almost 60 years old. She has a bunch of stencils that tend to be of provocatively-posed ladies with humourous or ironic captions.

I've done my best to translate the captions, but they'll no doubt be a little off. If anyone wants to correct me, please do! 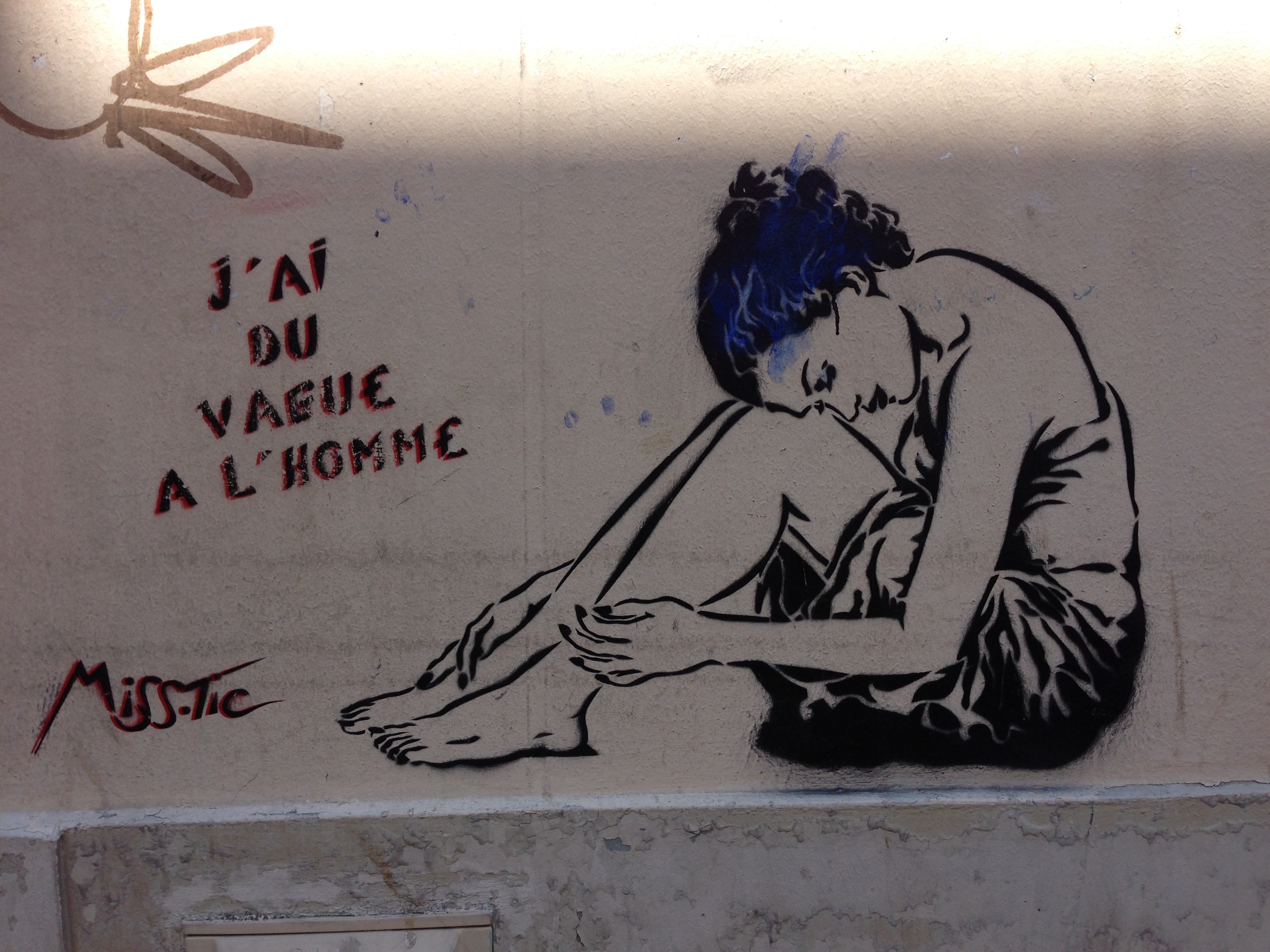 "I have men-ancholy" (I think it's a pun on "avoir du vague à l'âme," meaning "to be melancholy")

"Abuse of pleasure is great for your health"

Miss.tic doesn't only do scantily-clad ladies, though. 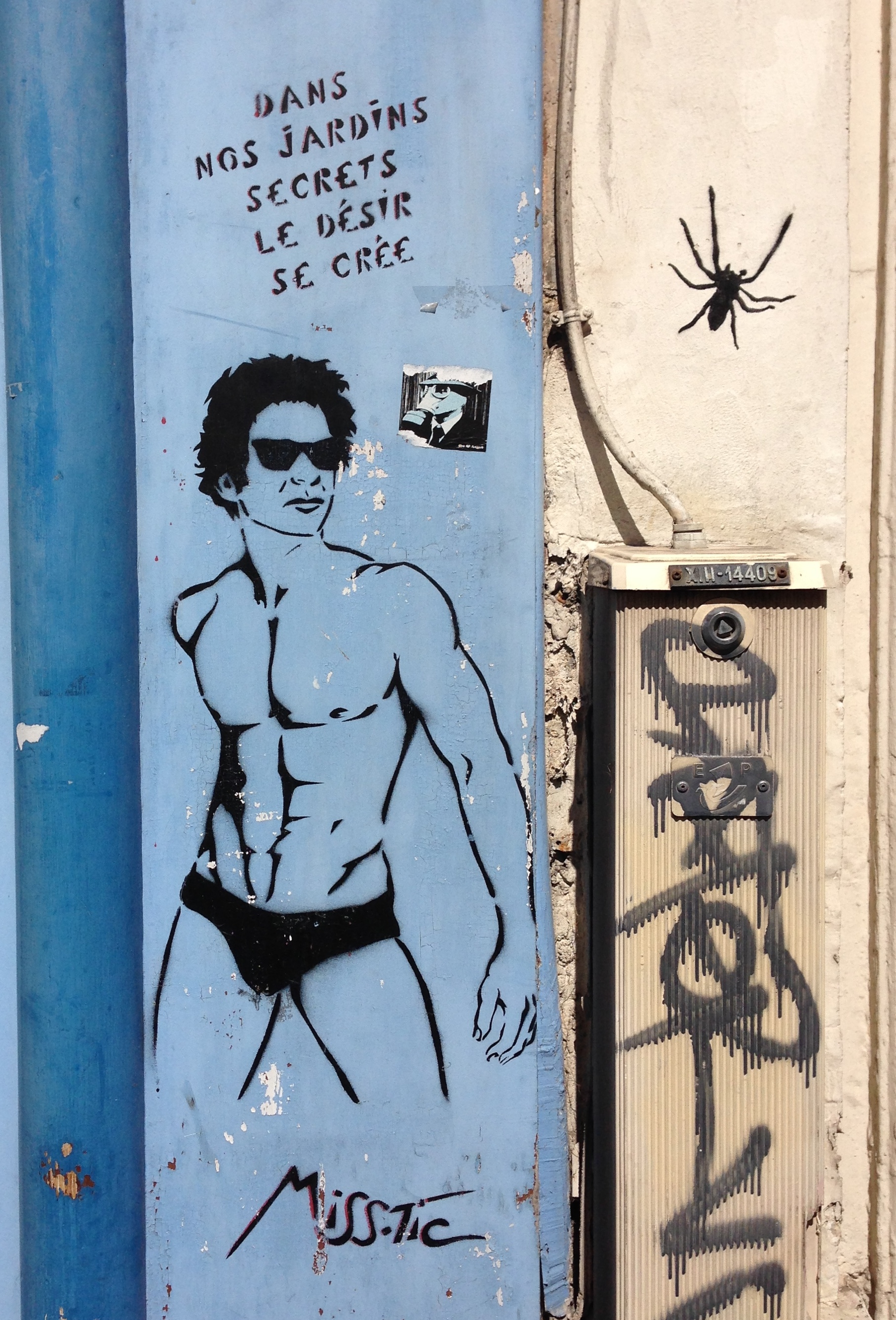 "In our secret gardens, desire is created"

There are a couple of sculptures by the Italian street art group UrbanSolid. 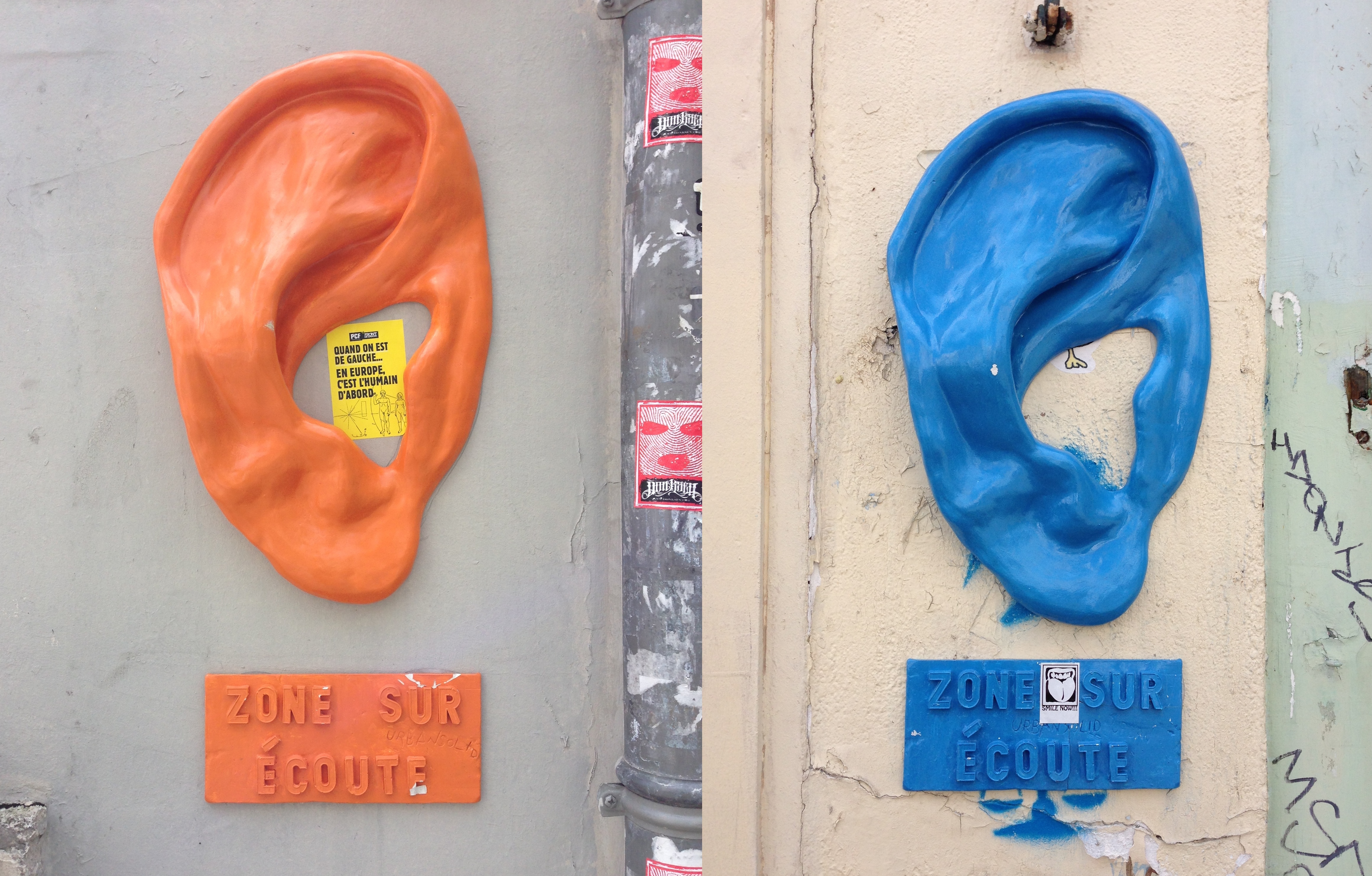 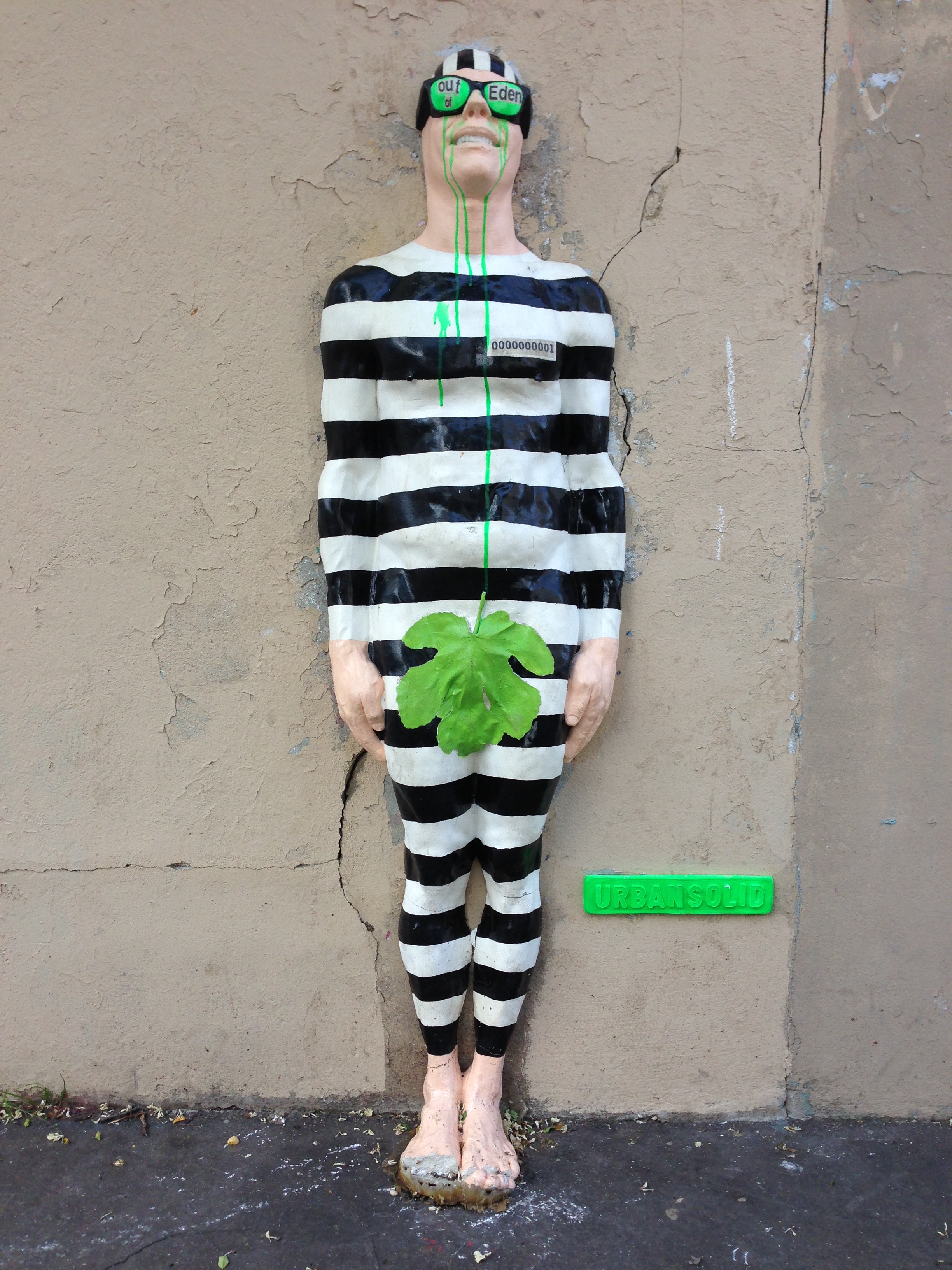 I liked these, although the prisoner is just around a tight corner, and at night I keep thinking there's a person waiting there. It's a little creepy.

There are a few pieces by Jana und JS. They have a nice style, and do work in a number of European cities. I like their focus on photography/photographers, who appear in a lot of their works. 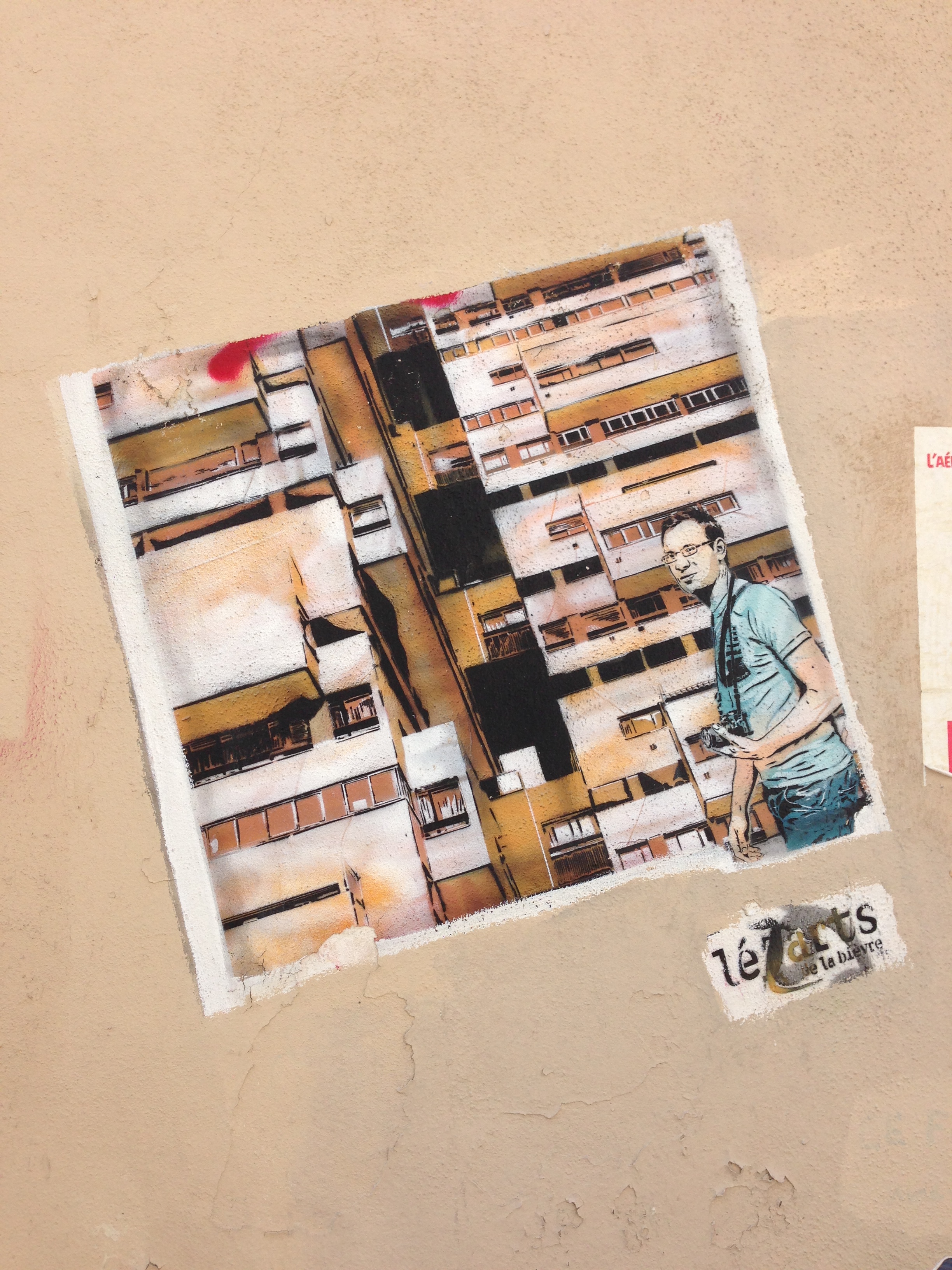 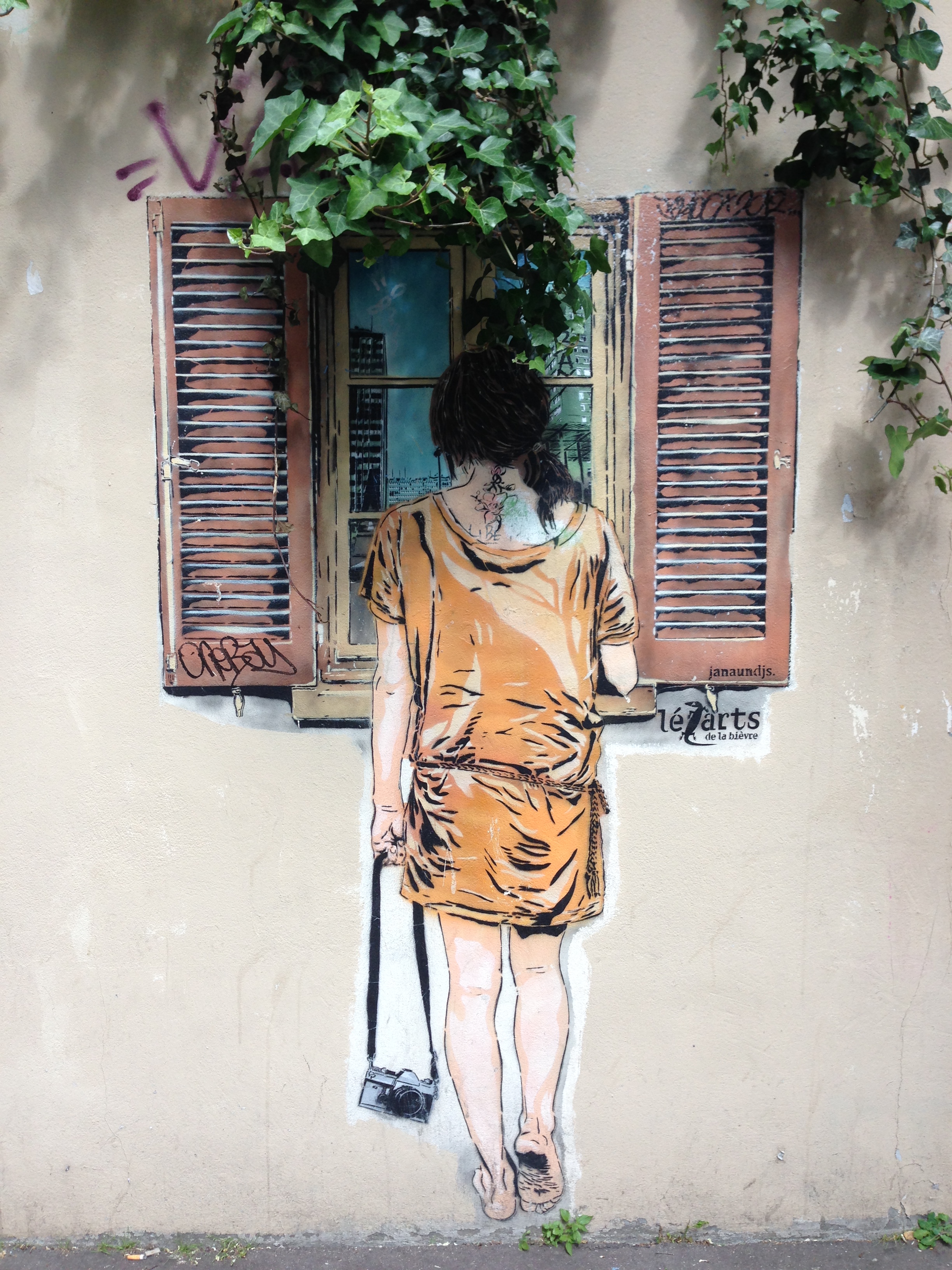 You may have noticed a small gecko logo next to a lot of the art. I'm not 100% sure what the symbol is for – looking up the Lézarts de la Bièvre, it seems to be some kind of art event held in June, with a focus on street artists.

Finally, here's a bunch of other neat stuff I saw that seemed to be one-offs by artists (at least, one-offs for this area). 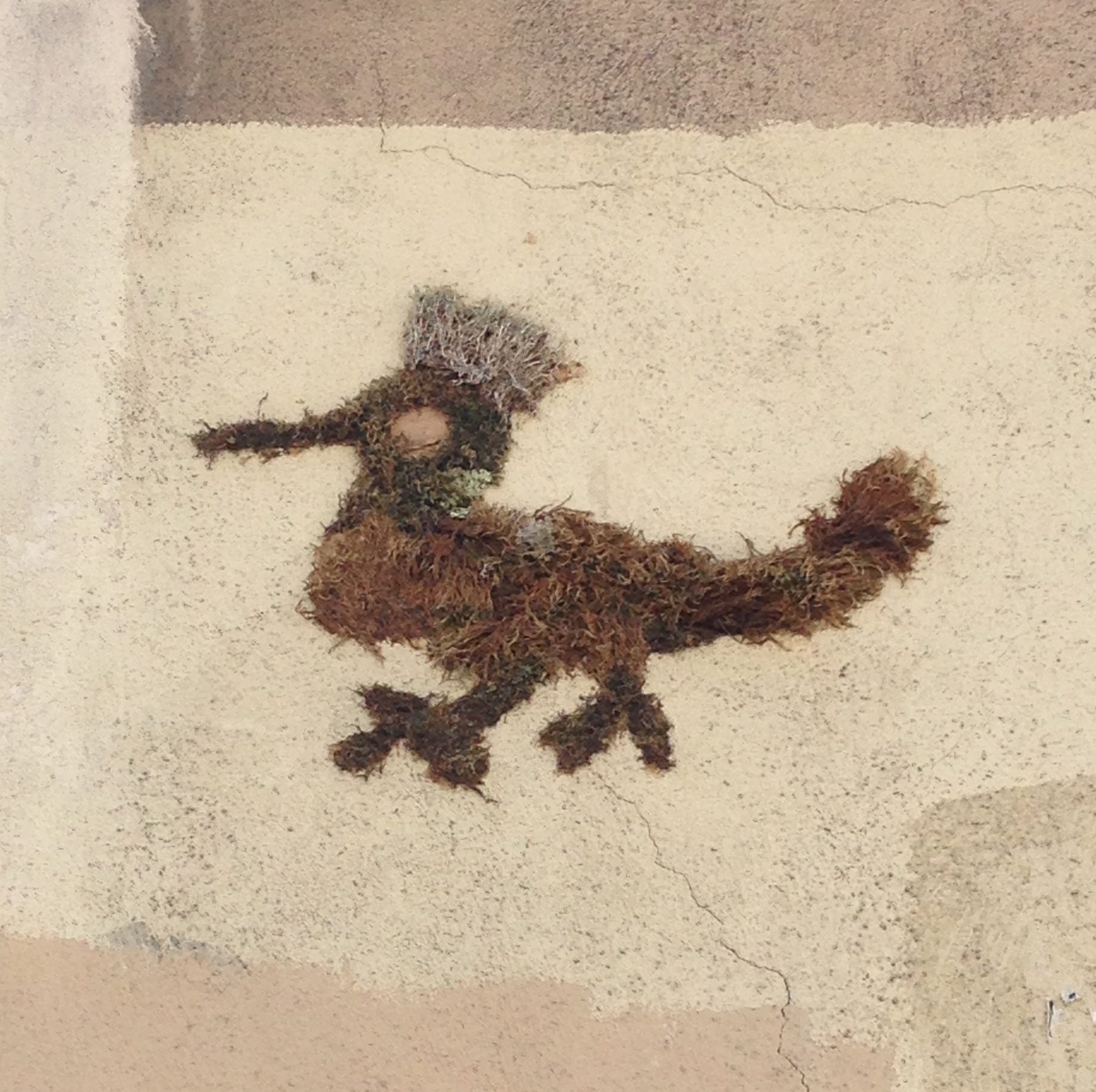 Looks like something for Day of the Dead (by Bunny M) 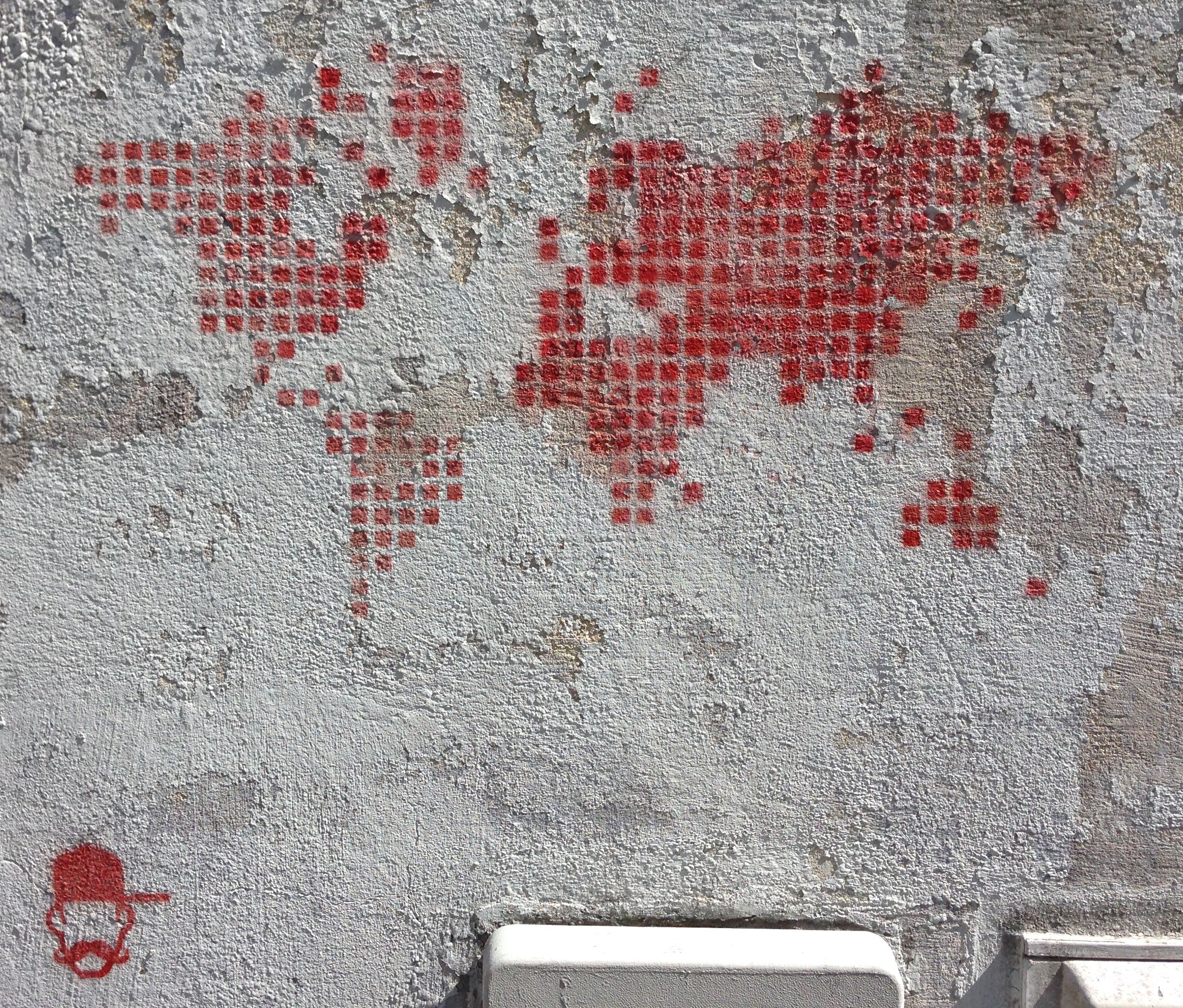 Anyway, I google-mapped (Is "google-map" a verb? It is now, I guess) the route I took. It starts and ends at Place d'Italie, in case you're arriving by Métro, and takes about 30 minutes. Of course, just wandering around the neighbourhood – especially on a Sunday morning, when it's super-quiet – is nice too.

We're leaving this area in the next couple of days to move to a hotel for La Conf. After that, it's off to Málaga to meet my family.