We are in London for a few nights and squeezing in as many activities as possible. Obviously, a major focus of this was drinking. Finding cocktails here is pretty easy compared with continental Europe – within a few blocks of where we're staying there's Happiness Forgets and Callooh Callay, both excellent cocktail bars.

However, I was most excited about visiting Nightjar. We were recommended it by a friend in San Francisco. The menu online looked interesting, so I booked a table. There's no standing in the bar, and you have to have a table to get service. I booked about four days before, on a Tuesday, and could only get a table at 6pm.

It's behind an unassuming door just near Old Street underground station. The bouncer checks your name against a list, and sends you downstairs. After being in the daylight, heading down a candle-lit staircase was a little disorienting. At the bottom of the stairs, the maitre d' (is that even what they're called in a cocktail bar?) welcomed us and sat us down at a small table next to a cabinet of old liqueuers. 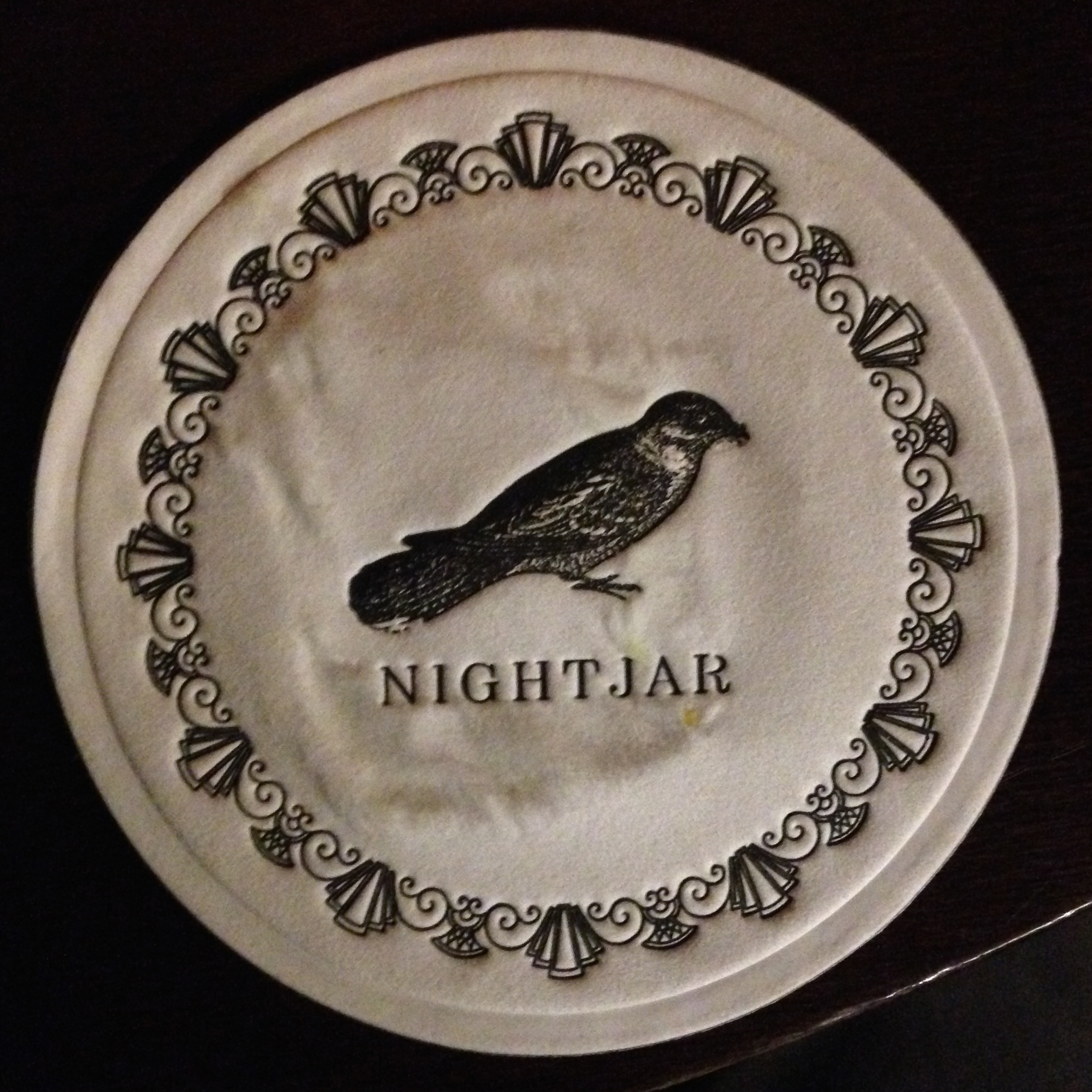 The menu had an incredible cover, with the Nightjar appearing on it multiple times. Throughout the night the silhouette of the bird was a recurring theme – punched into lemon-rinds or branded on the side of a mug. 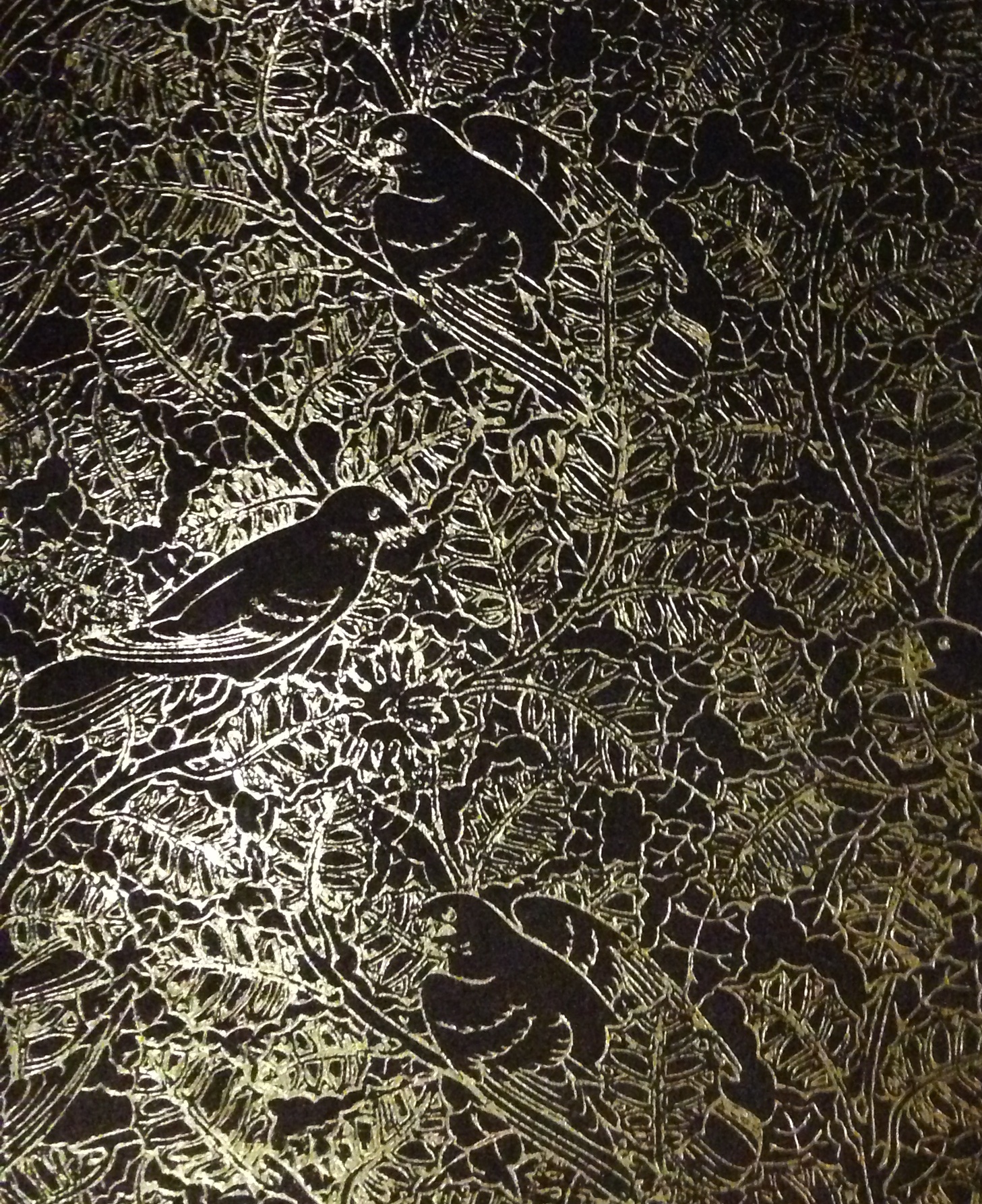 The menu was extensive, sorted by pre-prohibition, prohibition, post-war and signature drinks. Most of the cocktails had at least one ingredient I'd never heard of. It took us a while to decide what to go for, but the bartender was helpful in pointing you towards certain things. With her help, I chose the New Orleans Daisy as it had chartreuse in it – but the bartender suggested I take it with gin. Turns out it comes in an owl-shaped container with a candied hibiscus flower and a peacock feather. 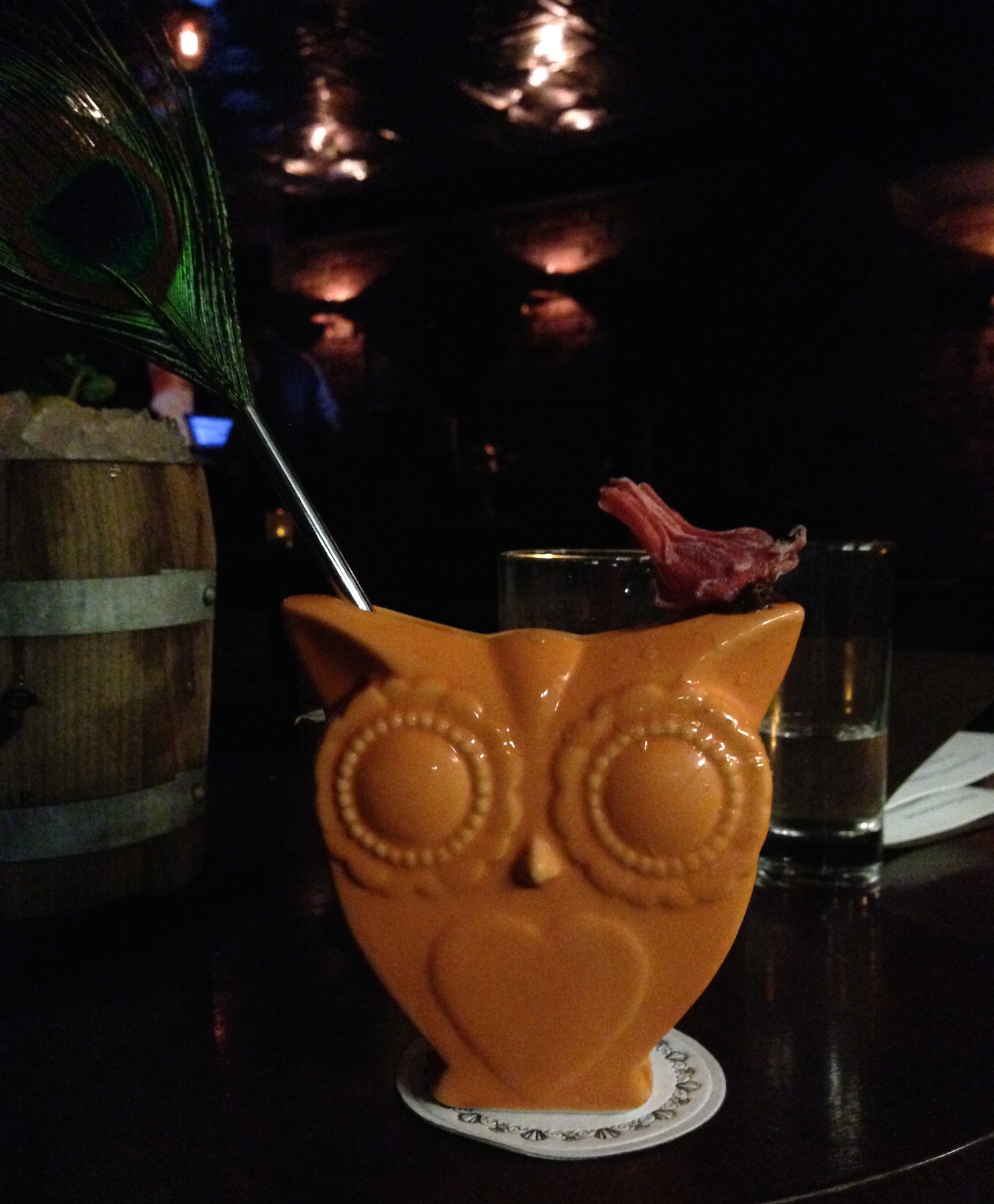 It was really quite incredible. It had an almost buttery flavour with a nectar aftertaste.

Our friend went for the London Mule. The picture below doesn't quite convey the size of the mug: it was probably about 12 inches high. Most of that was packed ice. It was a great interpretation of the mule-style of drink.

Hampton got a Toronto, which was similar to an Old Fashioned but with maple syrup as the sweetener. Its garnish was a candy-floss nest with some mini-eggs in it. 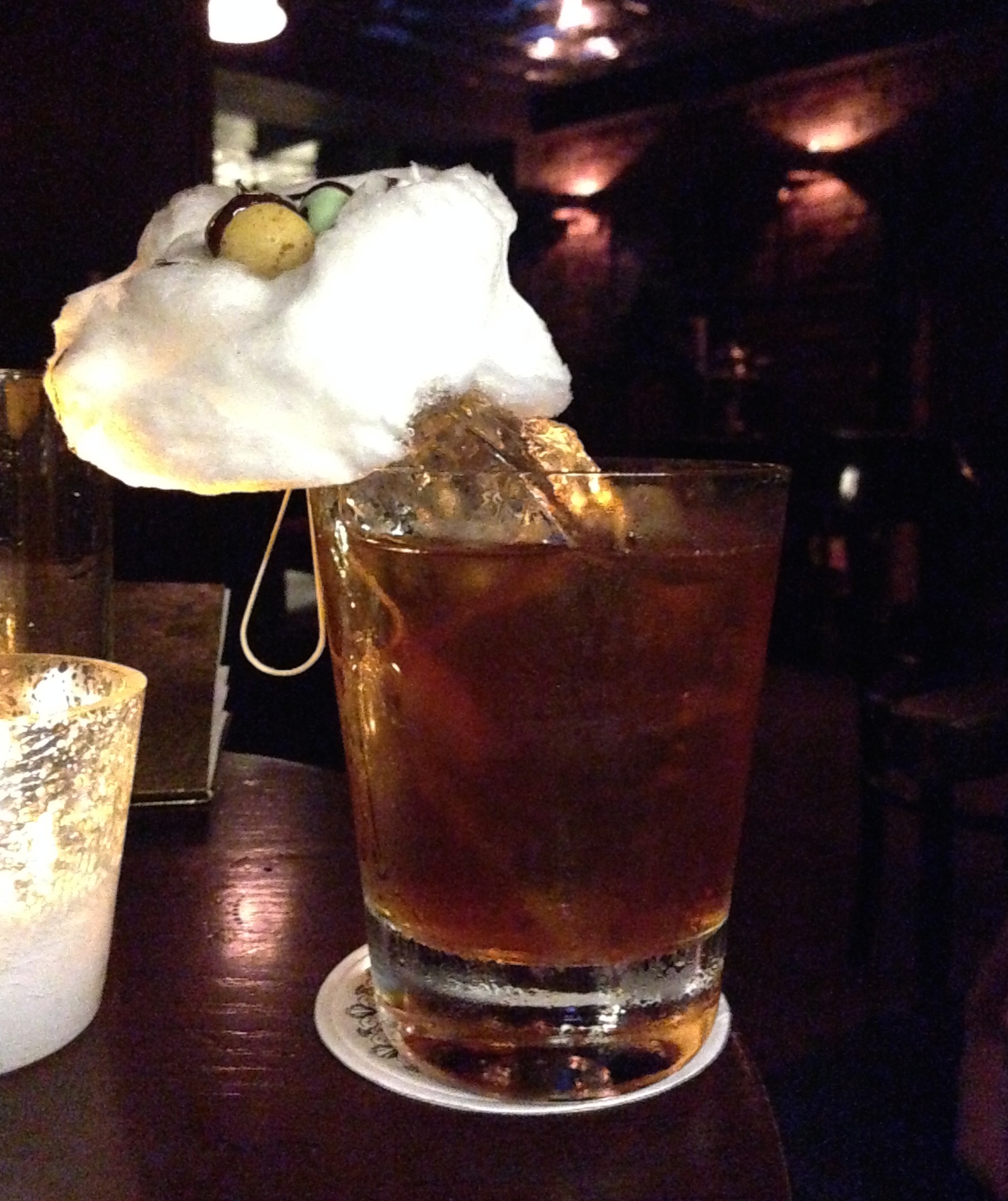 I noticed another table received a cocktail in some sort of two-neck condensing flask. I asked what it was, and it's called the Forager's Shrub. Of course I went for that next. 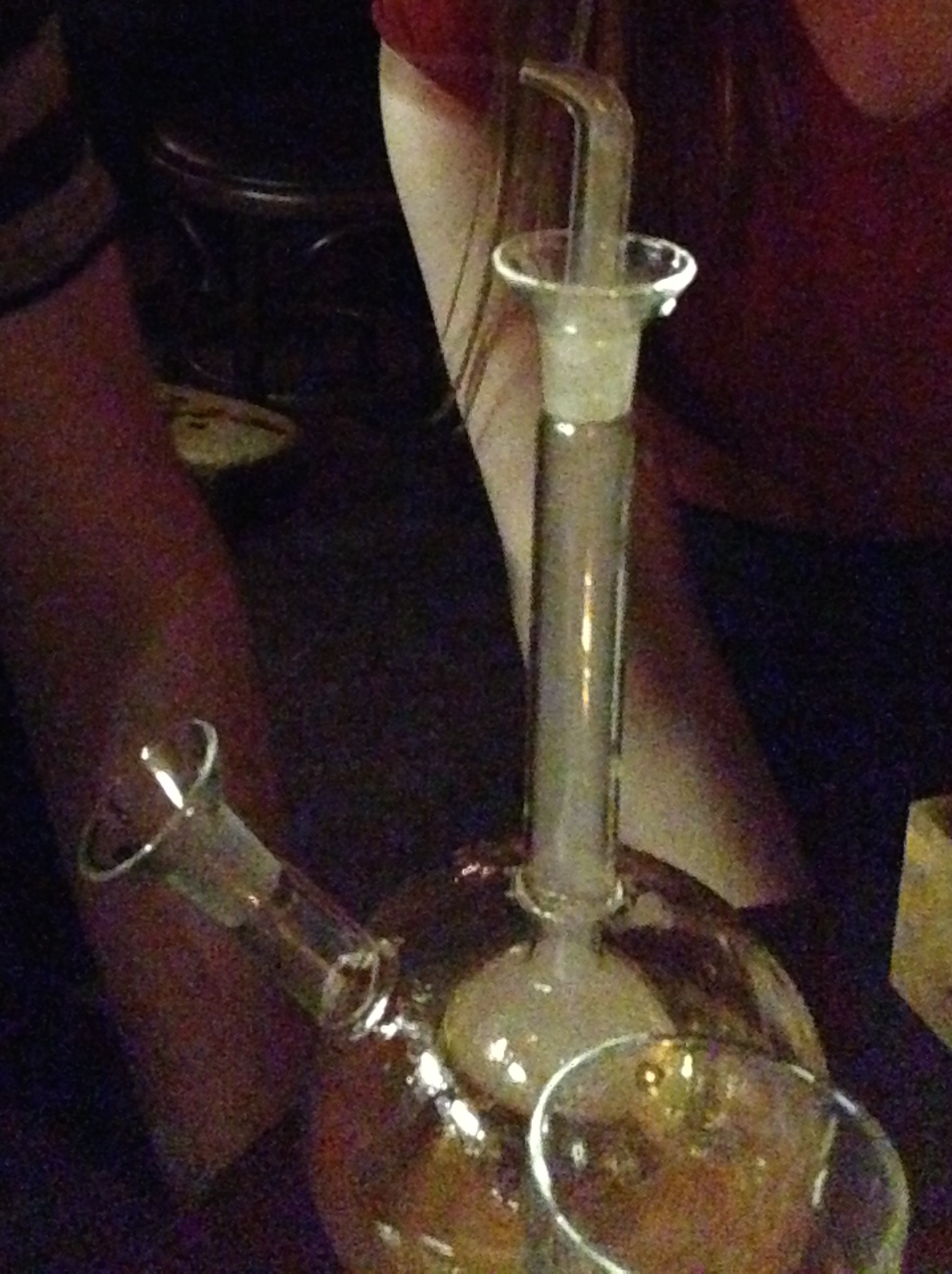 The cocktail itself was in the bigger bulb. In the internal, smaller bulb was an oil with some dry ice (I think). It produced a vapour which I was instructed to smell. It smelt of pine and nettles, like a forest after some rain. 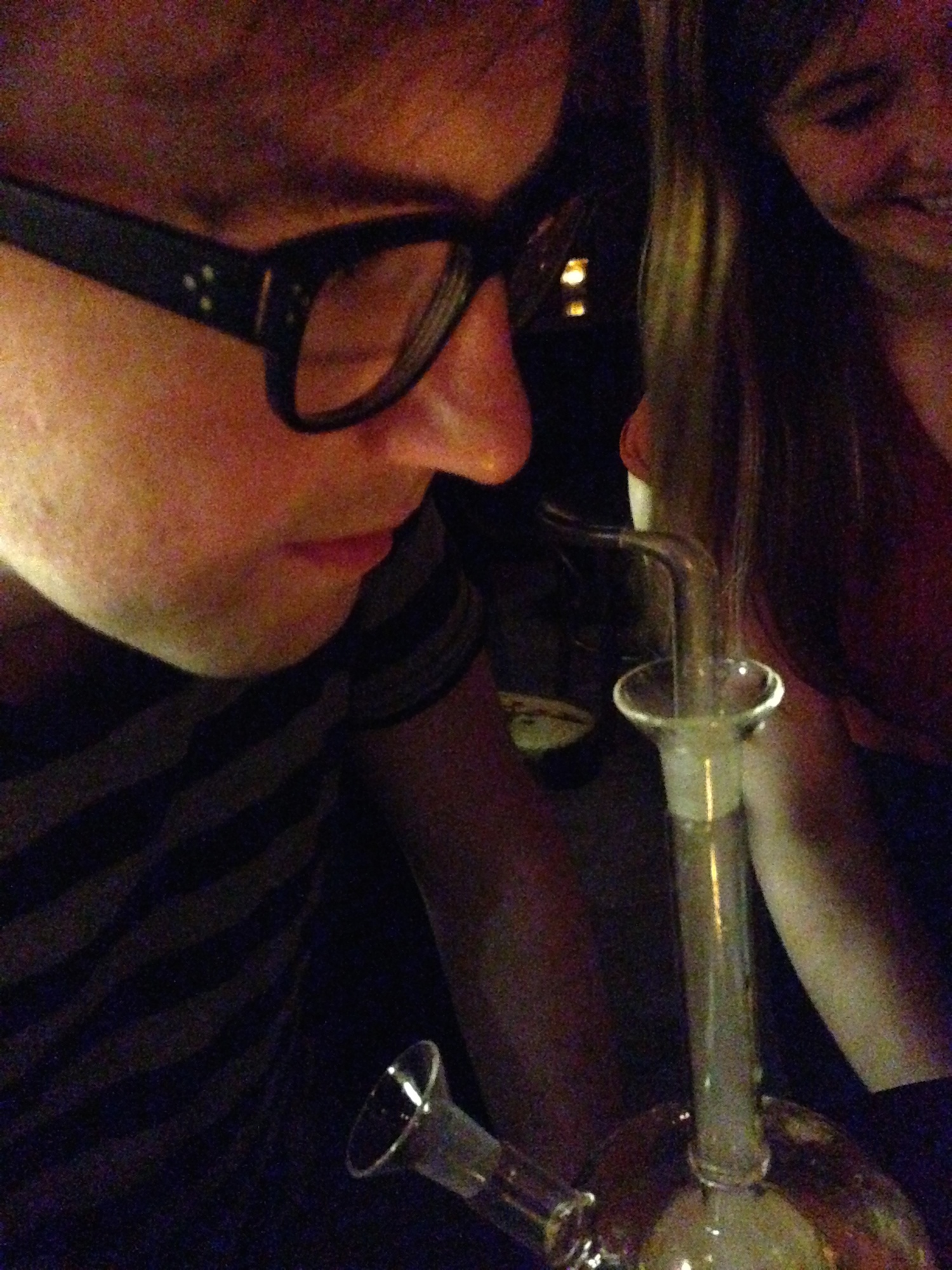 The bartender then poured the drink out – the fragrant oil into a chalice and the drink itself into a tumbler with ice. I was instructed to smell the oils before drinking. Sure, it was fairly pretentious but here's the thing – the smell really did make it taste different. And the cocktail was amazing, so I didn't care if I looked like a wally taking a big huff before every sip. 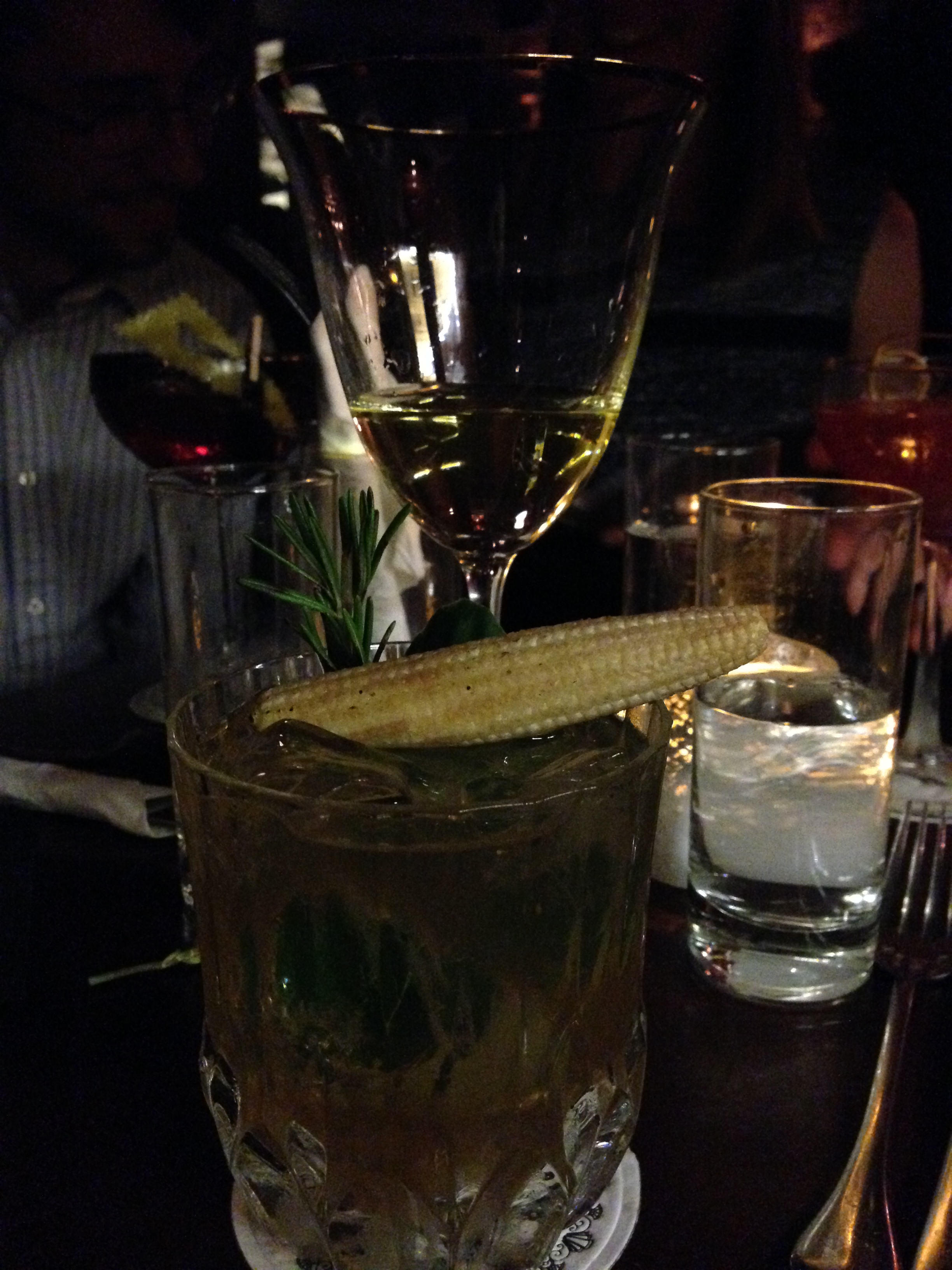 The final cocktail (yes that's a mini corn on the cob)

My last drink was a Marmalade Nº 2. It tasted exactly like a Seville orange marmalade – acidic, bitter, bursting with orange flavour. I loved it. 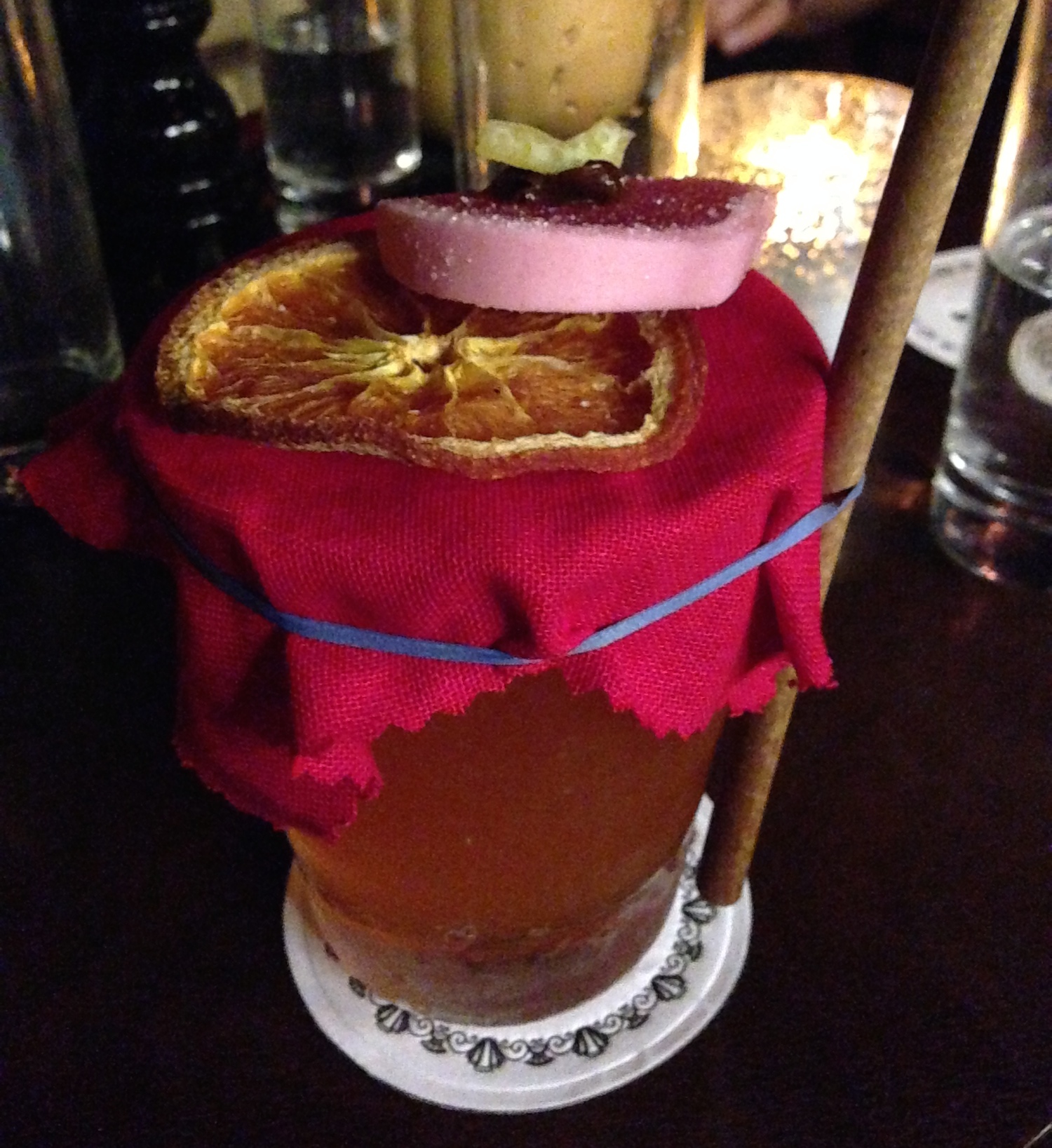 Other drinks we had but I didn't take pictures of:

The cocktails weren't too expensive – between £8 and £12 was the average. Considering that such care went into not only the flavours, but also the decoration and presentation, I found it to be a worthwhile treat.

Nightjar serves innovative cocktails in both taste and presentation. I can see Hampton and I coming back here whenever we're in London.