We've been in Prague for just over a quarter of our month-long stay. So far, it's treated us well. I'll write a longer post about thoughts on Prague (and the Czech Republic) later on, but first to more important things: cocktails.

Due to other European cities lacking decent cocktail bars, we didn't have high hopes for Prague. Although we eventually found some in Paris, that was after a fair bit of research and travelling to the other side of the city. Would Prague be any different? Additionally, the first thing anyone says about the Czech Republic is that you'll never want for beer – it's cheap, good quality, and plentiful. Was there any room for a good whiskey sour?

In short: yes. There are a surprising number of decent cocktail bars within five minutes' walk of our just-out-of-centre apartment. Most of them do standard cocktails as well as some of their own invention. So far, Hemingway Bar is probably my favourite.

It's on one of the narrow winding streets of Old Town, just off the river – so it makes for a nice walk, especially at dusk with the lights of the castle just coming on. 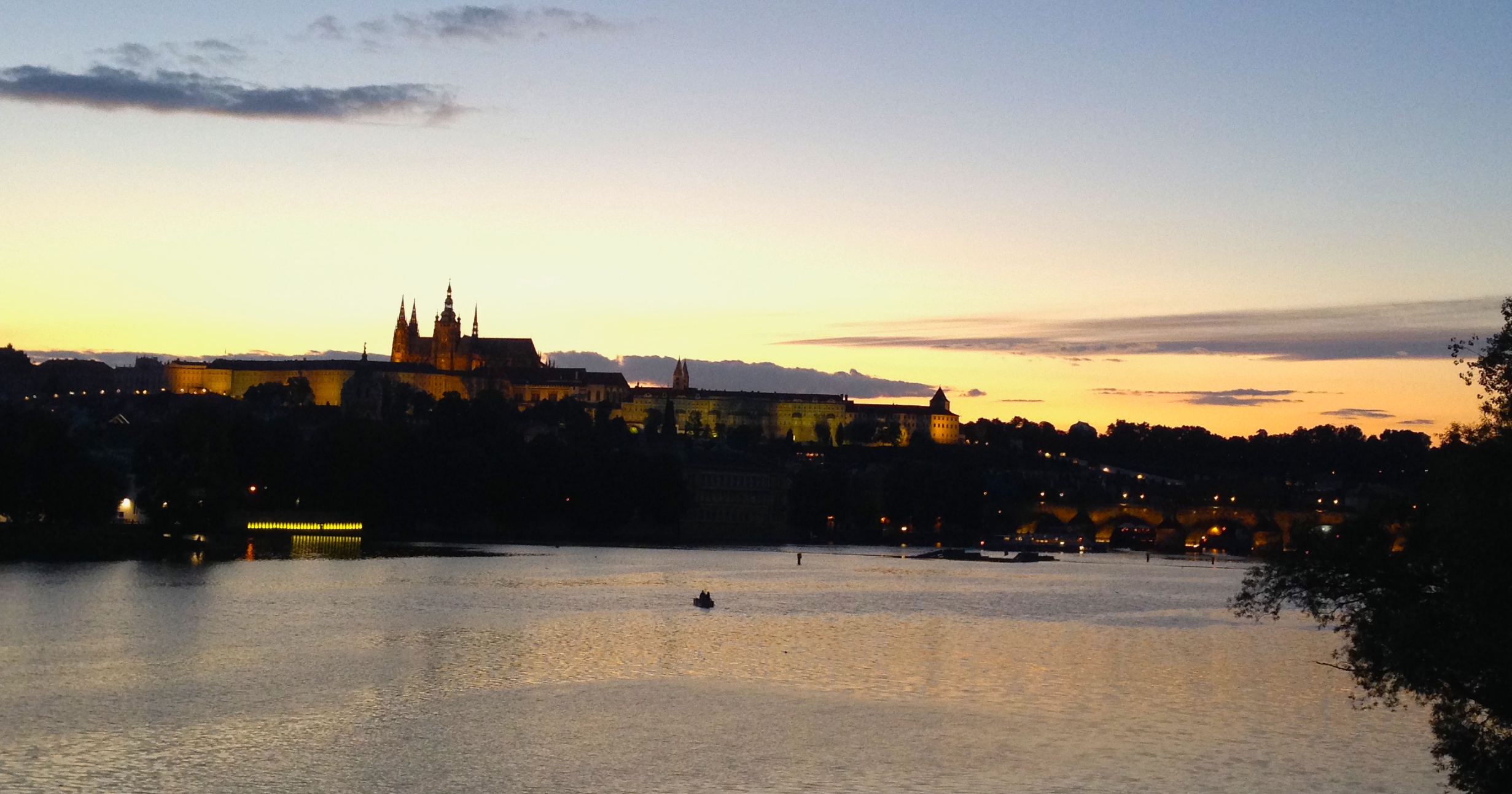 Sunset over the Vltava

The bar itself is cosy, with three or four small rooms spread over two floors. Pictures of Hemingway line all the walls, as do various drinking vessels – most of which seem to be actually used for drinks.

The best cocktail (and the one Hampton keeps going back to) is the Red Carpet. It's like an old fashioned/whiskey sour/manhattan mix-up. It's delicious and refreshing, especially on a hot day. Oh, and it comes served on a little square of red carpet. Cute. 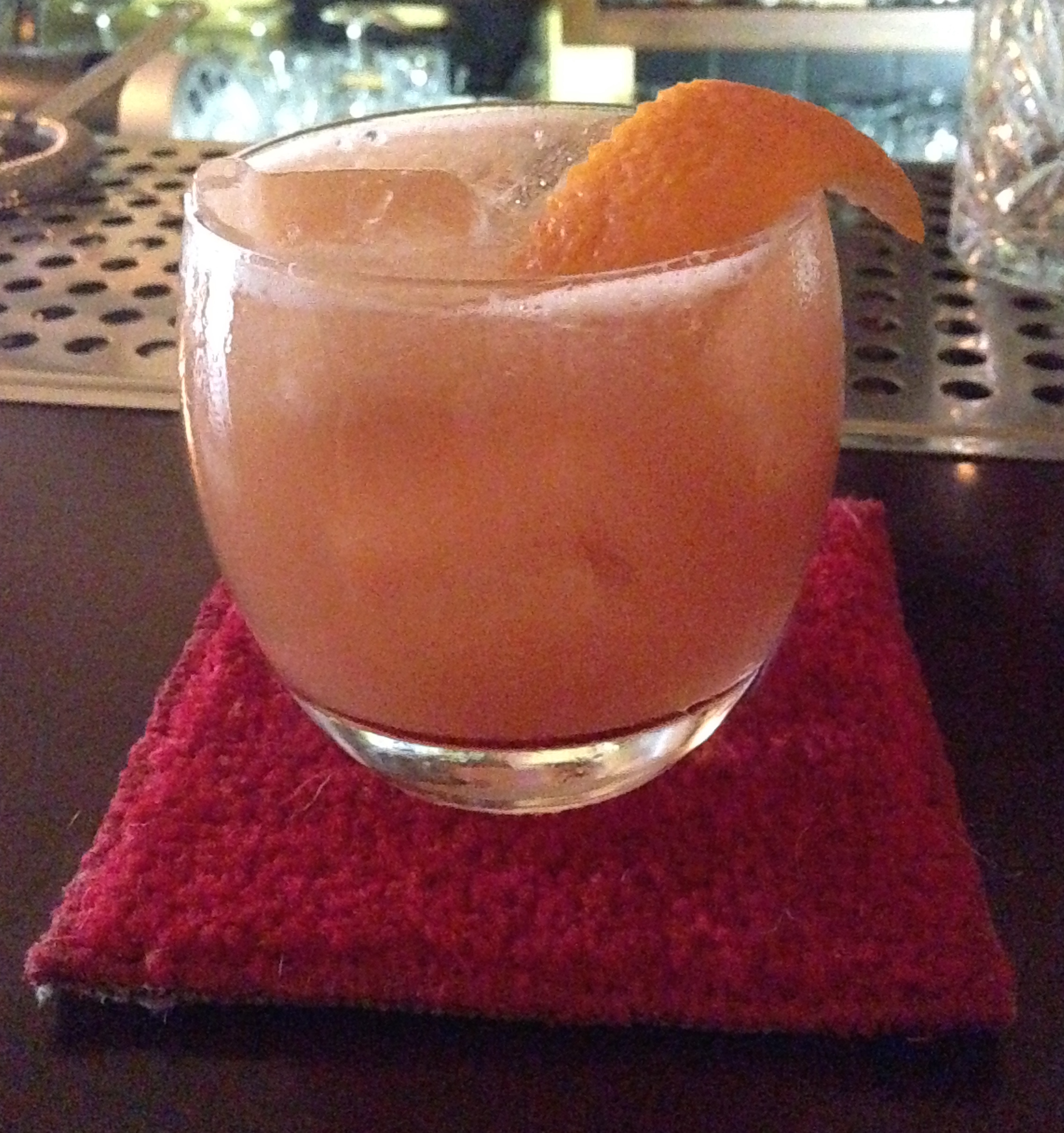 I had a gin-lillet cocktail that was also pretty refreshing (maybe it was just because it was 32ºC outside?). With a name like "Corpse Reviver," I thought I'd be getting something throat-burning, but it was really smooth. 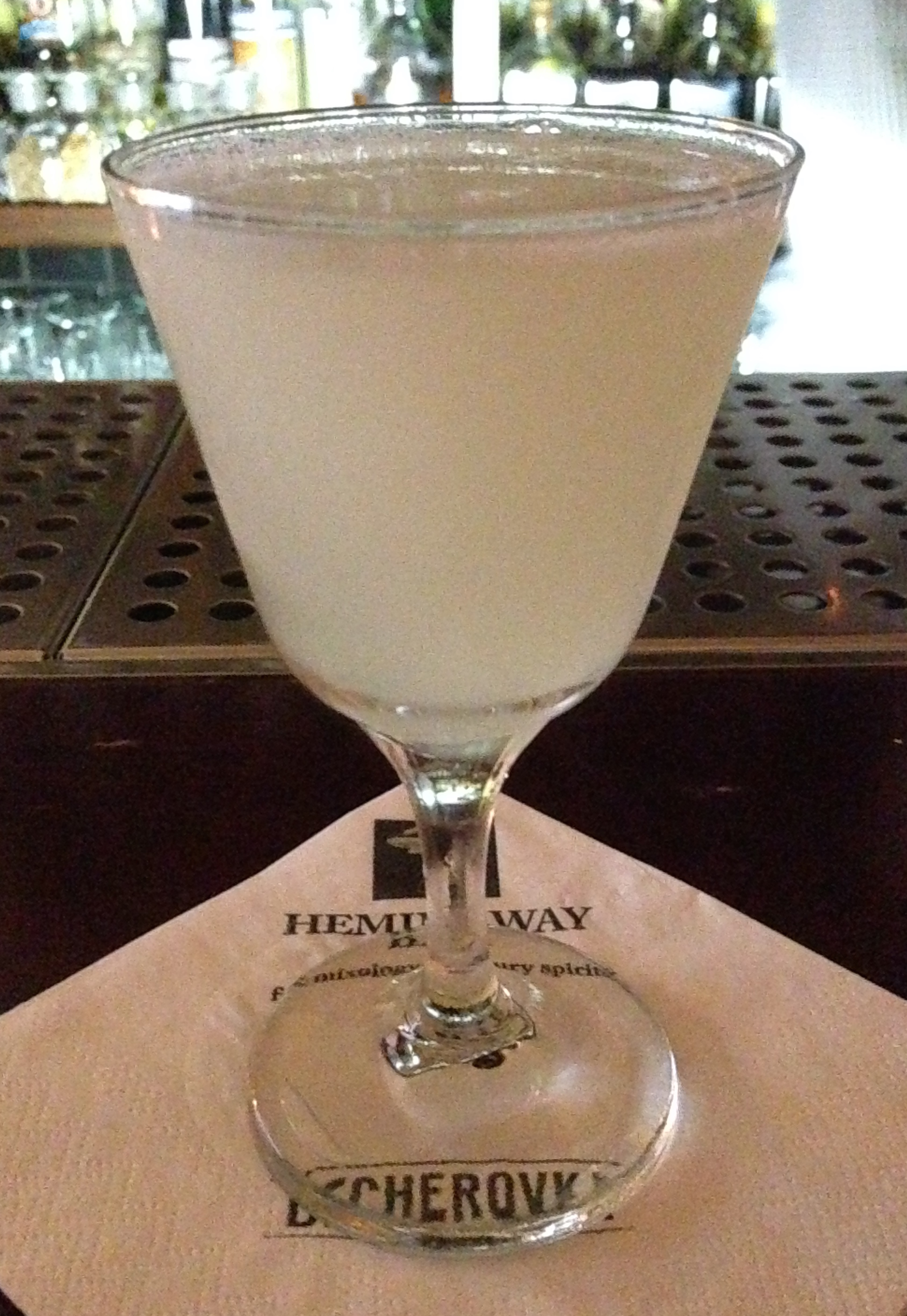 Next adorable drink: a martinez using Earl Grey-infused gin. It came in a teacup with a biscuit to nibble on. Perfect! 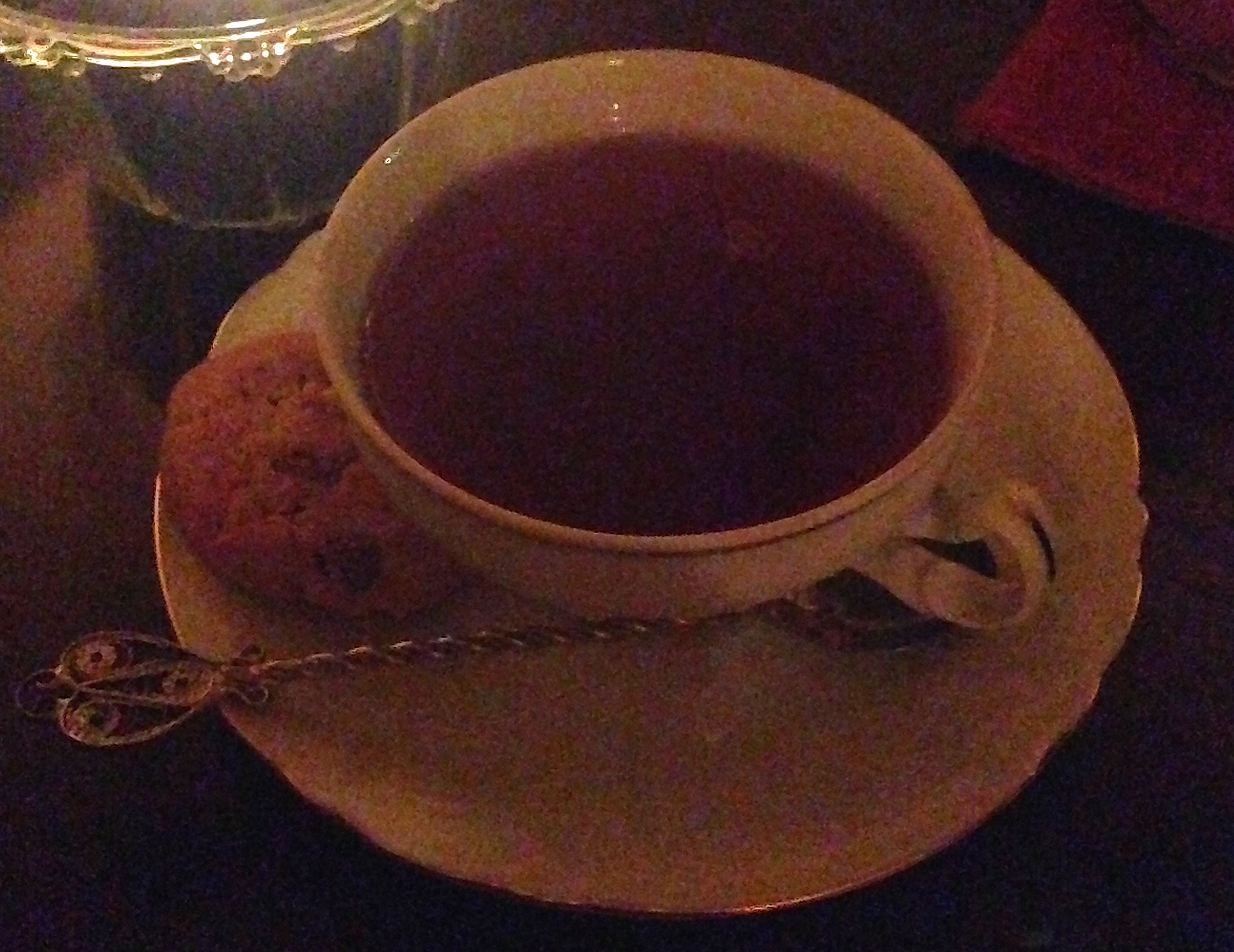 Hampton got the Nick Adams Penicilin, named after a character in a number of Hemingway's short stories. It came on a tray with a glass of ice, a small aspirin-shaped sweet, a bottle of lemon/honey/whisky, and an Erlenmeyer flask of 10-year malt whisky. We were instructed to pour the bottle over the ice, then float the 10-year malt over the top. It was fun! Also get the Hemingway's New Fashioned if you're into process-heavy drinks with multiple components. 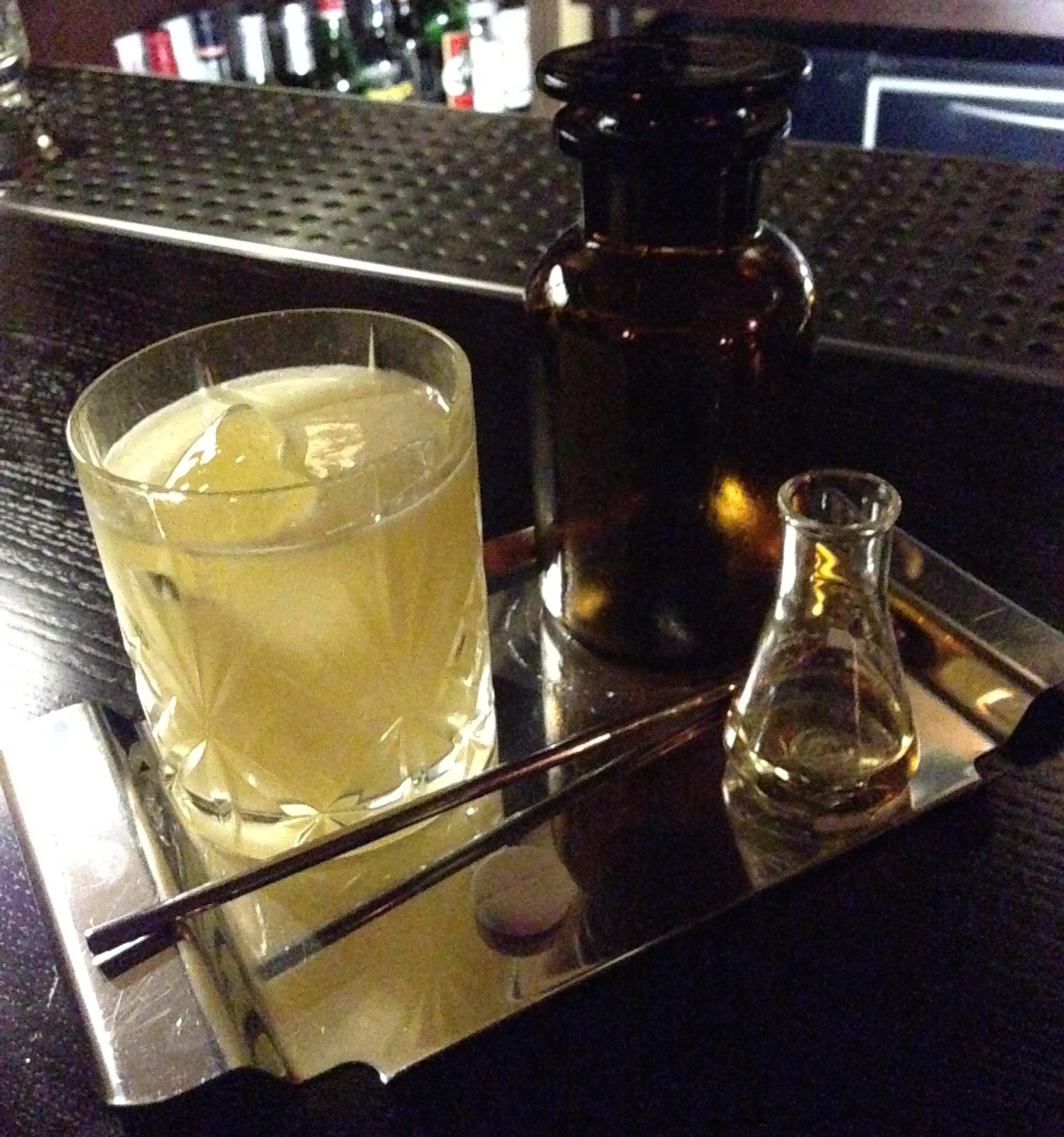 Nick Adams Penicillin (with everything poured)

Onto one strange thing that happened. Have you ever ordered an Irish Car Bomb? I'm assuming that most people reading this aren't frat boys, so I'm going to guess most said "no." Anyway, the first time I heard someone talk about it I was shocked. Needless to say, The Troubles are a very recent, violent, and real part of my country's history. Having a drink named after such a thing is hideous and offensive.

What's this rant got to do with the bar? Well, as part of Gin Fest, occuring this week in Prague, they had a special cocktail. It was called "The Bronx." I was recommended it by the bartender, so I got it. It came on a graffiti coaster and a pipette filled with a dark liquid. The bartender squirted the liquid on top of the drink and explained with a cheeky grin that it represented blood. 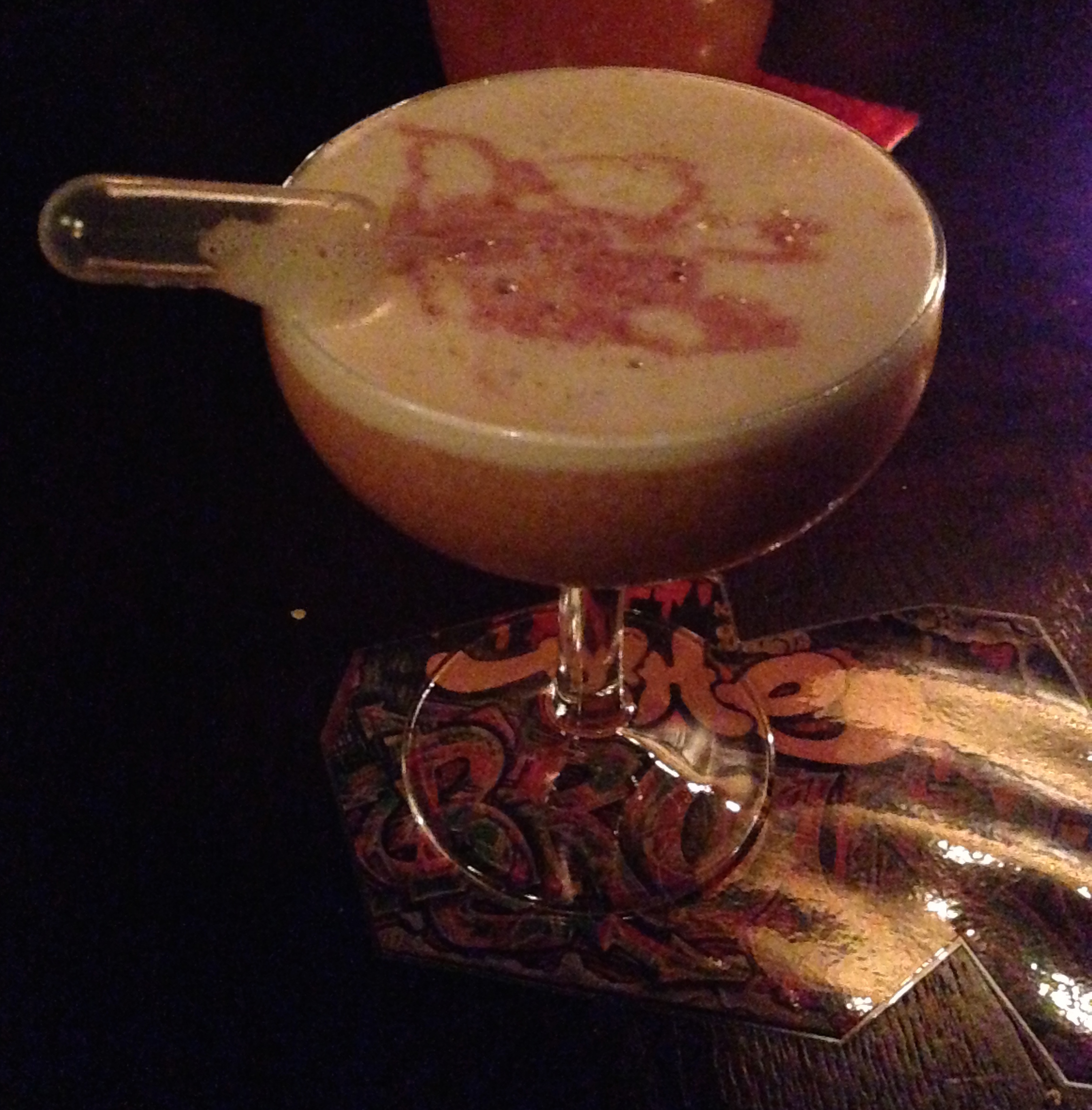 Was this a drink facetiously referencing gang violence? The bartender seemed to think it was pretty clever. I was just bewildered. For what it's worth, though, it didn't taste bad.

There were a number of other cocktails I didn't take photos of, but were delicious. Their Lavender Martini was great, and they had the first whiskey sour to rival my favourite (from the Dogpatch Saloon or 83 Proof in San Francisco). In fact, they have a fair few drinks on the menu with egg whites, which I'm a sucker for.

Hemingway is an inventive cocktail bar that wouldn't be out of place in any of the more "traditional" cocktail cities like San Francisco, New York or London.

EDIT: I had a couple more absolutely delicious cocktails, and had to append this post with two more recommendations. Both had home-made Falernum in them. The Save this Moment came on a floppy disk, and had a great gin/citrus base with a white chocolate syrup that gave it a really great flavour. 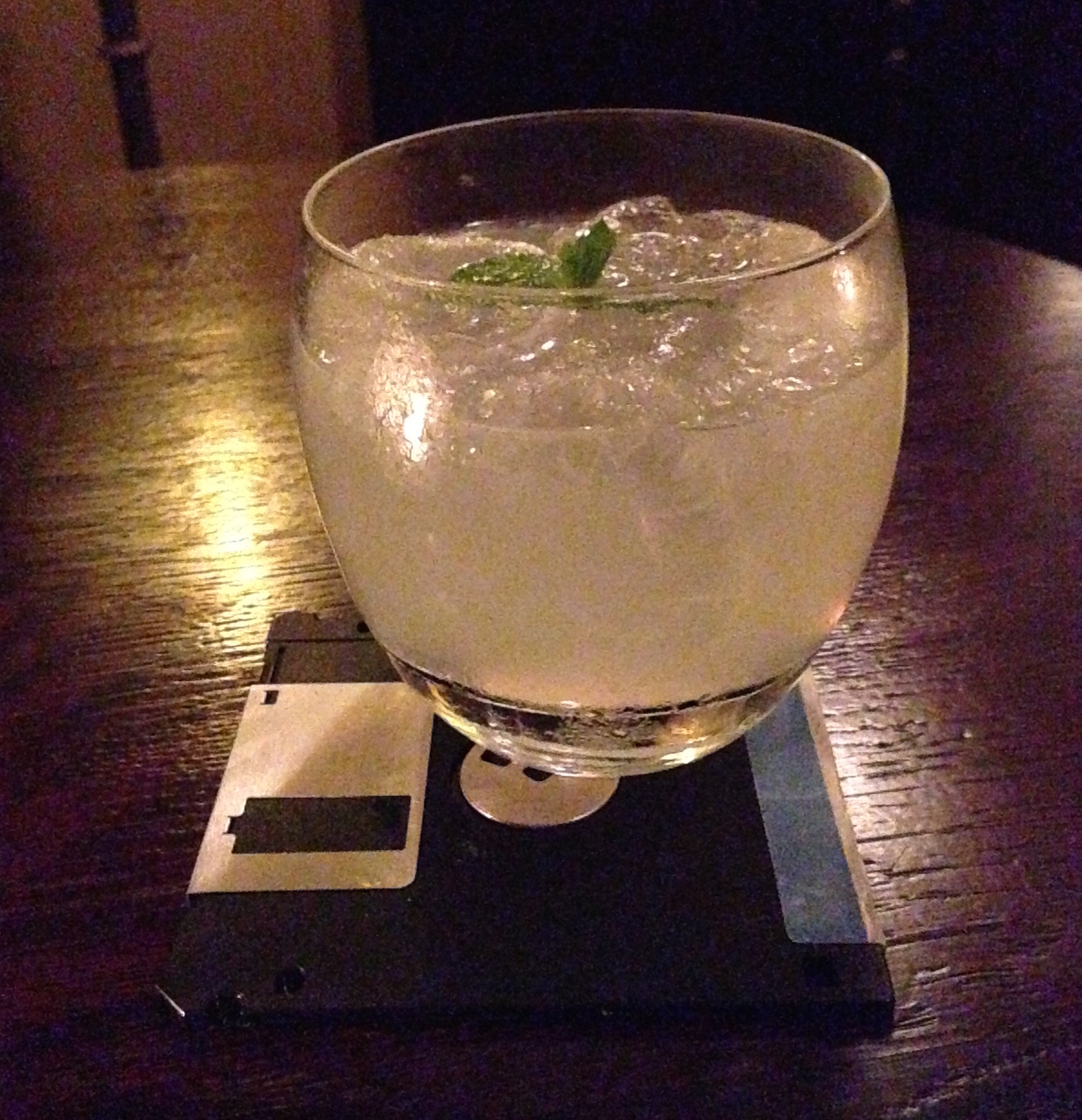 Le Swizzle Provençal was a rum-based version along the same lines. It was presented in a little metal bucket with a scoop of almonds. Très jolie!