Today is the one-year anniversary of two historic decisions by the Supreme Court. United States v. Windsor permitted federal recognition of same-sex marriages, and Hollingsworth v. Perry allowed same-sex marriages in California to resume. Here's us on the front page of the New York Times website one year ago today:

It was a great moment, and soon afterwards we got married in San Francisco city hall. This caused some confusion around our friends, as up to that point we introduced ourselves as a married couple. Weren't we already married? Why did we need to get married a second time?

Even now, when we are asked, "how long have you been together?" or "when's your anniversary?" there are a number of different answers we could give. We're always eager to educate people about our situation, and so I thought I'd write some of it down to reach a wider audience. Hopefully it will help people understand why the issue of same-sex marriage is important, the stuggles we've been through as a couple, and what an unprecedented legal case we are.

On 24th October, 2009, we entered into a civil partnership in Cambridge, England. Civil partnerships (also known as civil unions elsewhere) were introduced in the UK in 2004. They offered all the same rights as a civil marriage, but just called something different.

(Hampton once snarkily asked "Oh, so it's like they're separate but equal, right?" and I eagerly agreed, not being familiar with the US legal term.)

Civil partnerships are often the first step a country takes in offering rights to same-sex couples who would like to commit to each other – a skim milk marriage. A number of countries introduced them before then proceeding to same-sex marriage, and today in many places (certain states in the US, for example) they are the only way a same-sex couple can be recognised by the government. They range from offering a few cohabitation rights to all the rights an opposite-sex couple would expect when they become married. Thankfully, the UK had one of the more encompassing civil partnerships.

In the UK you can only get a civil partnership in a council office (this is Cambridge's). It's not a pretty building, so we decided to do it with just us and our witnesses (my dad and my brother). It was in tiny office and was over in about five minutes. We read out the legally-required pre-written lines, signed some paper, and we were set.

This then became an important date for Hampton's immigration paperwork, so one we have to remember (or at least look up) whenever we're entering the UK.

Soon after our civil partnership ceremony, on 11th November 2009, we had a gathering of our friends and family for a celebration. We went to Midsummer House, a fancy restaurant in Cambridge. Twelve people attended (including us) – both of our immediate families, and some of our closest friends.

I should have got a hair cut

We had written some short vows to say to each other. Before the meal we had Hampton's dad do a little ceremony where we read them out in front of our families. 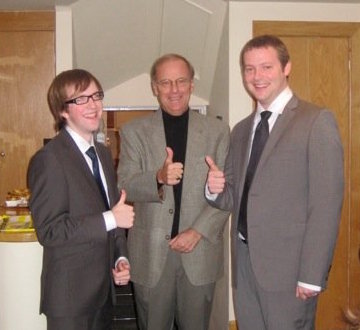 To us, this is our most important anniversary. We stood up in front of everyone and made a new, joined family by committing ourselves to each other. 11/11 is when we celebrate our anniversary by going out for a meal or whatever. If you ask how long we've been married – we'll probably count from this date. Which is strange, as it's the least legally-binding of our anniversaries.

Jump to 2013 – three and a half years into our partnership and things get much better for same-sex couples, but also a little more complex for us.

For those three and a half years, although we had been introducing ourselves as "married," that wasn't strictly true. We were "civil partnershipped"... but that doesn't have quite the same ring to it. Socially, it's a lot easier (and less of a mouthful) to say "married." Legally, however, the distinction between the two is pretty important. Despite civil partnerships offering all the same rights to same-sex couples in the UK, internationally it's a different story.

The United States federal government did not recognise civil partnerships from other countries. As immigration is federal, I couldn't base my US visa off my partnership with Hampton. This was a key point that a lot of people didn't quite realise. They would often ask why we didn't just get married in, say, Massachusetts and apply off that – well, the federal immigration service didn't care about what a random state decided to legalise, so it wouldn't have made any difference to us.

Instead of being on a marriage-based visa, I was in the US on a work-based visa (the H1B for visa nerds), and if I left my job I would have had to leave the US.

In early Summer 2013, a few things happened at the same time. Firstly, in the UK there was a vote in Parliament and it became clear that same-sex marriage would become a reality in the near future. Part of this would mean that couples who were in civil partnerships (like us) would be able to "upgrade" to marriage.

Then, in the US, the Supreme Court struck down DOMA as unconstitutional. This meant that the federal government could recognise same-sex marriages – which was exactly what we needed for immigration purposes. I could switch from a work-based visa to a marriage-based visa. We had a reason to get "fully" married!

The next step was figuring out how we should marry. Should we wait to "upgrade" in the UK? That may take some time, but would mean our first anniversary would be valid.

Or, we could marry in the next few days, now possible in California due to the Prop 8 ruling. This would let us start the immigration process sooner – but would potentially give us more hurdles as we would only have been married a short time. To the immigration process, it would seem like we got married and immediately applied for my green card. That could raise some concerns and delay the visa process.

As if that decision wasn't tough enough, there was another thing to consider. International law prohibits getting married two times in separate countries (without divorcing) – even to the same person. As countries recognise marriages from other countries (i.e. a valid civil marriage in one country is valid in another country), this could count as getting married a second time.

Would we be inadvertantly breaking the law if we got married in California? This legal situation hasn't really existed before. We had a number of debates over whether our civil partnership from the UK would count as marriage in countries with same-sex marriage but without a civil union. Confused yet? We certianly were (and still are).

We went to see an immigration lawyer. She said it would be fine for the immigration process to marry in the US, and she didn't really think it would be illegal for us to obtain a marriage certificate here.

So, we booked an appointment at San Francisco City Hall and on 10th July 2013 we got married. Again.

Afterwards, we started the immigration process and I successsfully got a green card. As I mentioned previously, it's a little frustrating that the US government only sees us as being married for just under a year. My green card is only valid for two years because of this. If we'd been married for more than two years, it would have been valid for ten years. Obviously, to us, we've been married about four and a half years, so it's a little incongruous.

This, now, is our third anniversary. I doubt it will be anything other than a date I have to remember from time to time when filling out immigration paperwork.

Three anniversaries does give you an excuse for three times as many anniversary dinners, so that's nice. Plus I got to marry a guy I love three times (and I'd do it at least three times more! Any more than that, though, I'd probably be wondering why we needed all these extra commitment ceremonies).

The legal stuff, though? That's been a headache. Most people are surprised when we explain all of the above. They don't realise how difficult it's been and how many loopholes we've had to jump through.

For us, in our home state, we hope the worst is over. But there are many places – countries and states – where things are still inequal for same-sex couples. Take the bridge below, the Arlington Memorial Bridge. We walked along it this winter. It crosses between the District of Columbia and the state of Virginia. We realised that in DC, we have full rights as a married couple. The state we were walking towards, Virginia, does not recognise our marriage. In the process of walking across that bridge, we were giving up our rights. If Hampton needed to go to the hospital and we were in Virginia, we would be treated as strangers (this actually happens).

In many ways, we still have a long journey ahead.