I'd read recently about how absinthe was having a resurgence in popularity, especially in Prague. While we're here, we decided to book a tasting with Absinthe Prague.

I'd had absinthe before in London, and I remembered enjoying it despite not liking anise-flavoured things. I was looking forward to tasting a range of absinthes to see if I could taste any differences.

The tasting itself is in the basement of Groove Bar, a trendy cocktail bar just off the river. The host is Aaron Johns, an ex-pat living in Prague who definitely knows his stuff – both about absinthe and beer (he runs a local beer tour, too). He gave a lot of interesting history on absinthe, most of which I had no clue about. He explained in detail all about how it's made, why it's made that way, and even about the ban. He was great at answering questions, too.

The ritual of drinking absinthe was enjoyable to learn about and even more fun to do – the sugar cube, the louche, the absinthe spoon all came together to produce a great experience. You get a little absinthe in a glass, then balance the spoon over the top. Then you place a sugar cube on the spoon and drip ice-cold water onto the sugar until there's a ratio of about five parts water to one part absinthe. As you drip the water in, the absinthe goes from clear to cloudy (the "louche"). At that point it's ready to drink.

The tasting covered six absinthes – two each from France, Switzerland and the Czech Republic. They all had unique characters and it was a lot of fun comparing notes with what others thought. 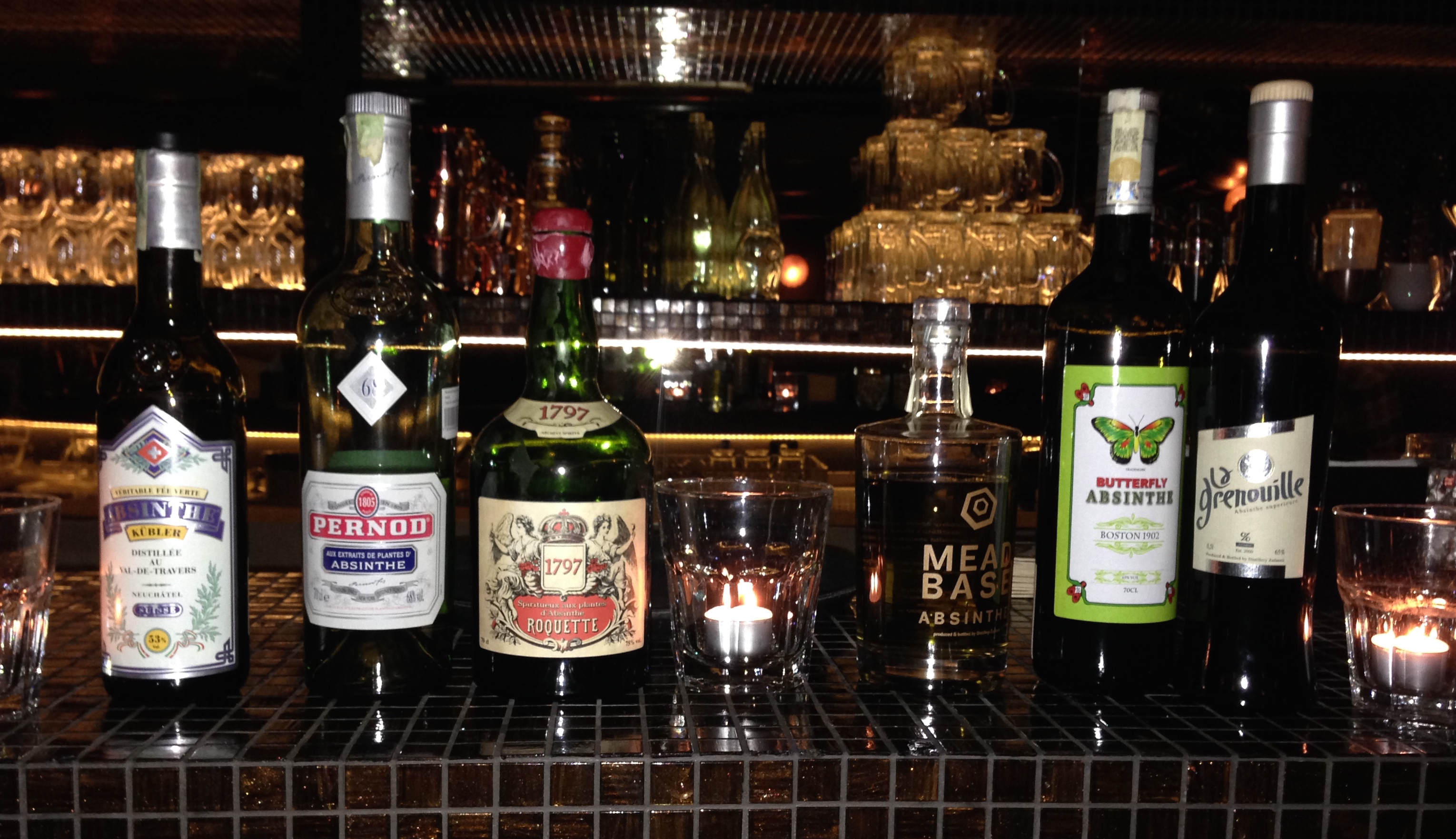 The absinthes we tasted

We started out with a Swiss "le bleu" style – it was colourless rather than the vivid green usually associated with absinthe. During the louche it had a slight blue tint to it. The anise flavour was pretty strong, and that put me off a little.

We then moved onto two "classic" absinthes – one French and one Swiss. They were both heavier on the wormwood, and less on the anise flavour. The French one, made by Pernod, was quite nice. The Roqeutte 1797 was apparently based on a recipe from the original inventor of absinthe. It had a really complex palate, having hints of citrus as well as the other anise/wormwood flavours. It was a little intense for me.

My two favourites were the unconventional absinthes. Both produced in the Czech Republic, one was based on a honey liquor and one was from an American recipe. The honey one didn't even need sugar added, and it went down really smoothly. It almost tasted like a cocktail. The American-recipe absinthe, Butterfly, had almost a gin-like flavour. Perhaps I enjoyed it so much because it had flavours more like a liquor I was used to?

The last absinthe was French: La Grenouille. I was glad it was saved to the end, cause it had a very intense flavour.

We ended up learning a lot about absinthe (such as what absinthe actually means, and the difference between absinthe and absinth) – it was a super-entertaining evening. The pours weren't too heavy, so we weren't blasted by the time we finished. It also gave both Hampton and me a deeper appreciation (and understanding) of the drink. In fact, the next night, we both ordered absinthe off the menu.

Absinthe Prague is great, and something you should definitely do if you're seeking out a unique, informative evening with some tasty spirits.