Touring the Jewish Quarter of Prague

The Jewish Quarter (or Josefov) of Prague is in the Old Town, just north of the Old Town Square. We'd been told that the Pinkas Synagogue was a must-see, so we set off on a visit without learning much about it. All I knew was that it's now a memorial to victims of the Holocaust. 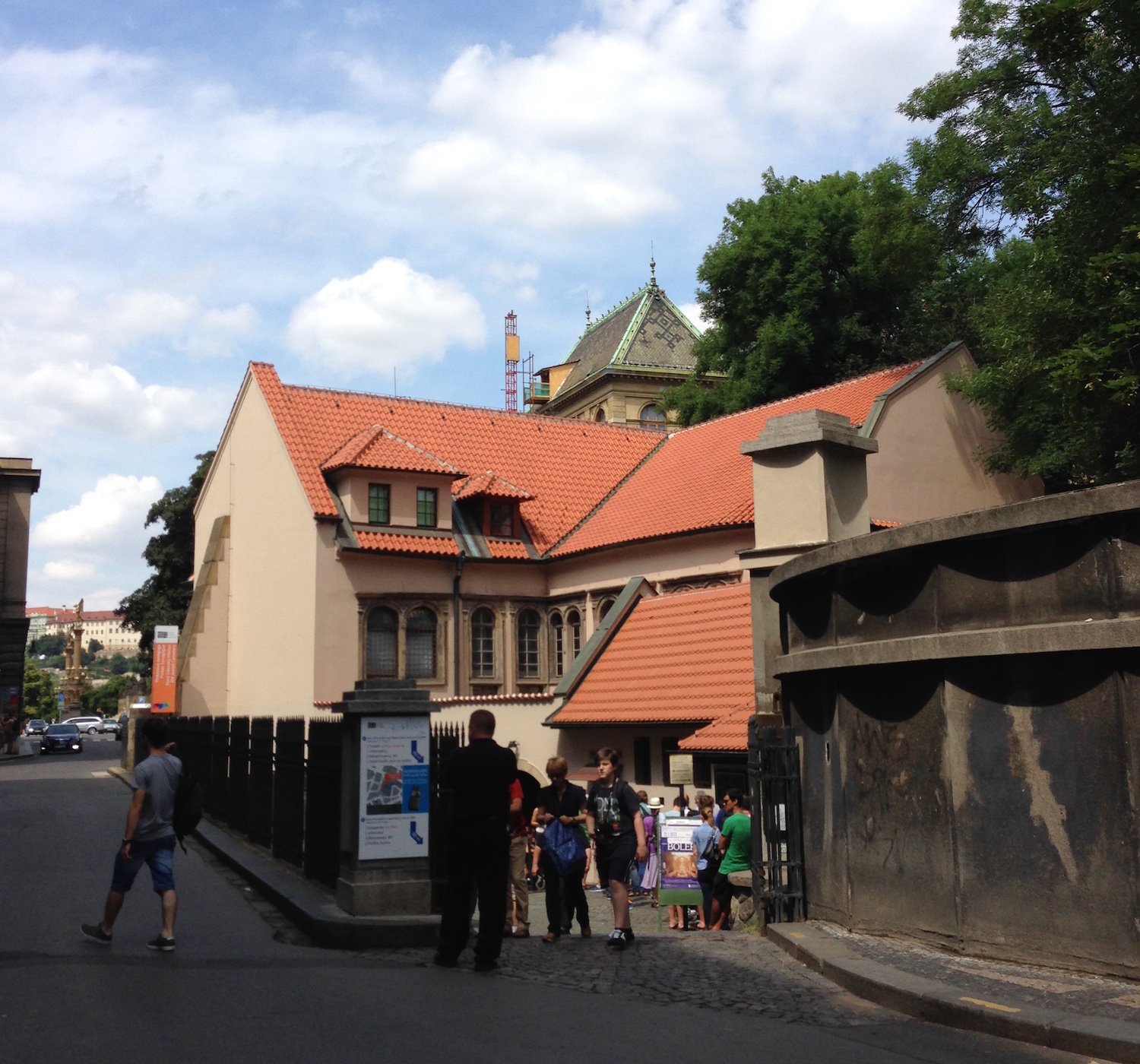 Pinkas Synagogue from the outside

We arrived at lunchtime and the queue was really long and slow-moving. Not good. 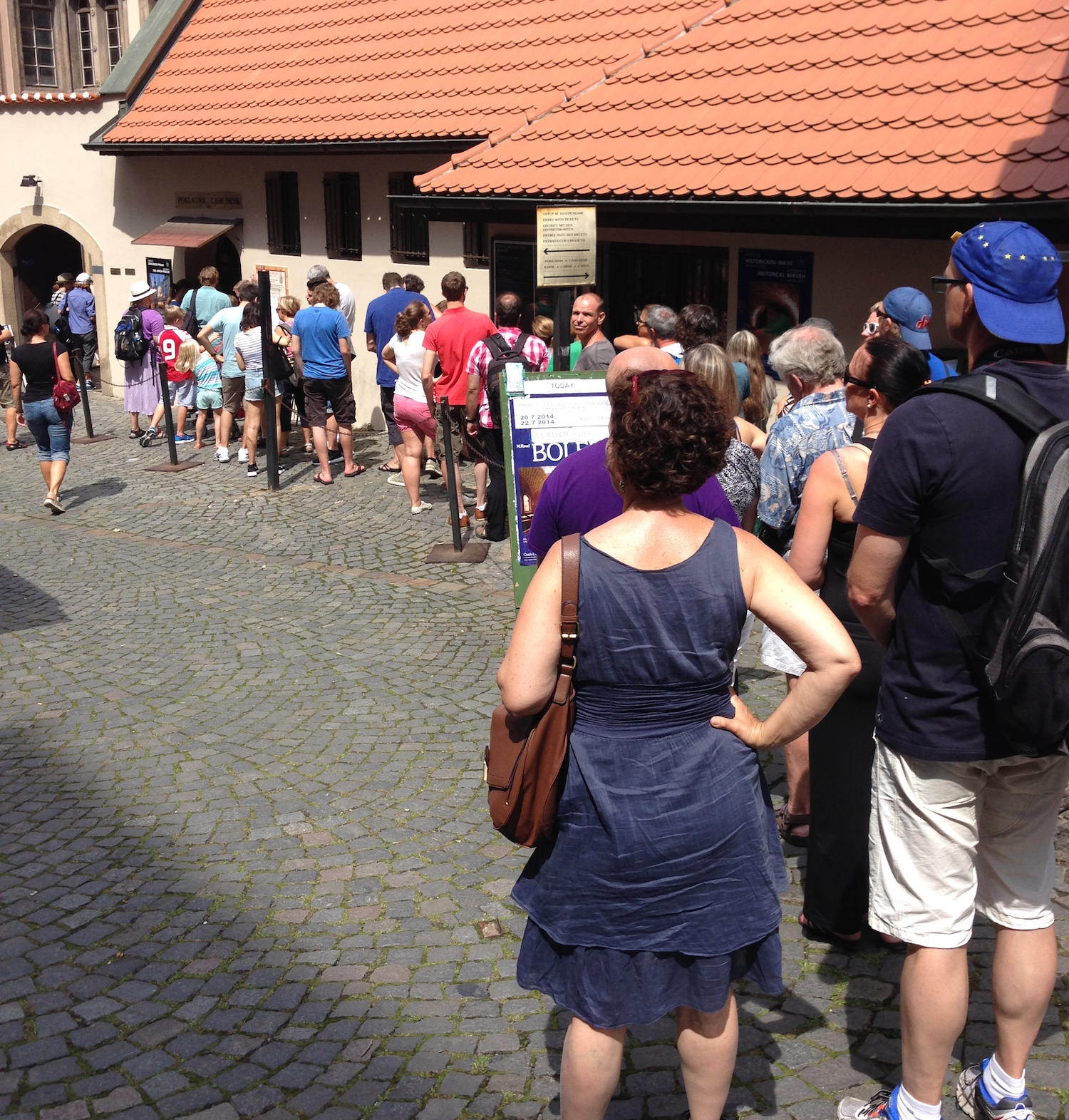 However! We found an EXPERT WORK-AROUND for buying tickets without having to wait in line. Head slightly east on the same road and take the first left. You'll find a ticketing office. 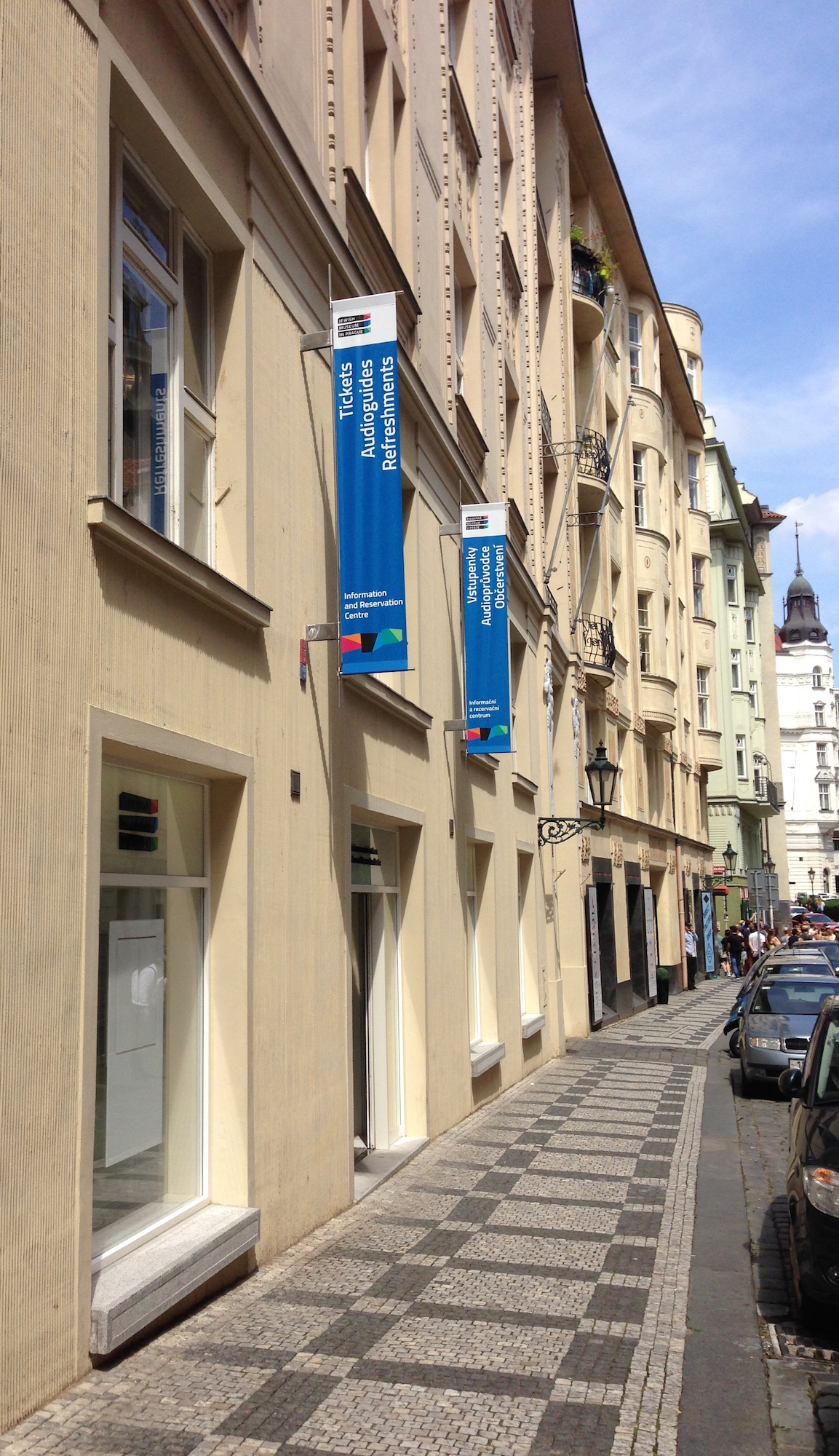 Just around the corner – under 2 mins walk.

There was no queue and we got our tickets immediately. You can't buy a single ticket to see the synagogues/museums of Josefov individually – you have to buy a multi-attraction ticket. The most basic ticket was 300Kč (~$15) for four attractions: the Old Jewish Cemetery, the Klausen Synagogue, Ceremonial Hall, and the Spanish Synagogue. You could pay 100Kč more if you wanted to see the Old New Synagogue, but we gave that one a miss. The ticket is valid over seven days, though, which is good if you don't have enough time to visit all the places in one day.

After we bought our tickets we went back to the Pinkas Synagogue and sailed past the line there to buy tickets.

The inside of the Pinkas Synagogue serves as a memorial to the 80,000 Bohemian and Moravian Jews that were victims of the Holocaust.

There were about five rooms like the one above – and see those red and black, floor-to-ceiling patches that line the walls? Those are the victims' names, birth-dates and death-dates. Across the rooms they're written out like that, in letters maybe a centimetre high. 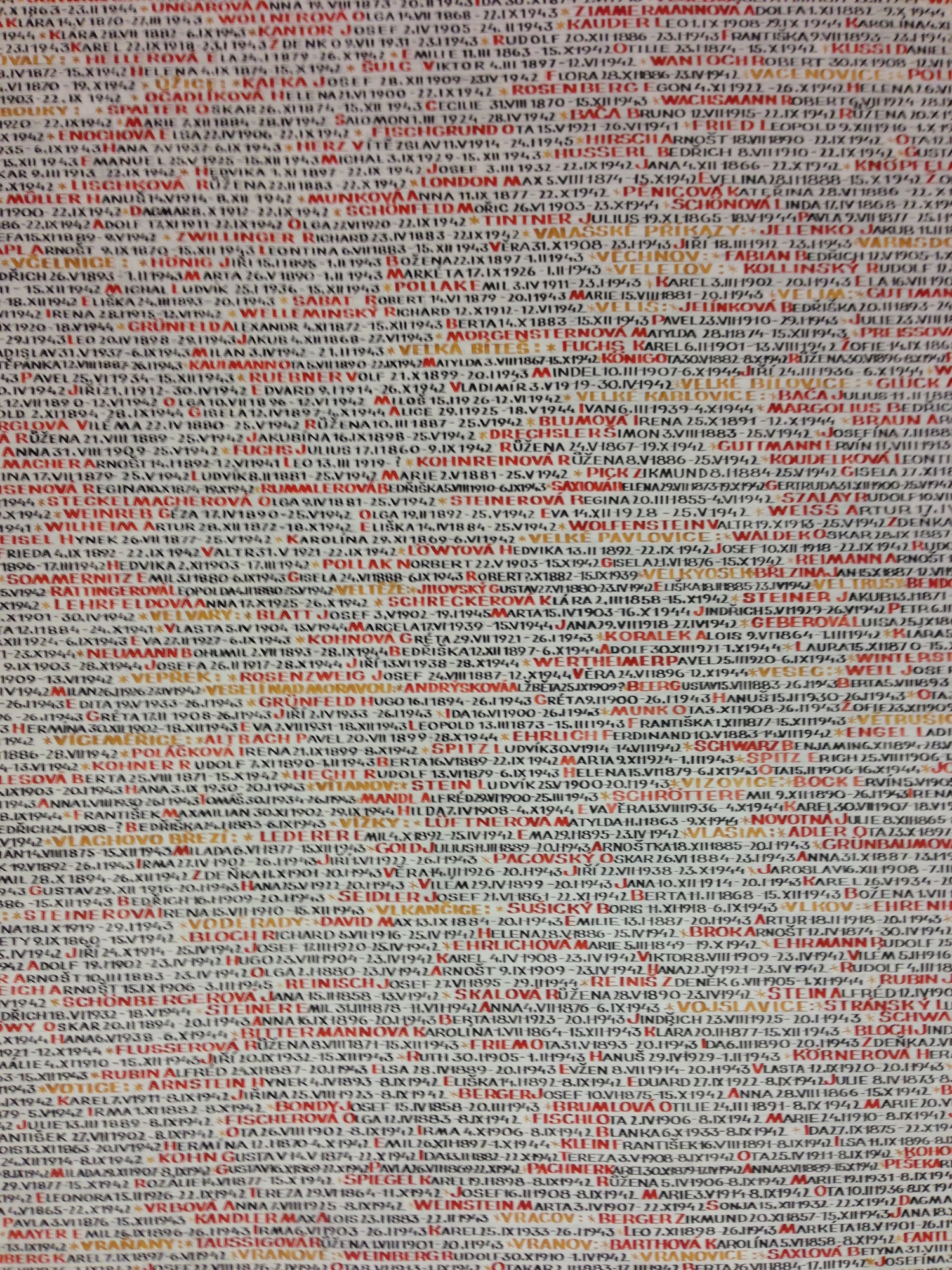 Names, births and deaths of victims

At first, you don't quite understand it. Then as you start reading, seeing the families grouped together, it's a little overwhelming. Especially when you see room after room of them. It was powerful stuff, and something I'd recommend everyone do while they're in Prague.

After exiting the synagogue, you walk through the Old Jewish Cemetery. While not that large geographically, it apparently contains over 12,000 tombstones. 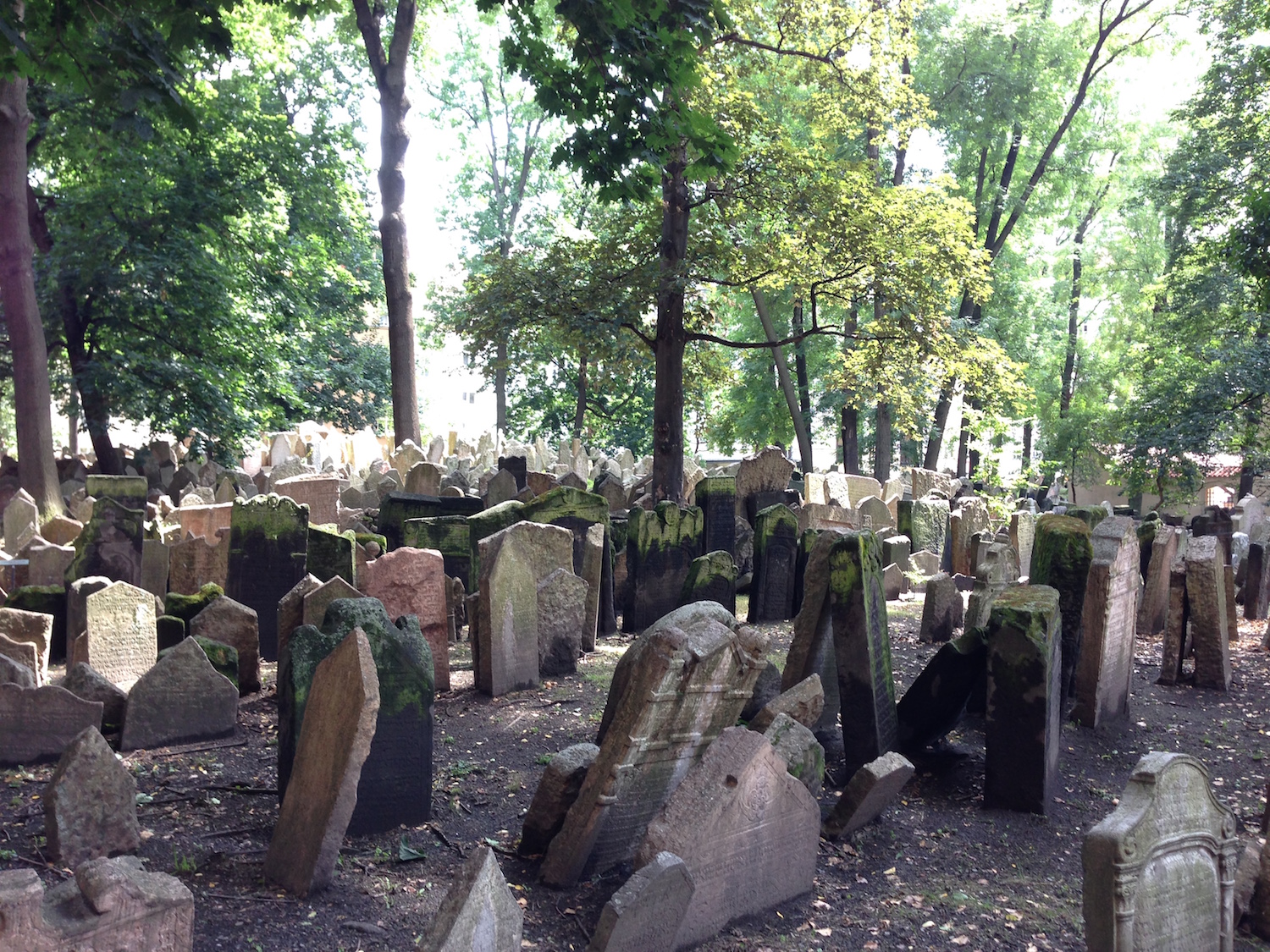 Needless to say, it was crowded with graves. The tombstones stuck out at all kinds of angles, and many were only just sticking out of the soil. 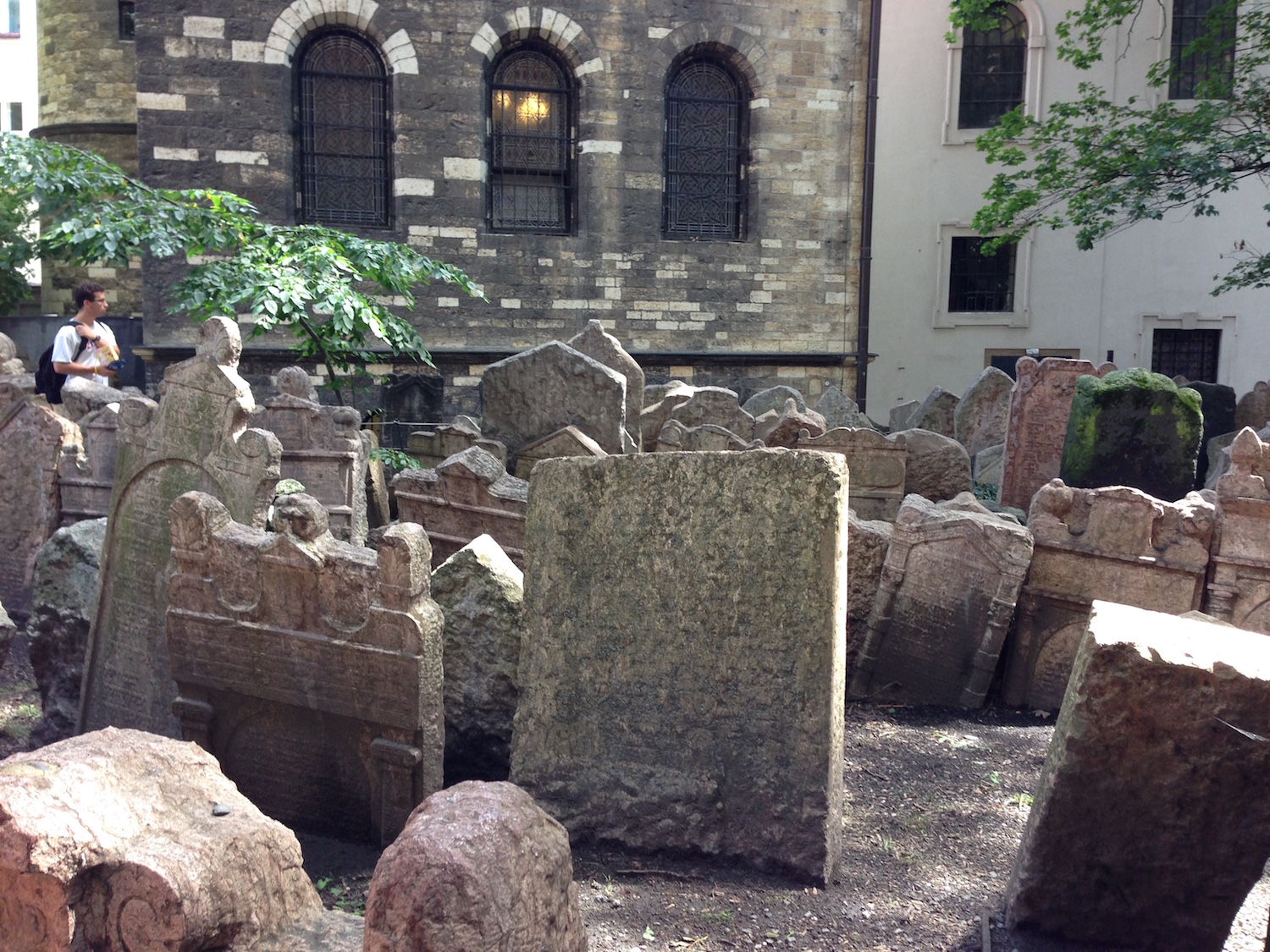 Another view of the cemetery

The cemetary exit leaves you just outside of Ceremonial Hall and the Klausen Synagogue. As we already had the multi-ticket, we decided to give them a visit. 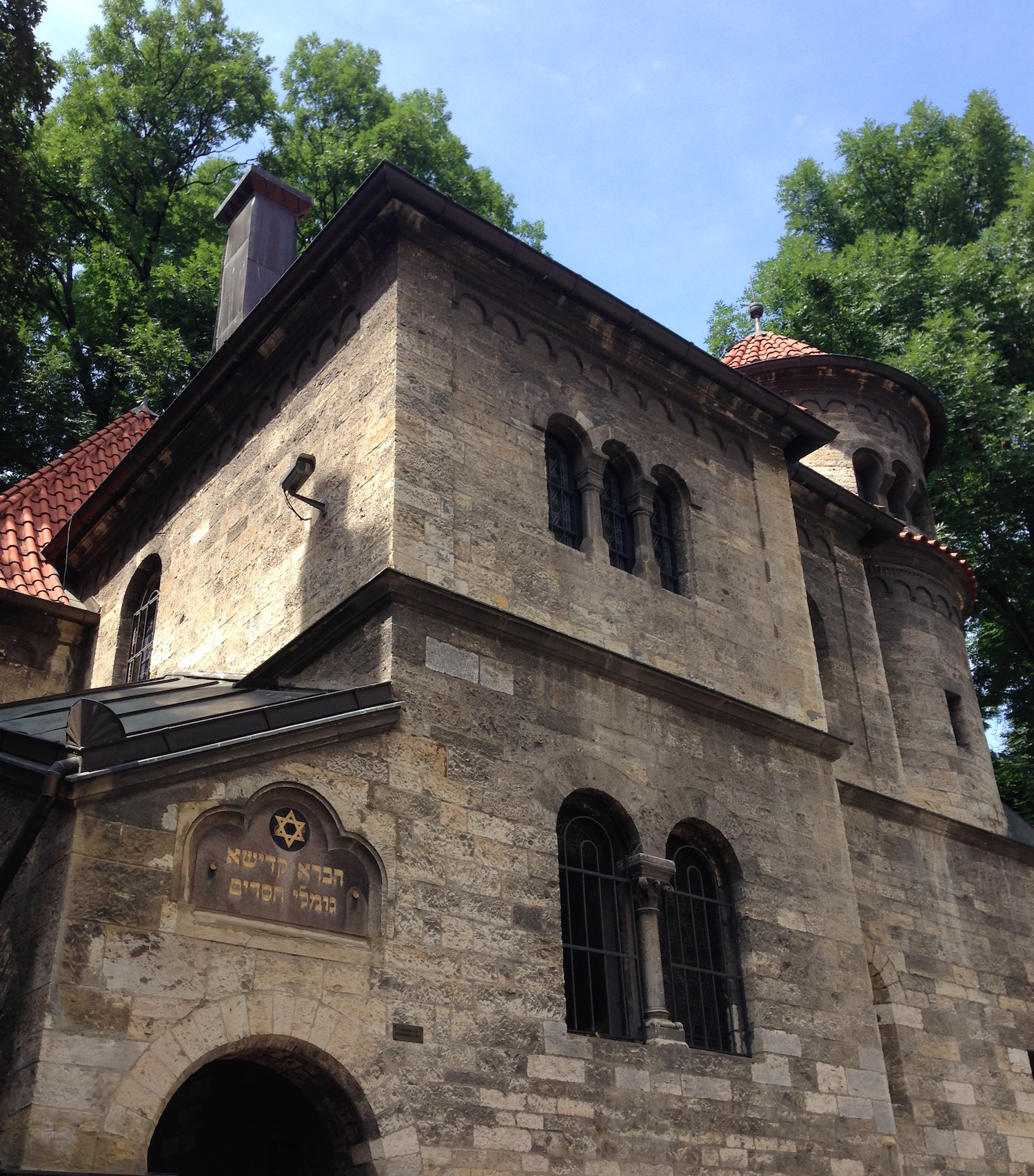 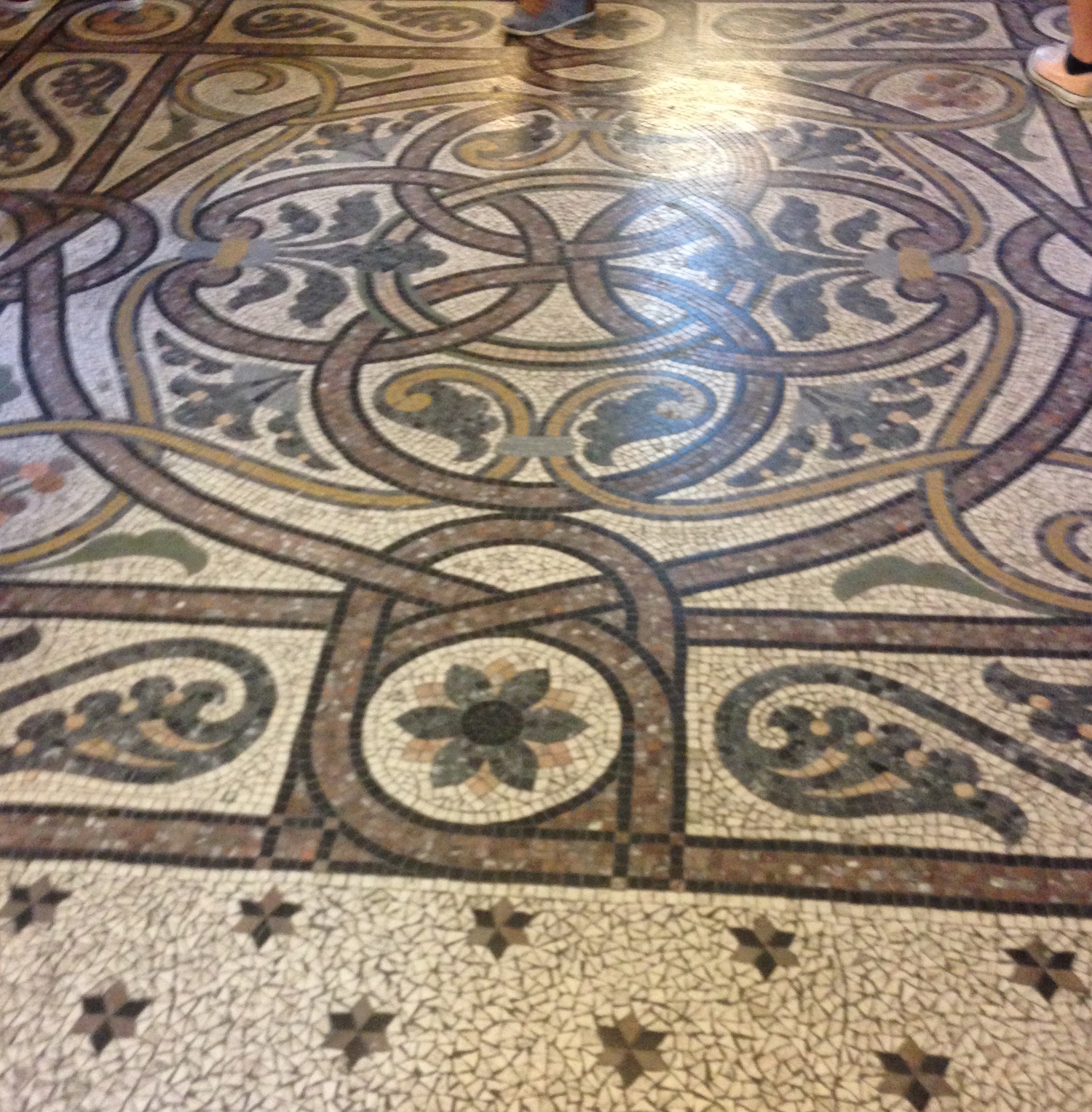 The Ceremonial Hall used to be a kind of mortuary, so had a bunch of exhibits on the rituals surrounding death in Judaism. It was kind of interesting, but mostly just items in display cases.

The Klausen Synagogue was similar. Apart from the Pinkas Synagogue earlier on, I'd never been inside a synagogue before. I'm not quite sure what I was expecting from the inside of a synagogue, but I was kind of disappointed that it looked just like a Christian church.

Inside the main area of the Klausen Synagogue, there were display cases showing items relating to Judaism. I found it a little strange. I almost wanted the museum part and the religious-building part to be more separate. Maybe it's just because I wasn't expecting it to be so much of a museum.

After leaving the Klausen Synagogue, the route to the next stop on our ticket took us past the Old New Synagogue. I only learnt afterwards that it's Europe's oldest active synagogue. Apparently, its attic is also the storage place for the infamous Golem of Prague (spooky noises).

We continued walking, made a couple of quick turns, and found ourselves at the Spanish Synagogue. Not much to look at from the outside, inside it's absolutely stunning. 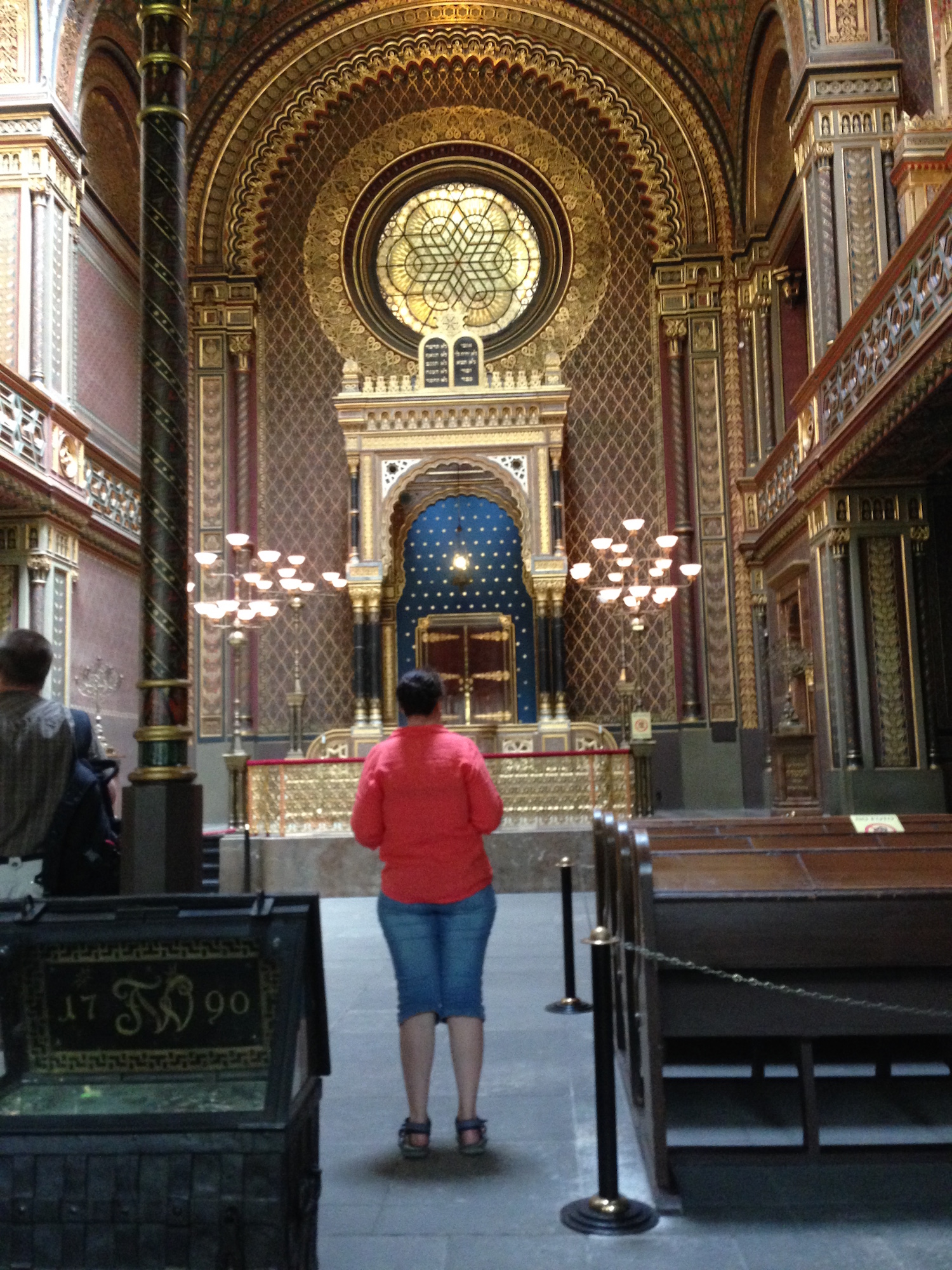 The walls are covered in intricate patterns, mostly using reds and golds. The Star of David appears in motifs everywhere, and I spent ages just following the patterns and their interplay across the walls. The central dome is beautiful and has a Star of David-shaped chandelier in the centre.

Dome of the Spanish Synagogue

Fun fact: it doesn't seem to be clear why it's called the Spanish Synagogue. One theory is that the interior design reminded people of the "Golden Age" of Judaism in Spain. Another theory is that it used to be a location for Byzantine Jewish worship, and that led to legends of the Iberian Sephardi Jews once worshipping there.

Like the Klausen Synagogue, the Spanish Synagogue is a museum as well as a religious building. I was mostly distracted by the detailing on the walls, but I did look at a couple of the display cases in the upper balconies. They were pretty interesting, detailing the history of Josefov across the centuries. If it hadn't been over 30ºC in there, I would have stayed longer.

I'm glad we ended up seeing more of the Jewish Quarter than just the Pinkas Synagogue, but I'm not sure I'd see the Klausen Synagogu and the Ceremonial Hall if I were pushed for time. I definitely found it more rewarding than most of Prague Castle, though. I made a map of the route we took – but note that the bit from the Pinkas to Klausen is through the cemetery rather than around Maiselova.