We toured the four main museums in Amsterdam: the Rijksmuseum, the Van Gogh Museum, the Anne Frank House and the Stedelijk Museum. For the first three Hampton's Dad bought tickets beforehand – which I'd highly recommend doing as the lines looked hellish. For the last one, Hampton and I rolled up at 4pm on a Sunday (with closing time at 6pm) and waltzed right in. 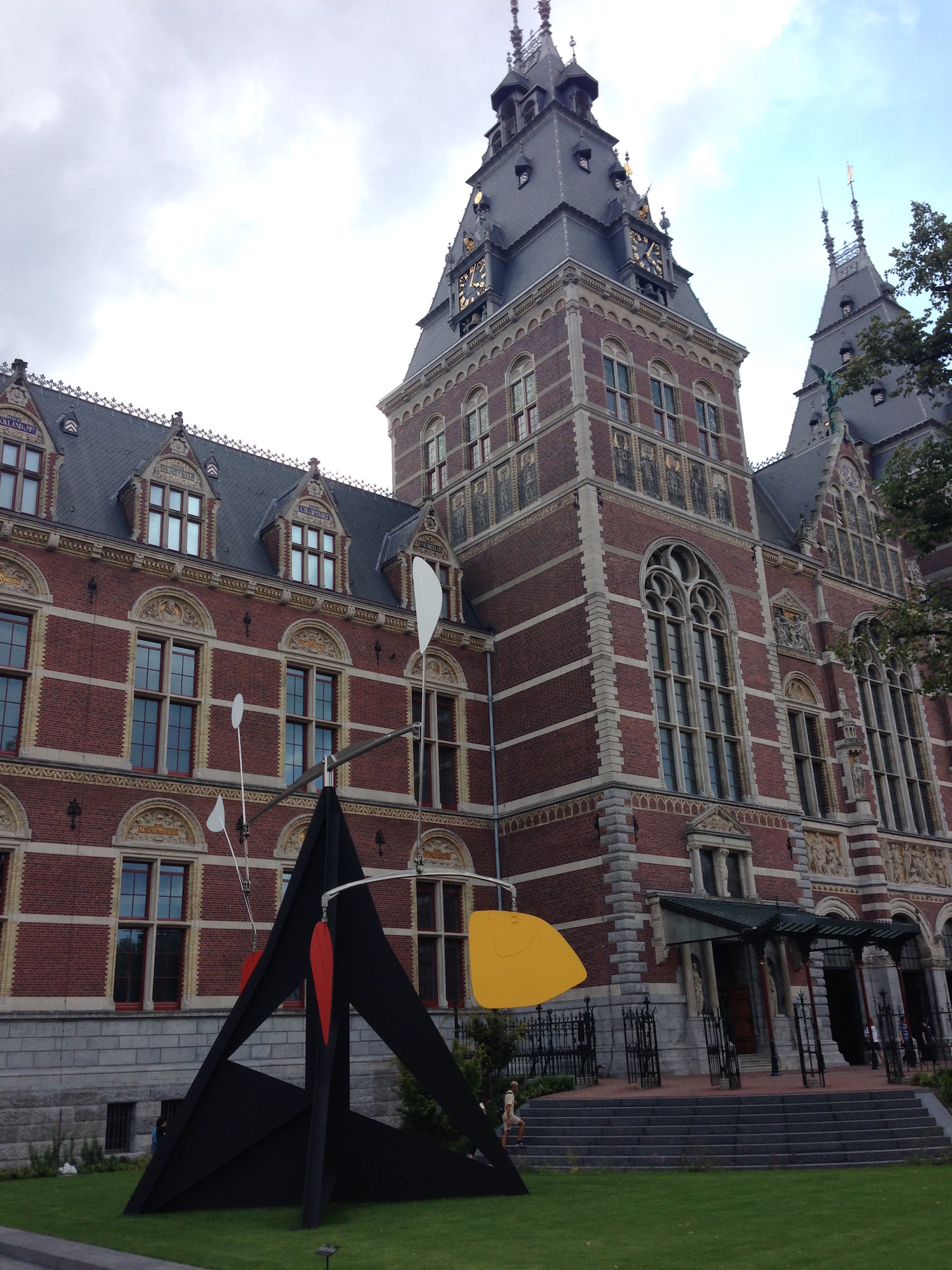 The Rijksmuseum has recently undergone a huge rennovation, re-opening in April 2013. It certainly shows – the internal atrium is beautiful and the layout is intuitive. Pro-tip: don't pay €5 for the museum audio guide! The museum has a free app for iPhone/iPod – with all the same information on it. Use that instead! They even have free wi-fi in the museum if you forget to download it before you get there.

The app offers a 90-minute "highlights" tour, which we did. I could have spent more time in the Dutch masters area (on the second floor) – the highlights tour only looked at a couple of paintings there. The impressionist and romantic areas were a little less exciting.

The museum itself is packed. Admittedly, we are in the middle of tourist season, but I expected it to be slightly quieter on a Monday. It was difficult to get a peaceful moment with any painting – but I guess that's what happens when a museum is closed for a while and it's also the 19th most visited museum in the world.

There's a couple of super-famous paintings on the tour, the most famous being the Night Watch by Rembrandt. Of course, it was in an insanely-crowded room. It was pretty easy to get close, though. 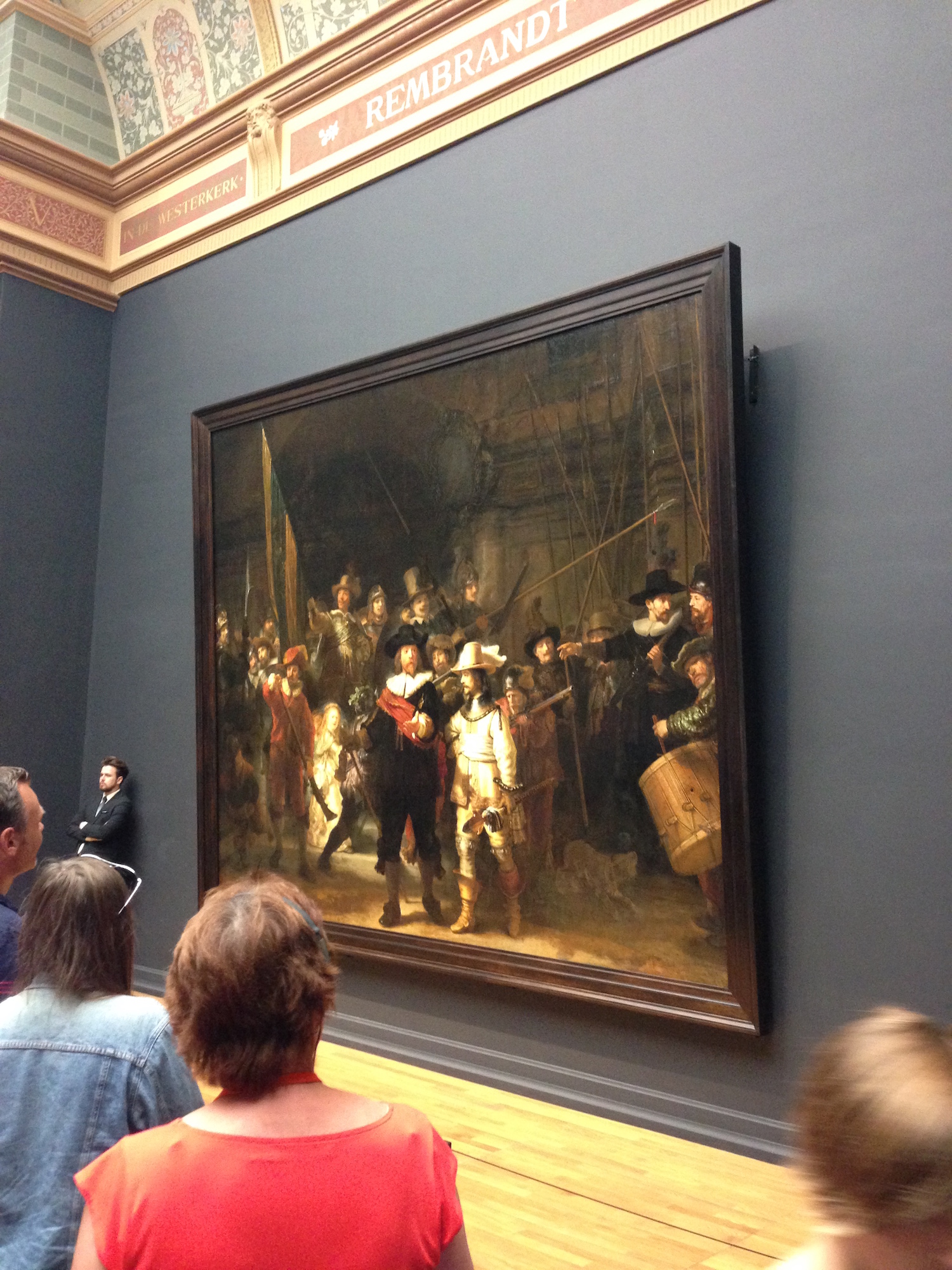 Who watches the Night Watch?

The information cards they had were really useful. They circle particular elements of the painting, drawing out background figures or where someone slashed the painting.

I also really liked The Milkmaid by Vermeer. I could have spent a while looking at that painting. The rest of the museum was a little repetetive, especially the ground floor, which had a lot of medieval carvings.

The Van Gogh Museum was quite different from what I was expecting. There was a heavy emphasis on his development as an artist and his interaction with contemporaries. 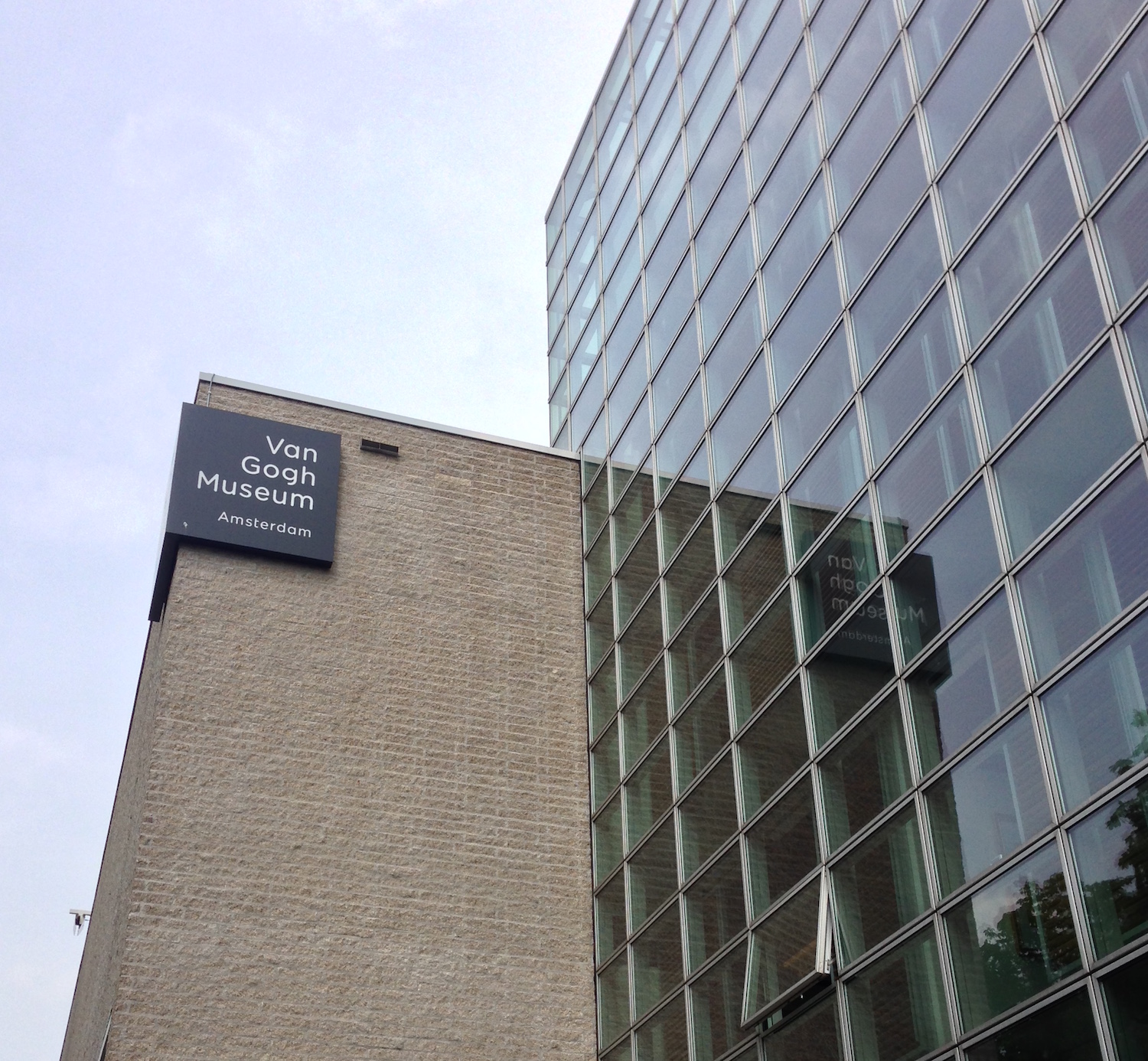 I was prepared to see gallery after gallery of sunflowers or olive trees, but in fact there was a lot more range in his style than I had previously thought. There were a number of Japanese-influenced paintings which had some aspect of the Van Gogh style I knew, but in a completely different context. There were also a lot of muted paintings, absent of his usually vivid palette – one of a bird's nest in particular stood out.

Being fans of contemporary art, it's probably no surprise that the Stedelijk Museum was our favourite. The building has a giant bathtub-shaped entrance, which is awesome. All the walls inside are painted white, and going from the ground floor to the first floor is a mesmerising experience – there's neon art all around the upstairs atrium, so you walk into a glowing otherworld. 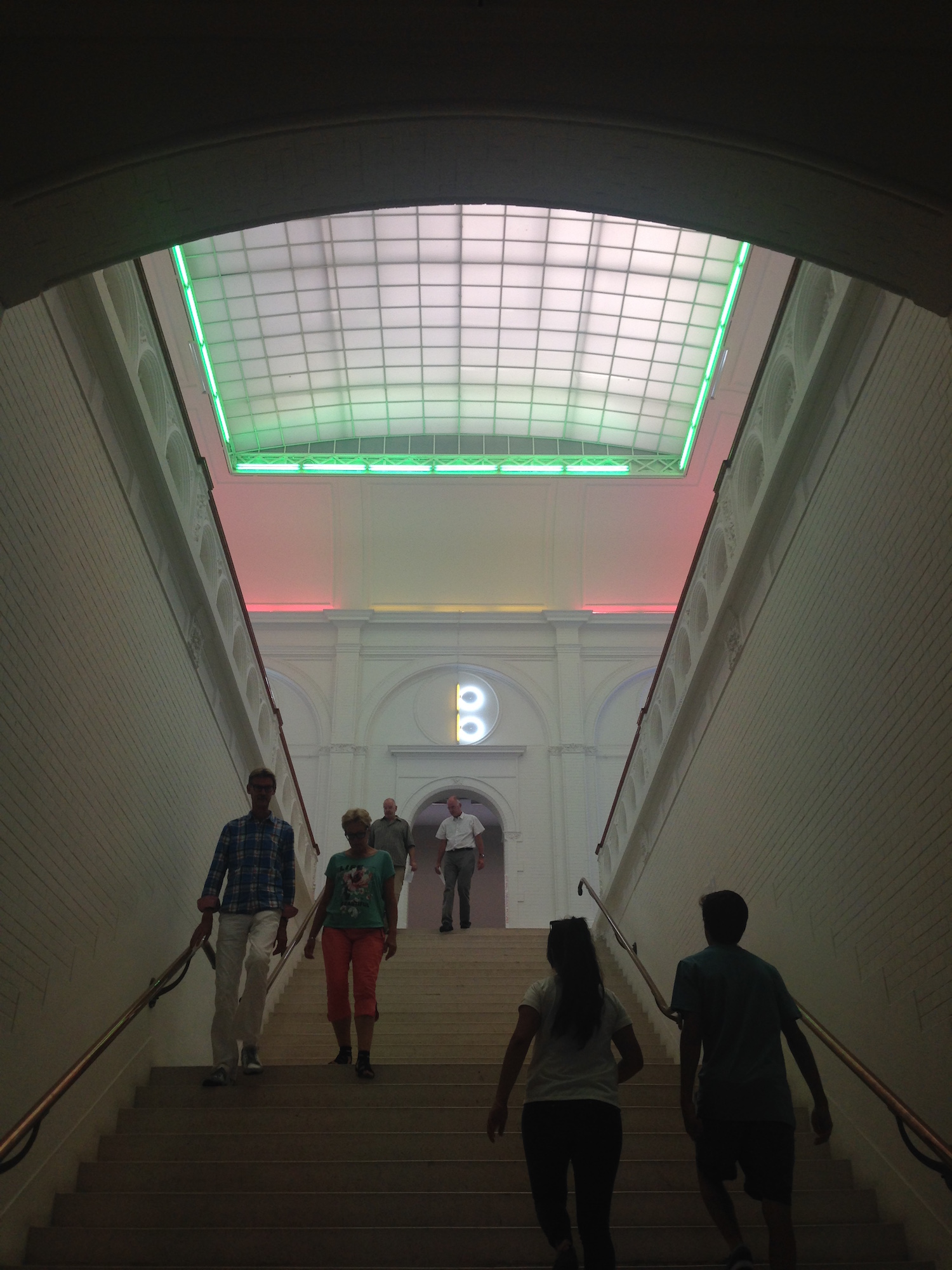 Going up to the first floor

On some of the columns downstairs, there's a cool set of porcelain plates by John Knight. They're from the Autotypes series. Each one has a blueprint of an extension to a city's modern art museum. They reduce the buildings to nothing but floor plans, and we both loved them. I want some for our house. 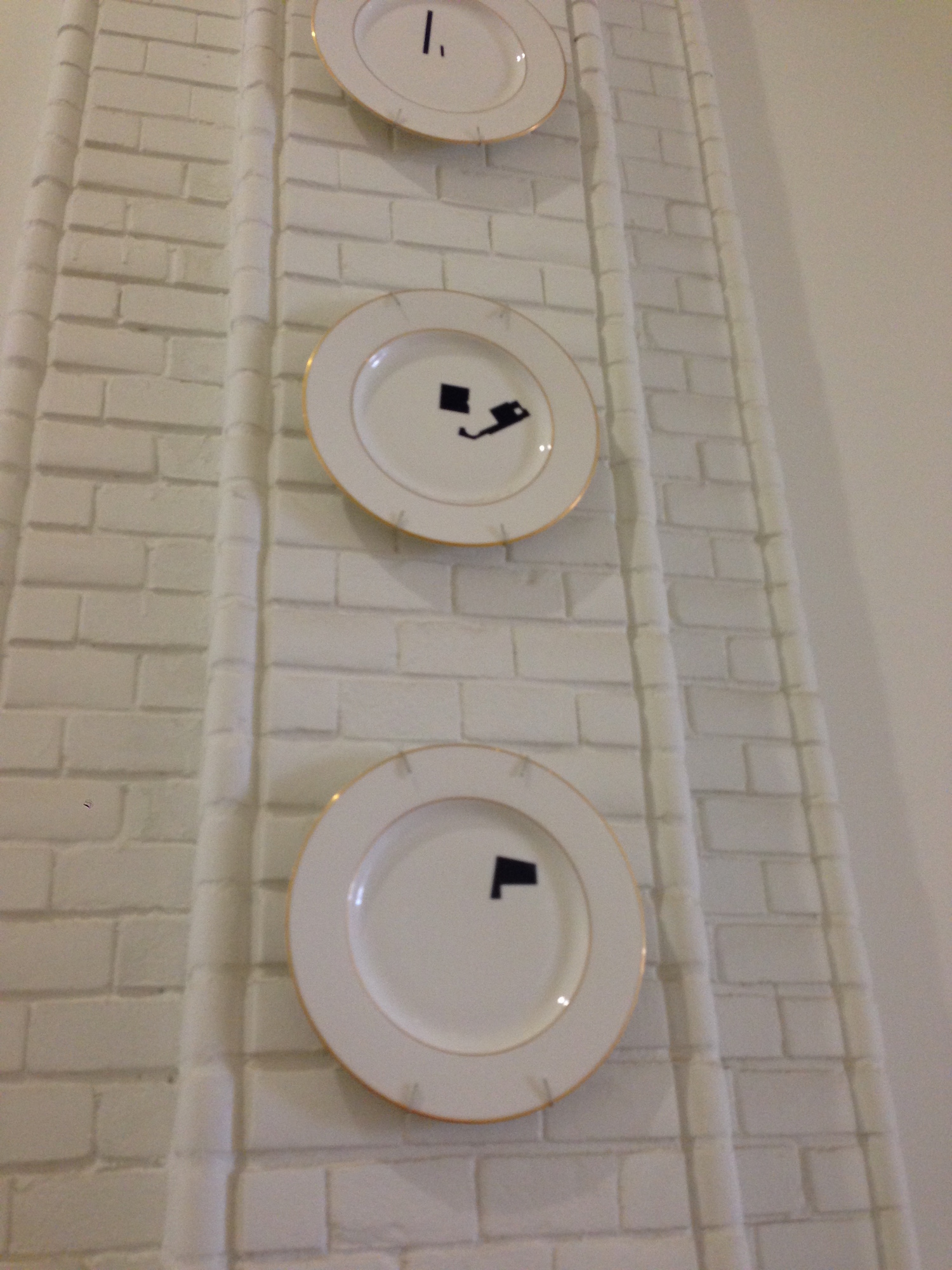 Downstairs traces modern art from 1900-1950, whereas upstairs does 1950-present day. The art is mostly displayed chronologically, and they had some great unfamiliar pieces by famous artists. I love seeing new works by great artists (maybe that's why I don't like the "greatest hits" style of MoMA?). 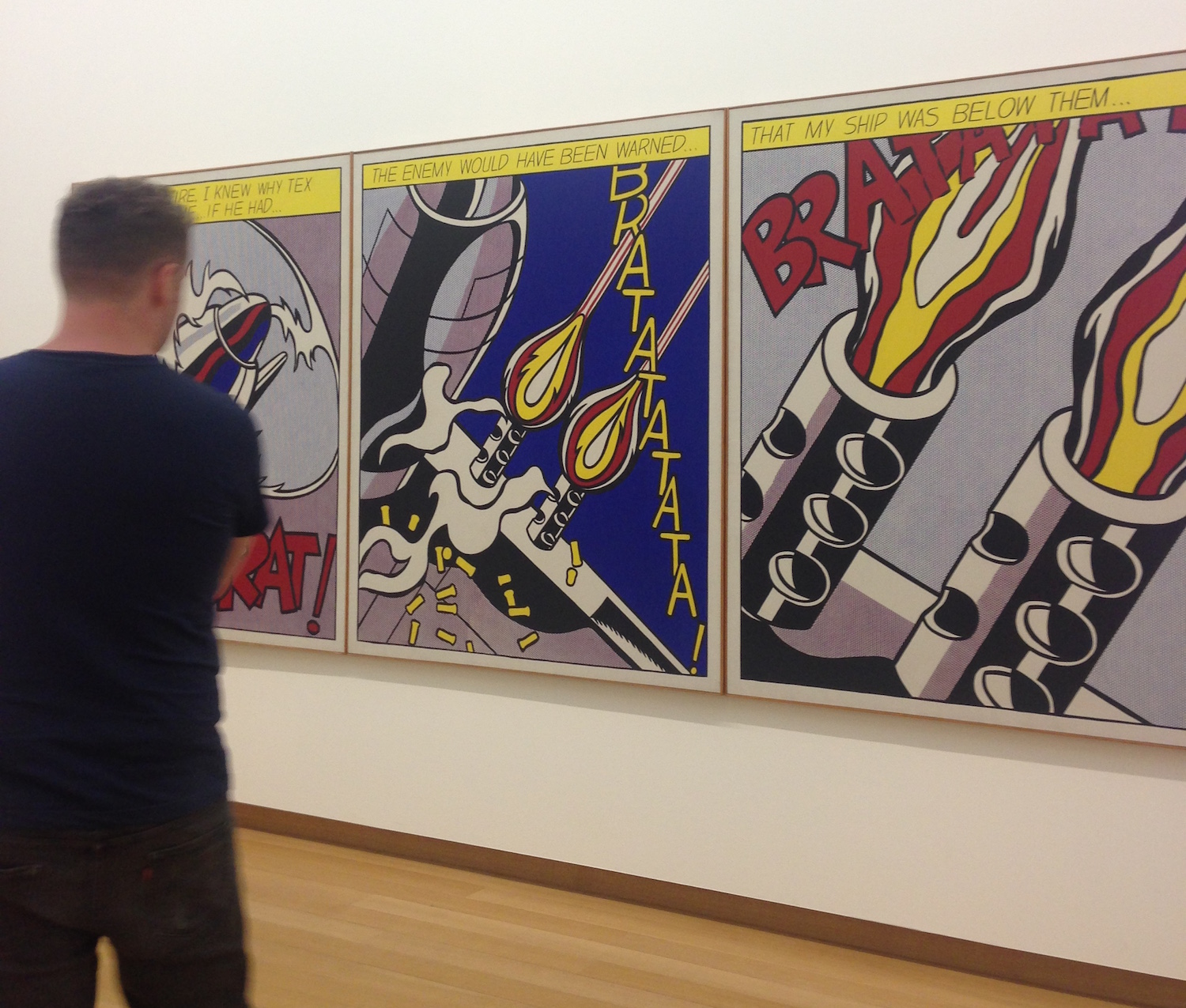 As well as contemporary art, there was a large section of the museum devoted to design. There were lots of fun household items from the 1960s and 1970s. 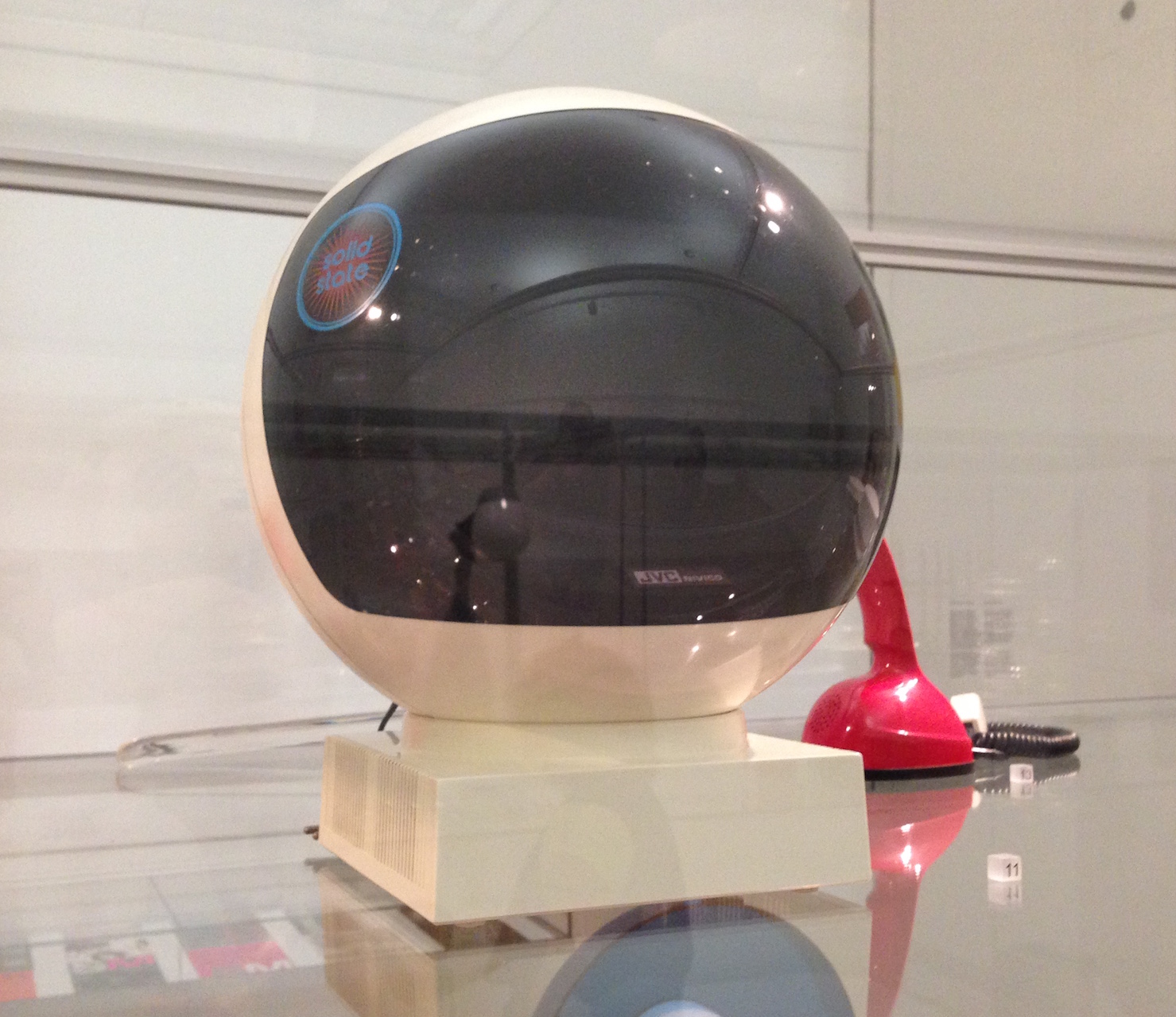 There was also a special exhibition/retrospective on Gijs+Emmy, a couple who revolutionised jewelry in the 1960s. One of their first exhibitions was in the museum, and it was neat seeing videos of their models back then. Their necklaces were more like cowls than dainty chains, obscuring most of the model's face. 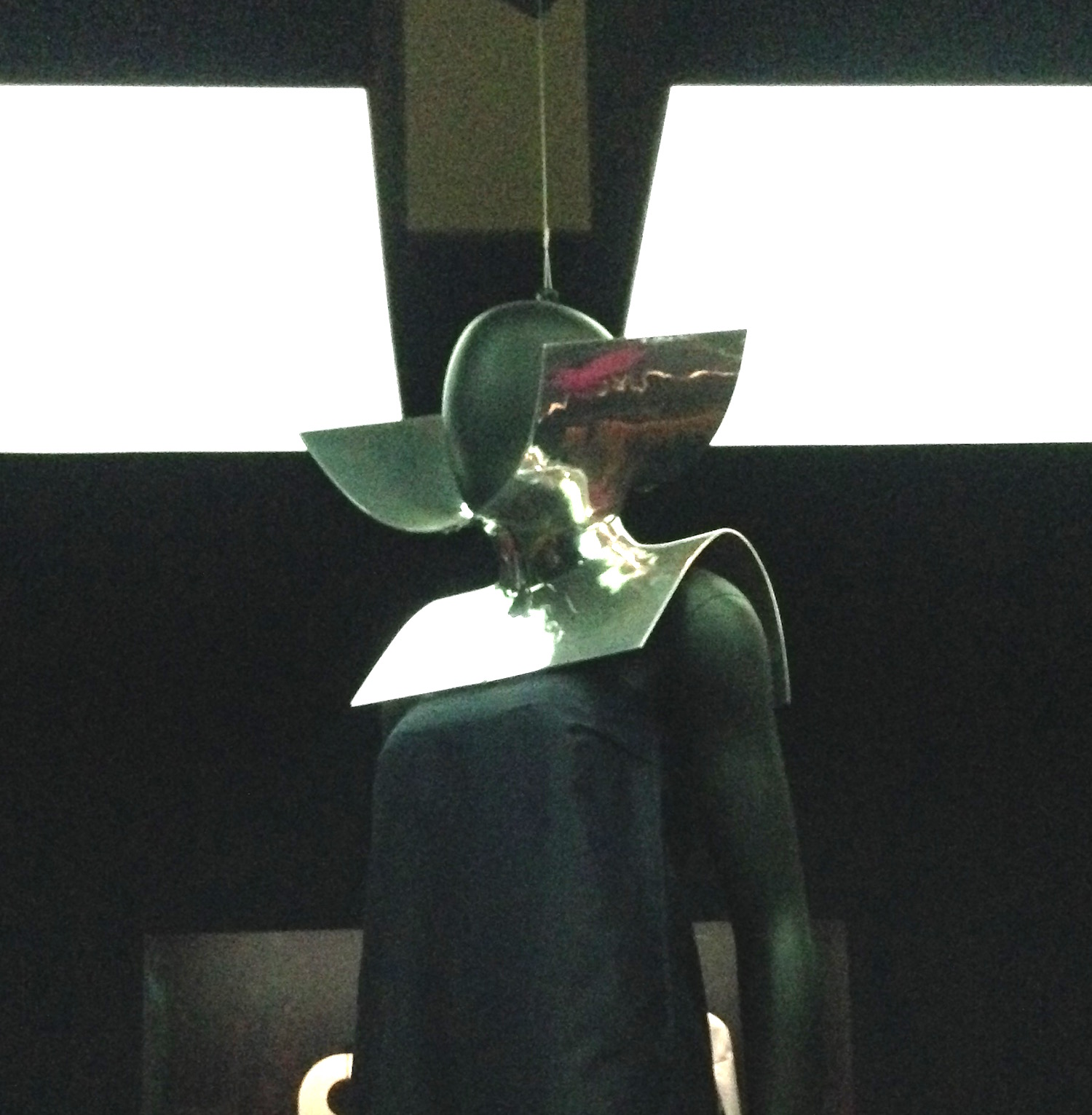 The museum had a lot of works that seemed to be crafted for them specifically. It was nice catching glimpses of how the museum itself had fitted into the history of modern art – a self-awareness that's lacking in a lot of museums.

The Anne Frank House is in the west of Amsterdam, and you should definitely pre-purchase tickets. The line to get in was about an hour long, even at night. We had timed tickets and didn't have to wait at all for our 8pm slot. 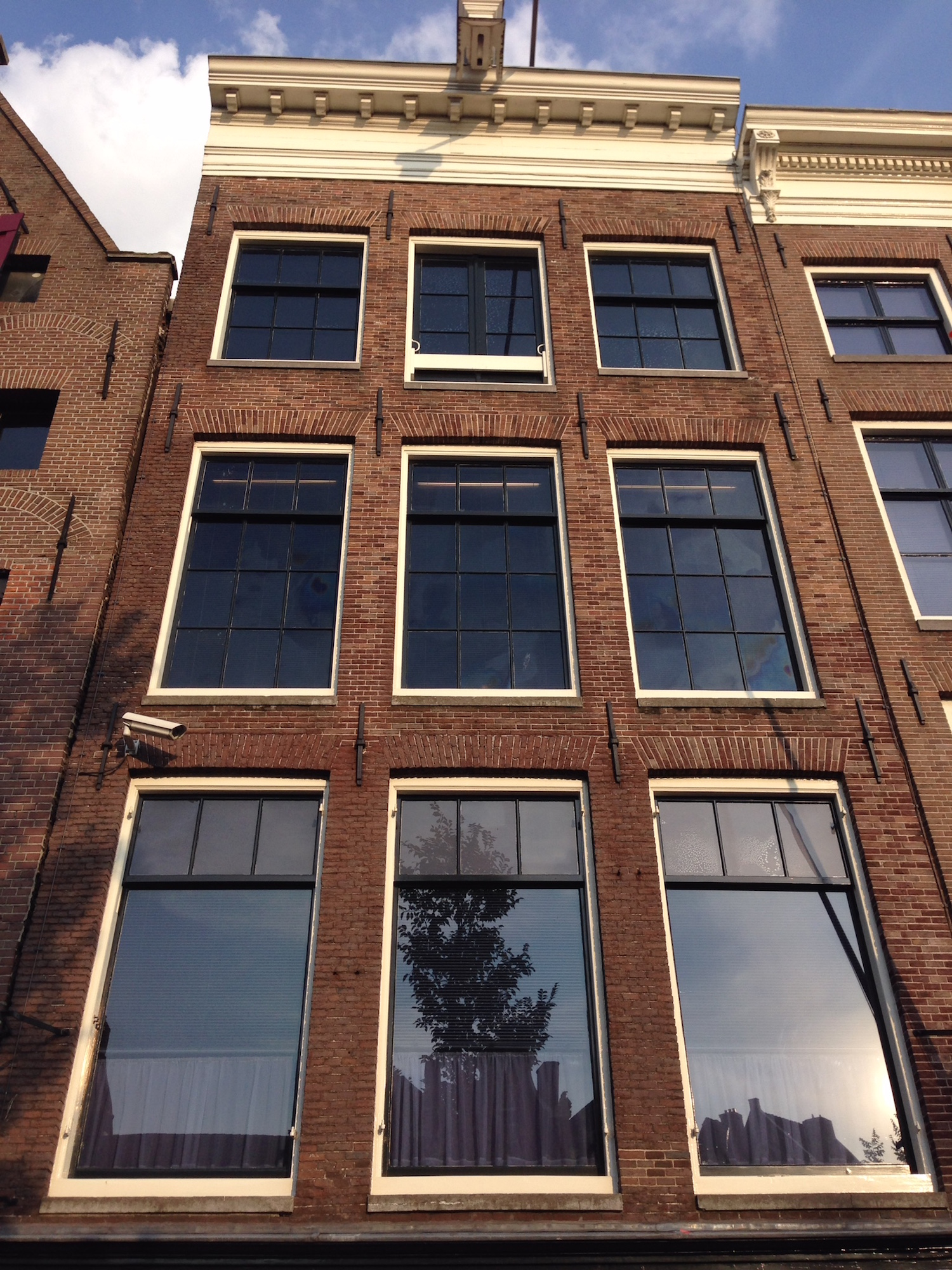 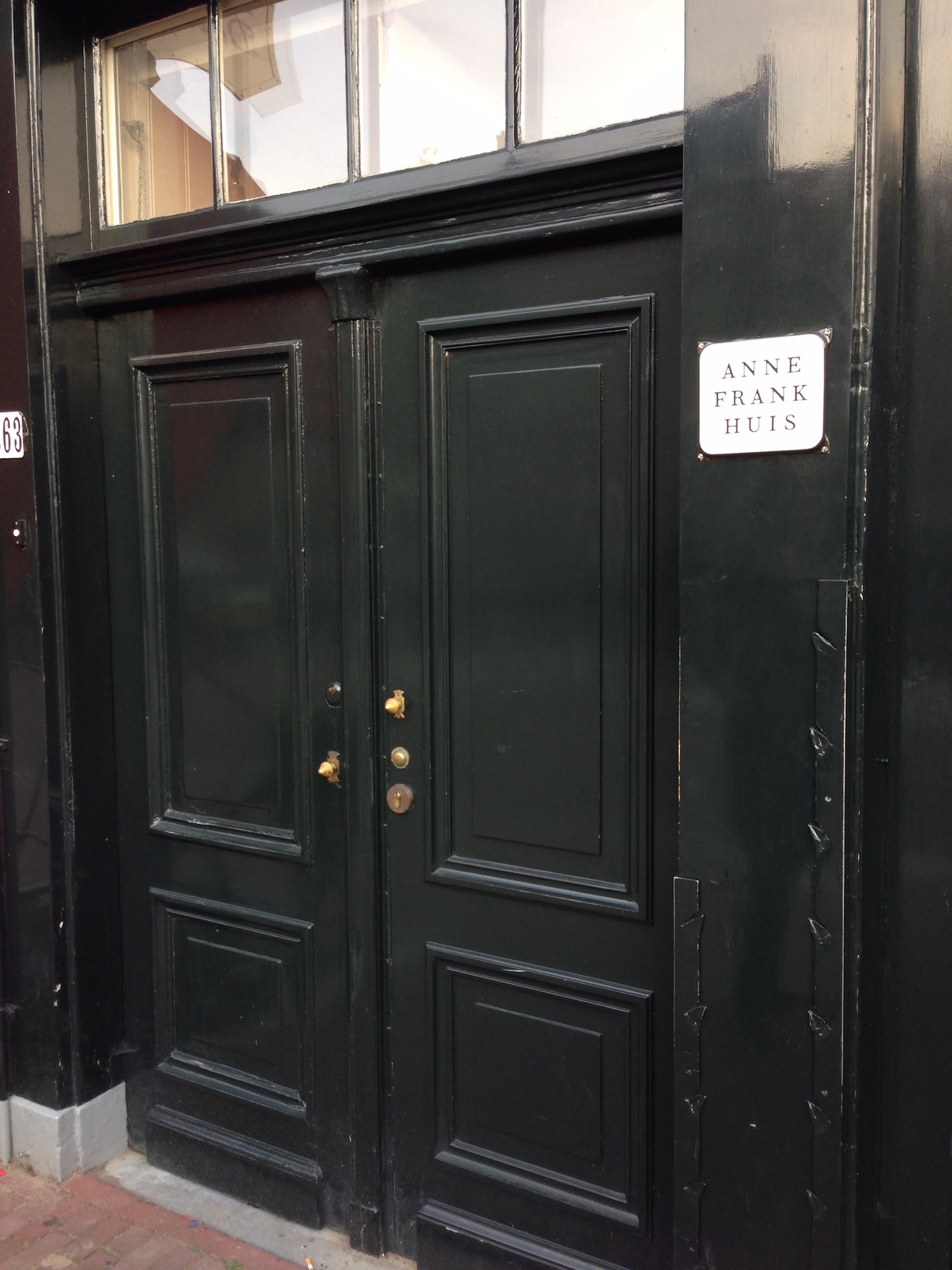 Main door (you enter the museum a couple of doors down)

I'd never read The Diary of a Young Girl before, so I started it in preparation for visiting the house. I'm certainly glad I did – it made the house much more atmospheric. It was strange reading the diary and later on that day seeing quotes on the walls from the diary itself, or reading the actual page on which she wrote that entry.

Inside the house, you can't take photos. But it was incredibly well-preserved. You walk through the old warehouse and offices in the front of the building, through a secret bookcase (the actual bookcase that was built in 1942 for the purpose of obscuring the hiding place) and into the annex. I was expecting an attic, but the living space was split over two floors and certainly more of an "annex" to the main house.

In Anne's room, she had glued pictures onto the wall from a magazine she used to have. The pictures were still there – it looked like a normal child's room. There were marks on the wall measuring how tall Anne and her sister had become over their two years in hiding. It was incredibly moving seeing remnants of a life that you knew didn't end well.

There were also exhibits on the diary itself (the actual diary she wrote in) and her father's role in getting it published. Both Anne's father and the people who helped keep the annex a secret lived long after the war, and helped to put together the museum. There are video clips of them talking about their experiences, which adds an extra level to the museum.

I'm not sure I can say I enjoyed the museum, but it was deeply humbling and emotional. Definitely a must-do if you're in Amsterdam.