Berlin: How Do You Think It Feels

Berlin doesn't feel European, and it's not quite like anywhere else Hampton and I have visited. It doesn't really seem to fit any classification, there's so much about it that's unique. I get that other cities have unique qualities. Paris has... Parisian things about it that make it unique – but it still feels European. Berlin does not. Maybe it's because of its recent tumultuous history. Maybe it's because the idea of "Europeanness" includes Paris, and London, and Rome, but somehow left out Berlin. For whatever reason, it's an alluring city that we made a point of returning to.

Last time we visited Berlin, we stayed in Prenzlauer Berg, a hip ex-East Berlin neighbourhood in the north of the city. This time, we chose to stay in Kreuzberg.

Along with Prenzlauer Berg and Friedrichshain, Kreuzberg is considered to be the trendier, less-polished side of the city. Although technically in West Berlin during the separation of Germany, Kreuzberg was on the eastern edge of the city, so was relatively underdeveloped. Since the fall of the Berlin Wall, all three neighbourhoods have undergone varying levels of gentrification.

Coming from the obvious beauty of Prague or Amsterdam, Berlin was a little brutal. On our block, there are multiple featureless, indistinguishable mid-1970s apartment complexes. They're covered in graffiti and look pretty drab. 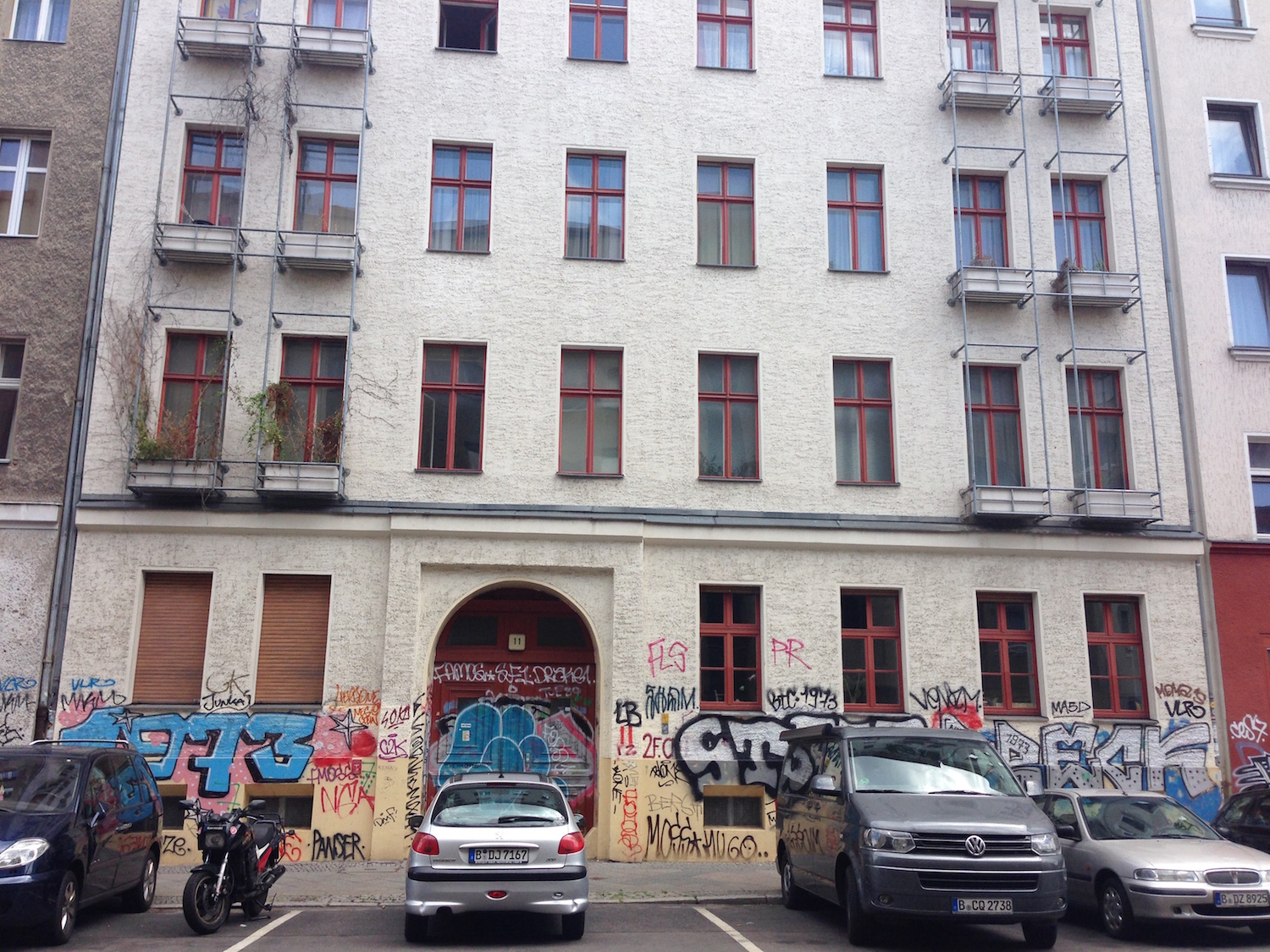 So far, I'm probably not painting a great picture of Berlin, am I? The thing that really draws Hampton and me to the city is the people and the atmosphere. I'd call it artistic or care-free; I'm sure an American could equally describe it as entrepreneurial. Confused? Let me try and describe an example.

We're staying just off the Spree. It's a little industrial along our side of the river, with brick warehouses and lots of gates. We saw some place recommended on FourSquare along the river, but weren't that sure where it was. After walking through what looked like a gate to an industrial estate, we saw a couple of shipping containers stacked on top of each other with a 1970s car on top. 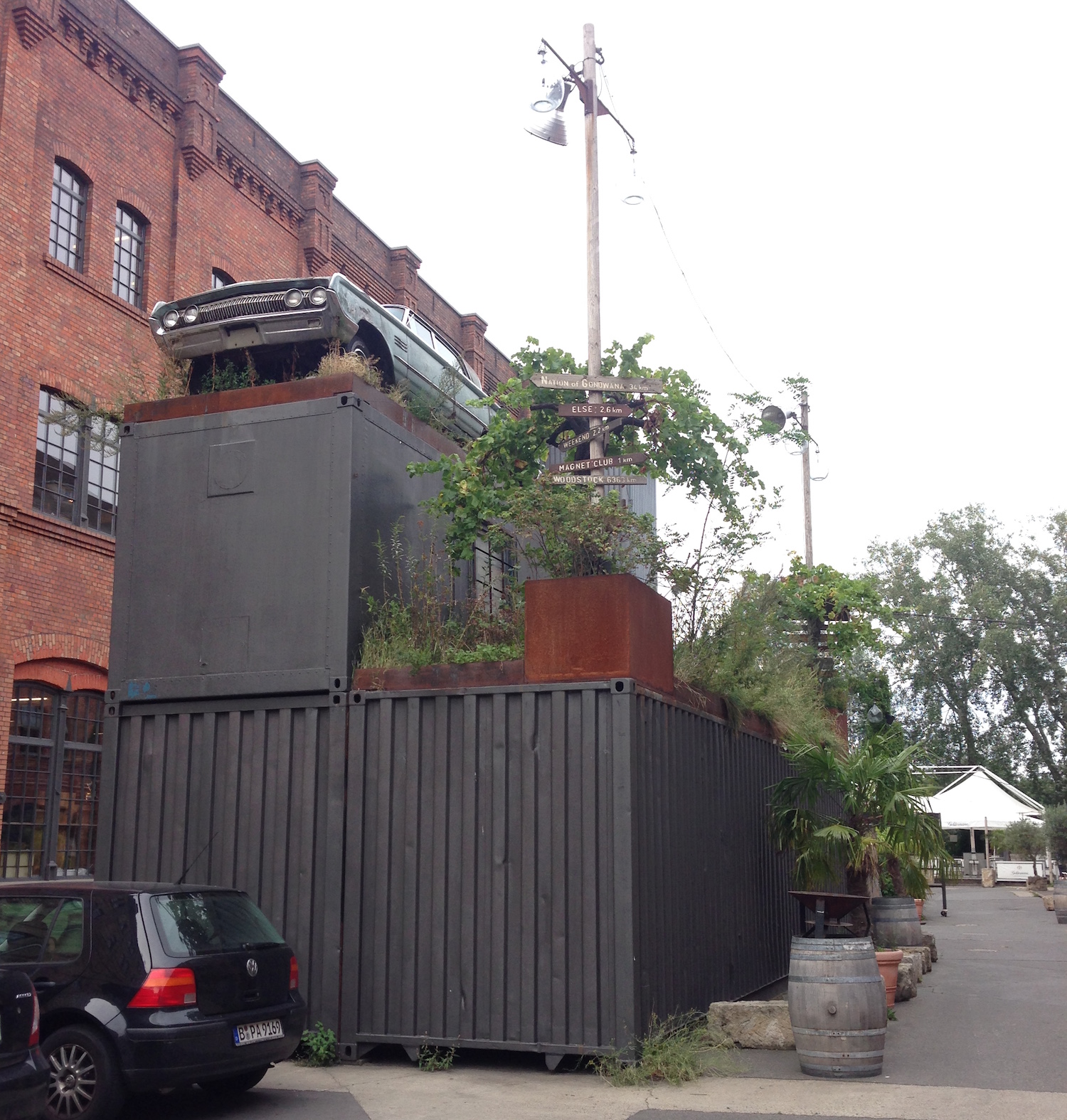 As you continue walking towards the bank of the river, you see a makeshift beach. 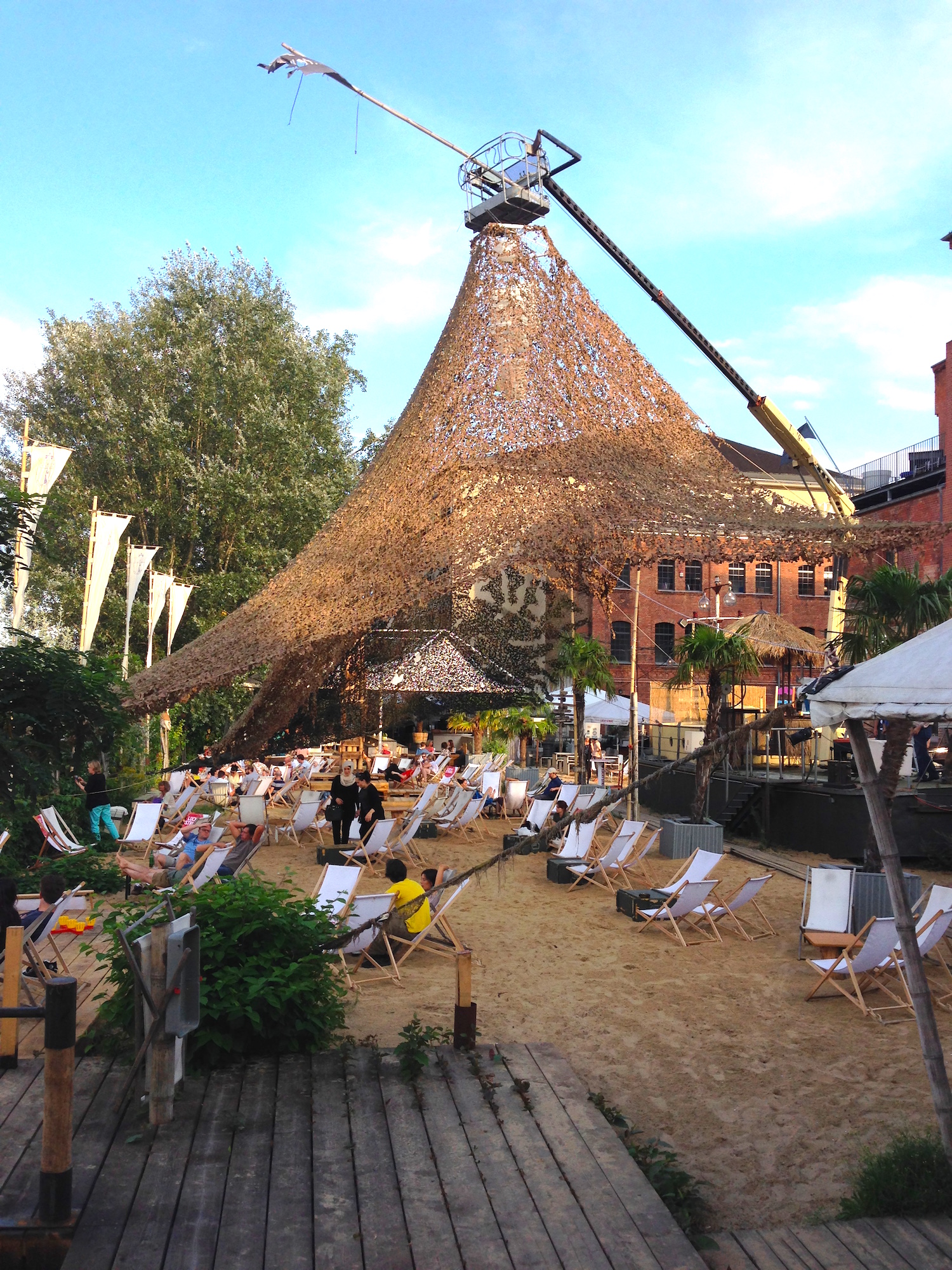 And there's this wonderful bar, hidden away, popular at all times of the day. Kids are running around playing in their sand as their tattooed, mid-thirties parents sip an Aperol and soda. There's grey-haired couples drinking tall beers, reading books. And right across the river is one of the longest still-standing stretches of the Berlin Wall. 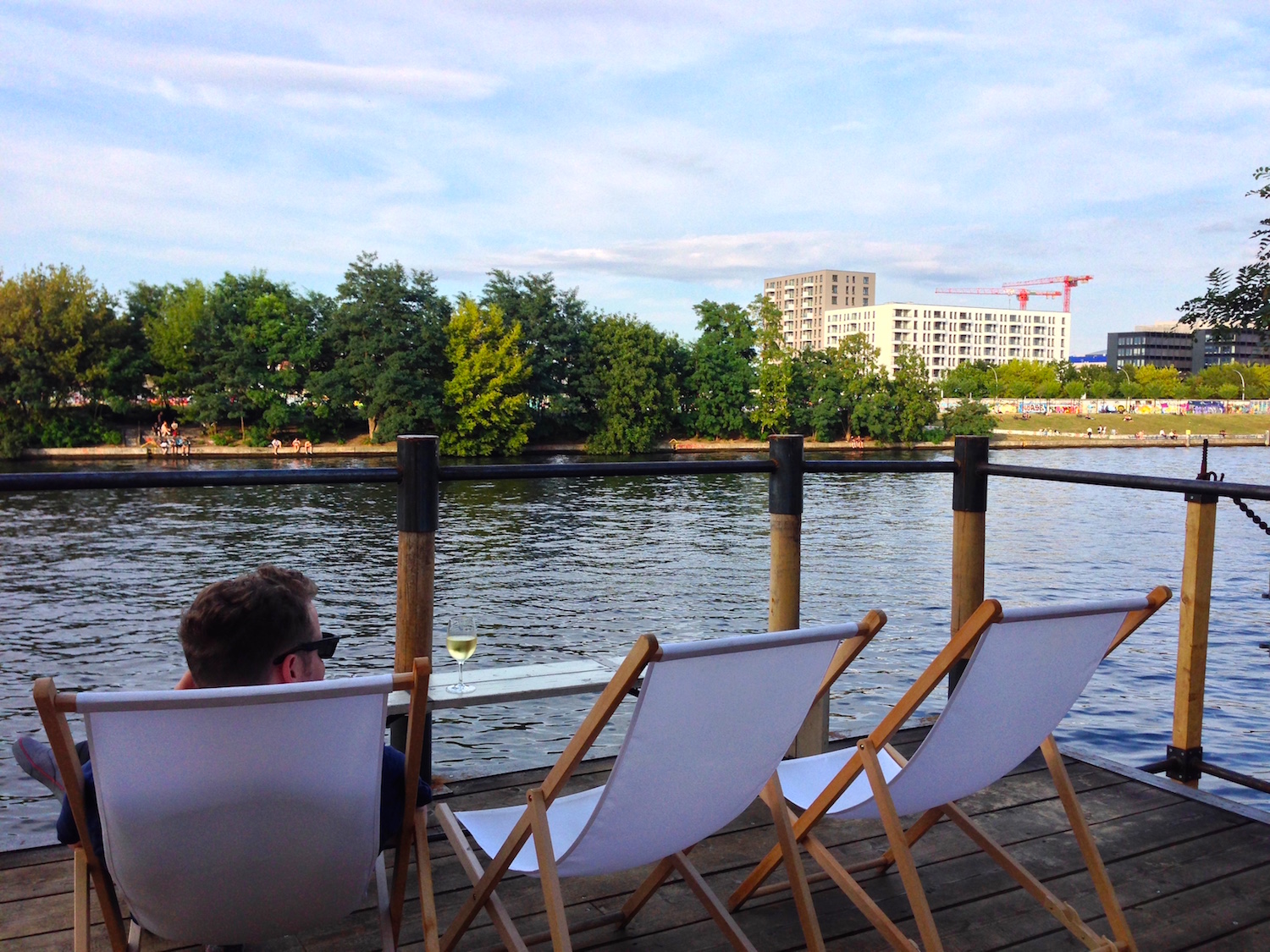 View over the Spree and the Berlin Wall

Berlin is such a strange mixture of rule-following, energy, and laissez-faireness. People are frenetic and excited on the streets, playing loud music and drinking and rushing to the next bar... before languishing the next morning over a three-hour brunch. It takes a while to get used to, but it's something that I find very energising and disruptive.

One of the strangest moments so far was going for karaoke with the Travis CI folks. The karaoke bar was just across the river from Kreuzberg, in Friedrichshain. To get there, we walked along the Oberbaum bridge, which used to be an East-West border crossing.

We then walked past a stretch of the Berlin Wall, which was turned into an open-air gallery soon after the unification of Germany. 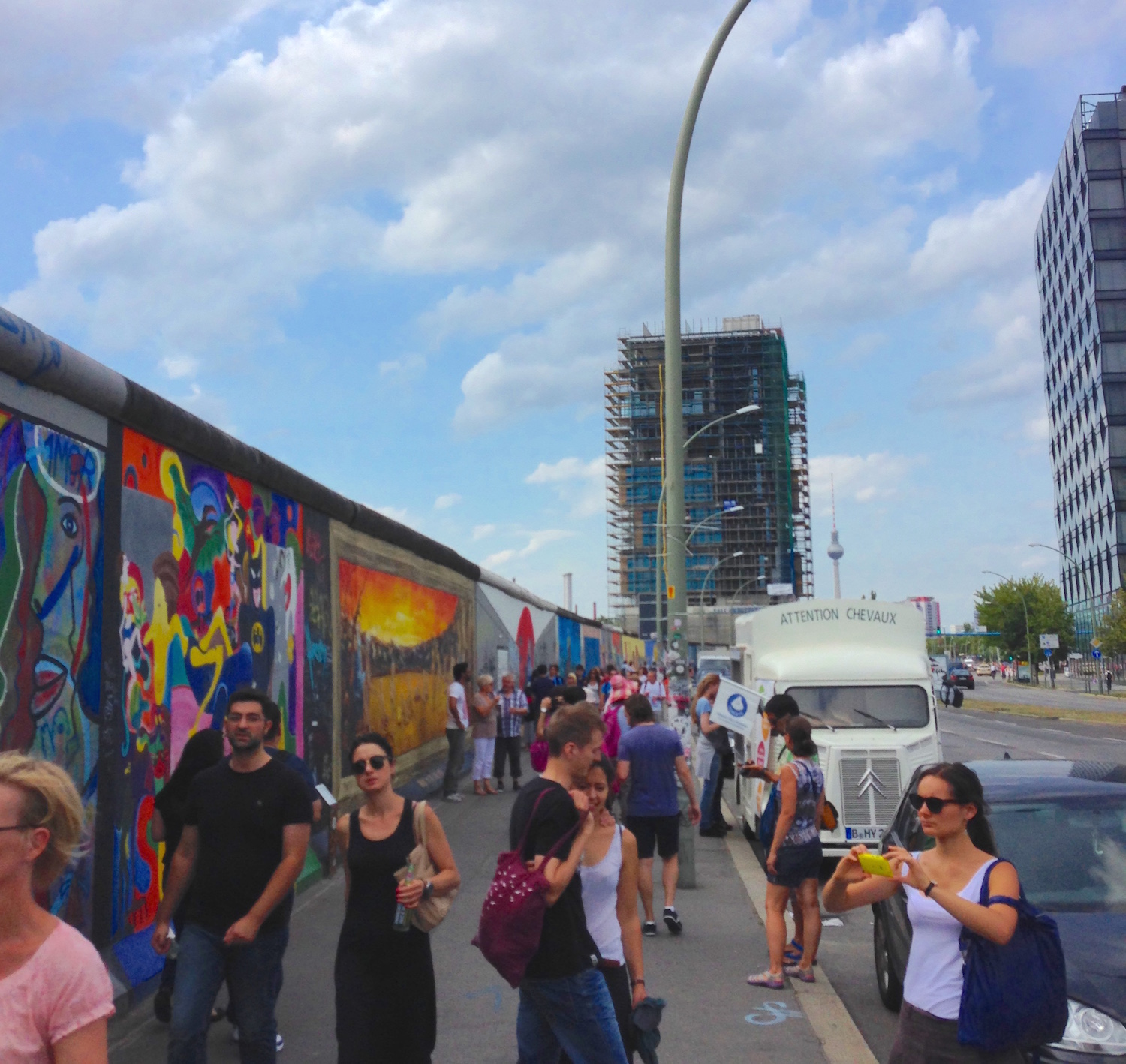 The East Side Gallery

The gallery itself is really neat, and on a separate occasion we took a longer stroll along it.

Anyway, we got to karaoke, sang a few songs, drank a few beers. Then someone put on "Heroes" by David Bowie. Recorded in the 1970s in Berlin, it's about two lovers who can't be together: one is from East Berlin, and one is from West Berlin.

And there we were, singing about the horror of the wall, in a karaoke bar about 500ft away, having just crossed an ex-border crossing.

Above all, Berlin is wonderful and strange.