When I say "around Kreuzberg," that's a little misleading as we haven't really managed to explore the whole area. Berlin is pretty massive – more like London than Paris or New York. It's not that easy to walk to other areas (although we did take a nice stroll over to Friedrichshain a couple of times).

As you are probably aware, Hampton and I scouted out as many cocktail bars as we could as soon as we arrived. For the past two weeks, we've been slowly venturing further from our apartment to test out other places. Here's our list (and a handy map).

I'm not sure why, but there's a cocktail bar named after a noted American environmentalist: John Muir. To be honest, I only knew about him because I've made a couple of day trips up to Muir Woods. 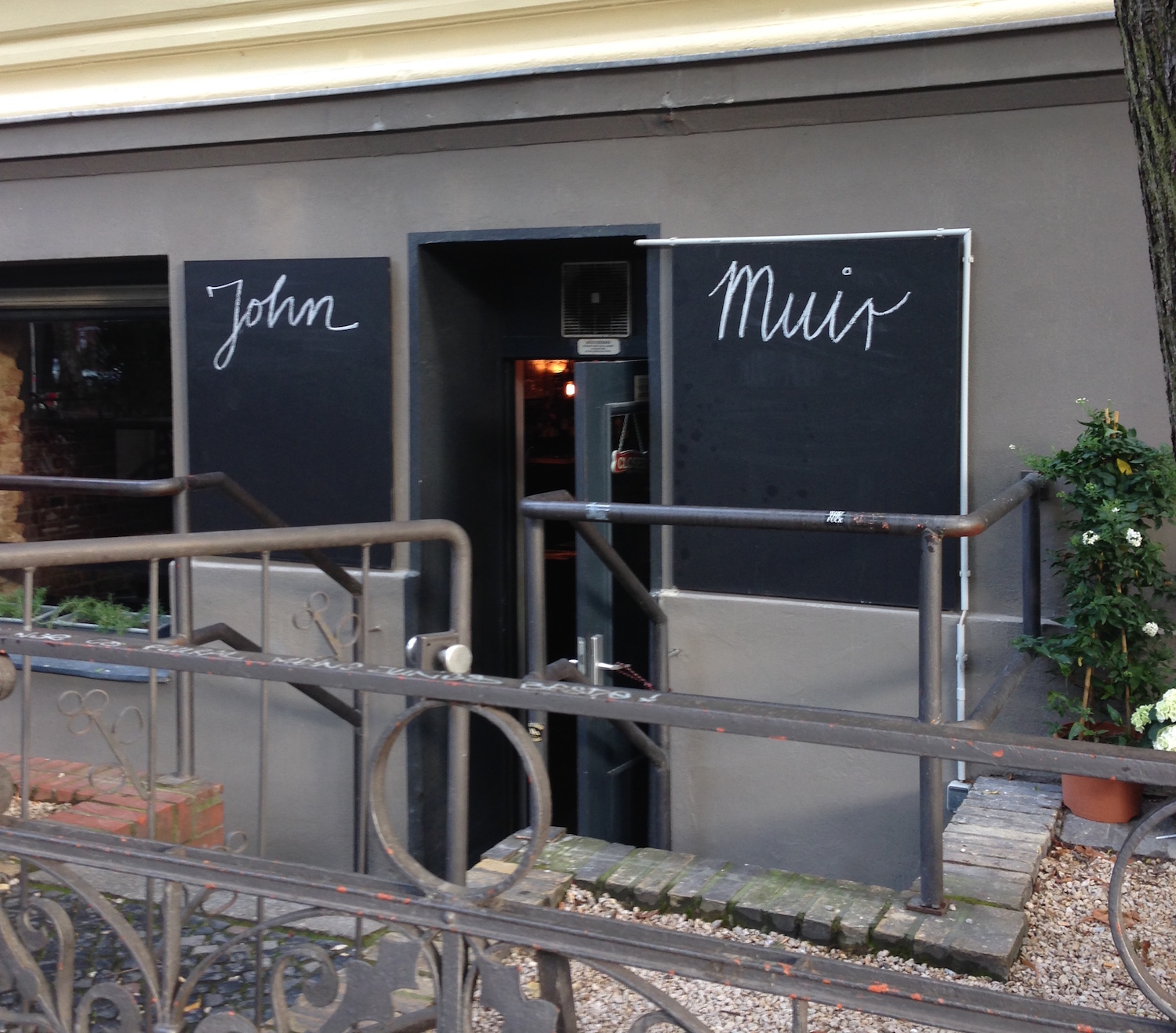 The inside is all exposed brick, with a couple of naturalist touches (like some stuffed animals). It's nice and cosy (but the bathrooms are disco-themed??). They have a regularly-rotating drinks menu and their custom drinks are really good. I got the Lightning Bug, which was a citrus-gin thing with some other delicious extras (honey and lillet, I think?). 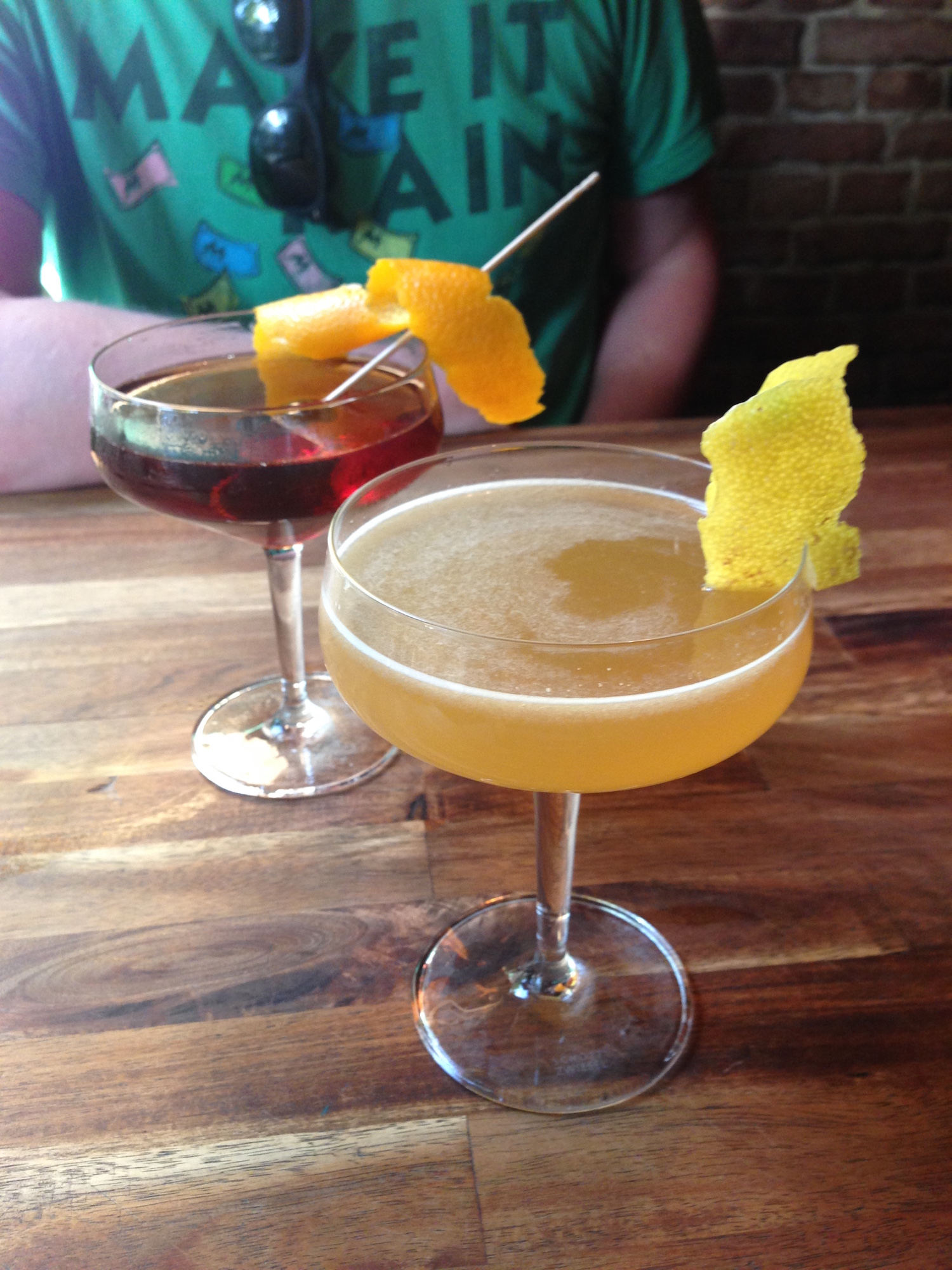 Lightning bug and a manhattan

I tried a couple of other cocktails on offer, and they were also excellent. It was strange that it never seemed to get too busy. Most people ordered beer or wine, and I wanted to shout at them because the cocktails were so tasty. Overall: 8.0/10

Not far from John Muir is Kirk Bar. Again, not really sure why it's named that. Star Trek reference, maybe? Nerds. 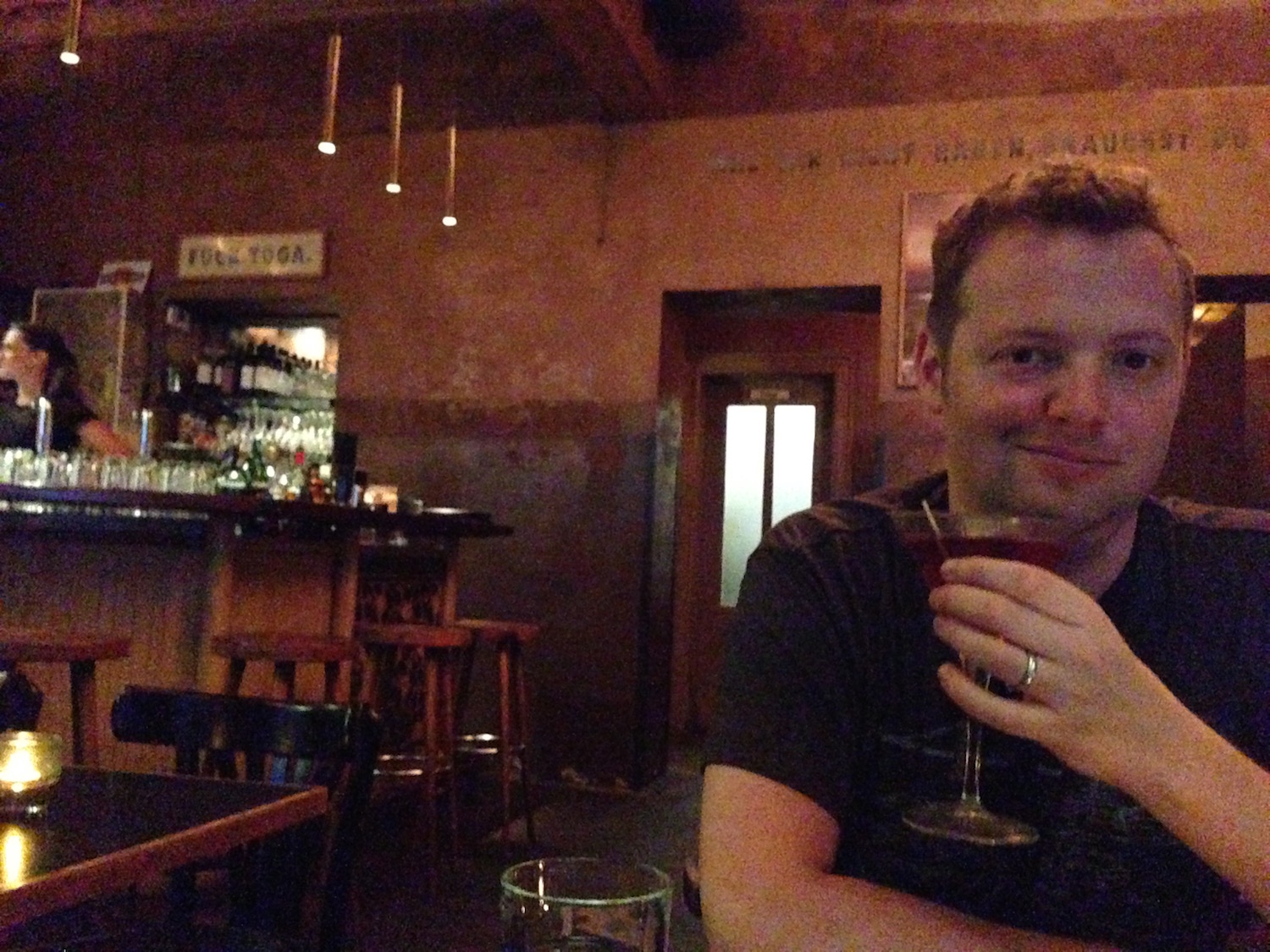 The inside is pretty bad-ass. It has a real crumbling old-timey feel, with a patina most bars wish they could get. Beautiful cornicing and high ceilings. The first time we went, I was pretty drunk so I'm not sure what I ordered. I think it was a gin sour – but I remember thinking it was good.

When we came back, I was more sober and remembered my drink order – a Hemingway sour. It was the same as a regular gin sour, but with grenadine added. (I thought Hemingway liked rum?)

On the left, a gin sour (?), on the right, Hemingway Sour

I talked briefly about Sage in my previous post – it's the bar on the water. Well, there's also a restaurant in a warehouse building just inland from the beach area. I'll talk about the food in another post, but I had a pretty amazing cocktail there. It was called the London garden and looked like a juice drink I'd find in San Francisco. 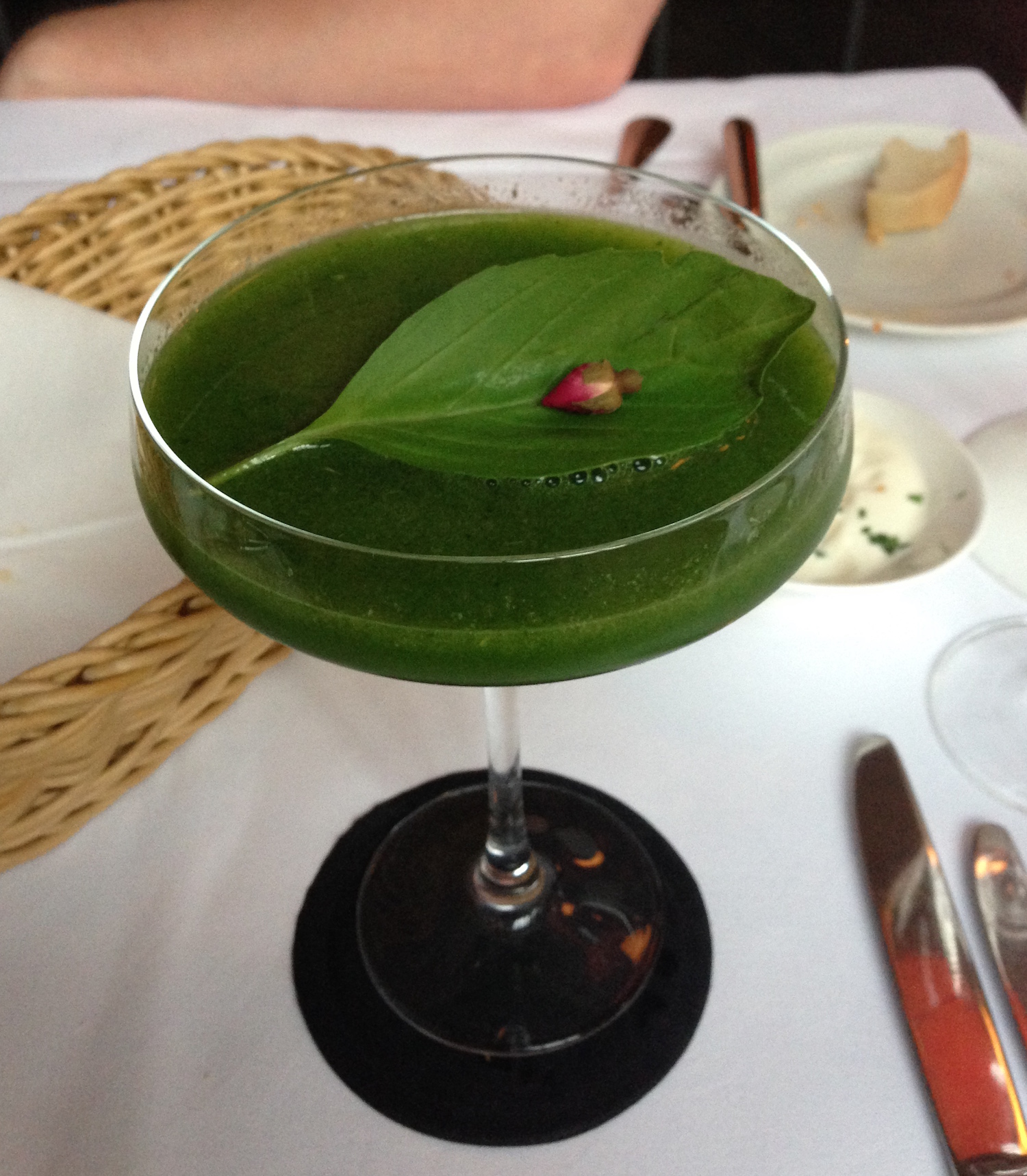 It wasn't too sweet or too savoury, and it had the right amount of texture to it. It was so much more drinkable than those juices you find. Maybe it's the fact that it had alcohol in it or maybe it's... no, it was definitely the alcohol. Overall: 7.2/10

Homes was a little further away from our place, but we'd read good reviews so we made the trek. It was decorated more like a casual coffee shop than a bar – it was very open, with low seating and "cool" murals on the walls. 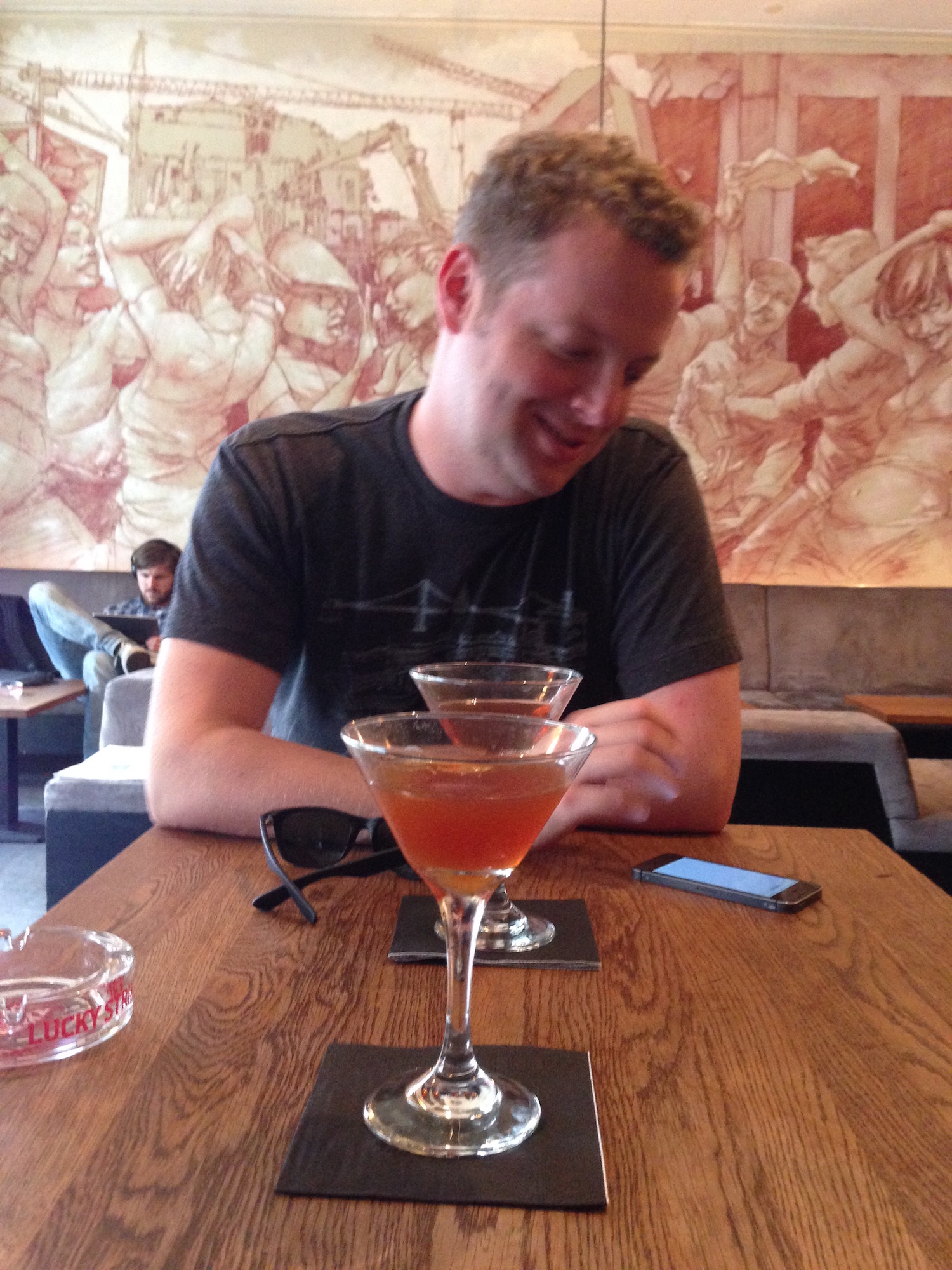 I guess it's a little unfair for me to be that dismissive – we were there pretty early for Berlin drinking time. Berlin is a very late city – people only consider going to a bar or club at midnight. I'm happy to be in bed by then. It also means that bars are pretty empty around 7pm which means (yay) there's usually little wait but (boo) we're usually the only people in there.

Anyway, the drinks at Homes were passable. I got a gin-cacao-lillet thing that tasted way better than the ingredients list suggested. 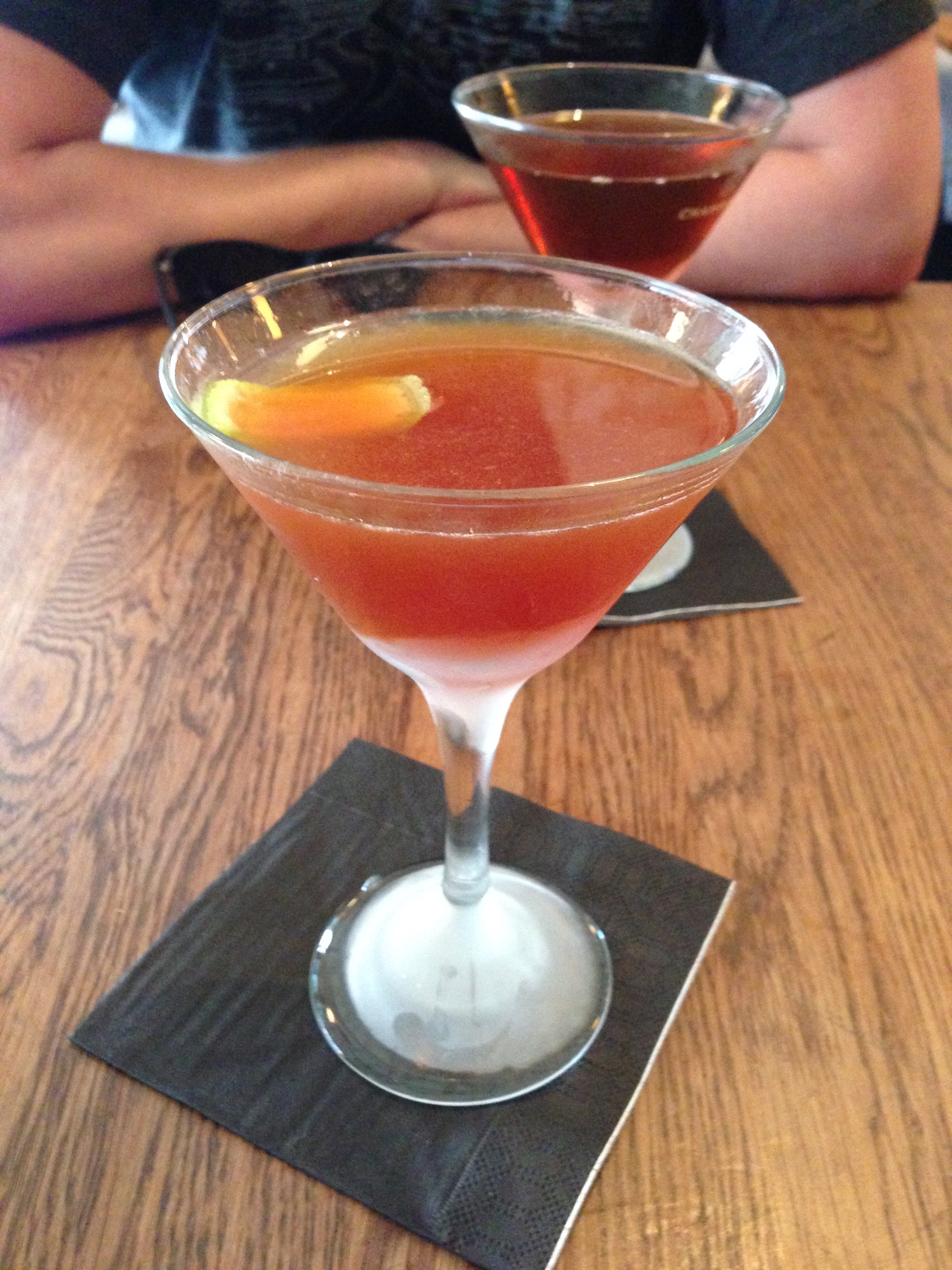 Schwarze Traube ("black grape") was our first cocktail bar when we arrived. It's less than a block away from where we're staying and it had really good reviews. I was pretty excited.

The door has a sign saying you have to "knock and smile" to enter, which I did. The bartender was not happy to see us. She kind of pointed at some seats before going back behind the bar. The place is pretty small – two or three tiny rooms. The decor is great, though, with lots of fraying antique chairs and side-tables.

The bartender came over and told us they had a gin-based special drink. I ordered that one, and Hampton ordered a manhattan (which elicited a big sigh from the bartender). I like the idea of a no-menu, bartender-curated drinks list but only if the bartender is nice. Anyway, the drinks came after about fifteen minutes (which was weird, as we were the only people in there). They were really bloody good, and served in equisite, delicate glassware.

After we'd finished our drinks, we had to wait another twenty minutes of the bartender disappearing and/or ignoring our requests for the bill. Great cocktails, but not really worth the lacklustre service. Overall: 5.6