There's a great indoor market called Markthalle Neun that's about a block away from where we're staying. It's not a traditional market in that there are people selling stuff every day. On a normal day there's a handful of stands or mini-kitchens selling locally-made food, wine, and other stuff.

On Thursdays, however, there's a "street food" gathering where a lot more people show up. All the booths are filled with people selling their food – everything from pancakes to samosas to steamed buns. There's also a couple of food trucks outside, too. It gets incredibly packed, but it's a lot of fun. 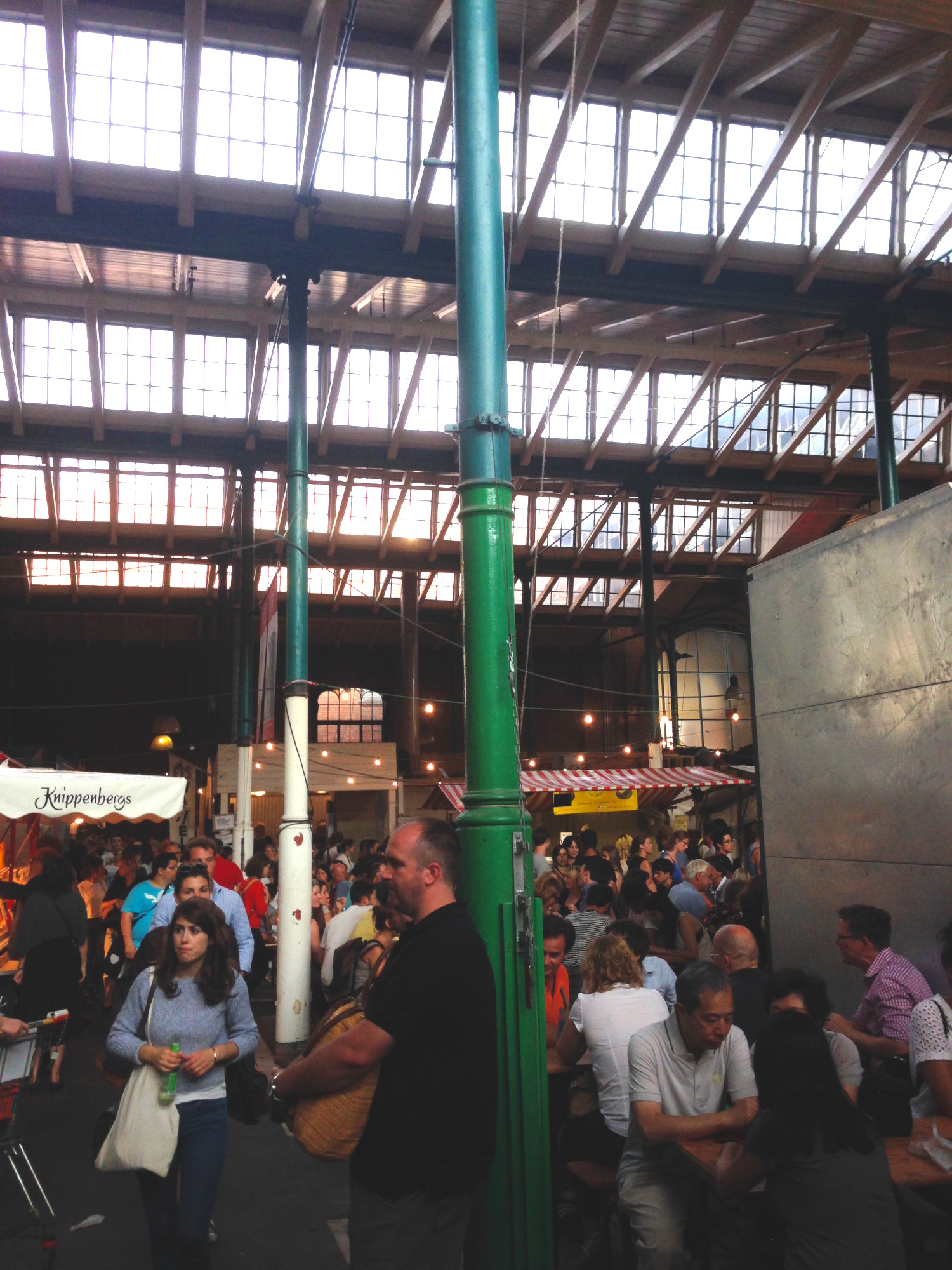 There's also a Sunday morning "breakfast market," which has more of a focus on breakfast foods.

We've been to a couple of these events, but mostly we go on weekdays for lunch. There's such a wide variety of food there it's difficult to go wrong. Anyway, I've taken pictures of pretty much everything I've eaten there, so this will mainly be a bunch of pictures of delicious food.

The best thing I've had so far has been the barbeque from Big Stuff Smoked BBQ. It blew away most of the BBQ I've had in the USA. 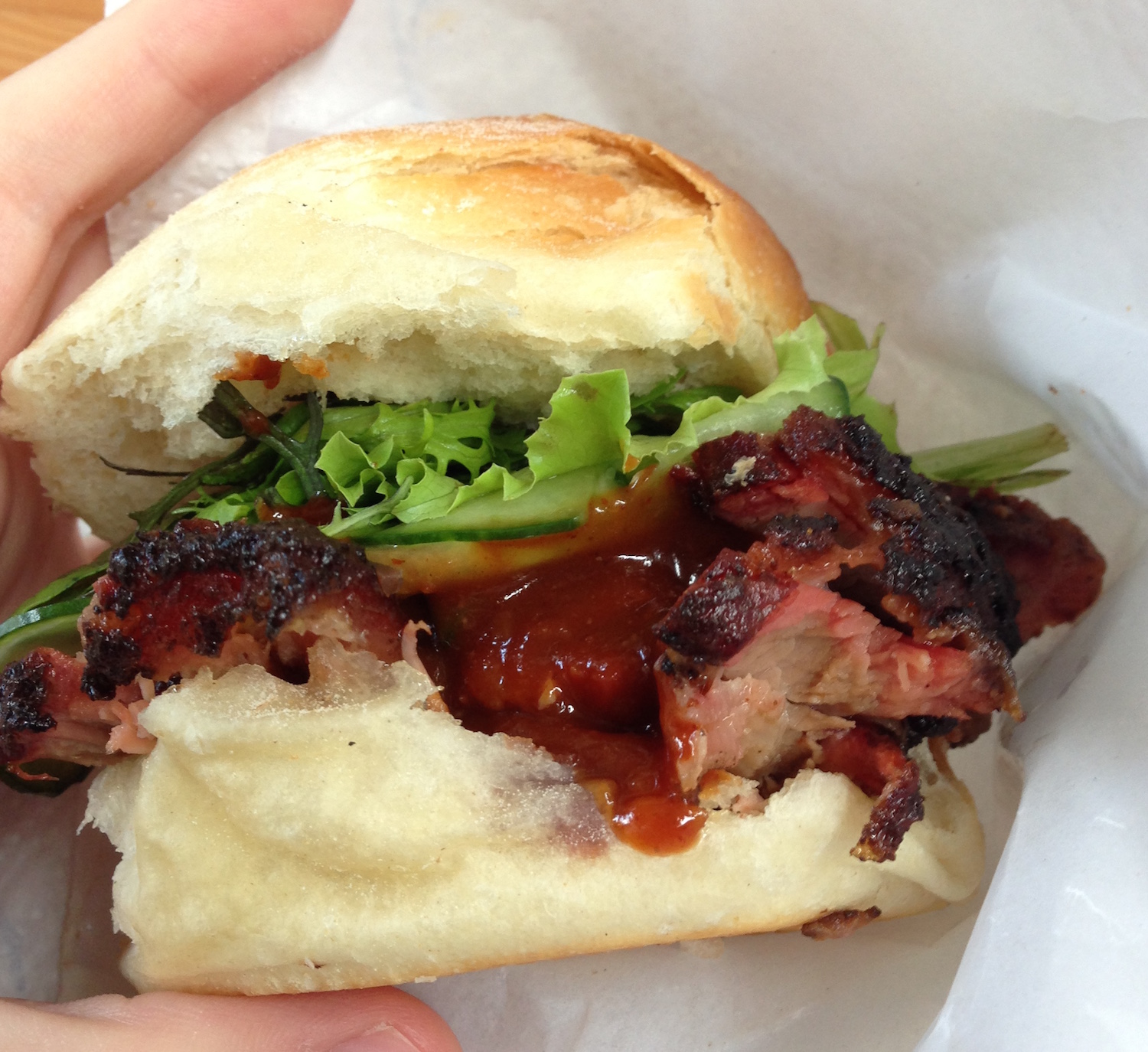 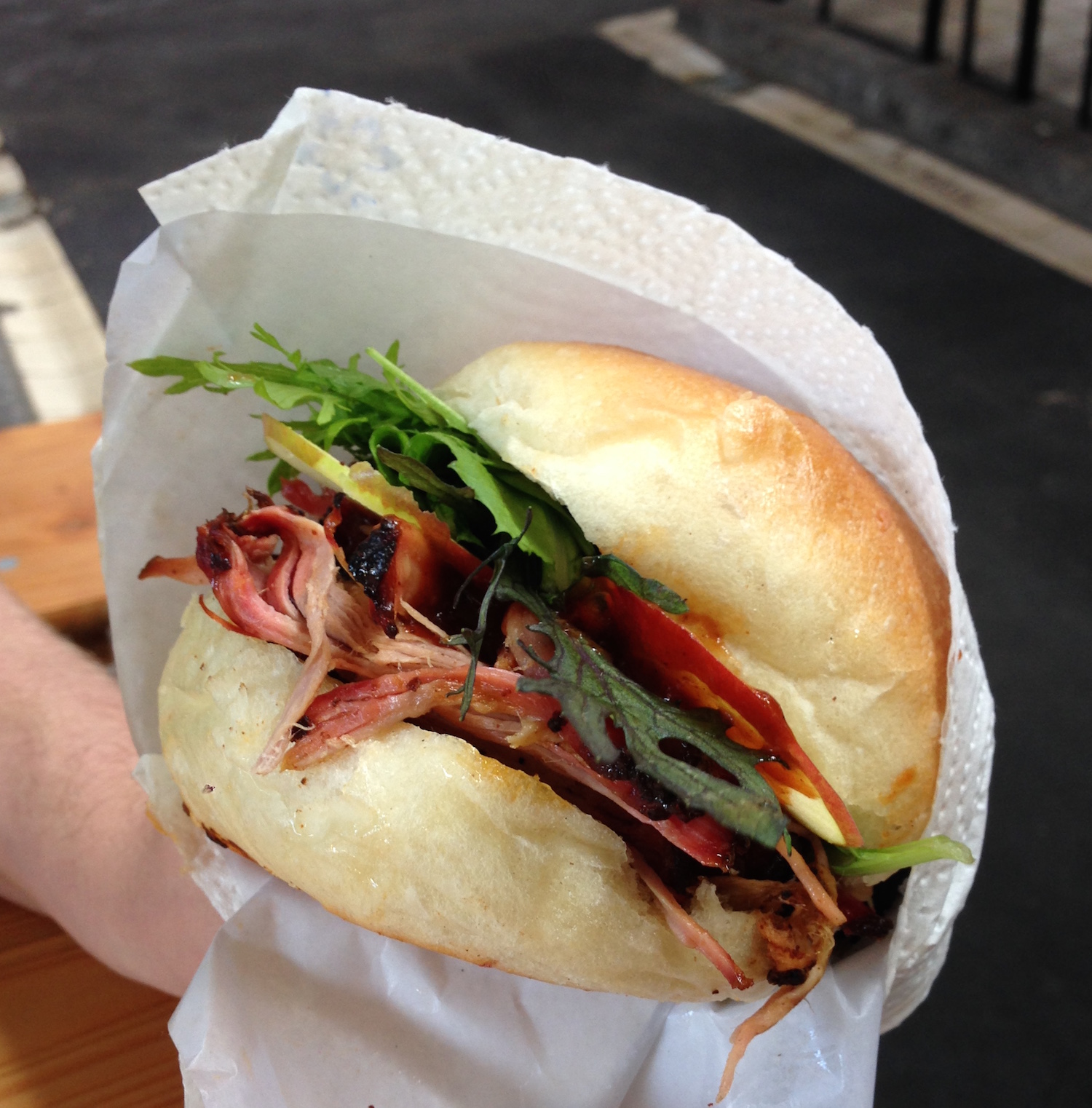 There was a Vietnamese stall that did rice-stuffed rolls and some steamed buns. 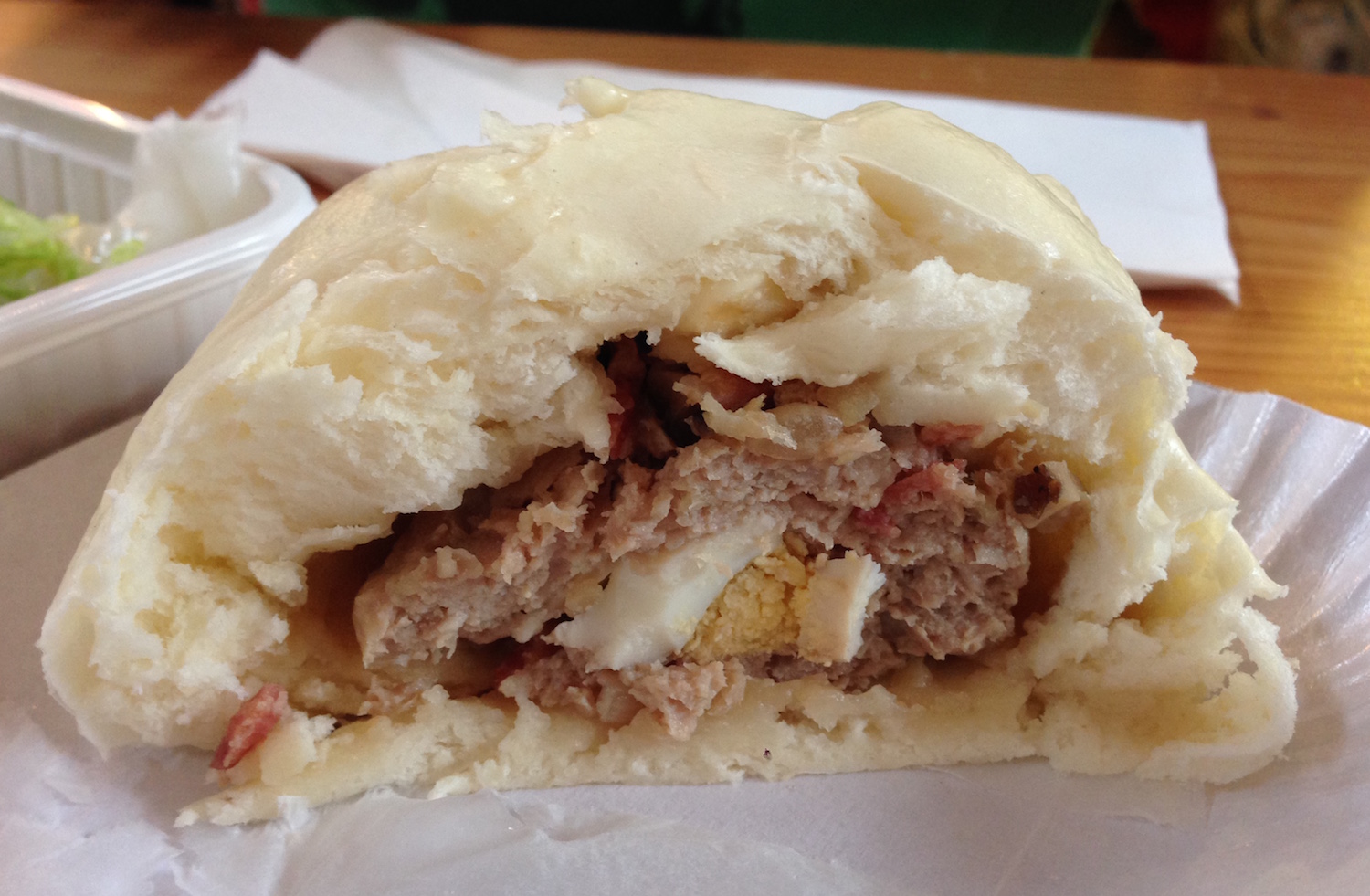 Steamed bun with pretty much EVERYTHING inside 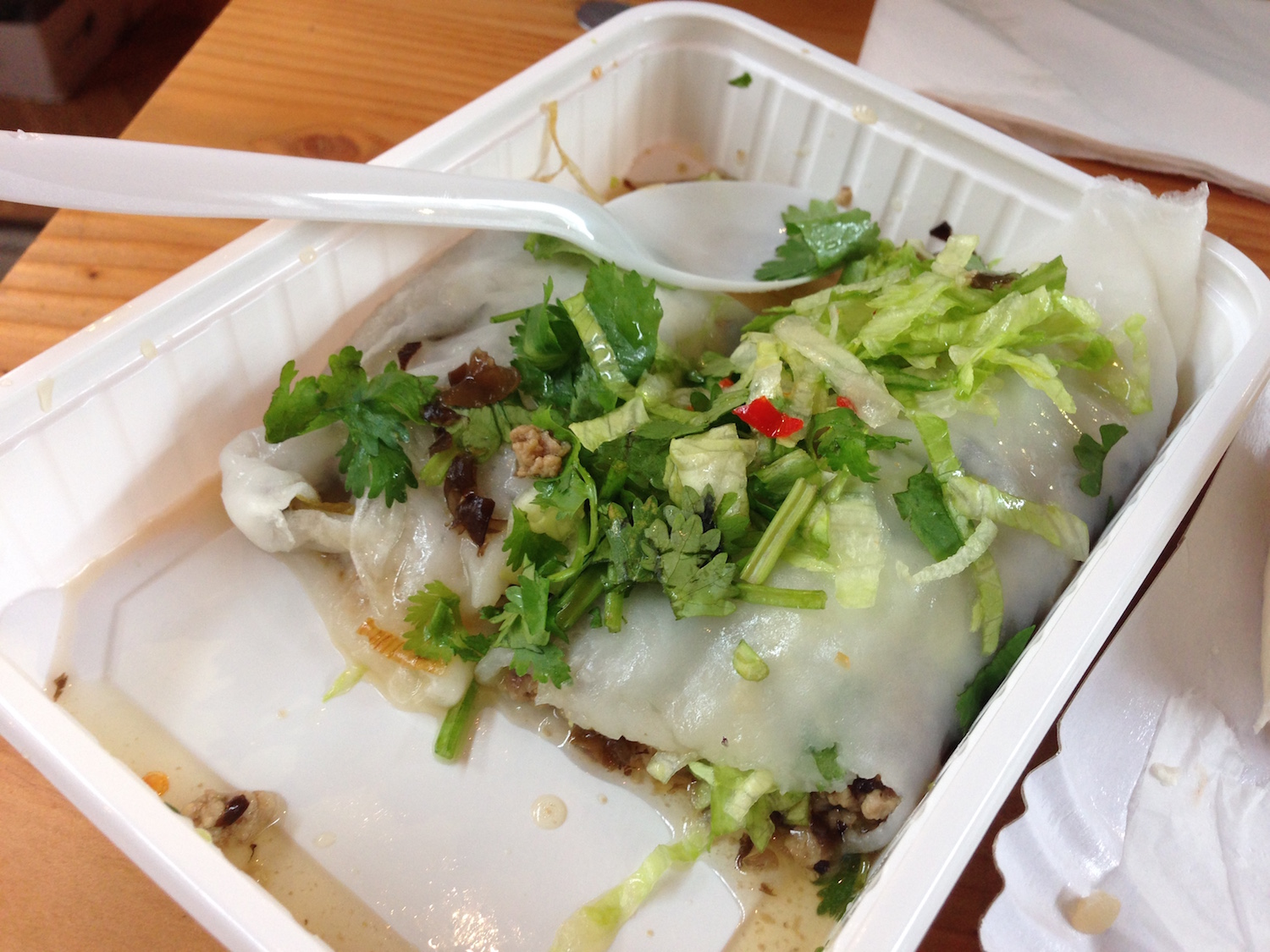 Delicious rolls with rice and meat inside

There was a great vegetarian burger place. We accidentally went there because it had the shortest queue. Then we found out it was vegetarian, almost left, but stuck with it. The burger was so good! I think it was tofu or something, but it was mainly tasty cause they slathered it in peanut sauce. 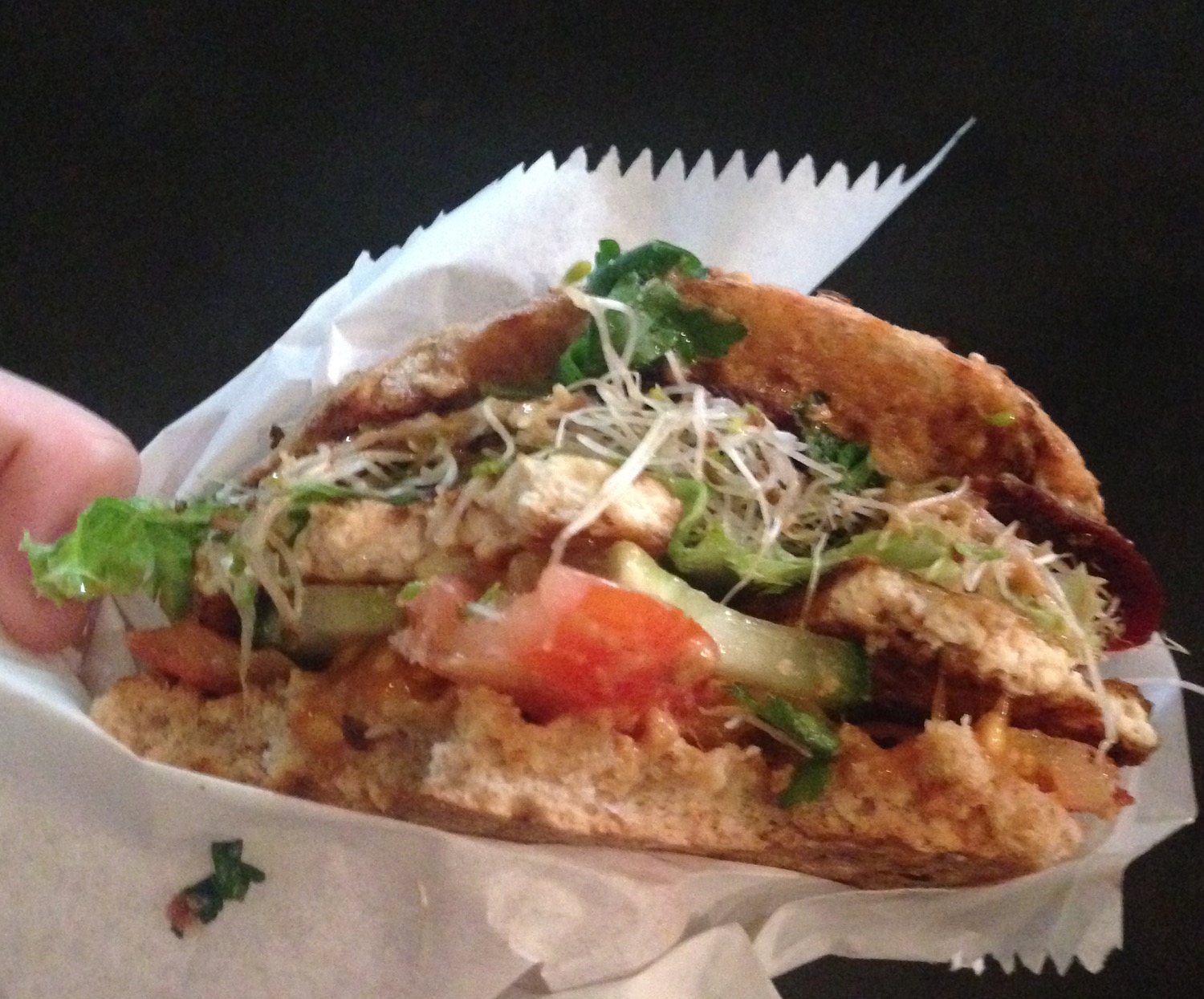 The best veggie-burger I've ever had

The next place I went to, I had their veggie-burger but it sucked, so I went back to eating all meat all the time.

I'm English so I love savoury pies. What luck! There was a pie place in the market. I got a cheese and mince one and it was SO GOOD. I would eat ten more right now.

Cheese and mince pie (note: not that kind of mince pie, which would probably be gross with cheese in it)

If you don't like pies (like Hampton), you can get a reuben sandwich! It had pastrami on it. Apparently this guy from Portland moved to Berlin and was upset he couldn't get decent pastrami... so he opened a deli! 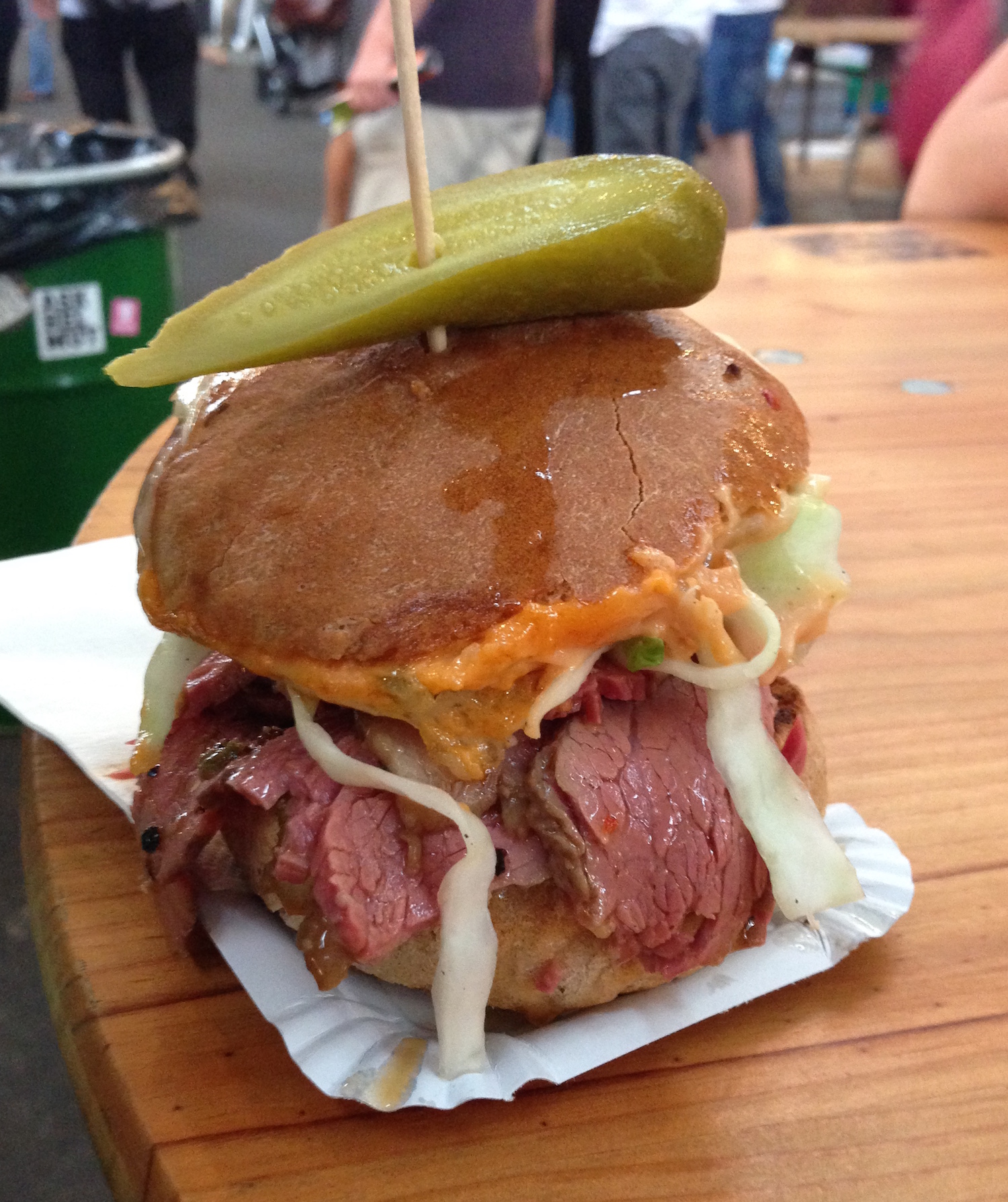 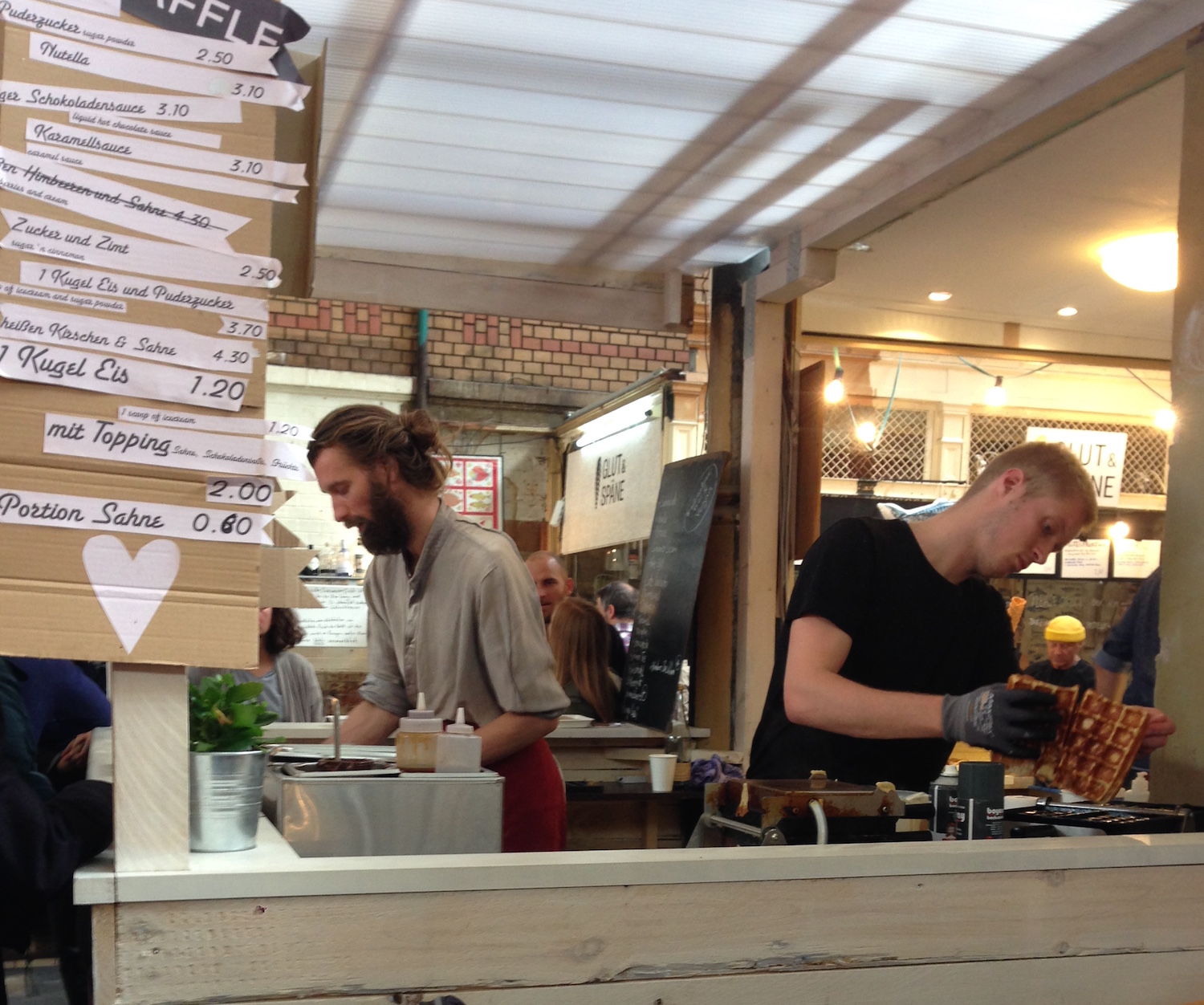 Usually I'm not the biggest fan of waffles, but these were so good. Crisp on the outside and moist on the inside. Oh, and covered in caramel sauce. 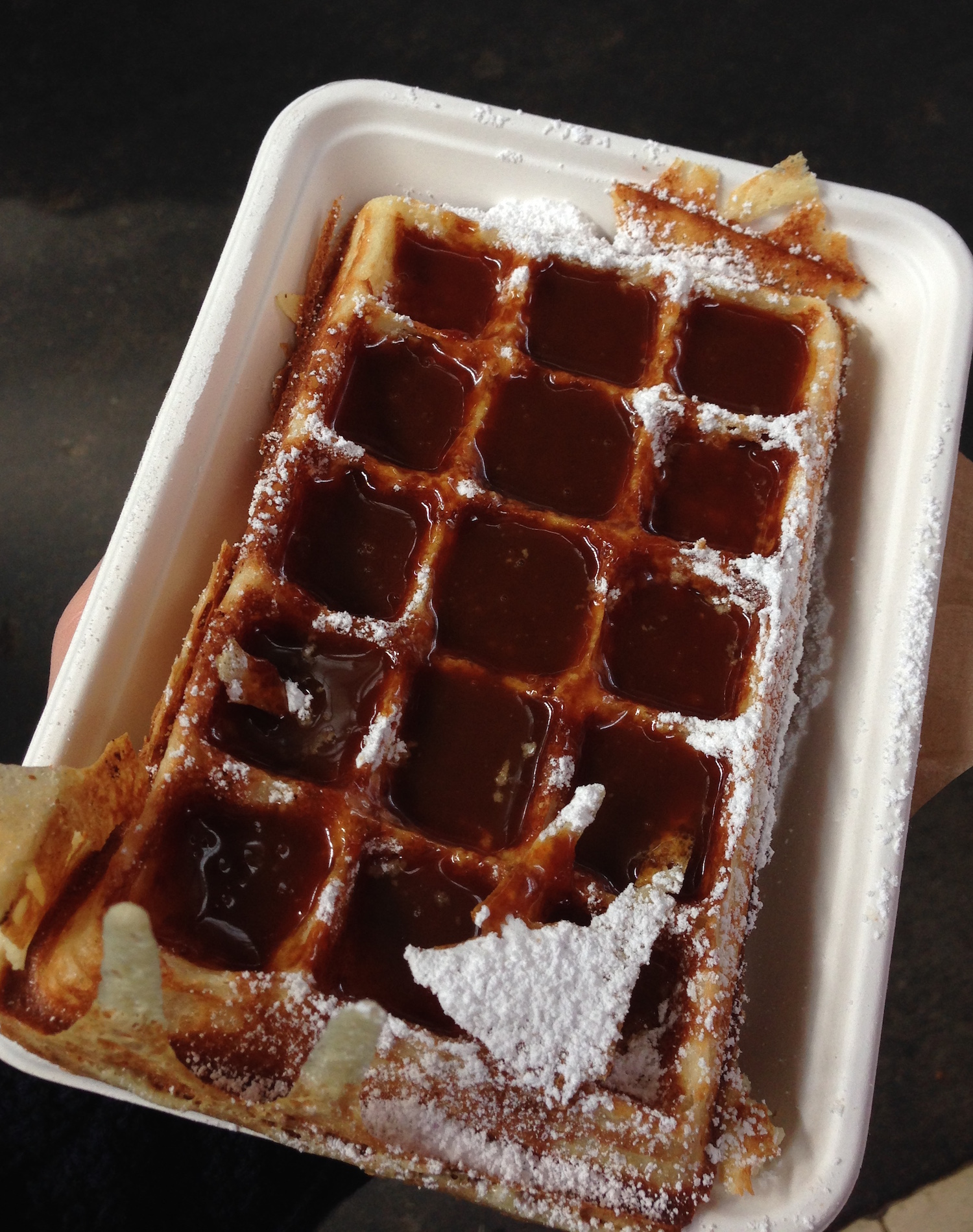 The waffle place also did some crazy ice-creams... 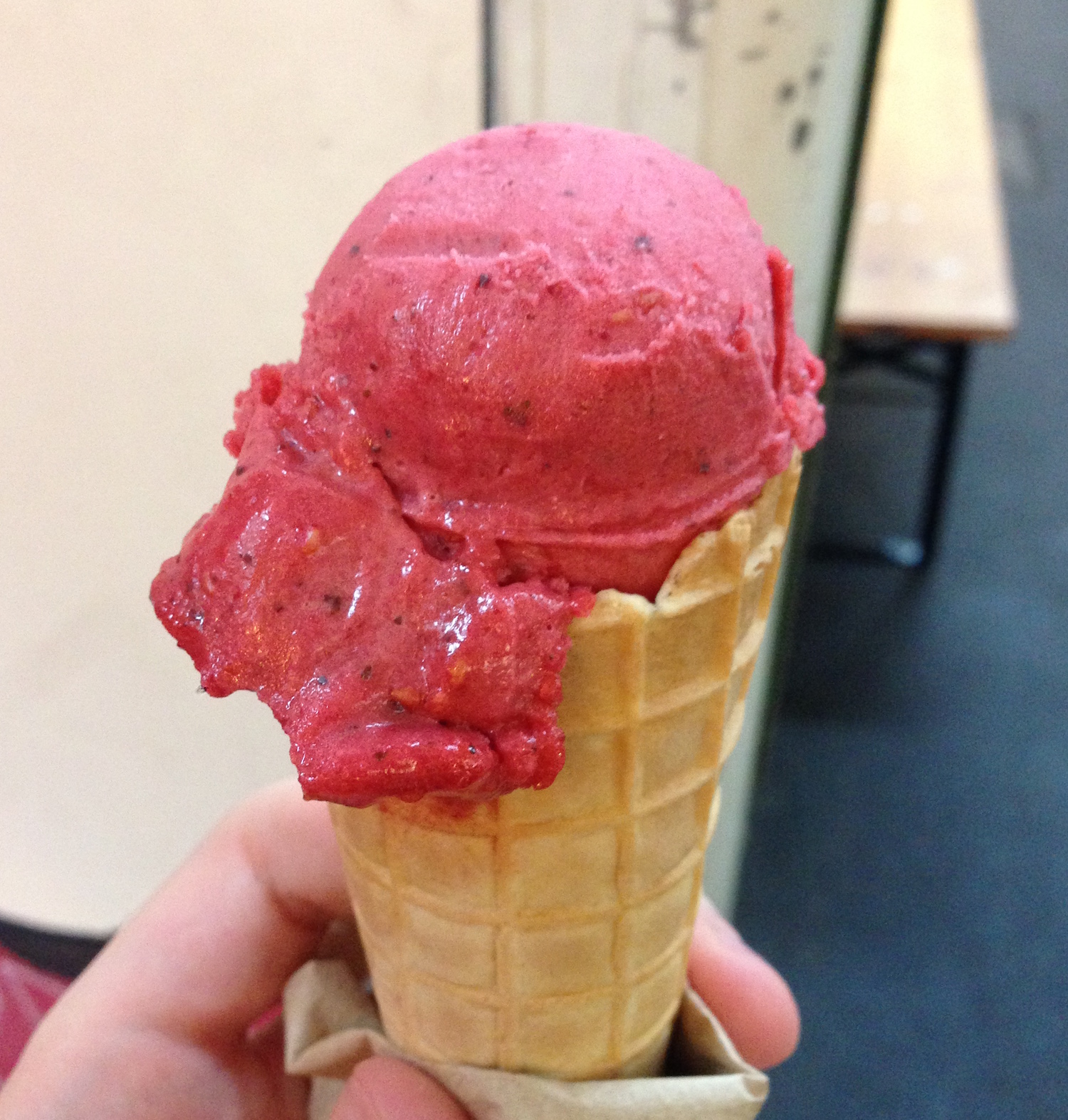 And there was a lady selling ice-lollies (or "popsicles"). 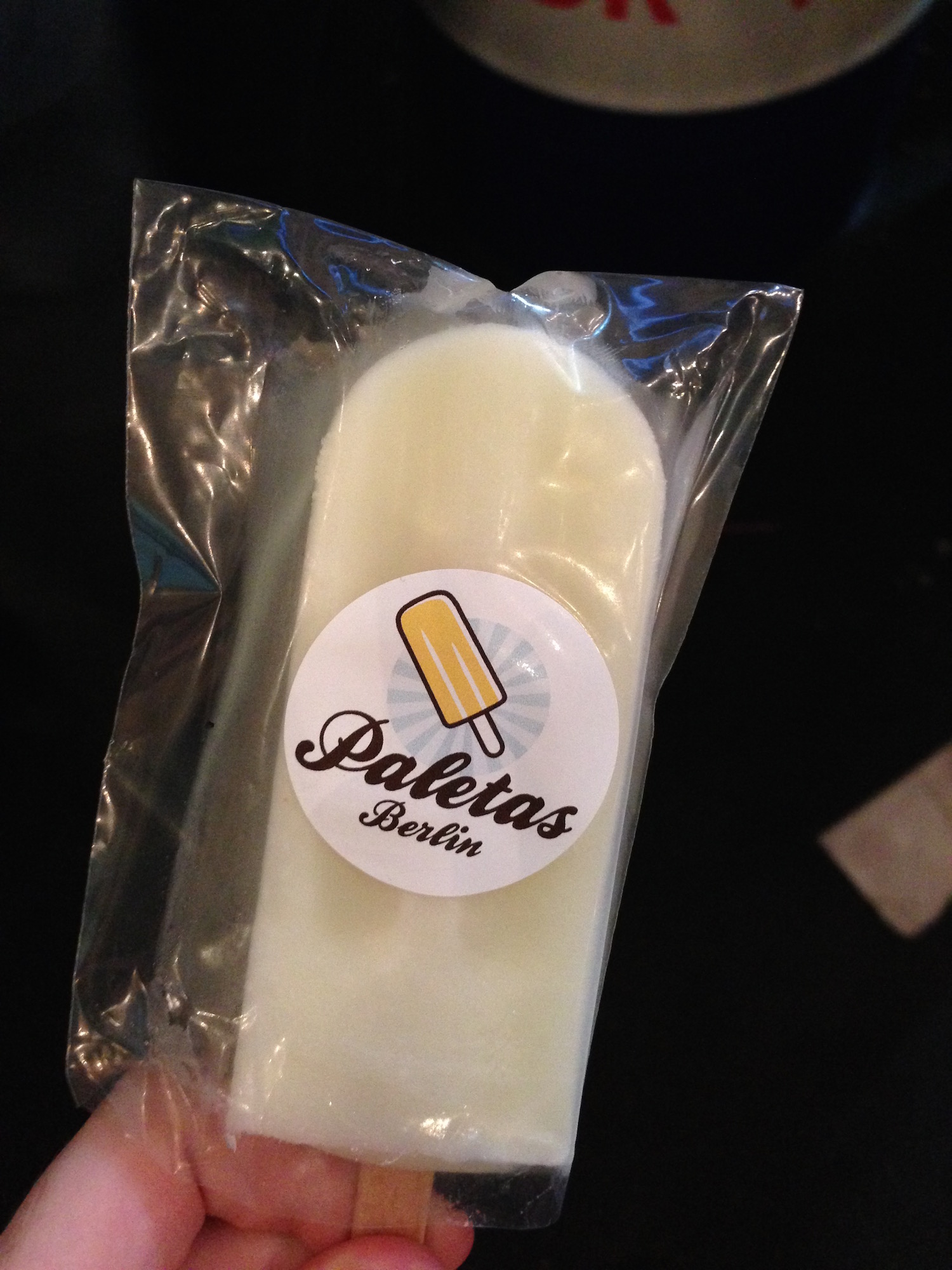 OK, that's all my Markthalle photos. We did eat some fancy food as well – at Sage. I really like the interior of this place. It's in a warehouse and has lots of industrial touches – like giant chains hanging from the ceiling. But it's also bright due to the large windows and white canvases on the walls.

We went for a four-course Chef's surprise menu. It was a great choice – full of interesting flavours and ingredients that I'd never come across before. Here's some pictures: 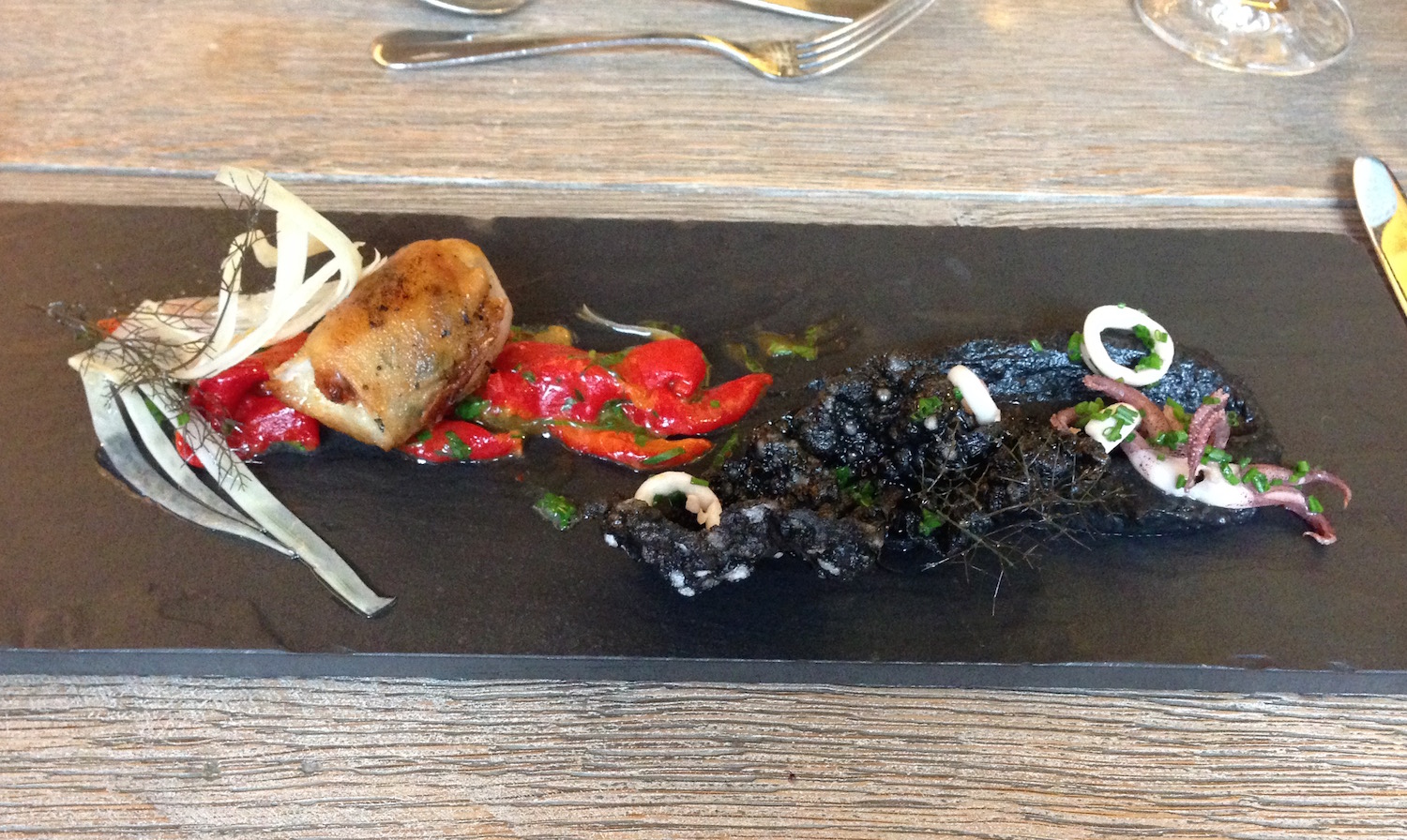 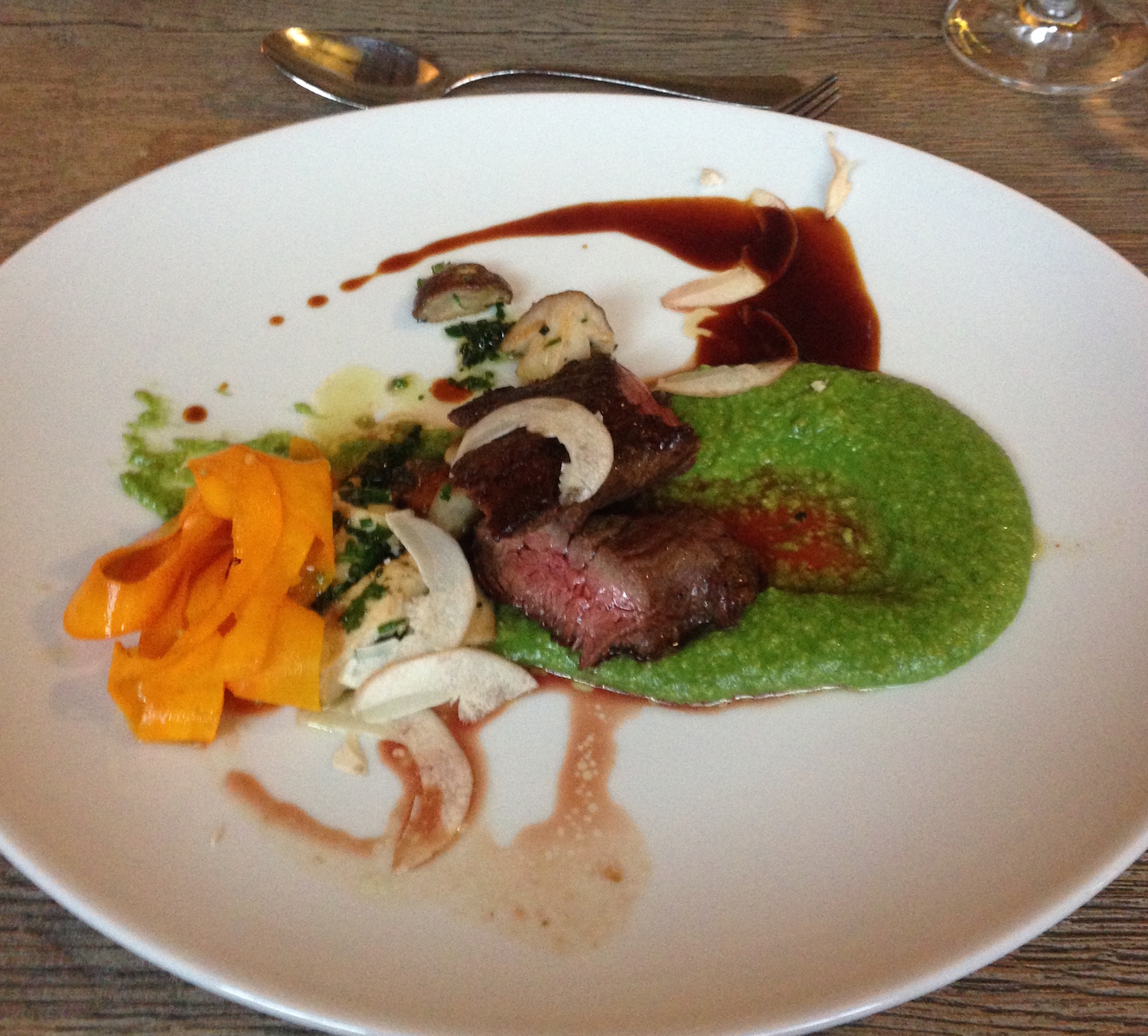 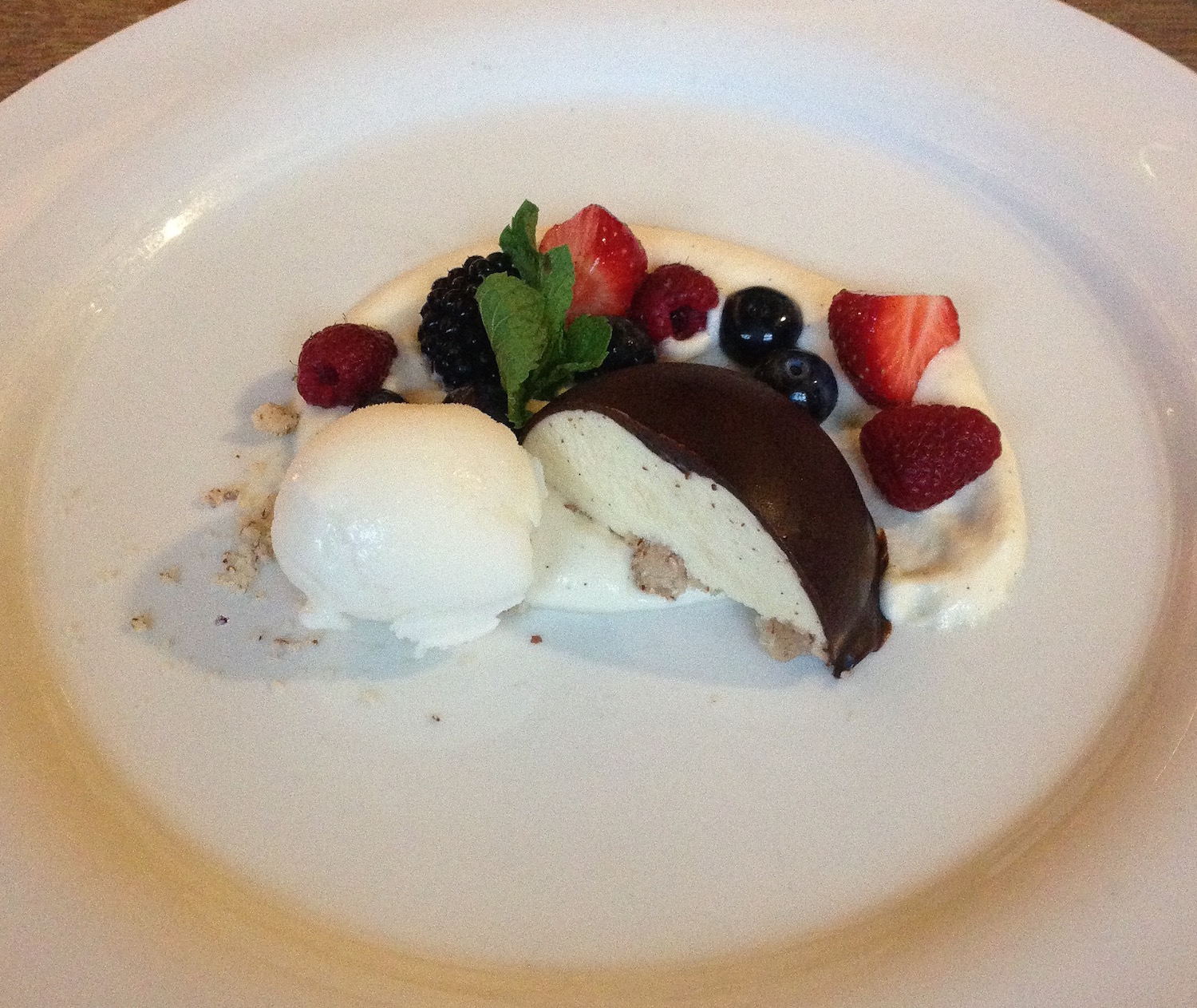 It was super-tasty and you should definitely go if you're in the area. Get an apéritif on the beach beforehand!

Our time in Berlin is almost over, and next we'll be heading off to Stockholm for HybridConf.