When Life Gives You Paekrosul: Making a North Korean Cocktail

We made it to Toronto! But more on that later. What's more important is drinking unusual alcohol. While in Toronto, we've been hanging out with two of our awesome friends, Mike and Melissa. Last year, they visited the DMZ, and bought a bottle of North Korean brandy known as Paekrosul. 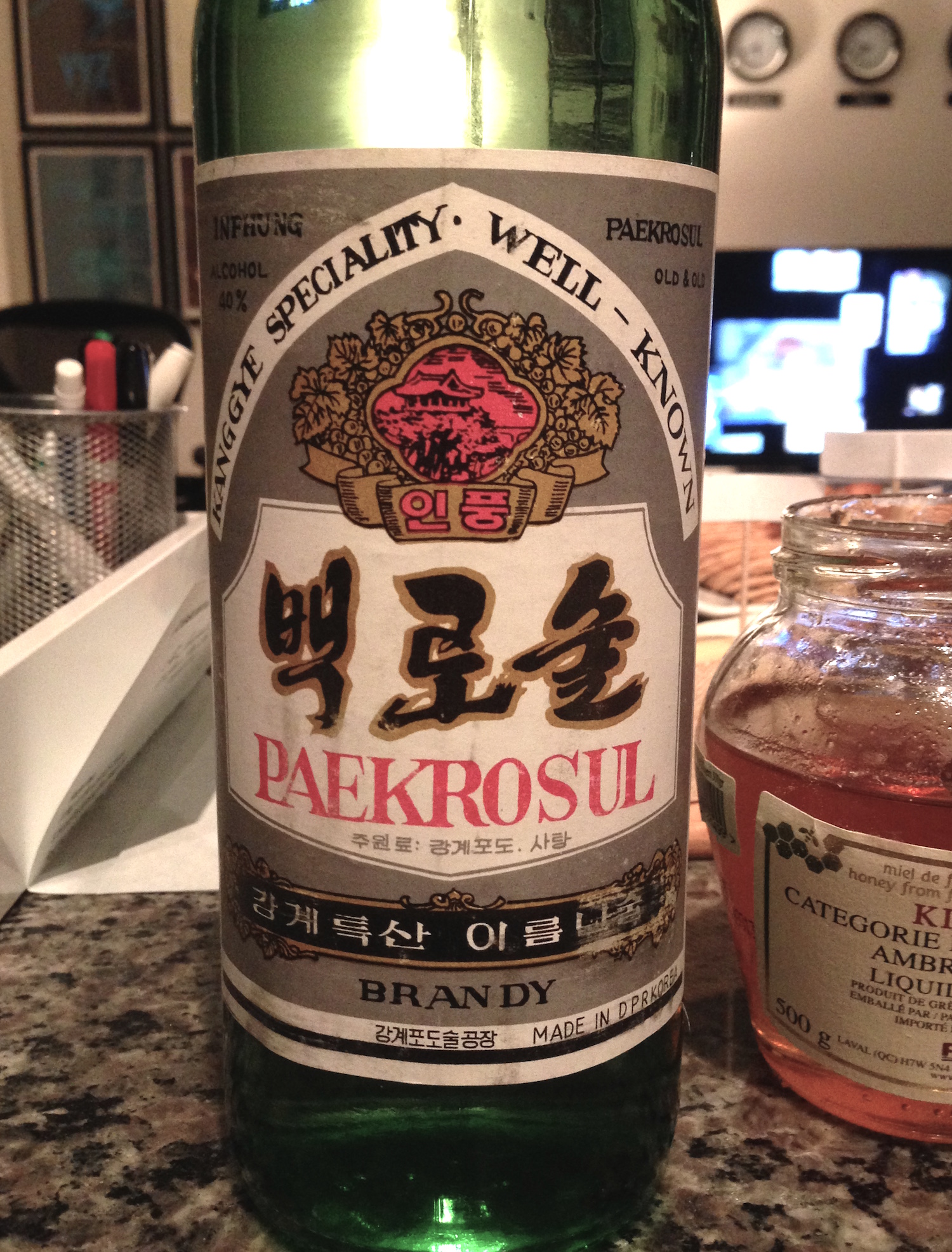 Apparently its name translates as "Hundred-Years Liquour", which is certainly promising. 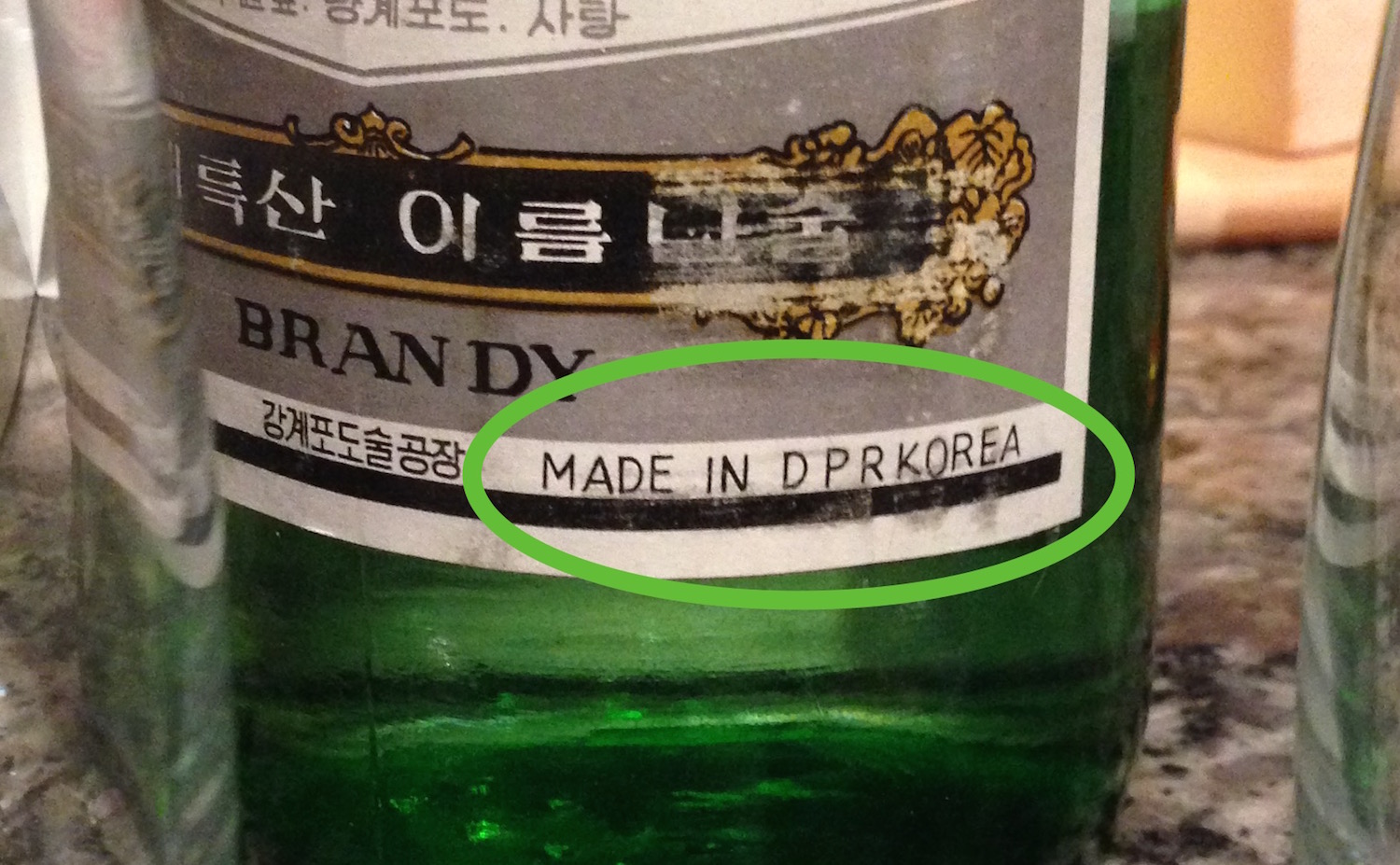 For realz made in DPR Korea

The bottle was a little tatty, and it was stoppered with a plastic cork. Inside, there was a bit of sandy sediment. Feeling the risk of going blind was one worth taking, we opened the bottle and poured ourselves a (small) glass. 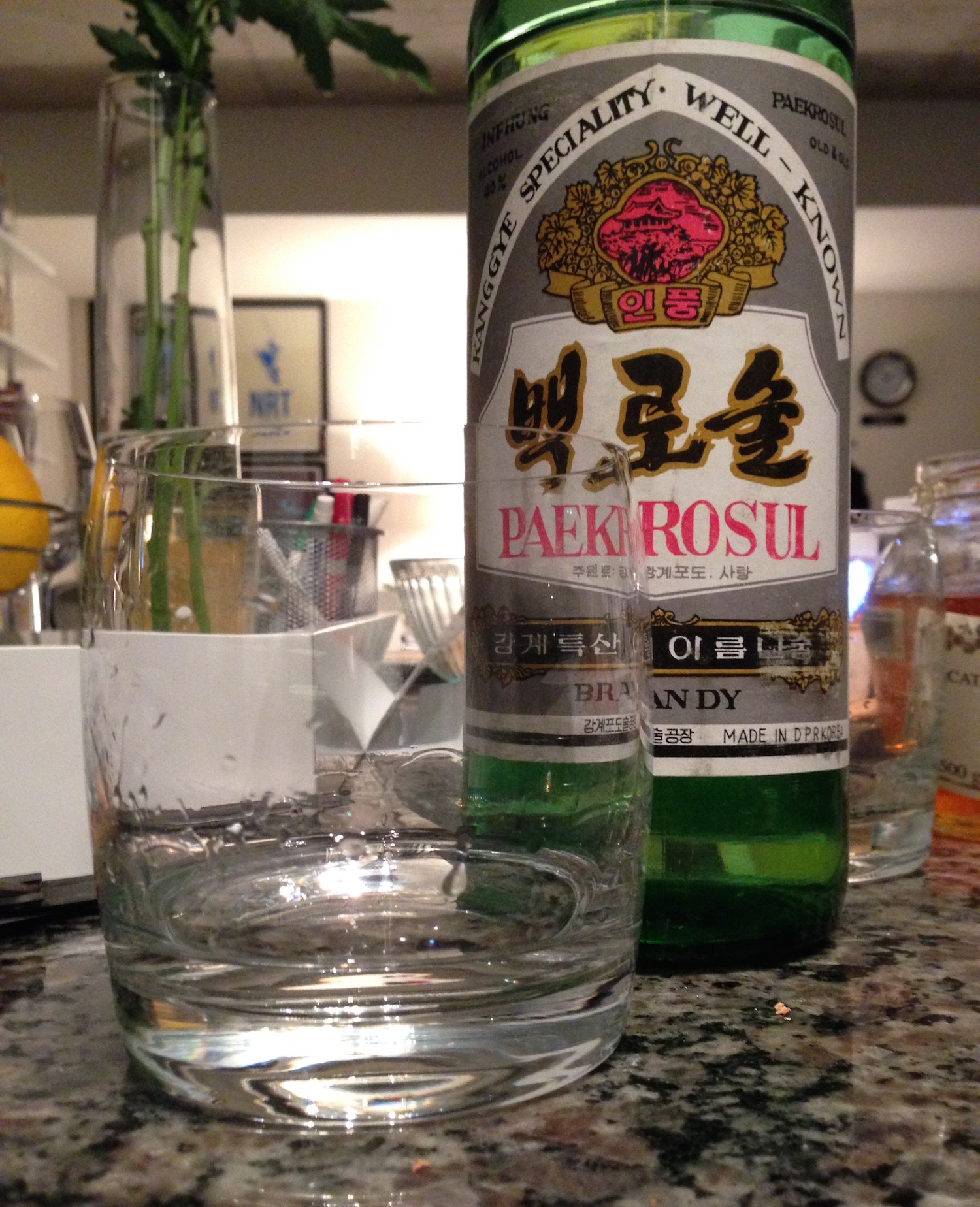 I thought it smelled a lot like baiju, a Chinese liquour that my Dad always gets as a business gift. Others described it as having more of a turpentine aroma.

Despite its nose-burning smell, it tasted fine. Harsh at first, it quickly becomes sweeter and it didn't have a burning aftertaste that you get with a lot of high-proof drinks. No one really wanted to drink much more than a sip, though. What do you do when you have alcohol that no one's going to drink neat? You make a cocktail of course! 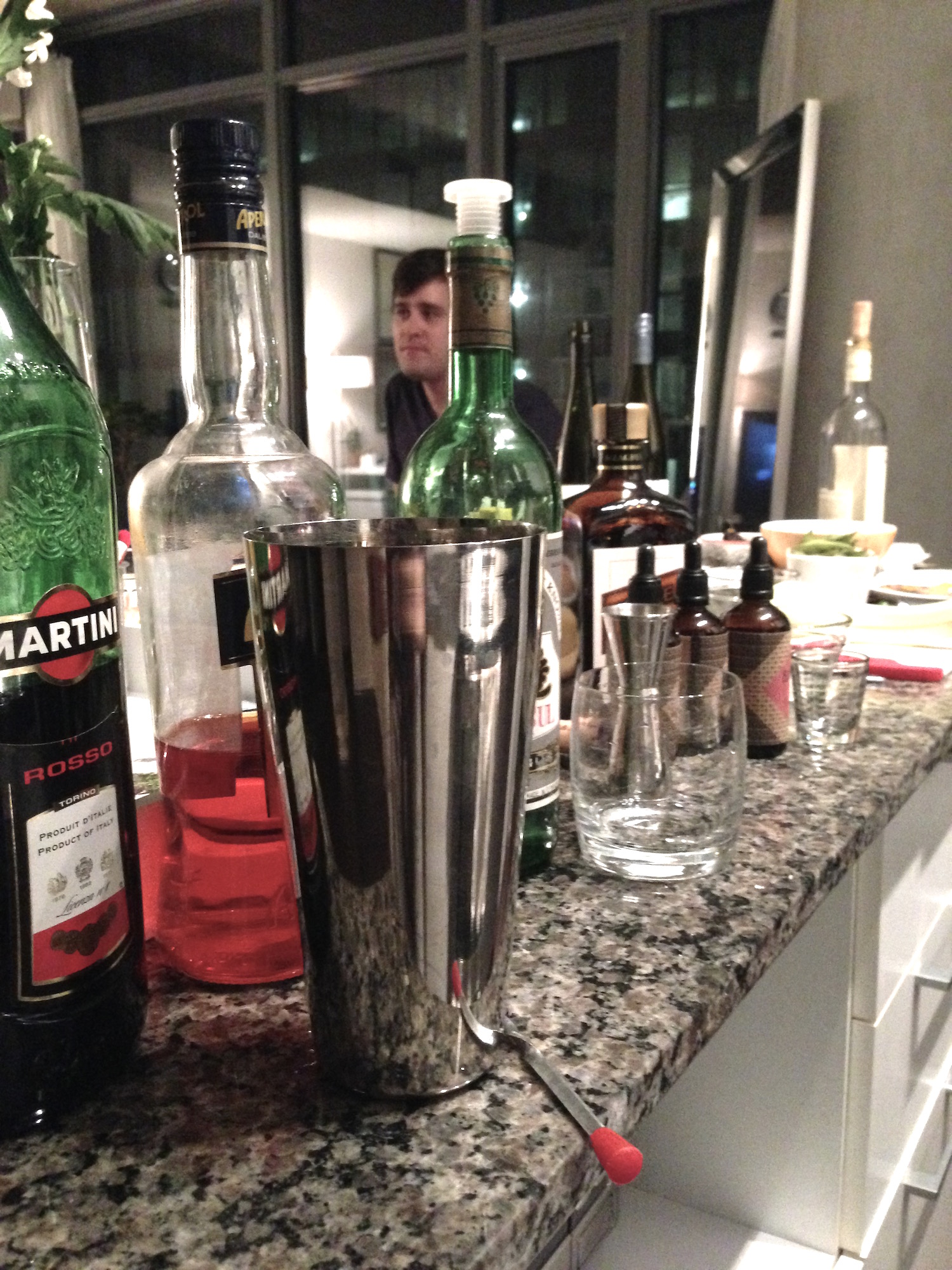 Time to make a cocktail

Mike and Melissa have a well-stocked bar, so I had a lot of stuff to work with. But where to begin? I looked online for some brandy cocktails to see if I could modify them. One suggestion was the metropolitan – like a manhattan but with brandy instead of whiskey. I used one part sweet vermouth to three parts Paekrosul, plus some Angostura for good measure. It didn't taste that great, though. As the Paekrosul was sweet already, the vermouth didn't contribute much. Plus the main off-putting thing about Paekrosul was the smell. Neither the vermouth nor the bitters covered that up. Time to try a different route.

My favourite cocktails are all citrus-based. Citrus fruits also tend to have pretty strong aromas, so I thought using lemon or lime might be good. 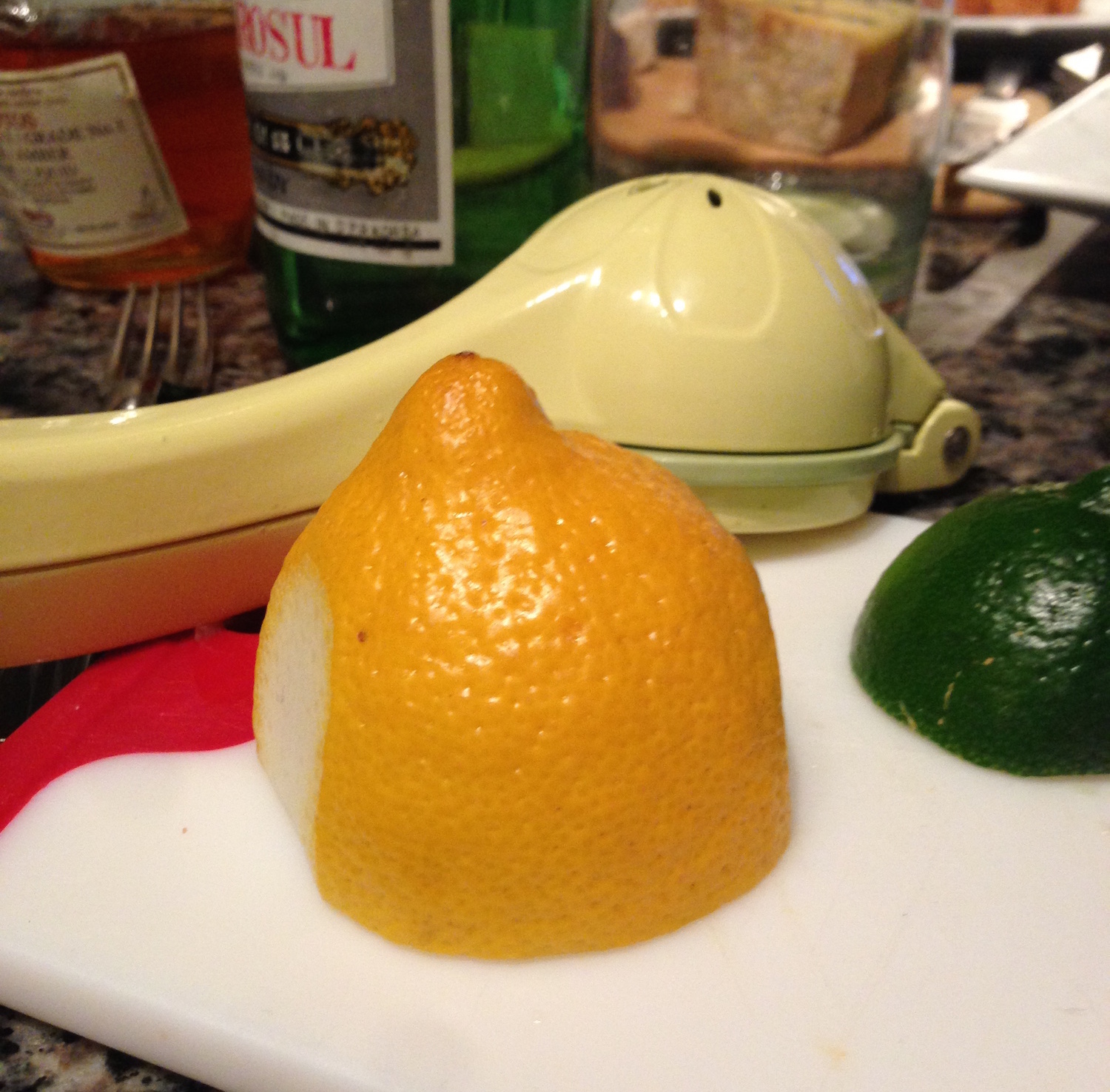 I mixed in some lemon juice and it tasted pretty good. It tasted even better if you used a lemon peel as a garnish. Twisting the peel to spray the citrus oil over the drink covered up the turpentine smell pretty well.

I tried it with lime but it didn't work as well – the lime flavour wasn't strong enough.

I also ended up adding some Cointreau triple sec to the mix to add a little more citrus and sweetness.

Ta-da! It wasn't the best cocktail I've ever made, but I think I did a good job of mostly masking the worst flavours of the Paekrosul while keeping its more distinctive flavours. I'm pretty sure by next summer it will be on every speakeasy menu from Brooklyn to the Mission.

I haven't come up with a witty name yet, so suggestions are welcome. 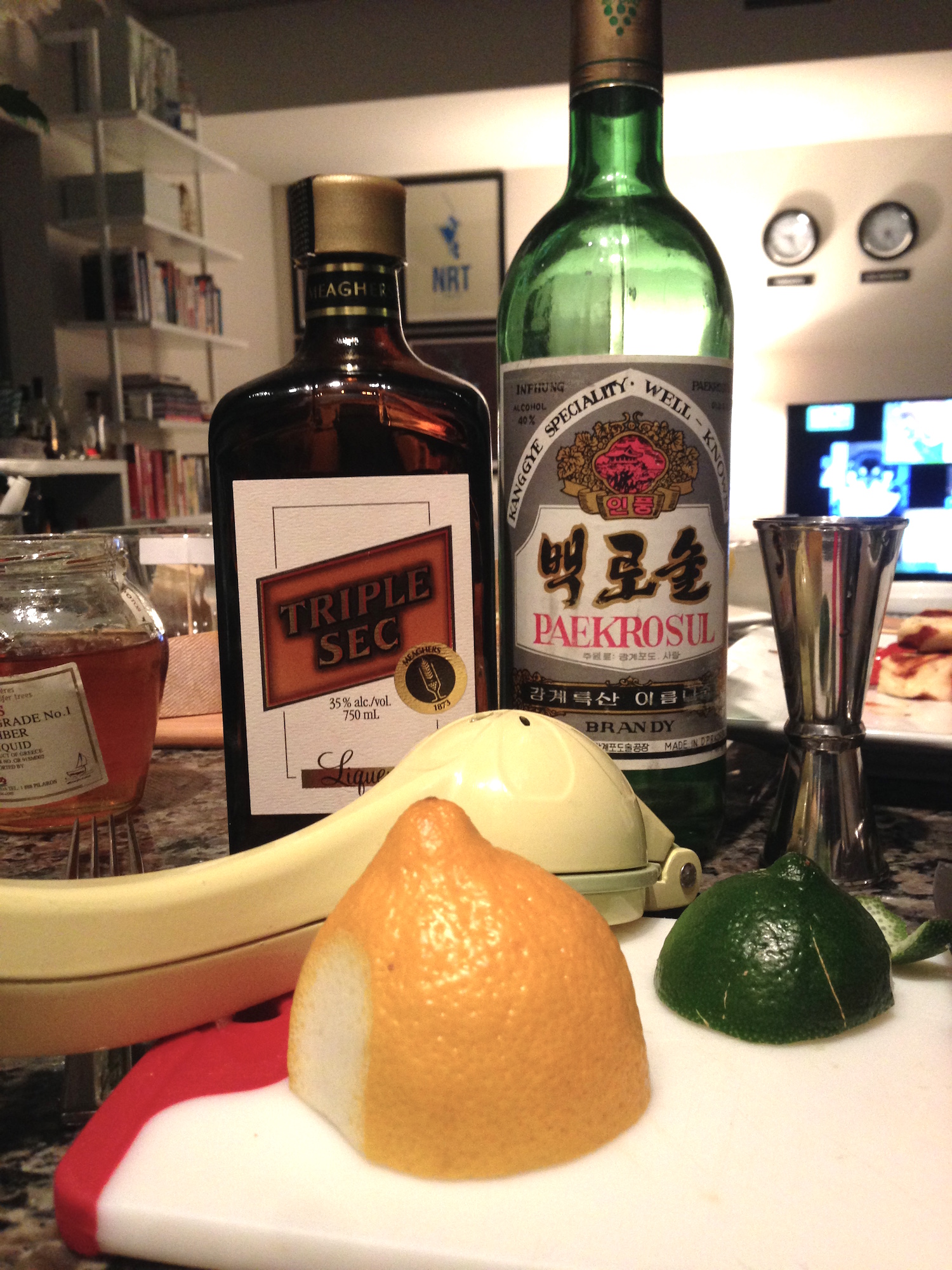 If you have some Paekrosul , is as follows: