Flying to Toronto, I saw the Niagara Falls as a misty interruption of the Niagara River. Turns out they're only about a 1.5hr drive from Toronto, so we decided to head there for an overnight trip. Extra bonus: to get there you travel through Ontario wine country, so we stopped off at a winery on the way back.

Niagara Falls (the town) is very... commercial. It's almost like a damp Las Vegas. The Canada side (with the better views) has a bunch of casinos, super-tall hotels, chain restaurants. It's a little overwhelming, especially if you imagined it would just be a beautiful waterfall surrounded by nature.

We stayed at the Hilton, which had pretty neat views of the American Falls. 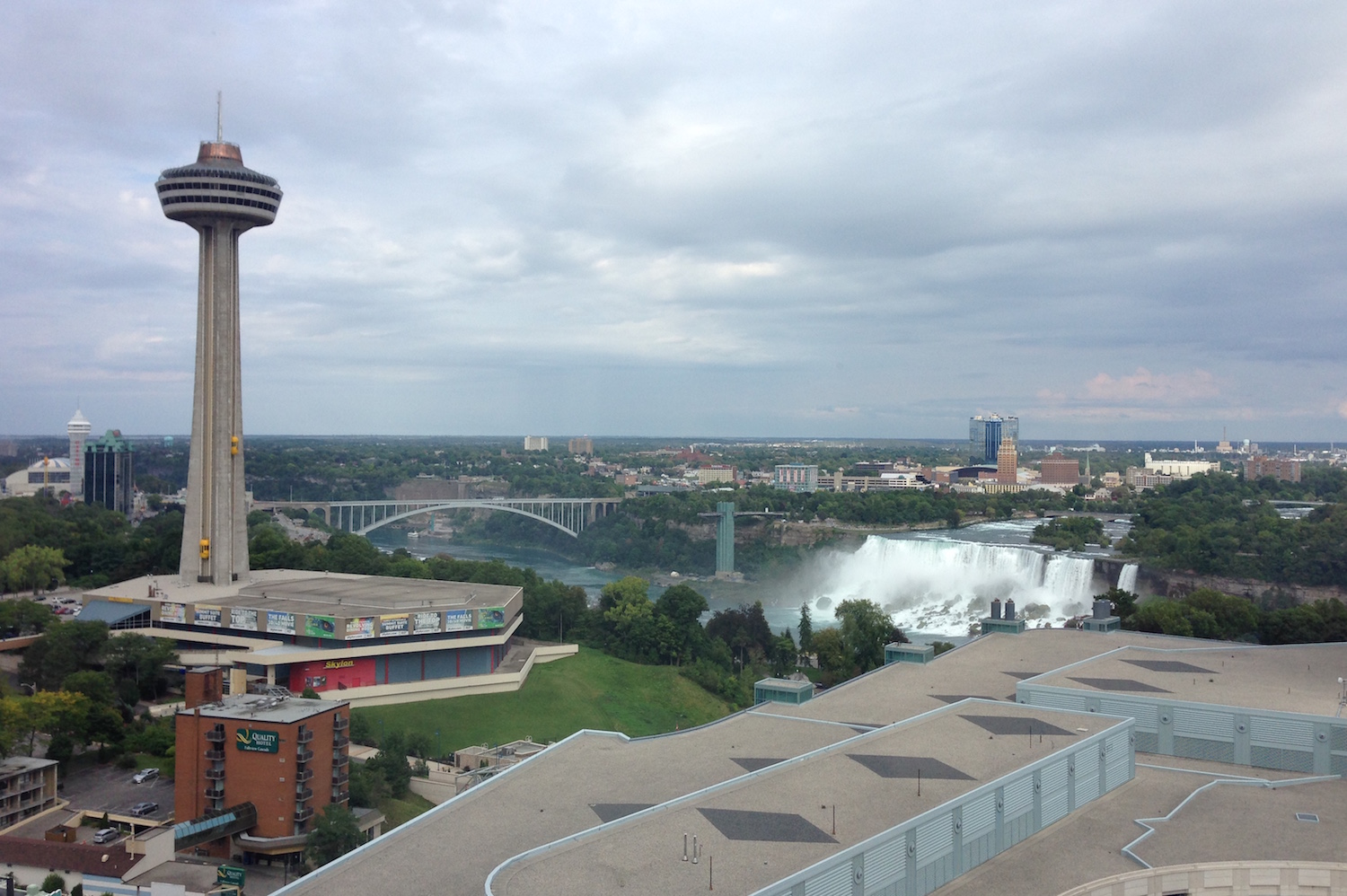 View from our room. That's the U.S.A. across that bridge!

We arrived at 6pm, and headed straight for the Hornblower. It's the Canadian version of the Maid of the Mist boat.

Panorama on the Hornblower

You take a route up the river, past the American Falls and Bridal Veil Falls.

After that, the boat goes right into the mist spray of the Horseshoe Falls. Pro-tip: if you have contact lenses, wear them. I was running out of dry bits of T-shirt to wipe my glasses with. 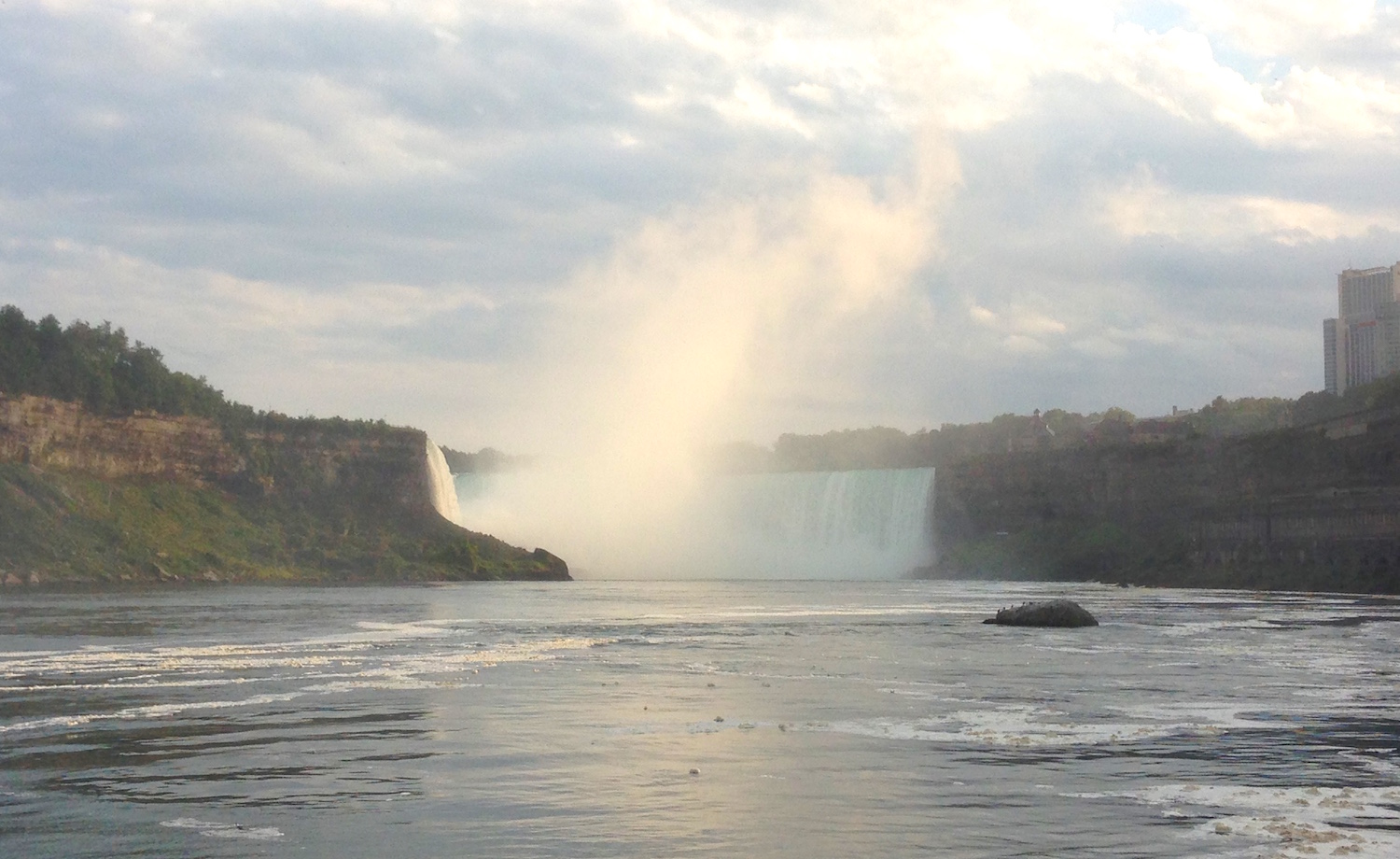 This next photo adequately captures what it feels like in the middle: it's windy and there's mist everywhere and it's loud. 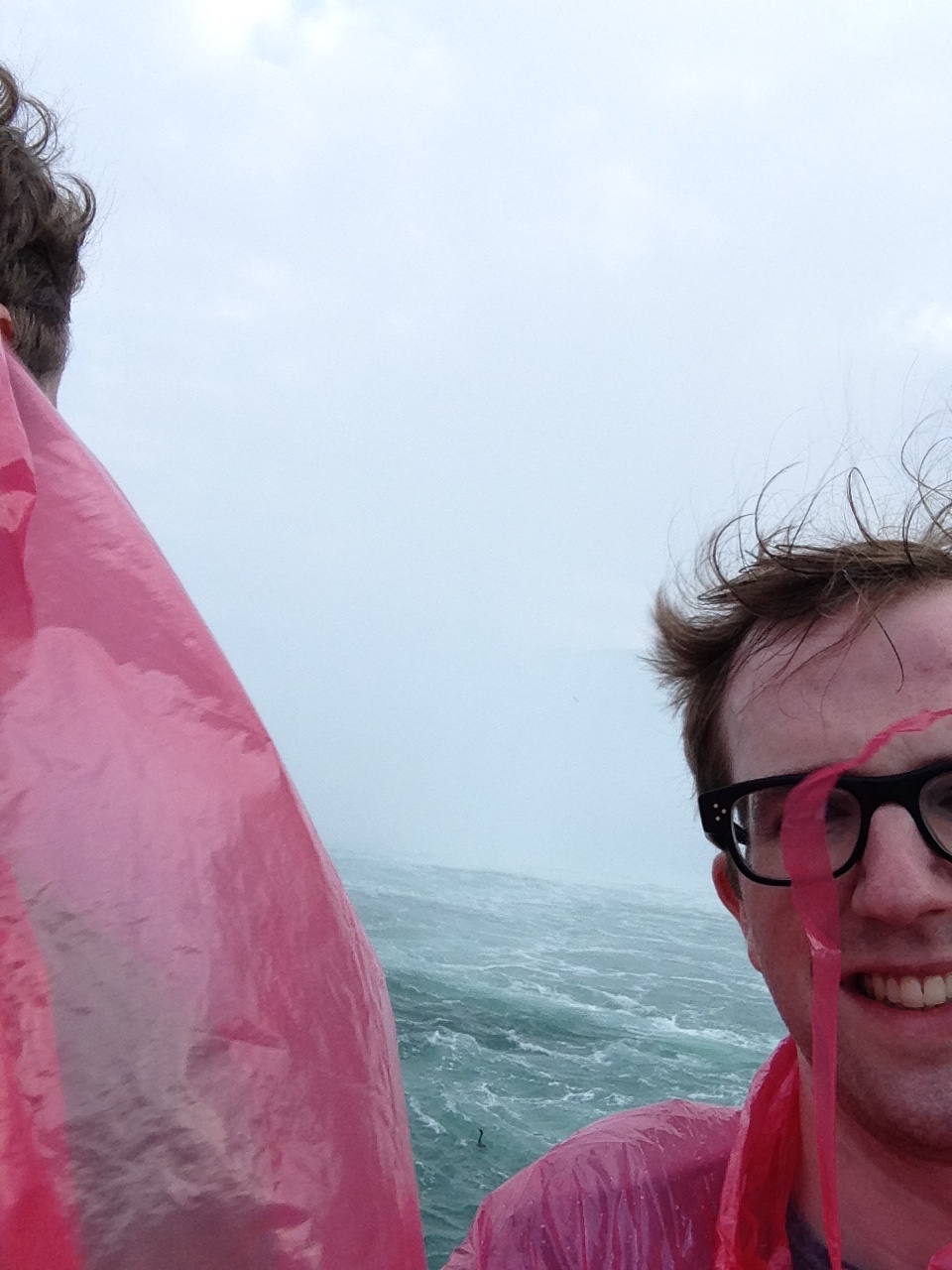 In the middle of the falls 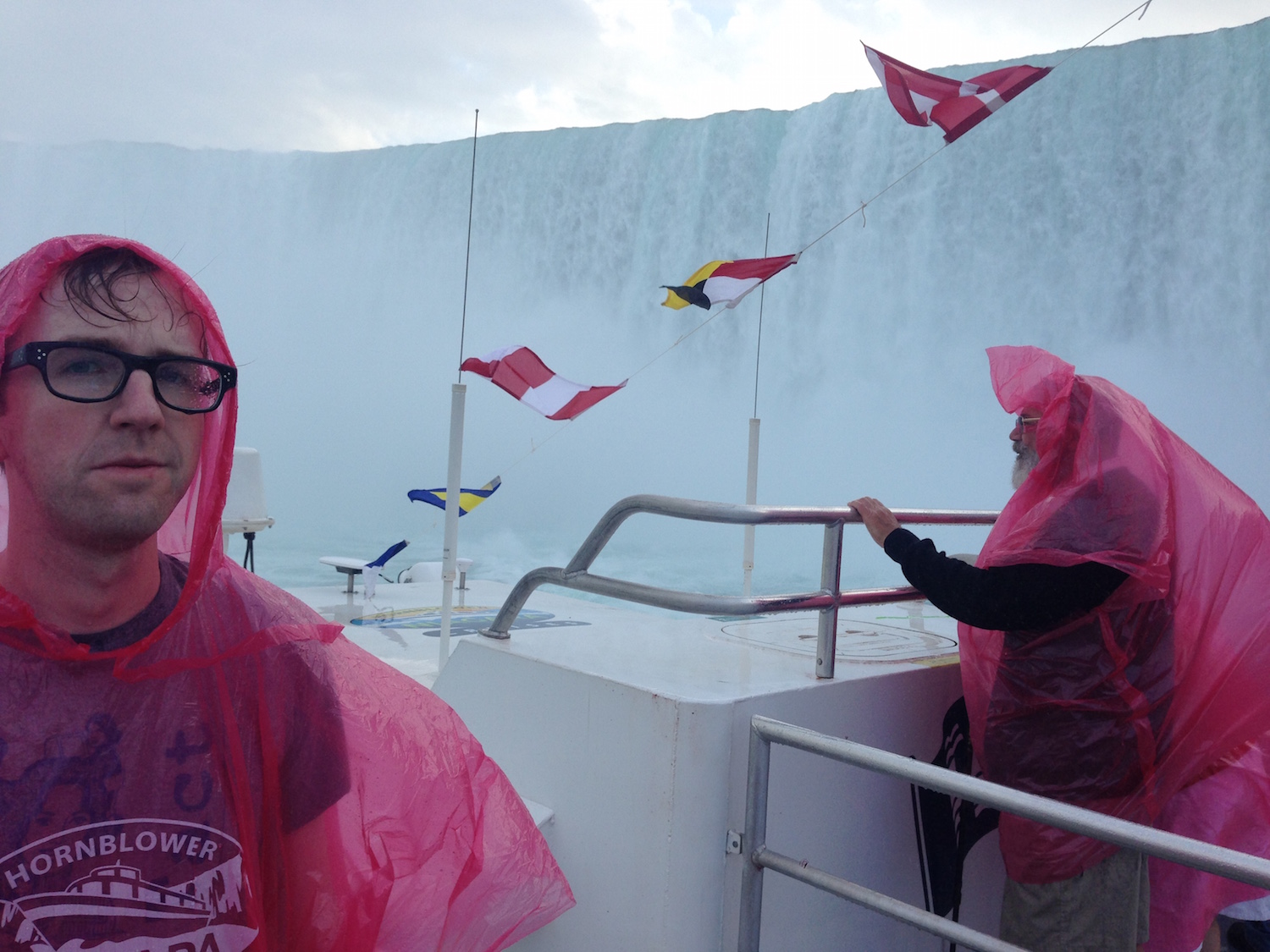 After we got off the boat (thankfully it was pretty warm, so we dried quickly), we headed to our evening meal at Weinkeller. But on the way, we passed a haunted house: Dracula's Haunted Castle on Clifton Hill. We like that sort of thing, so went inside. It was $10 each, and you can choose your scare level – we chose medium.

We were the only ones in there, and after paying headed up some stairs in pitch-black darkness. The first few rooms are dull – mostly poorly-done wa figures. However, towards the latter half the scare actor(s?) come in. He was amazing – he growled and chased us through the maze. It was pretty terrifying, I have to admit. I've never been more relieved than seeing those stairs leading to the exit.

Anyway, we continued up Clifton Hill to the restaurant. Turns out haunted houses are a big deal in Niagara Falls. We counted three more on the walk. There was one next door/above Weinkeller, too! 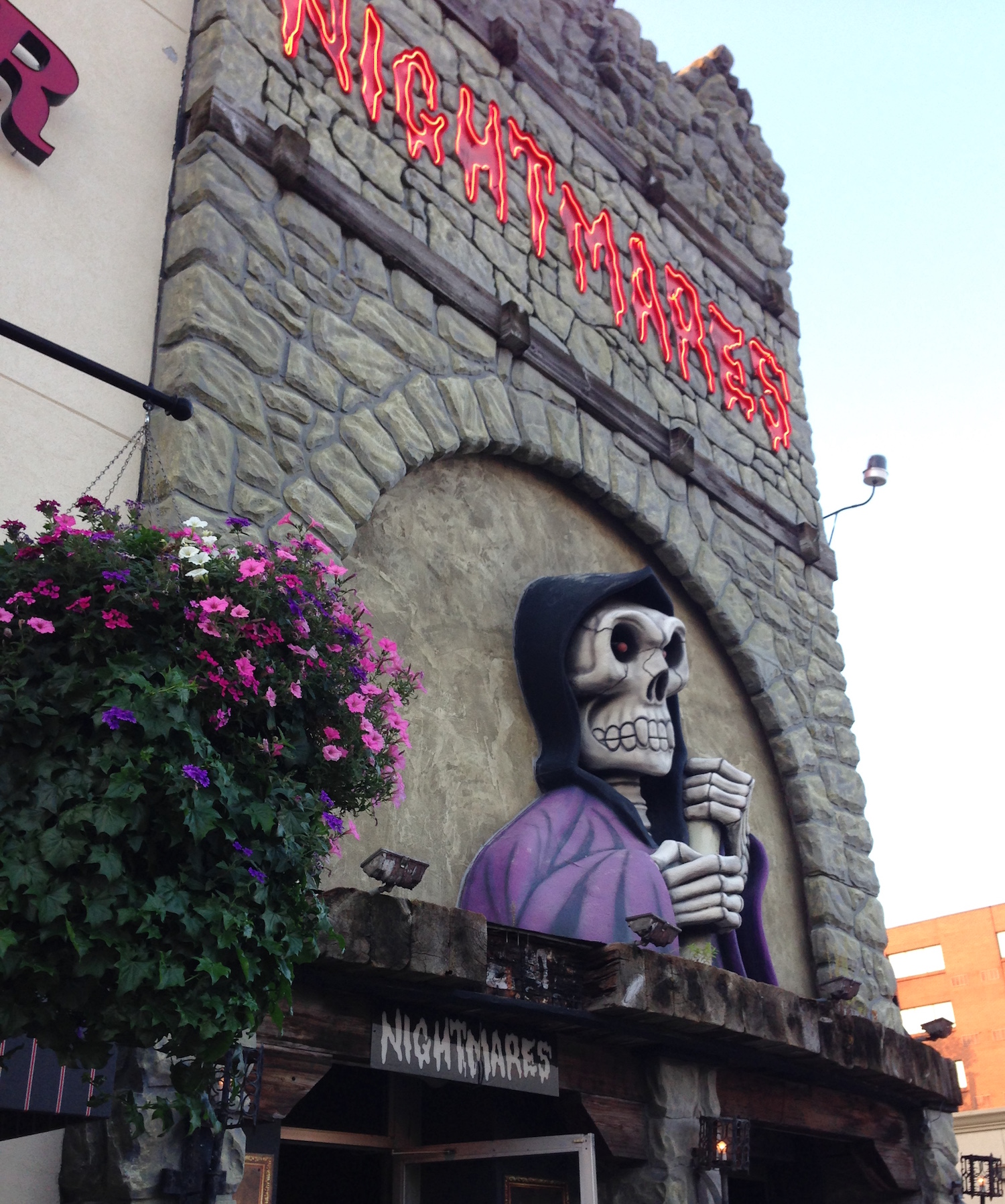 Next door to Weinkeller

Weinkeller is the top-rated TripAdvisor restaurant for Niagara Falls. If you use TripAdvisor, I probably don't need to describe the atmosphere – keen service, slightly older clientele, great value, and delicious food. It amuses Hampton and me to compare ratings on TripAdvisor, Yelp, and FourSquare. Each site's audience has subtley different things they look for in a restaurant.

I think the restaurant space used to be a cheap Italian restaurant. The decor was a little... lacking. Who puts colour-changing lights in a restaurant? But the wait staff were incredible – making jokes, smiling all the time. One of the menu options is a five-course meal but (get this) you can replace up to two of the courses with a glass of wine. Perfect!

Speaking of wine, they make their own. You can see the casks in the back. It was really quite good. The food was amazing. I had some incredible steak tartare, and my main was a super-juicy pork chop. Hampton had a great seared-tuna thing. 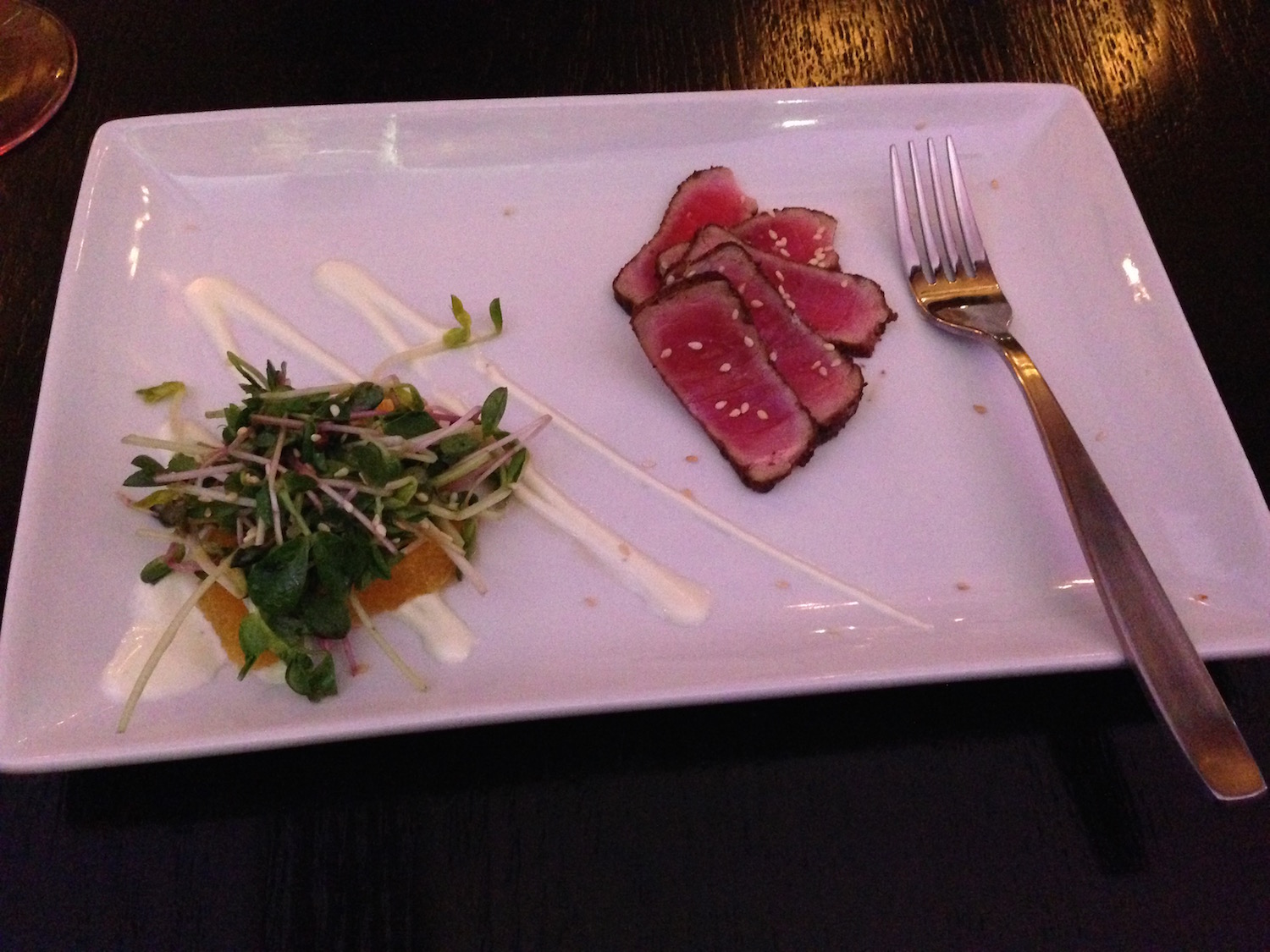 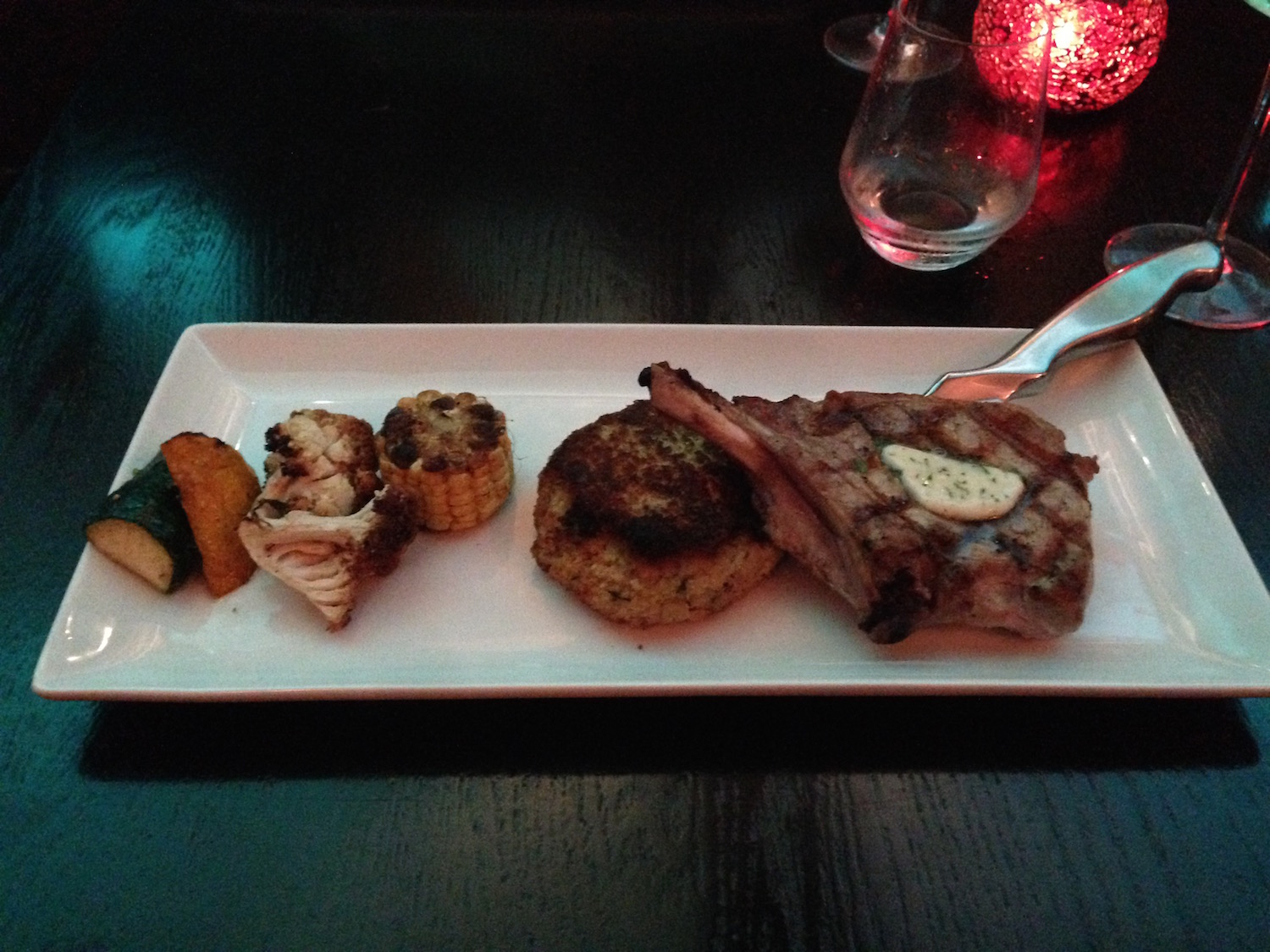 After the meal, we walked back to our hotel and grabbed a drink at Myst, the top-floor bar. The drinks were OK. The view was good – but at night Niagara Falls isn't nearly as impressive. They light the falls with a dim rainbow of colours. Super-tacky. You can't really get a good photo, so you'll have to imagine it.

The next morning we did the other Niagara Falls tourist trap: going behind the Horseshoe Falls. Walking close to the edge of the falls was pretty spectacular. The water is much clearer than I thought it was going to be. 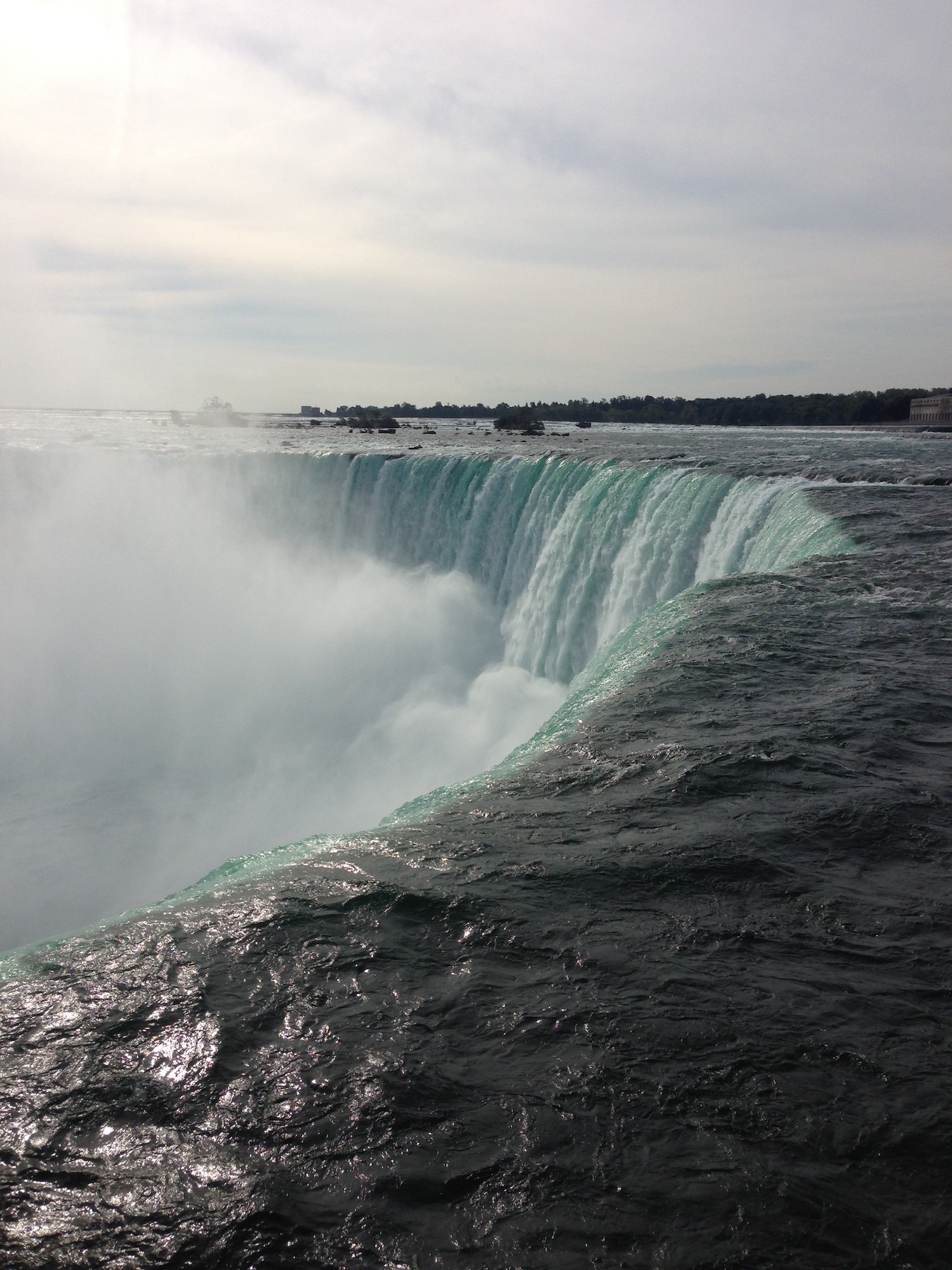 The edge of Horseshoe Falls

You take a lift down to the bottom of the falls, and it opens up into these dank tunnels. 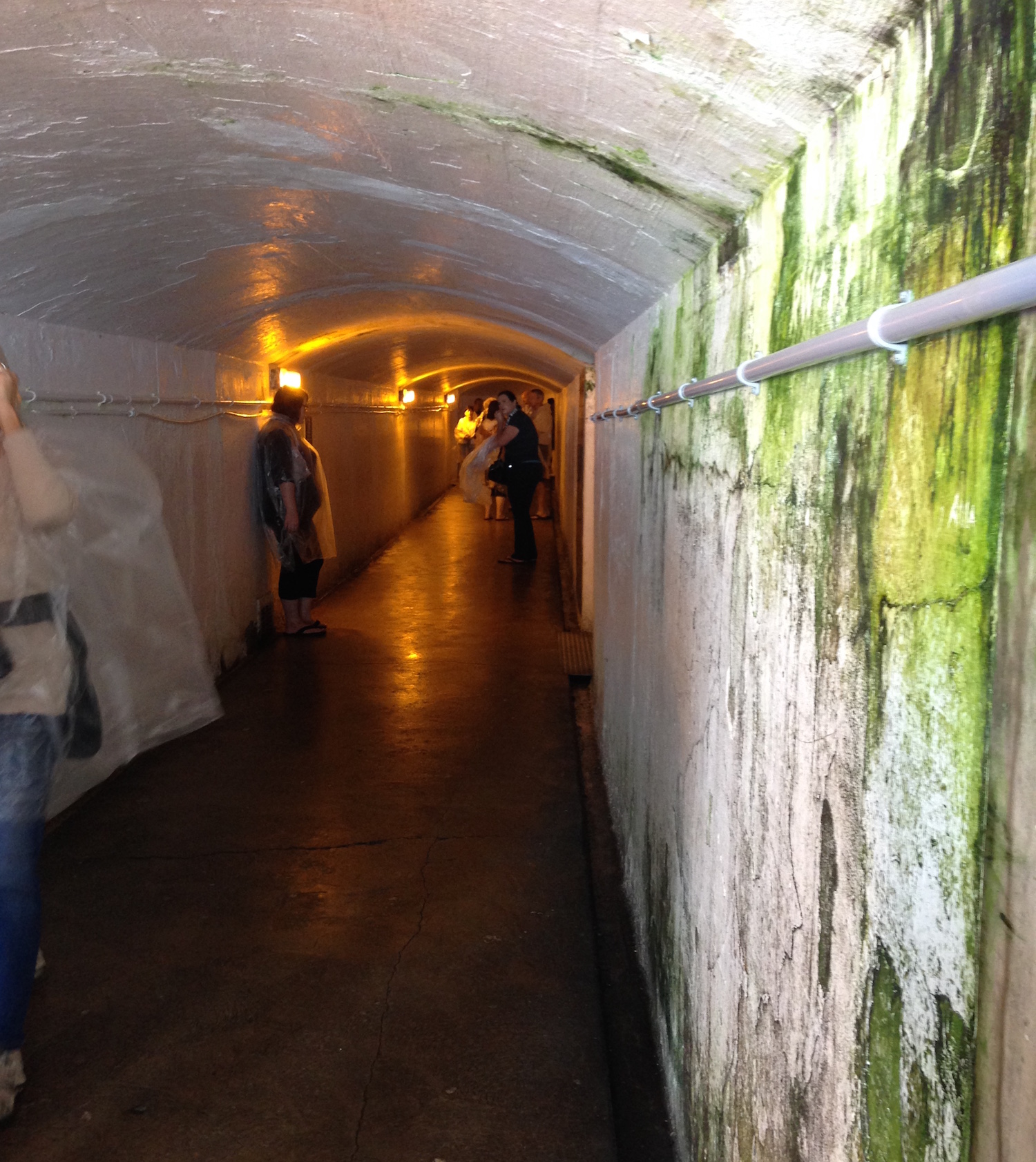 You can go outside to just where the falls hit the water, which is extremely loud and incredibly close.

Where Horseshoe Falls meets the river

I was always fascinated by waterfall geography (I was a cool kid). It's so strange to think that Niagara Falls started way downstream and has been slowly moving since then.

You walk down some more tunnels to get behind the actual falls. They have a couple of holes cut in the rock and you can look out. But you can't see much – it's mostly a white mist. It's really loud, too. 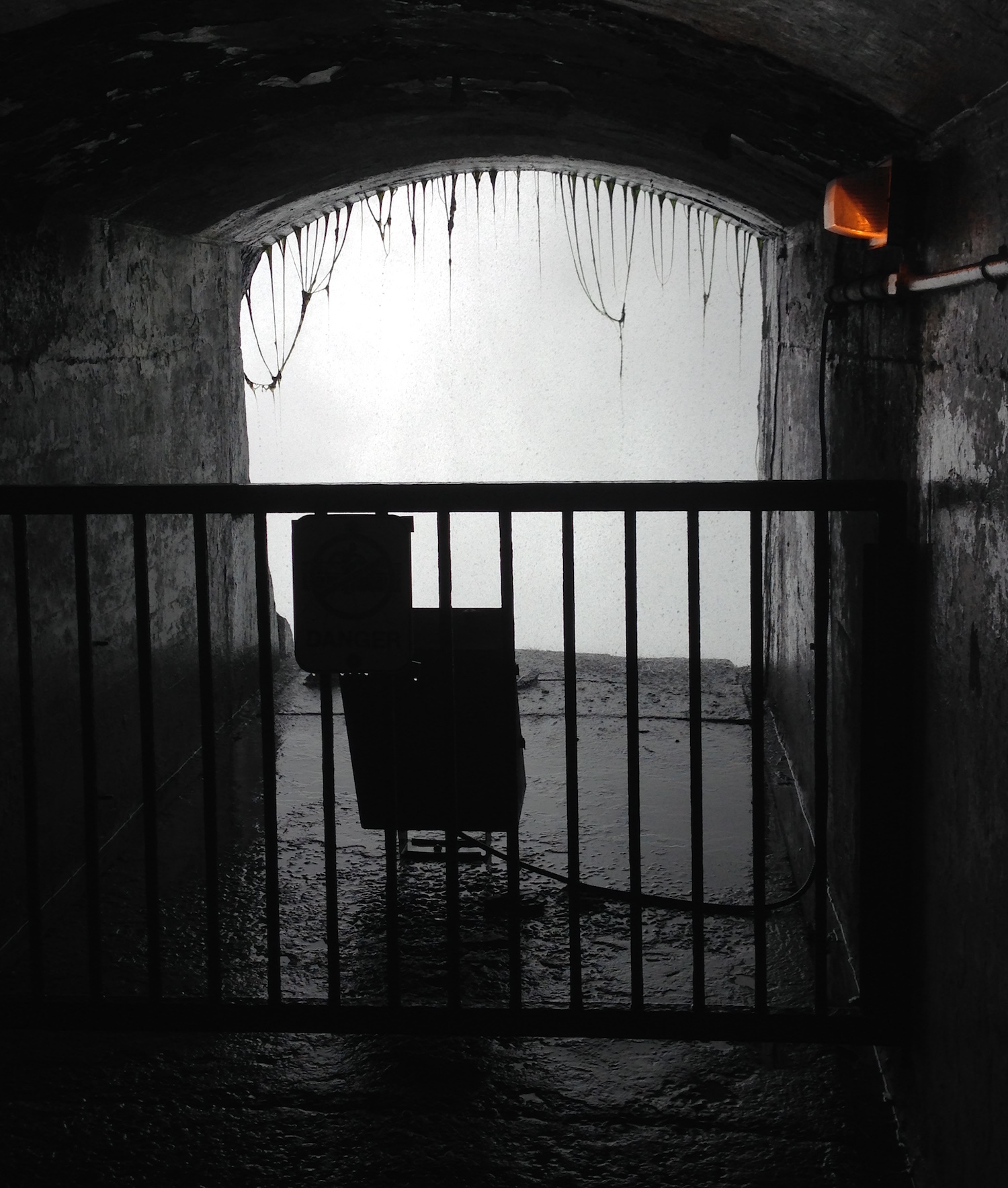 After that, we left Niagara Falls. It was fun going there, but I'm not sure I'd do it again any time soon. A day there was enough to see and do most things, I think.

The drive back to Toronto goes through wine country, so we stopped off at one of Hampton's favourite wineries: Fielding Estate. 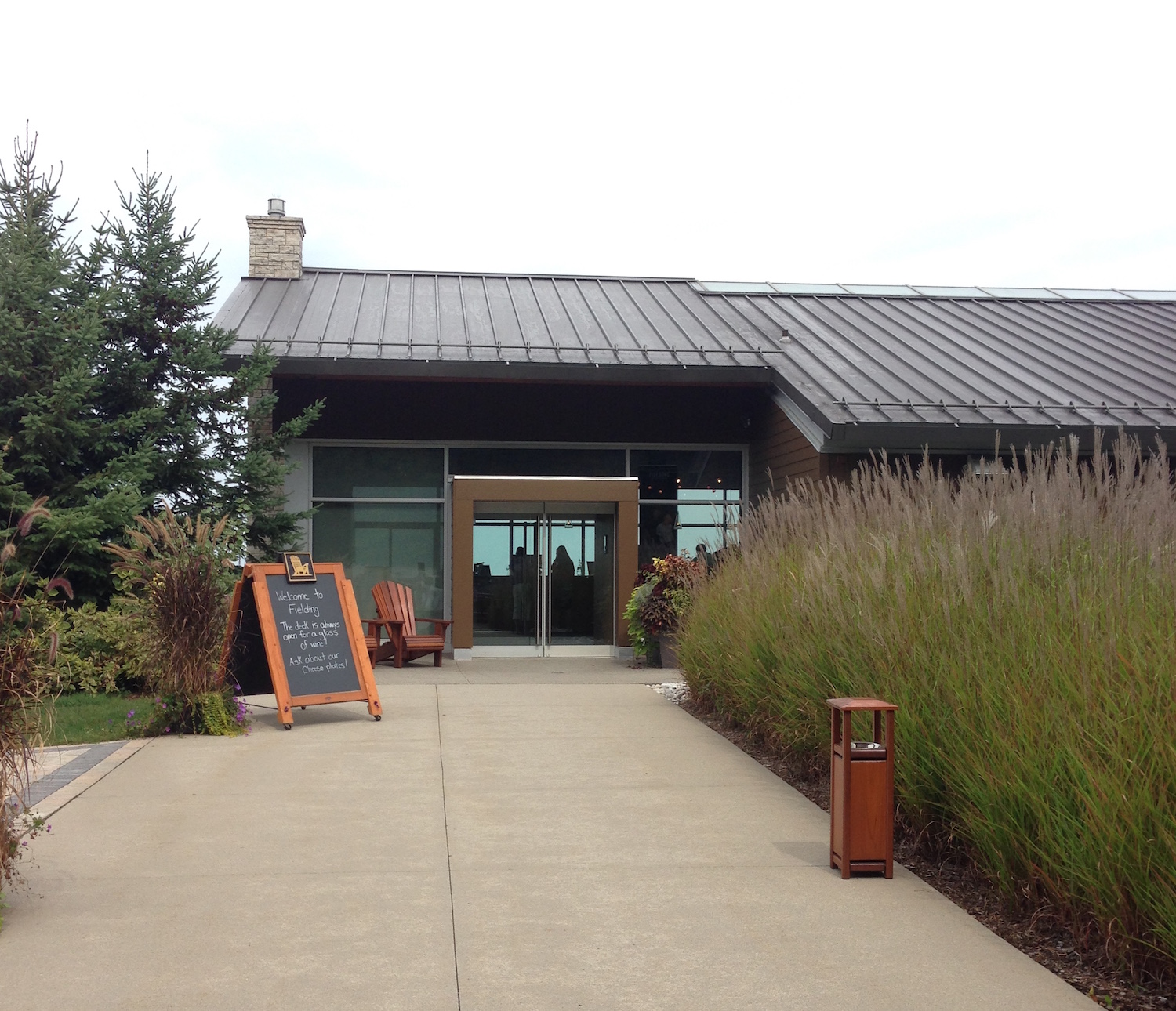 Californian wines aren't really our thing. It's nice going to Napa or Sonoma and doing a wine tour, but we prefer whites grown in colder regions. We like whites from the Alsace, Austria, Ontario or Washington. Fielding Estate Winery has some great wines – aromatic and floral, but not too sweet. 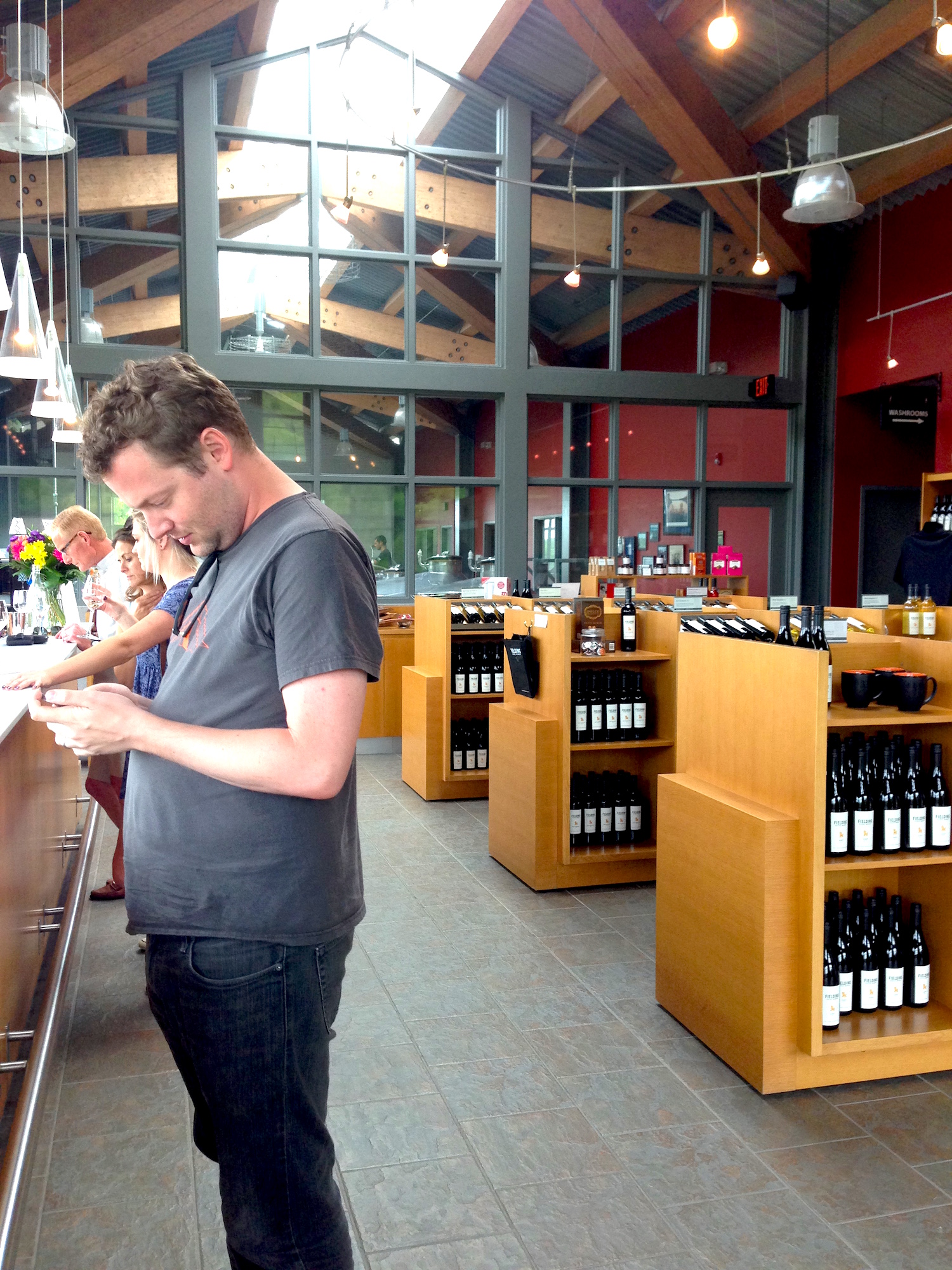 We tried about six wines in total, and bought four bottles. The gewurztraminer, the viogner, and the Rock Pile Pinot Gris were the best. 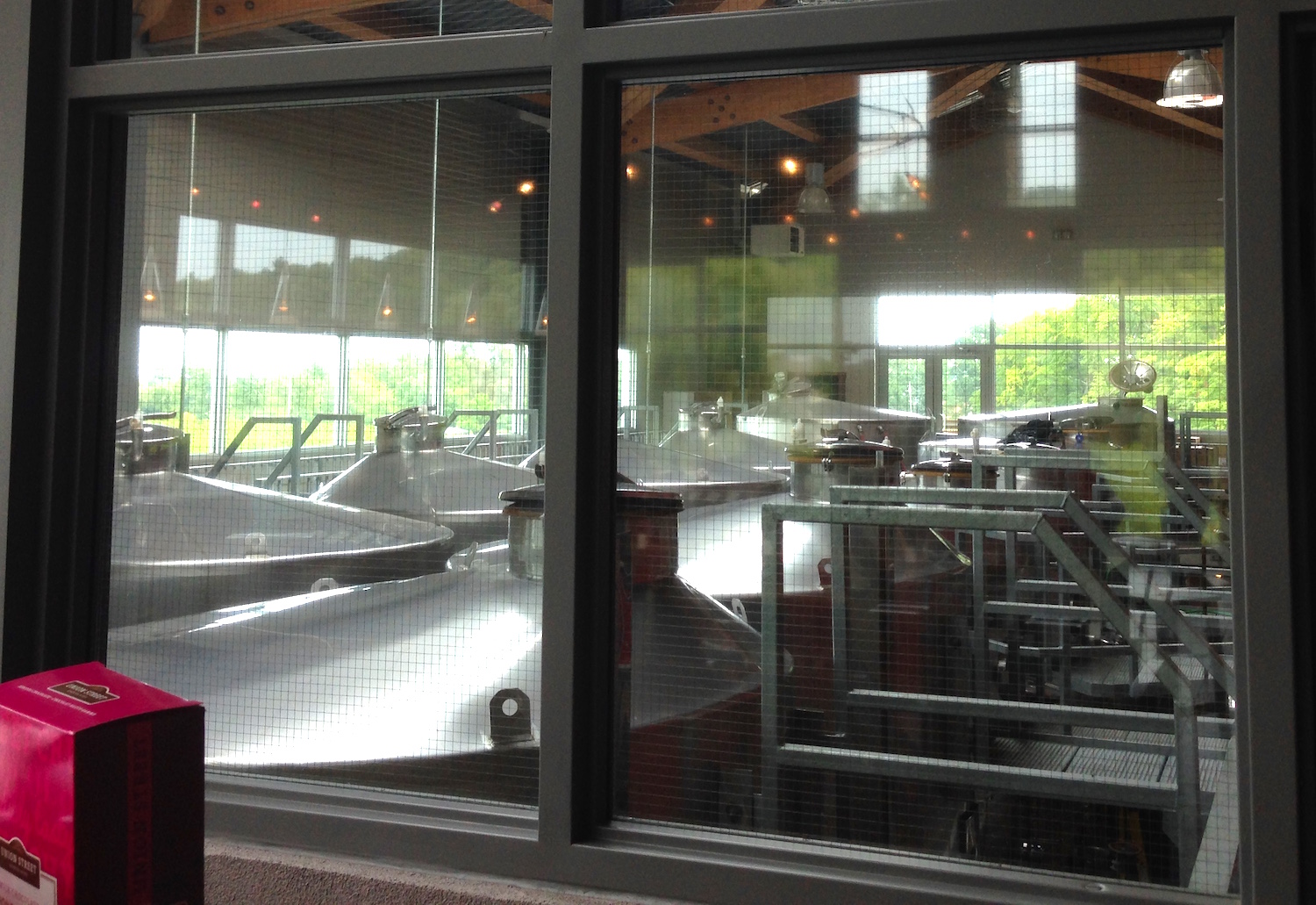 There's an awesome view over the vineyards, too. If we had more time, we would have definitely had a glass outside. 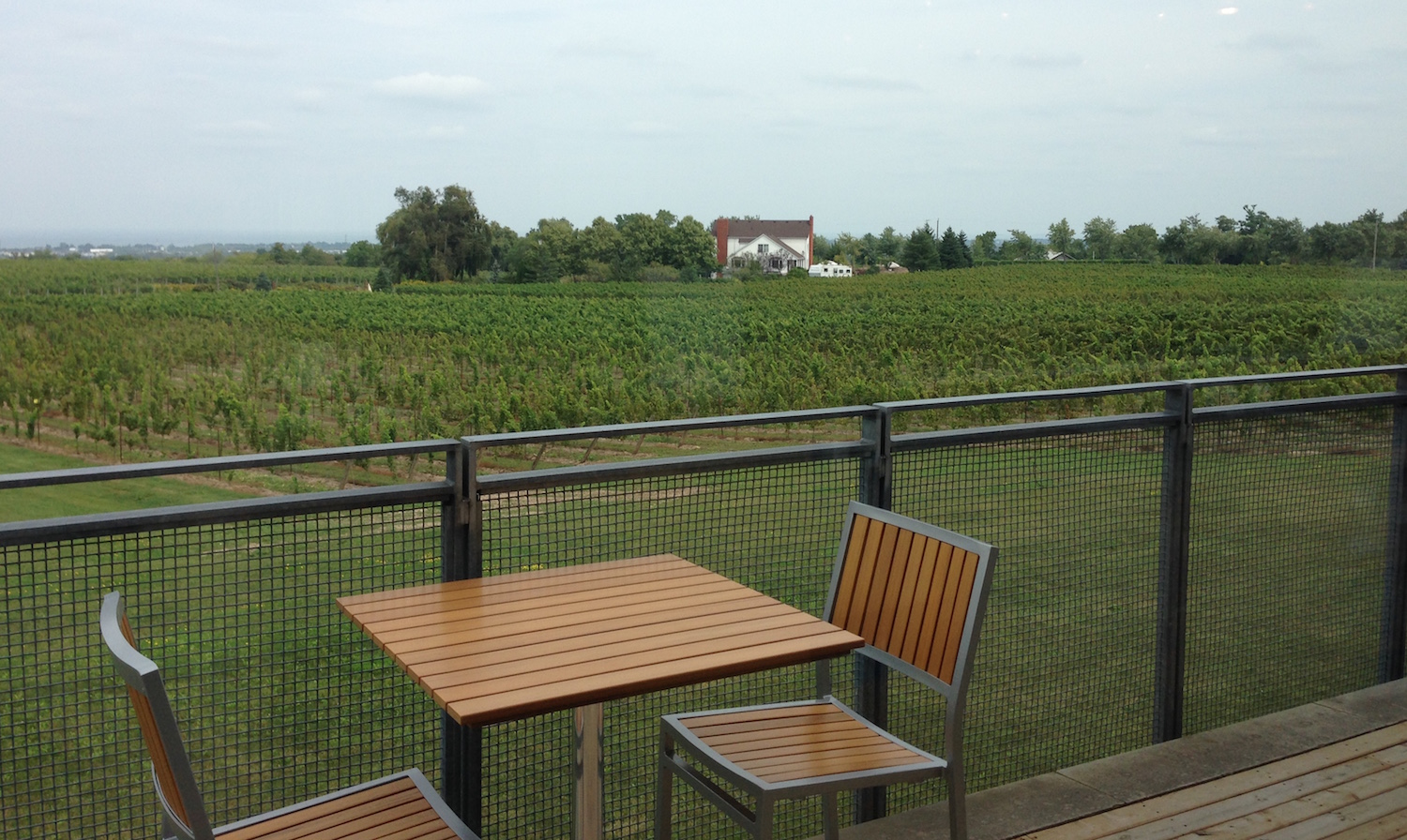 View over the vinyards

You should definitely visit Fielding Estate if you're in the Niagara area. Or keep an eye out for their wines. They're super-tasty!

Next up, I'll be posting about delicious food and drink we've had since we've been in Toronto.