After leaving New York, we flew down to Jacksonville, Florida. We borrowed a car from Hampton's grandfather and started the next portion of our journey: the East Cost road trip. Hampton had been invited to conferences in Raleigh and Orlando, plus we have family in North Carolina and DC, so we decided to drive around a little and I'd get to see a few more of the off-the-beaten-track parts of the South.

Our first leg was from Jacksonville to Greenville, South Carolina. Hampton went to college at Furman – just north of the town.

The drive up was lonnng – it took us about eight hours (including stops and some hellish traffic around Columbia). We passed through Georgia: 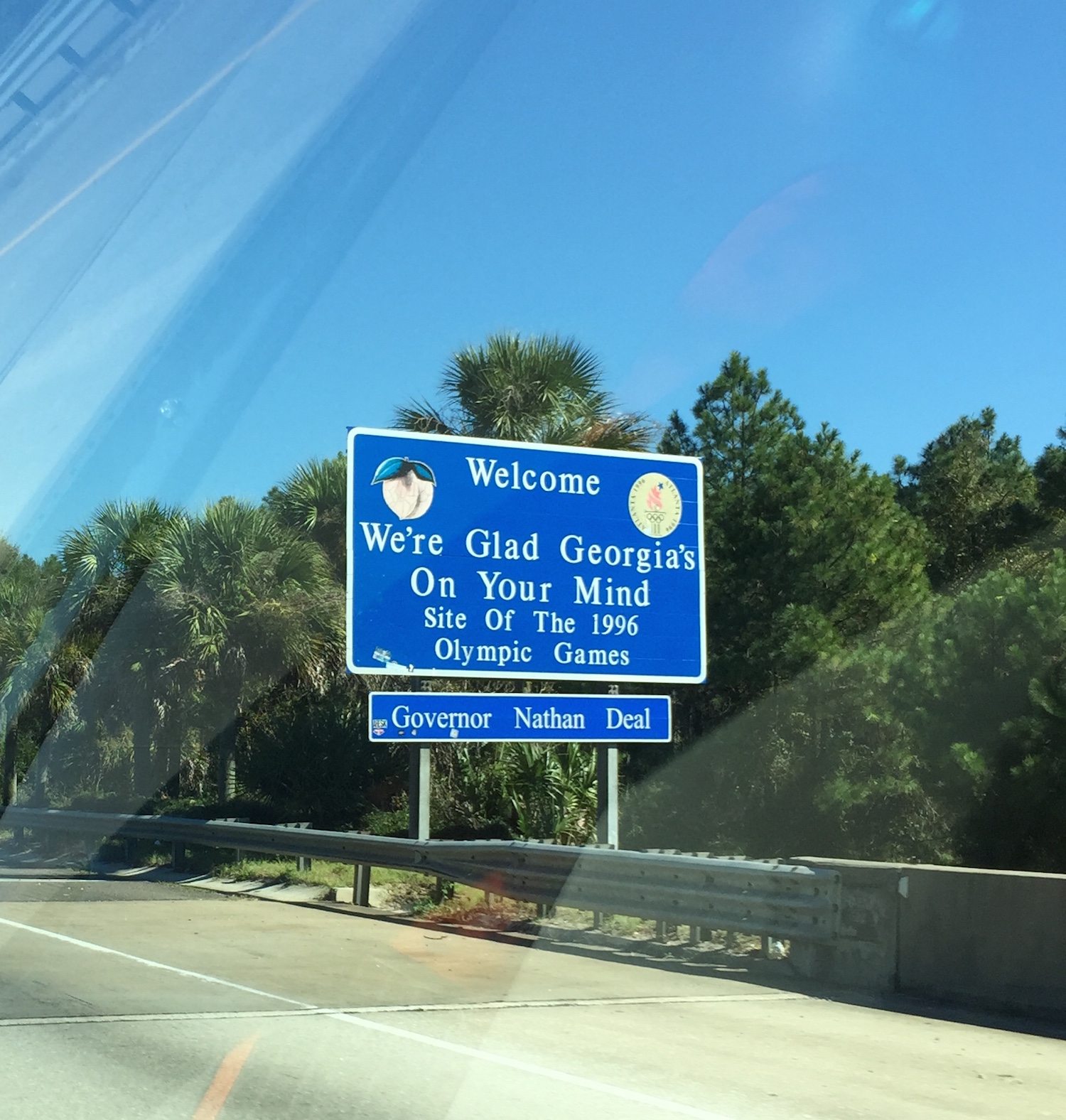 Is the 1996 Olympics the only thing Georgia is proud of?

And into South Carolina:

After driving west across most of South Carolina, we stayed in Greenville for one night. It was a neat town, with a fair few restaurants and it was pretty lively at night. There was a young kid busking – doing magic tricks with his Dad, which was super-adorable.

We went to Furman the next morning. It's a self-contained campus and is quite beautiful. There's a lake surrounded by trees and a bell tower on one end. 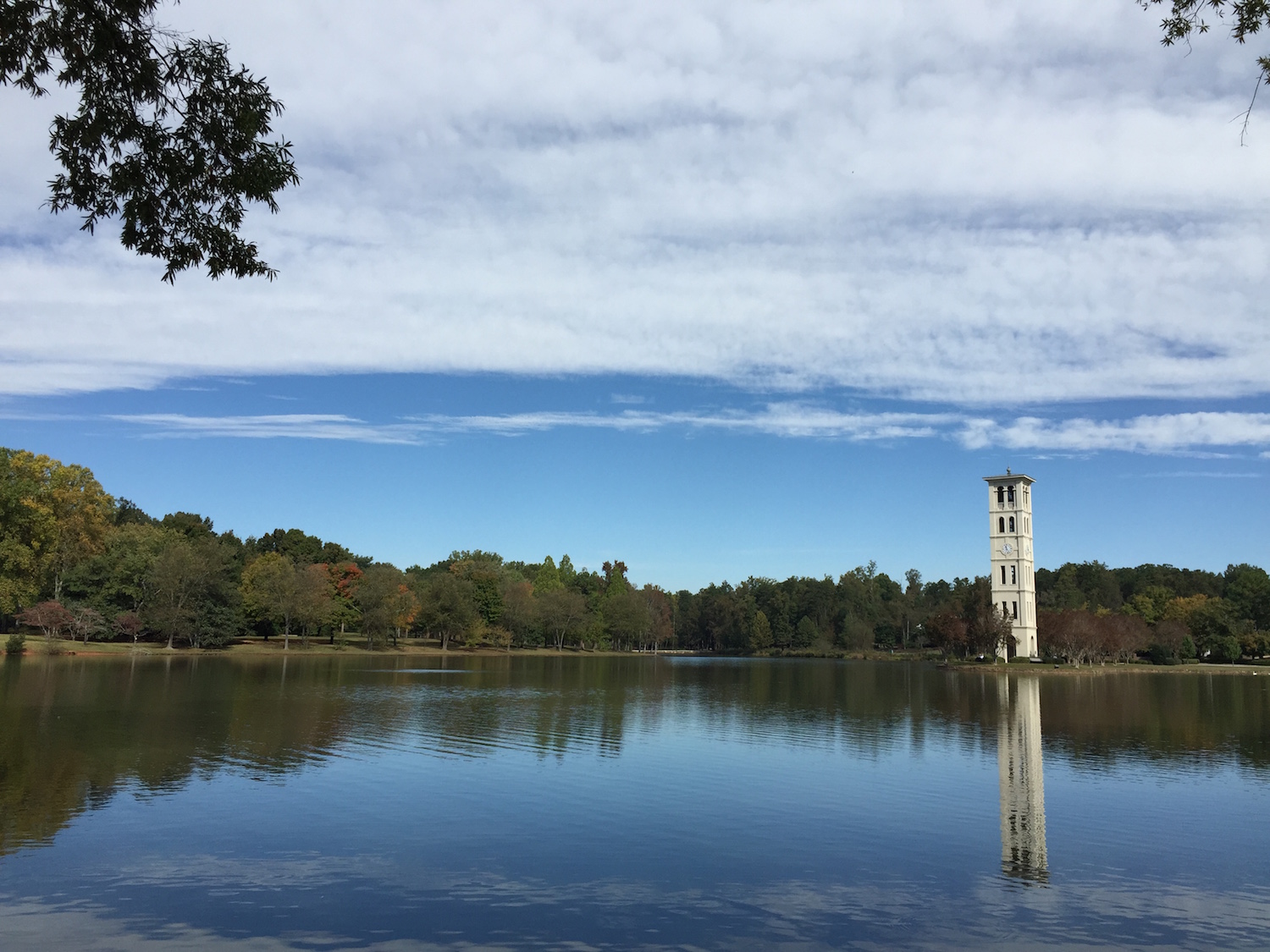 It was weird being at Hampton's old university. I think it was a strange trip for him, as he started recalling tales of parties or particular professors. What was also cool to see was the football pitch where Clint Dempsey got his start.

After that, we continued into the Nantahala National Forest. There were a ton of beautiful lookout spots and hiking bits on the way there. Here's a few: 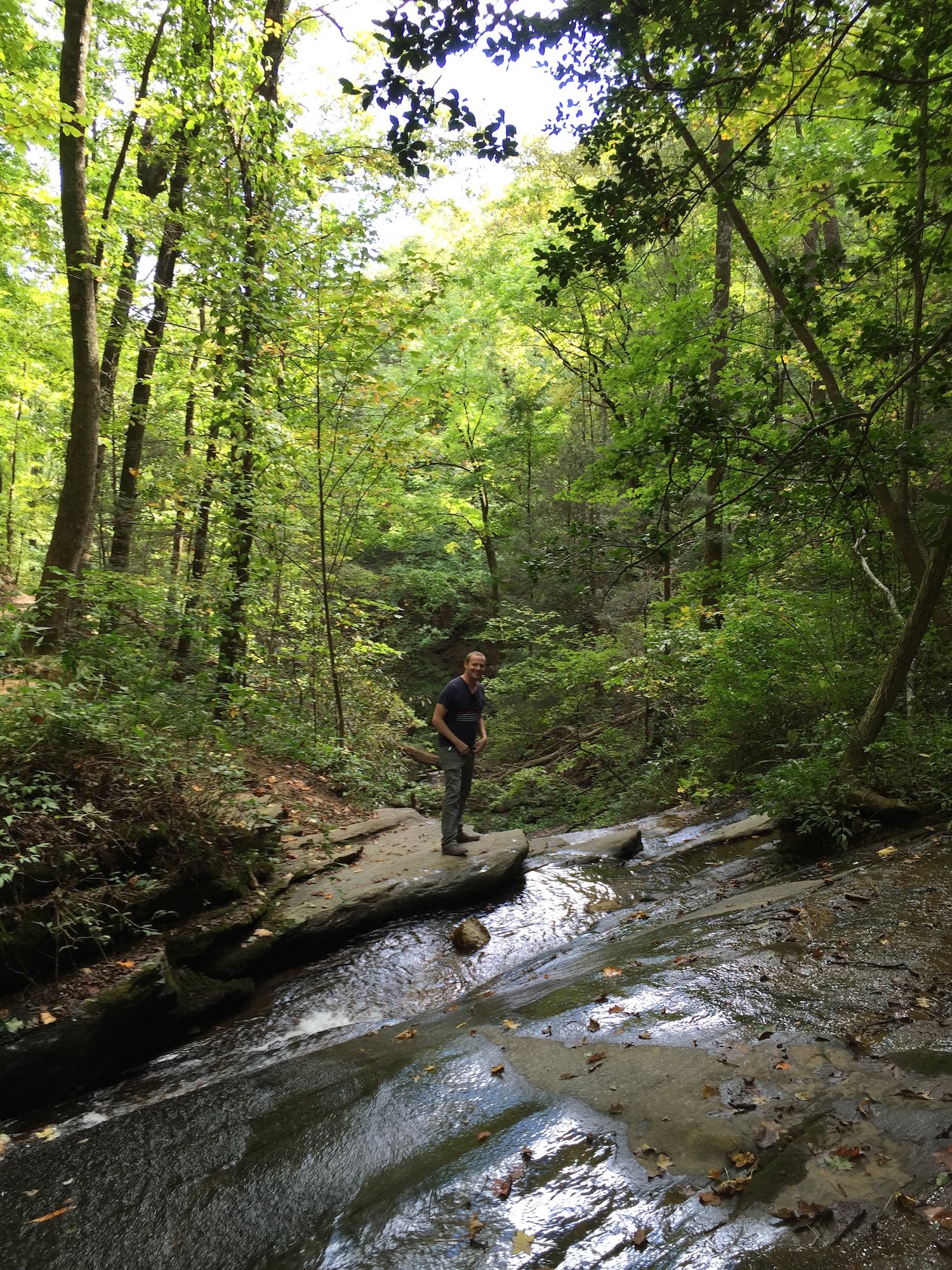 Some hiking trail that ended up being way too long

Table rock was a little unnerving. It's basically a large, gently-sloping rock overlooking the forest. Every time you think you're at the edge, you can walk a little bit further down. It was strange seeing people further down the rock and thinking, "Wow, they're in a dangerous spot!"... and then passing them.

Of course, driving around the South you see some interesting decorations.

We drove further up into the mountains and stayed at the Highlands Inn Lodge in Highlands, North Carolina. It was a nice place, although a little out of the centre (but I'm sure you could walk if necessary).

The leaves were amazing – every road was a bordered with greens, yellows, oranges, reds and browns. 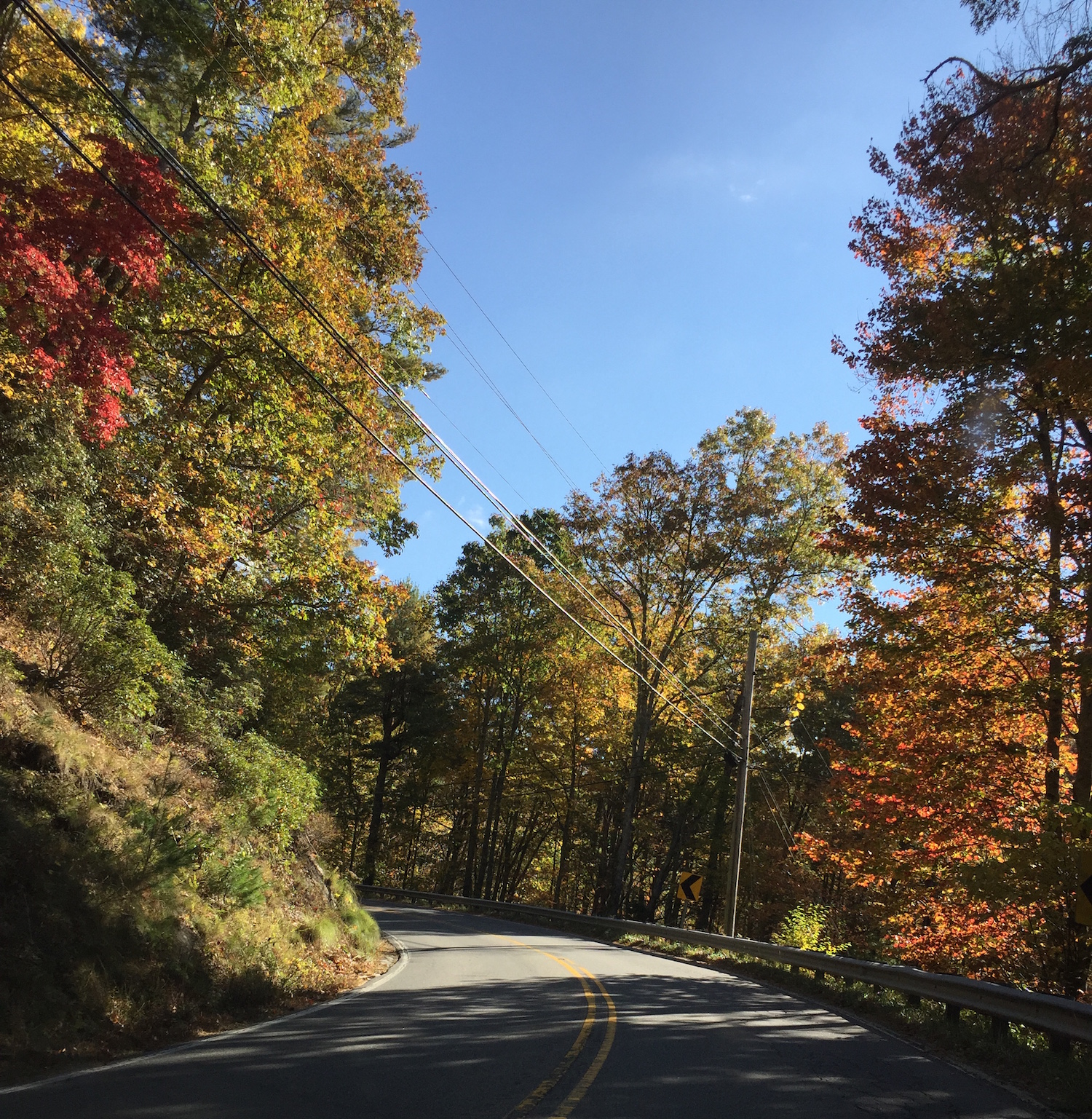 After spending a couple of nights in Highlands, we drove along the Blue Ridge Parkway through the forest. It's a gorgeous road – you're basically on the ridge of the mountain range and have epic views from both sides.

There's stopping points every few hundred yards because there's that many photogenic scenes. 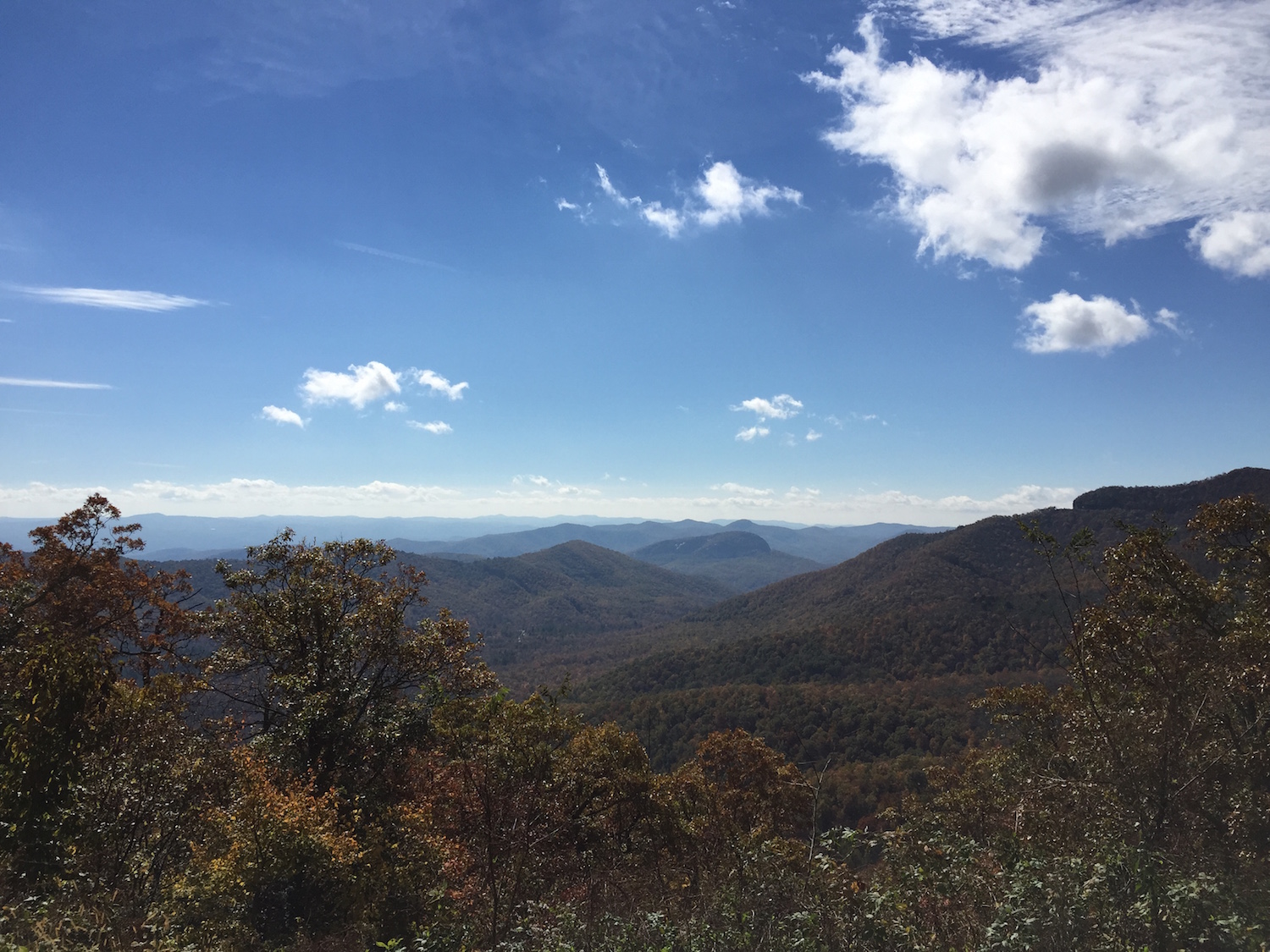 Panorama of the Blue Ridge Parkway

We were heading east across North Carolina to our next destination: Asheville. I'll write about that and our time in Raleigh in my next post!