Driving through Virginia is great – mostly because it reminds me of England. Gently rolling hills, lots of farms, big oak trees.

Charlottesville was our first stop in Virginia. It's extremely beautiful and worth a visit – it's only a couple of hours to drive from Washington D.C. Just south of Charlottesville is Monticello, the residence of Thomas Jefferson. Compared with the absurd cost to visit Biltmore, Monticello is a steal – $25 per person. I'd suggest booking in advance, especially on busy days. You can only go through the main part of the house as part of a guided tour – and those are every 15 minutes or so. It's nice to know when you need to show up. 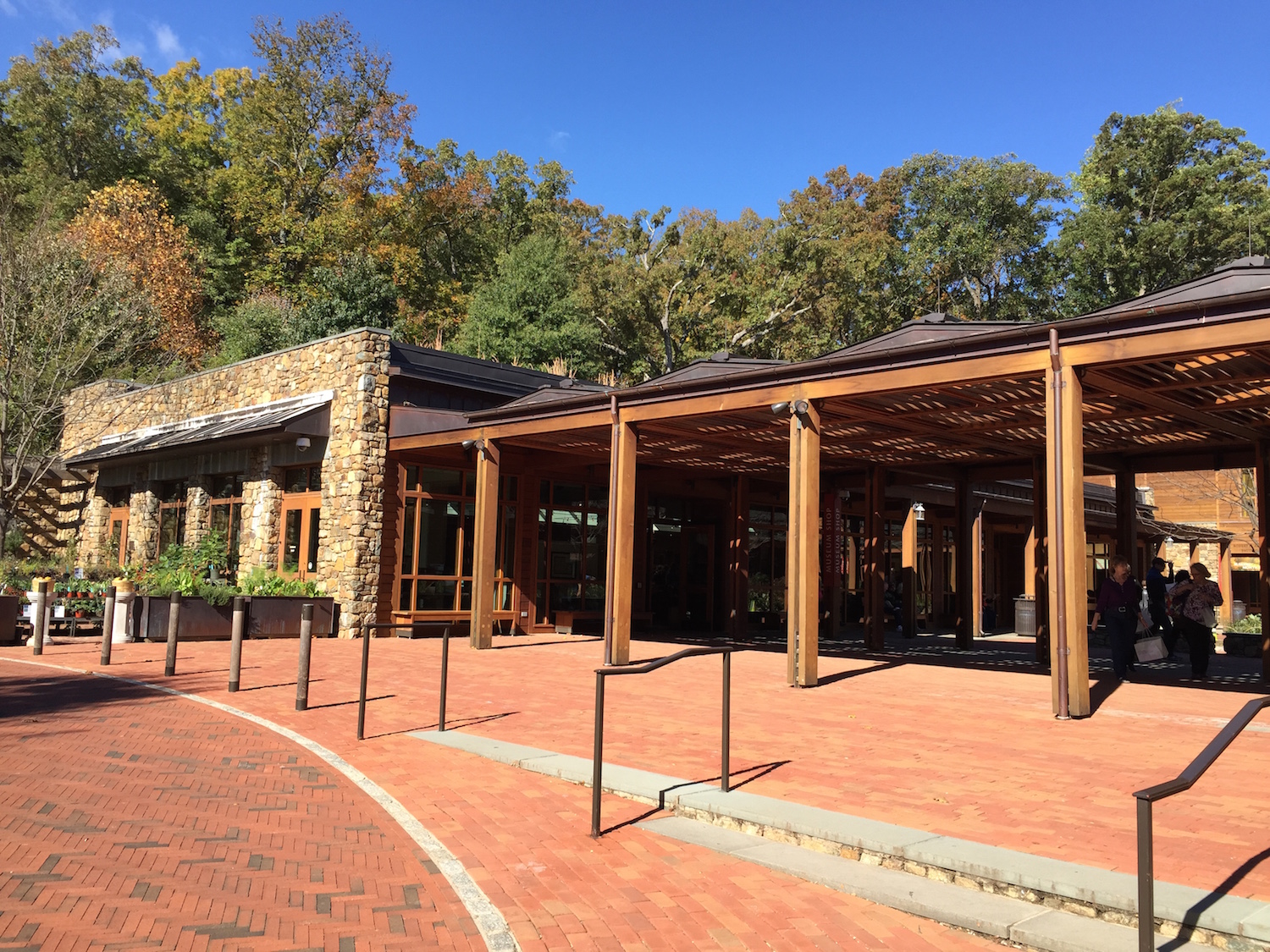 The entrance to Monticello is at the bottom of a hill. It's got the usual visitor centre stuff – a gift shop, some small exhibits, a café, etc. All the stuff that you can't build next to the UNESCO-protected house.

You have two options for getting to the house itself – a five-minute bus ride or a fifteen-minute walk. We arrived about half an hour before our allotted tour and walked up. It's a great walk (although mostly uphill) and I'd recommend doing it if you have the time/physical capability. 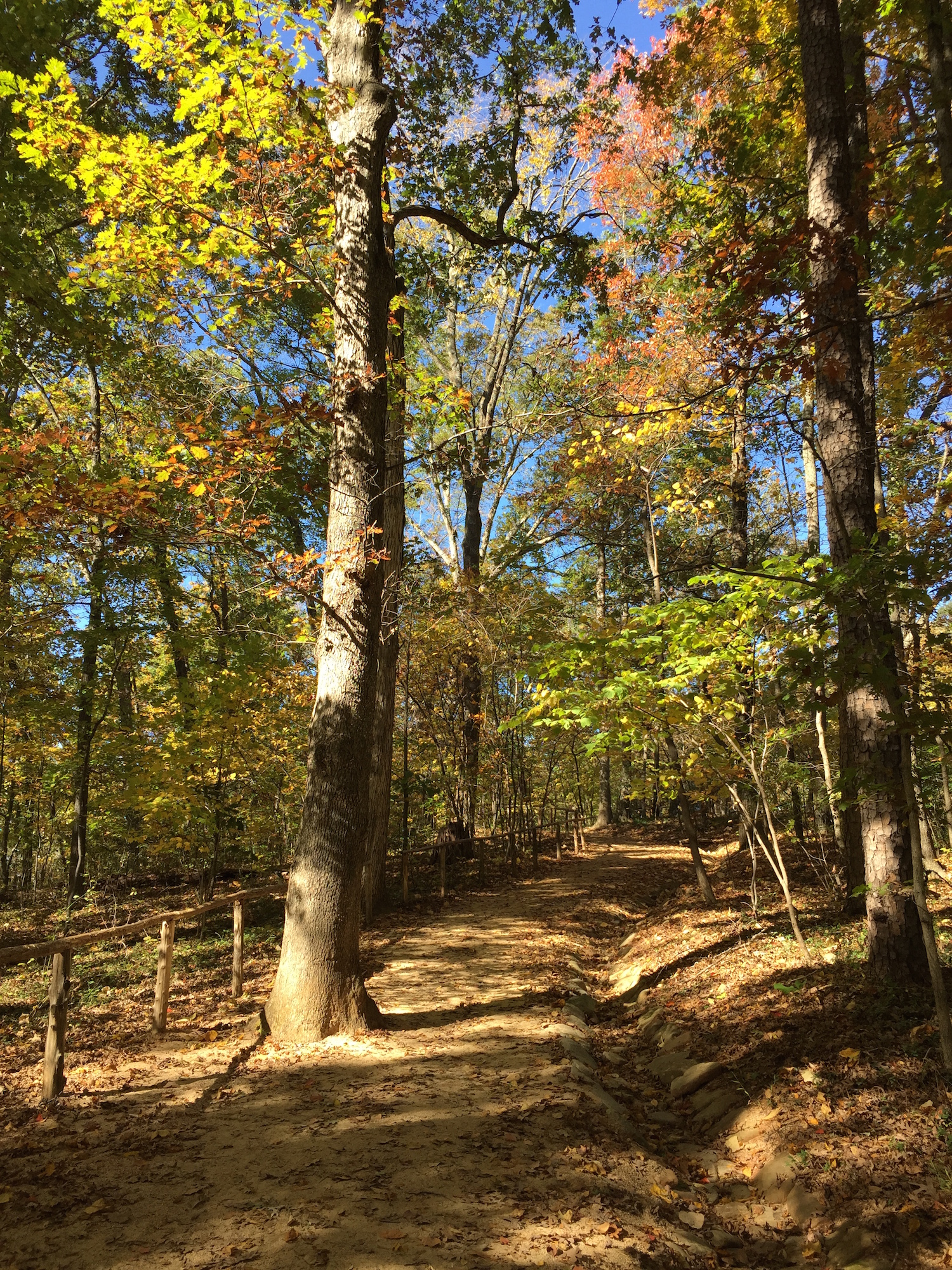 Walk up to Monticello

On the way up, you pass by the graveyard where Thomas Jefferson is buried. 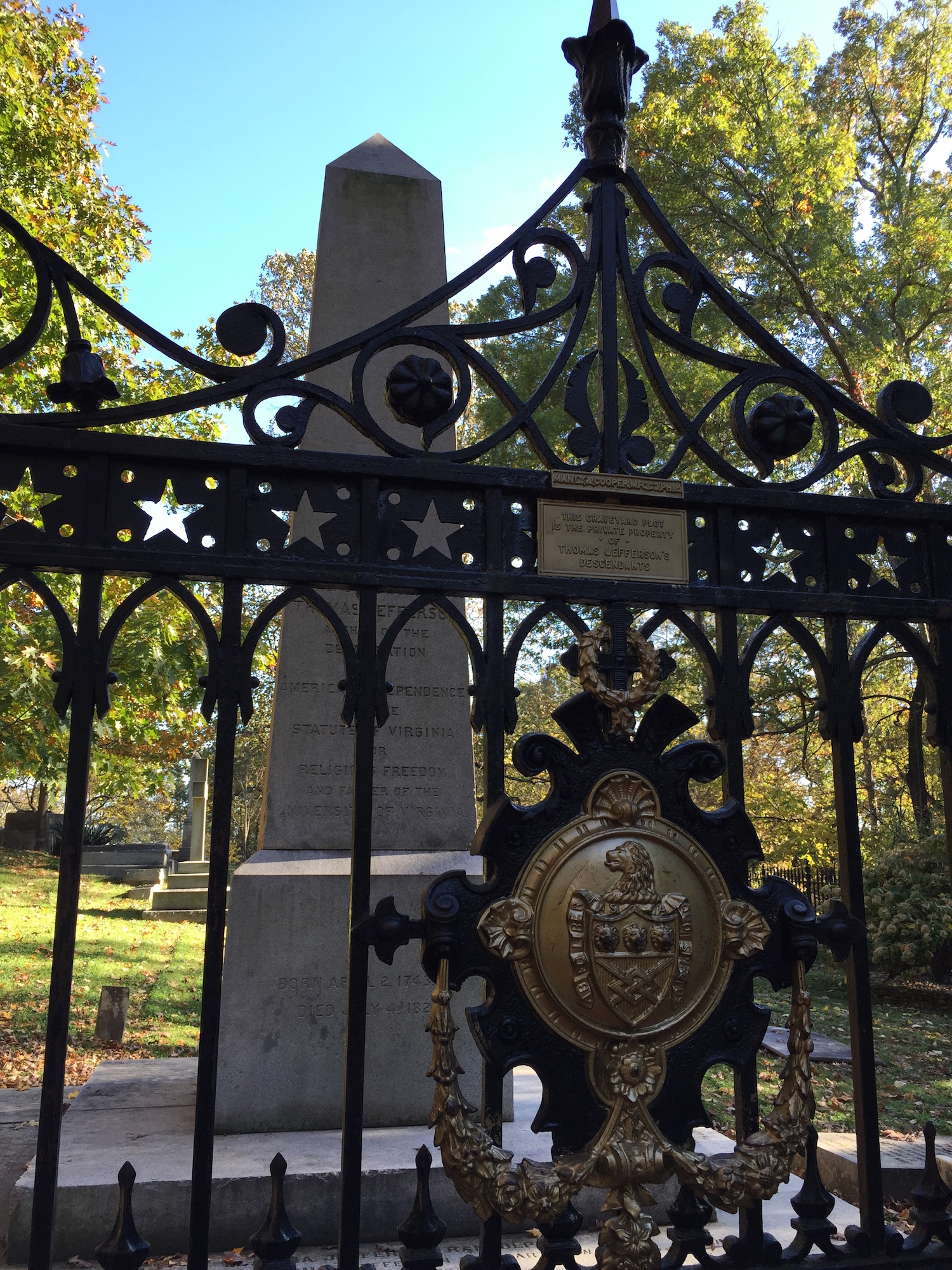 The grounds are expansive and the architecture of the complex is unique. There are a couple of terraces stretching along both sides of the house with servant quarters underneath. It's fun to wander around the outside a little. But be careful with your timing: the tours start far before their posted time. We arrived ten minutes before ours was due to start, and the group was already together and being told about the surrounding gardens.

The tour was equally interesting and overwhelming for me. I didn't know much about Thomas Jefferson – my British education wasn't focussed on American history. There were a lot of "obvious" facts that, for me, weren't so obvious. "You all know that Jefferson and Adams had a fraught relationship," "naturally you all know about Sally Hemings." I had to nudge Hampton and ask him to fill in missing details. So if you're not American (or didn't pay attention in history), I'd recommend reading up a little on his life before you come.

The house had some interesting areas. The entrance hall was used by Jefferson as a museum of sorts to prove to visitors that the Americas were ecologically and culturally distinct from the rest of Europe. Jefferson's bed was in an alcove that split his bedroom from his office. You can't take pictures inside, so I don't have any images of this stuff. But I do have a goofy photo of us standing outside the back of the house. 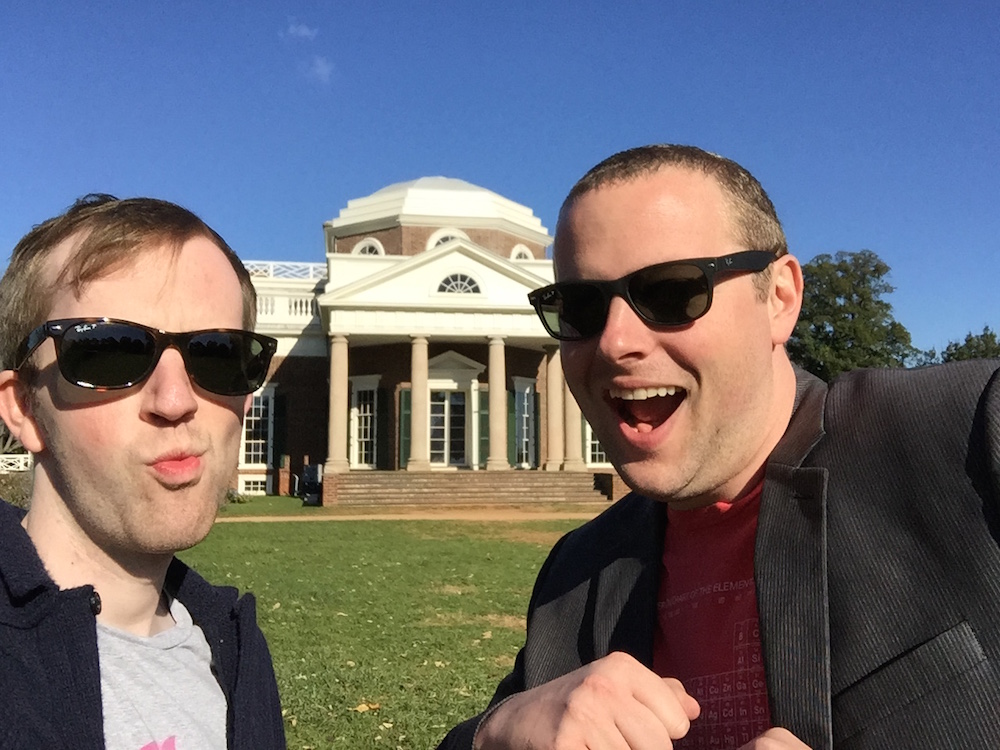 It's really picturesque on the grounds, and it's easy to take gorgeous photos. 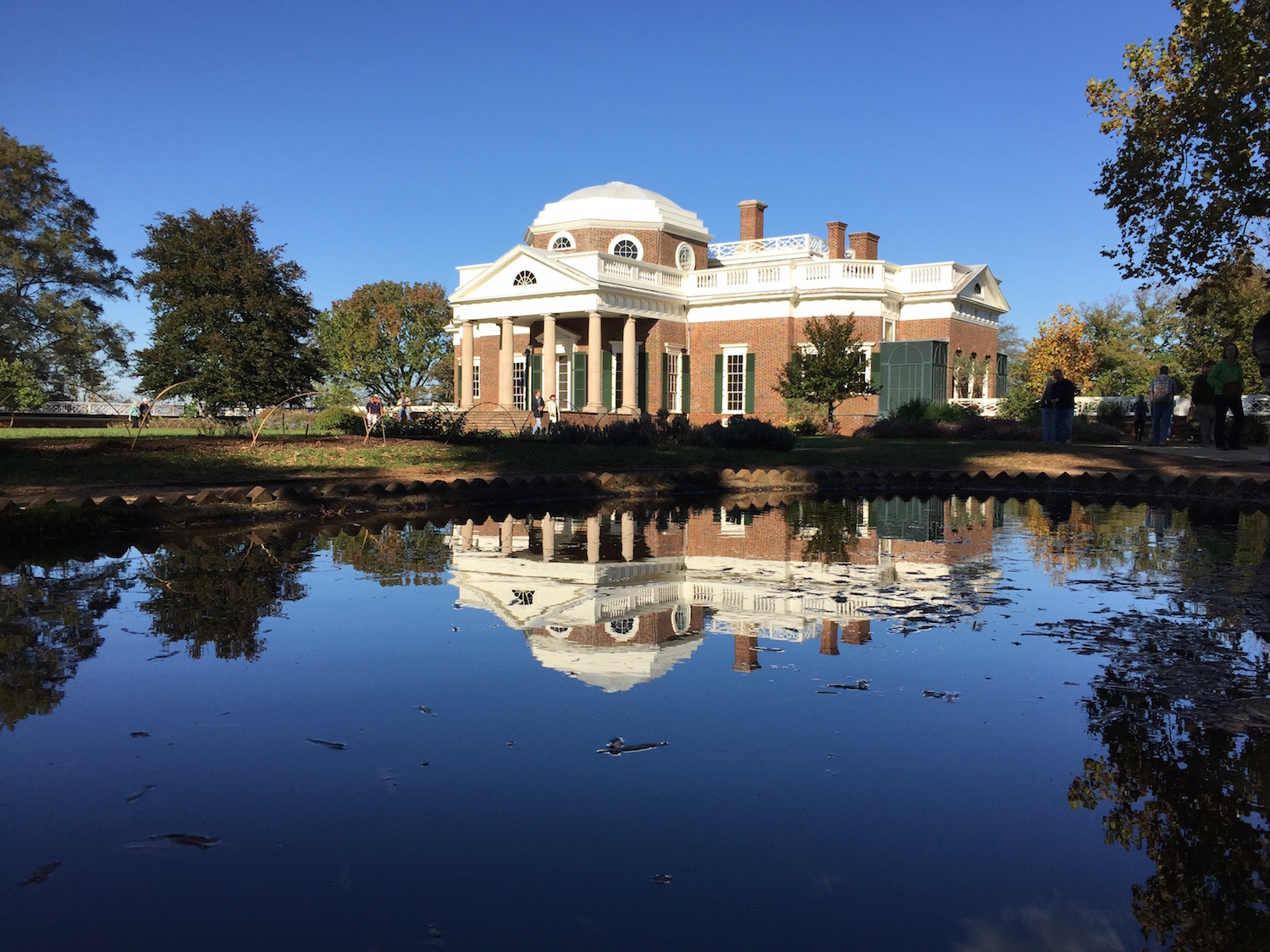 Afterwards, we drove through Charlottesville and briefly saw the Jefferson-designed University of Virginia.

That night we stayed in Staunton. It's a small town with a quiet centre and the Woodrow Wilson Presidential Library. We grabbed a Priceline deal at the Stonewall Jackson Hotel, which despite its questionable name, was fairly decent.

We found a well-reviewed cocktail bar and restaurant called Zynodoa. It was packed at 7:30pm on a Tuesday. Its decor and cocktails wouldn't have been out of place in New York. The same went for its prices – the cheapest entrée was $25. So we decided to go somewhere that seemed a little lower-rent: a BBQ place called Mill Street Grill – it had great reviews so we were pretty excited.

I wish we'd have stuck with Zynodoa. The entrées at Mill Street Grill were about the same price (~$25), and the menu reminded me of something out of Kitchen Nightmares. You know how Gordon Ramsay always complains when a menu is too large or haphazard? This menu was exactly that. There was Italian food, steaks, salads, BBQ, seafood, sandwiches. Hampton couldn't decide what he wanted, so he asked our waitress to pick from one of three. She didn't ask something like "Do you like pasta?" – she said "How hungry are you?" A bad sign.

We got our entrées and they were fairly tasty, but definitely not worth the price tag (why is some small town in Virginia charging so much?). The decor was bizarre – they had a bunch of deflated star and moon balloons hanging from the ceiling, a stained-glass window and a bust of Elvis (!?) on the bar. I'd avoid it if you're ever in Staunton.

The next day we drove to Lexington, VA – an even tinier town whose main attraction is the two universities. We were there to see Washington & Lee, where Hampton's father and brother both studied. 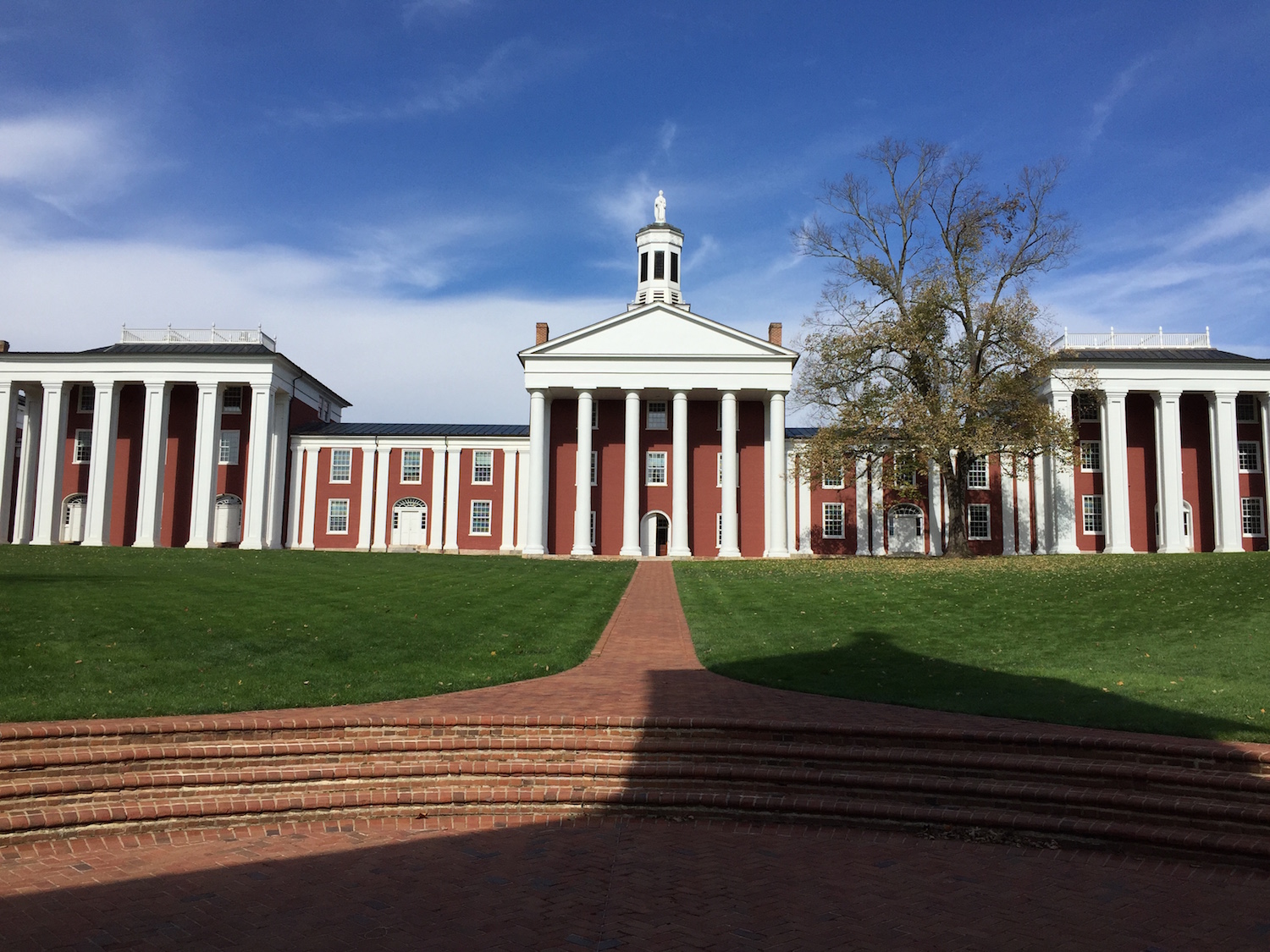 Lee Chapel is opposite the main buildings of the university, and we were lucky enough to catch a historian giving a short tour of the chapel explaining its history.

Inside it's all white. There are two portraits above the stage – one of George Washington and one of Robert E. Lee. I found the Washington one amusing as he's in his British Army uniform. It's by Charles Willson Peale, and I had to get a photo of it. 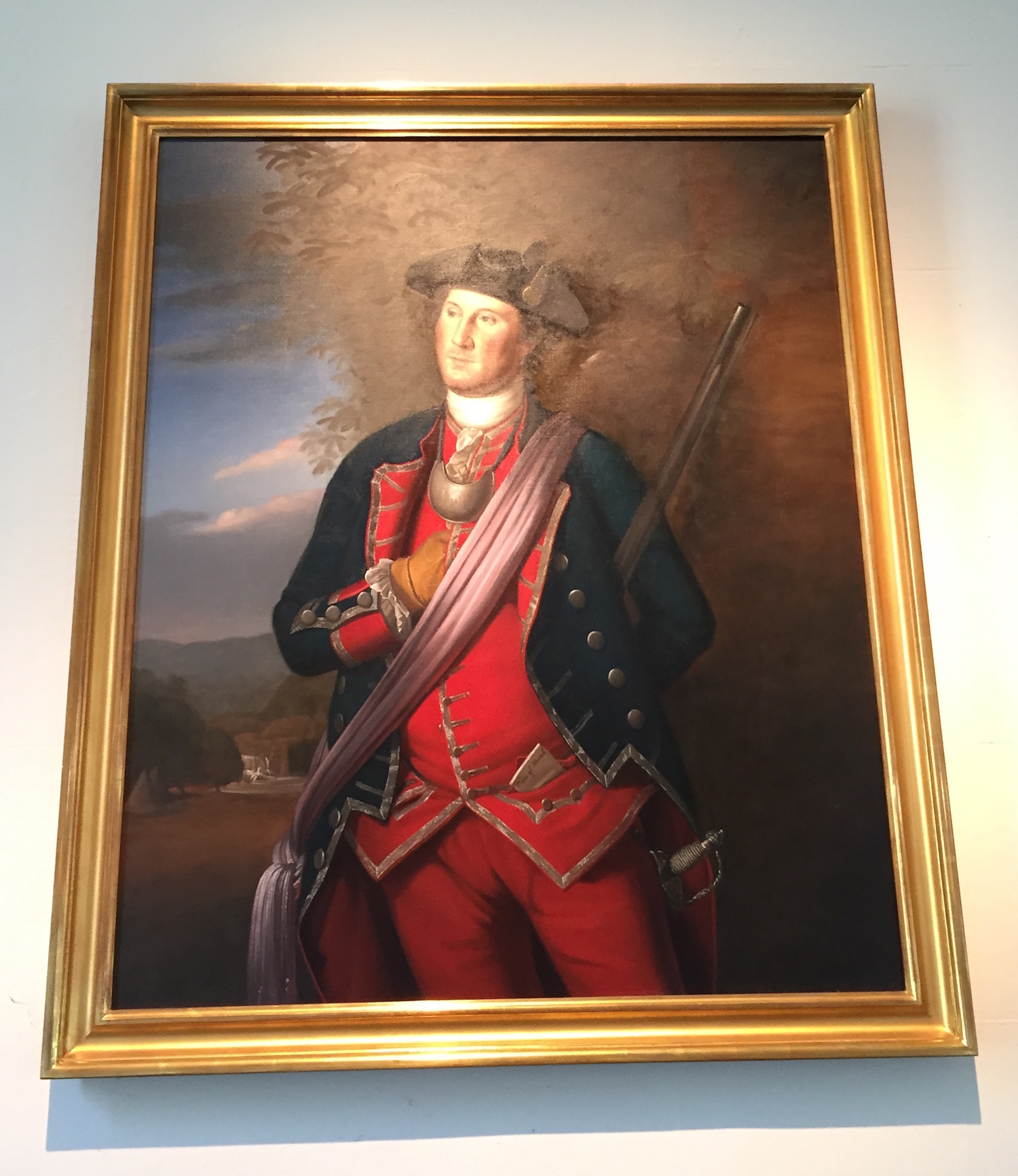 In the back of the chapel is a statue of Lee. It's not a tomb – he's actually buried underneath the chapel in a crypt.

They also have a reconstruction of his office under the chapel. Right outside is buried Lee's beloved horse, Traveller 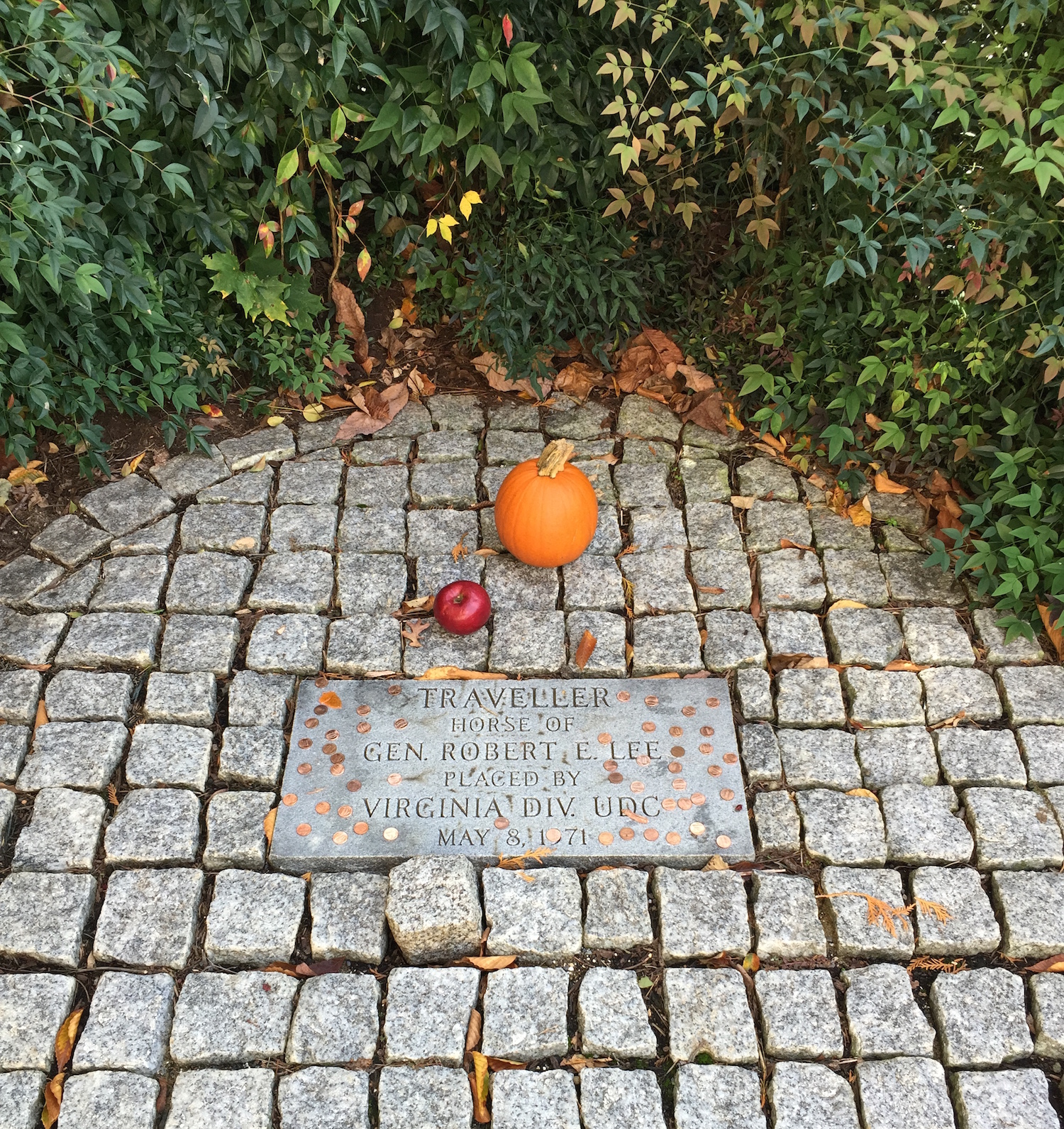 Visiting Washington & Lee was a nice detour on our trip. I've heard a lot about it from Hampton's father, and it was nice to see that.

A brief aside: I'm still not comfortable with the promotion – if not glorification – of Confederate generals that occurs in the South. I've heard various justifications on numerous occasions. I understand that Lee himself didn't agree with slavery, but had to go with what his home state of Virginia wanted. However it still feels wrong. And it's still jarring when I see names like Stonewall Jackson or Robert E. Lee on schools or highways.

We made a brief family-history stop on the way there. I'll probably write a longer blog post about this in the future, as it might be handy for some Marshall descendants to know about. In short, we visited Happy Creek. One of Hampton's family lineages is the Marshall family. They owned a property in Virginia called Happy Creek which, around 1912, burned down. Here's the ruins: 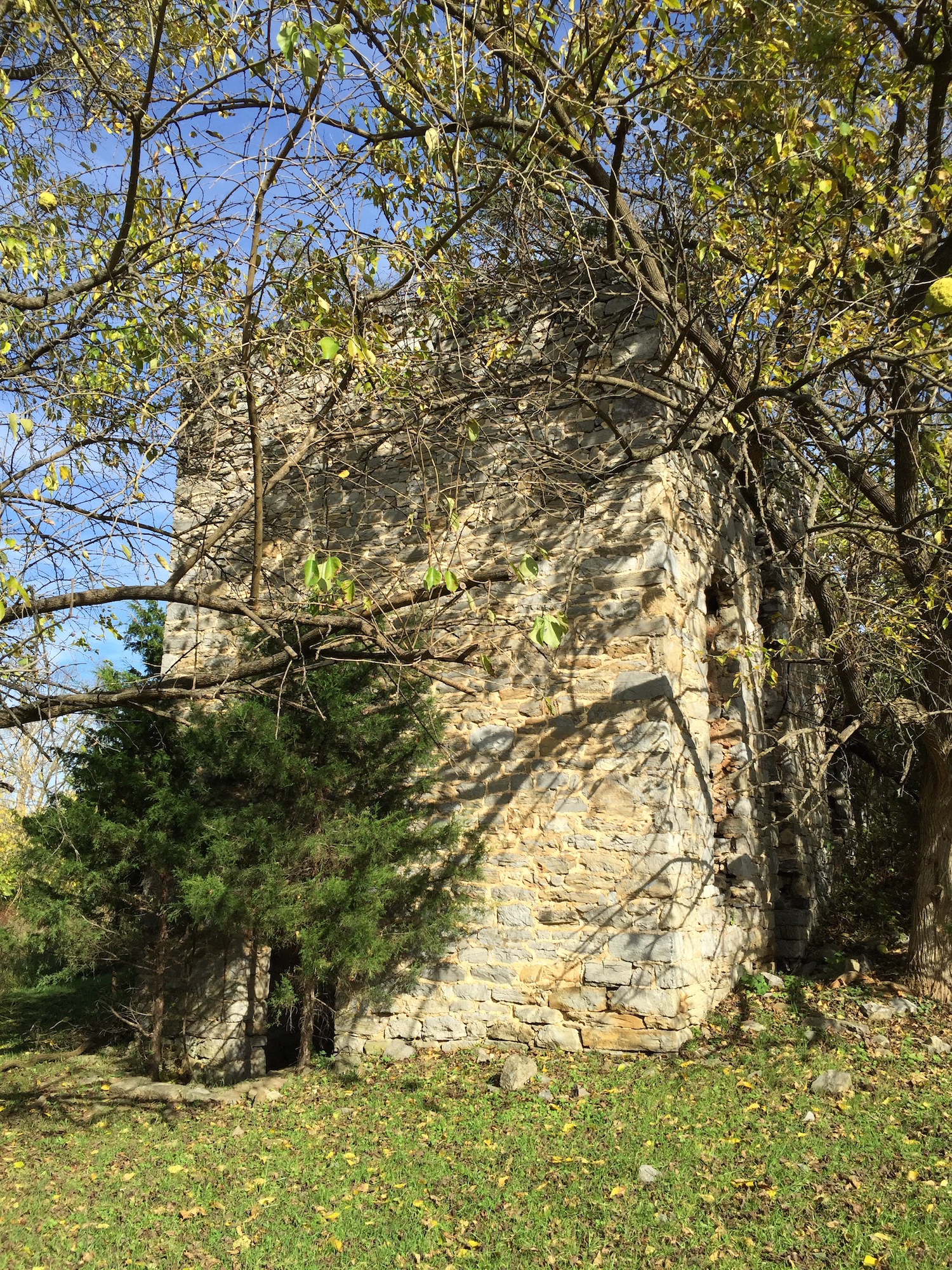 Nearby, there's the Marshall family graveyard. 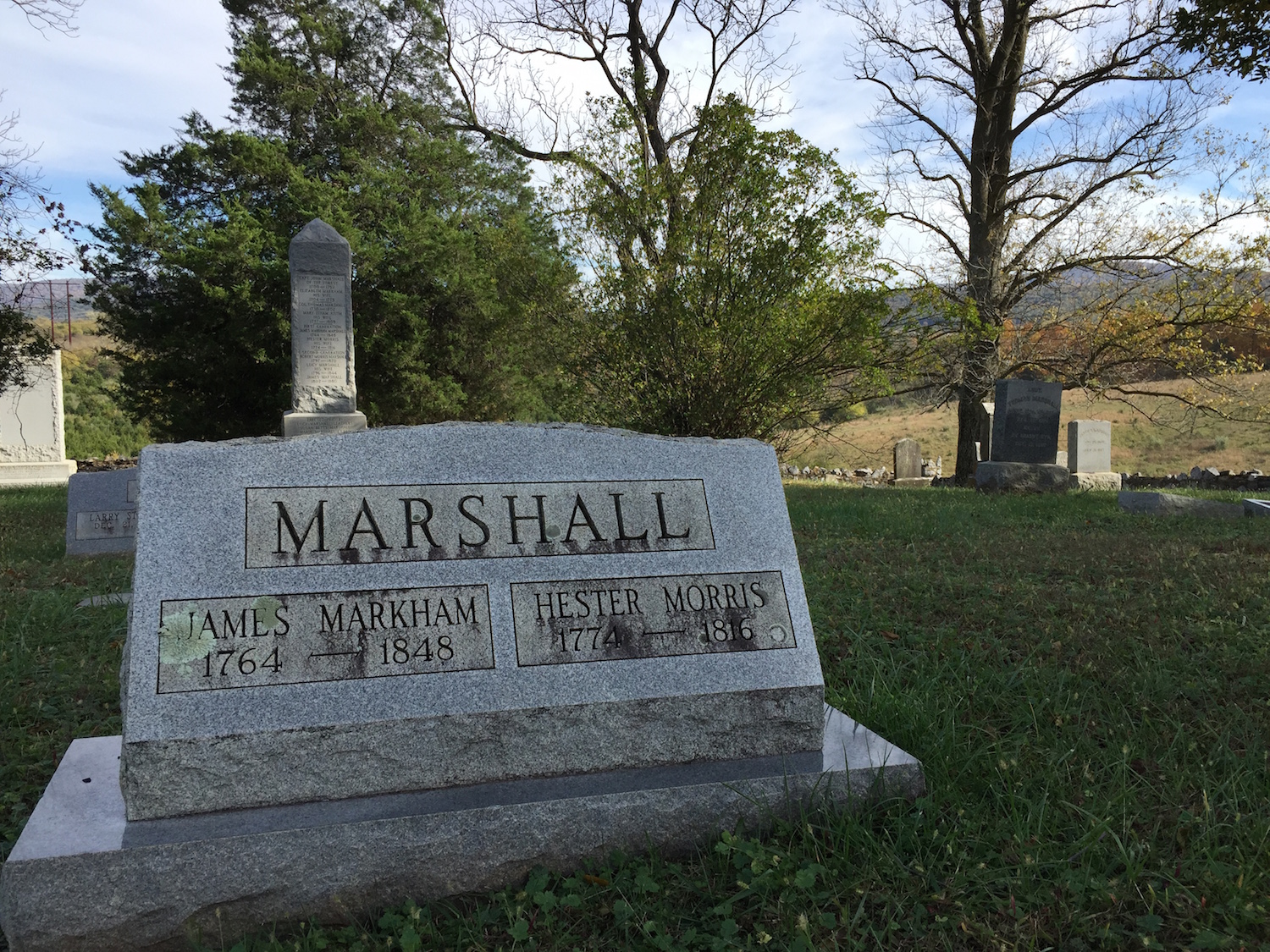 After visiting, we went to Washington D.C. to see our niece. Then we had a long drive back to Jacksonville – with one short stopover in Savannah because... well, why not? Savannah is beautiful. Now we're back in Jacksonville for a few days before heading to Orlando for a conference and (cue spooky music) Halloween Horror Nights.