Halloween Horror Nights (also known as "HHN") is an annual even put on by the Universal Studios resort in Florida. On select evenings for some of September and most of October, the park is transformed into a halloween scare-park.

There are usually eight or so haunted houses built in soundstages. These will be themed around something, and you walk through decorated rooms while loud noises play and actors jump out at you. There are also scare zones – areas of the park usually just for walking between rides. In these, there will be a few props around a theme, plus some scare actors who move amongst the crowds. 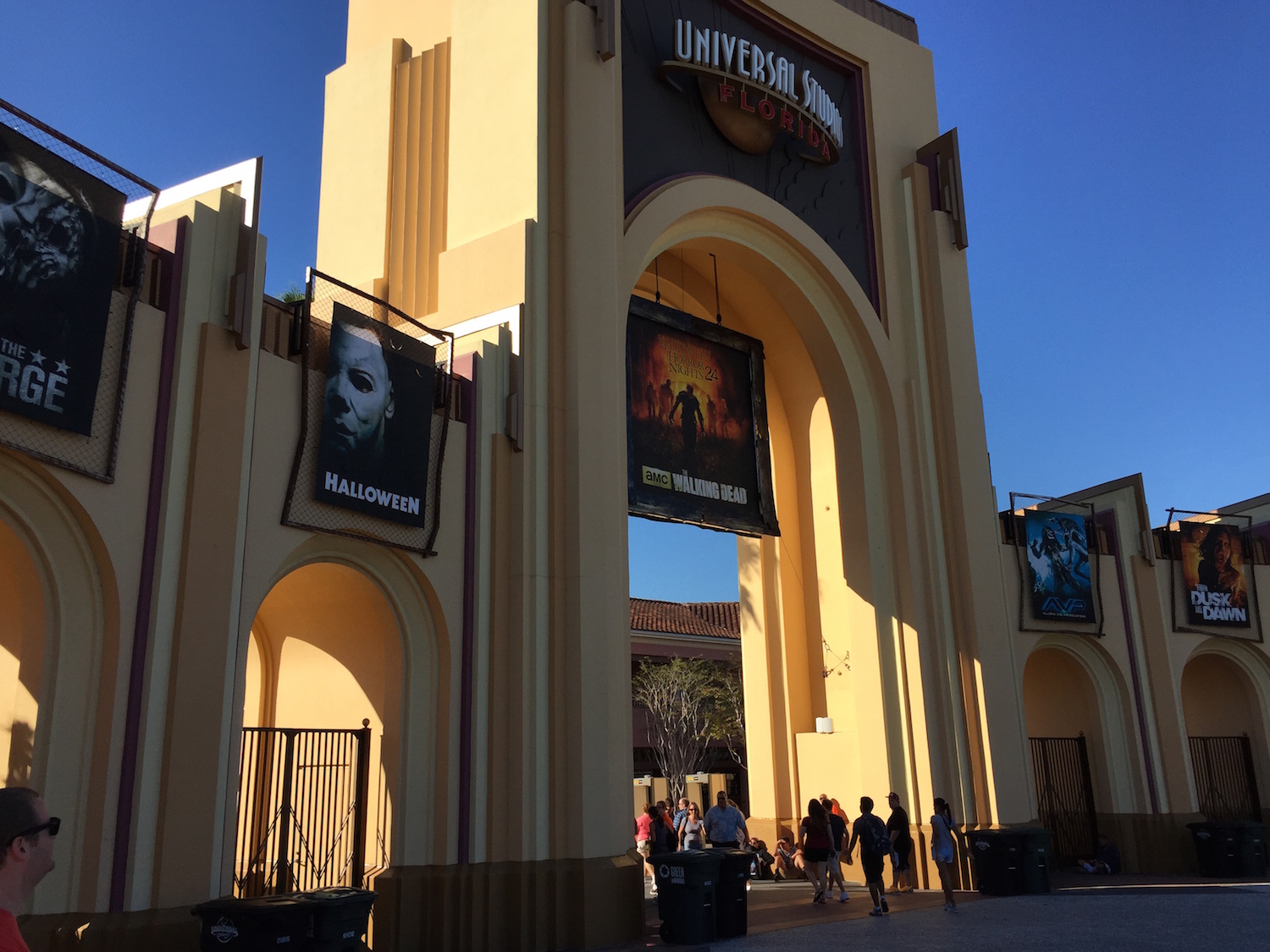 This year's event was a blast. We were worried that attending on 31st October (Halloween itself), and because it was a Friday this year, the queues would be incredibly long. We bought the express pass (an extra cost on top of the regular cost) but we were still unsure as to whether we'd be stuck in two-hour-plus lines to see the houses. The express pass often only cuts the regular lines down by half.

So, we implemented a plan laid out in Orlando Informer – by far the best resource to look at if you're thinking of visiting HHN. The trick to HHN is that you can get early entry if you have a ticket for Universal Studios that day.

The park closes at 5pm on HHN nights. Around 4:45pm, the staff set up areas of the park where you can sit and wait until HHN begins. The official start time of HHN is 6:30pm. However you're often let out of the areas closer to 5:45pm. That's a good chunk of time to explore houses before people are let in.

The best area to wait is in New York at Finnegans, an Irish pub. It's packed in there, but we got some drinks and took them outside. We put our names in for a table (it was a 40-minute wait, but we thought we'd chance it just in case). At about 5:15pm we sat down and ate a quick salad before leaving the "pen" and heading into the event.

The Orlando Informer article gives some great advice – head to the houses first, then do the scare zones. The lines for two of the most popular mazes – The Walking Dead and Alien vs Predator – were 20 minutes, which was great! We did those in quick succession.

The Walking Dead was touted as the largest house they'd done – and it was filled with scare actors. Overall it was entertaining but unmemorable. There was one great scene in a forest, where I truly felt like zombies were coming at me from all sides. But apart from that, it seemed like a bunch of generic zombie scenes. Maybe I wasn't paying attention to season 4 enough?

Alien vs Predator did a great job of putting you in the Weyland-Yutani corporation as the Aliens take over and Predators are brought in to control them. At least, that's what I think the gist of the house was – it wasn't incredibly clear. I'm an Alien fan, so I mostly delighted in the incredible puppet animatronics they had. Plus the ending – crawling through a narrow air-duct with an Alien waiting at the end – was an exhilarating finish. 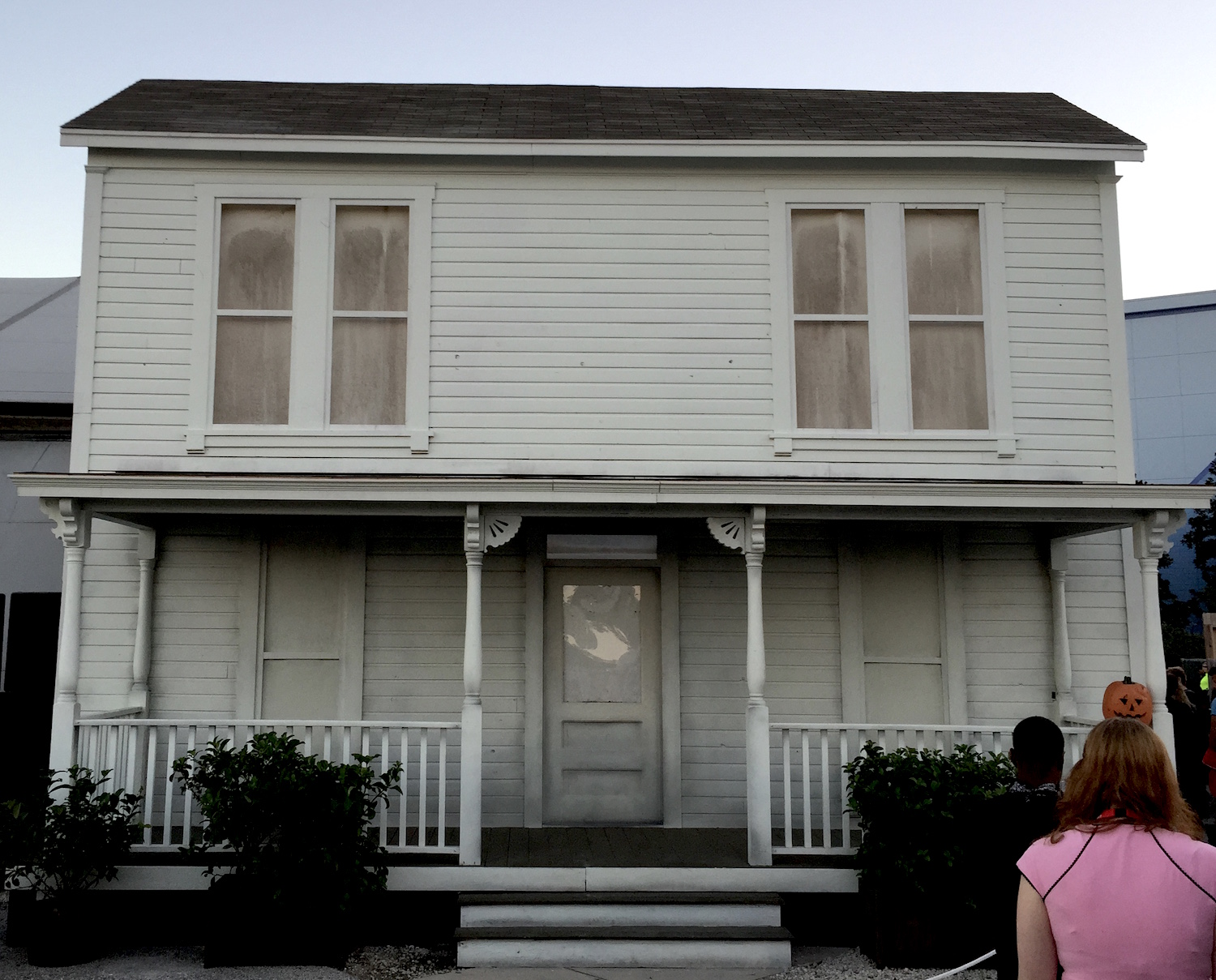 Front of the Halloween house

The house had every major scene from the 1978 classic. It was a lot of fun entering the (almost clichéd) house. The decor was perfectly 70s and I'm glad we had a second pass at the house later on in the evening. There were a number of scenes we missed the first time around.

After these, we did the "non-property" houses. These are houses that aren't based on any existing intellectual property. This year, there were three: Giggles and Gore (about clowns), Roanoake (about cannibals), and Dollhouse of the Damned (about creepy dolls). 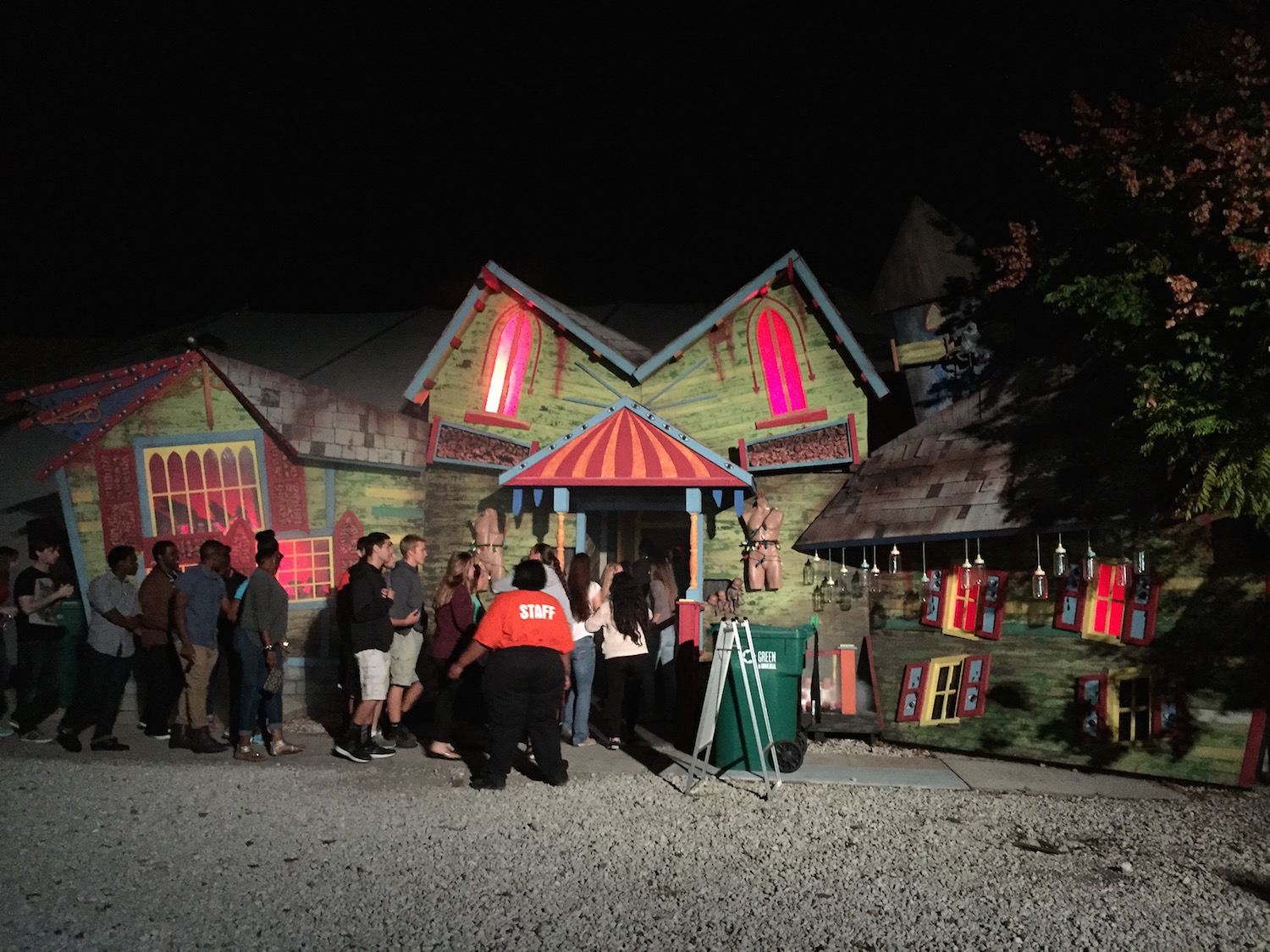 Front of Dollhouse of the Damned

Once we'd done those, we were free to wander around the scare zones and attend the shows (they have special halloween-only live shows during HHN). My favourite scare zone was based around The Purge. Hampton and I both enjoyed the films, and the theme fits well with the New York area of Universal Studios. 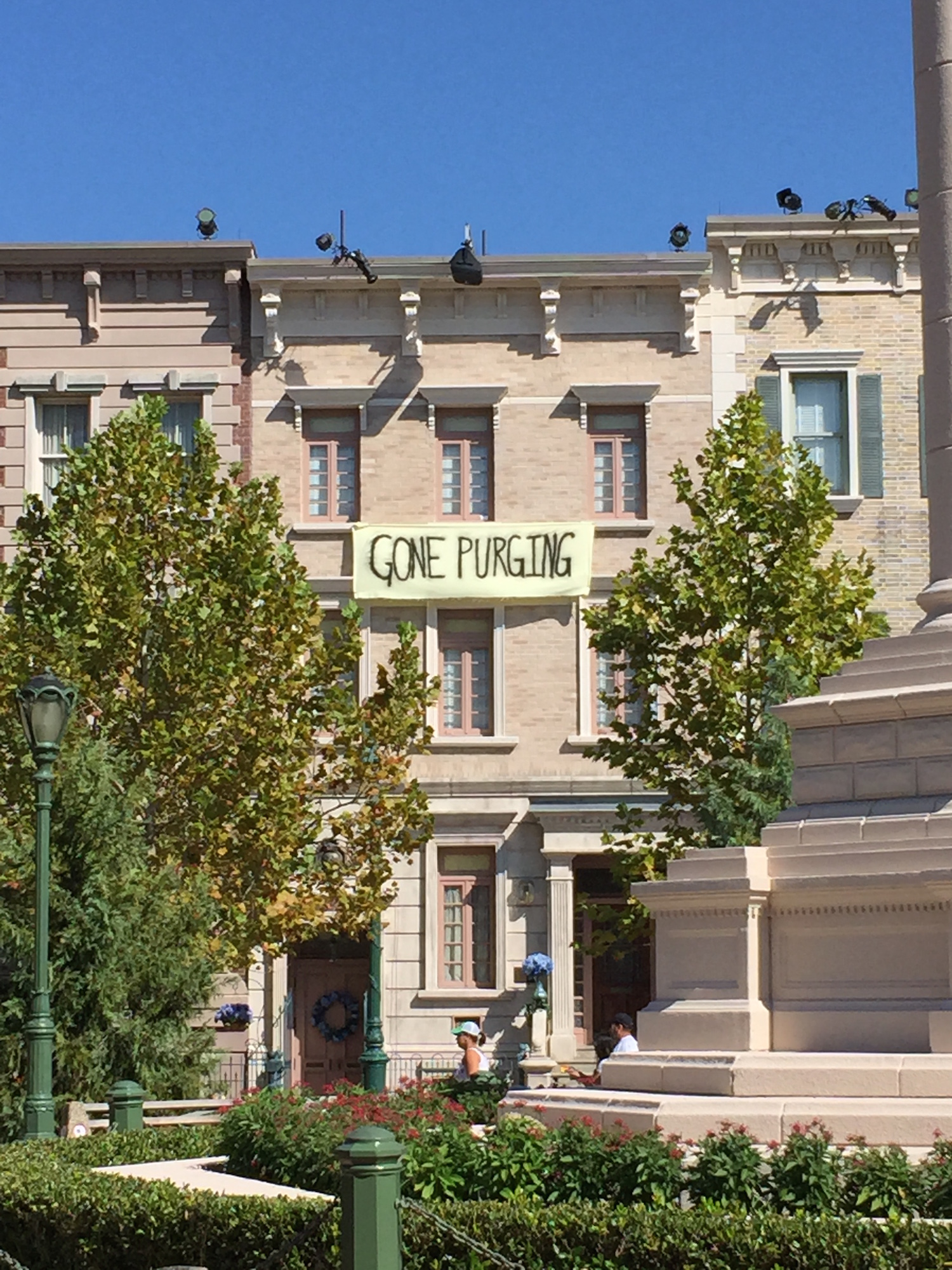 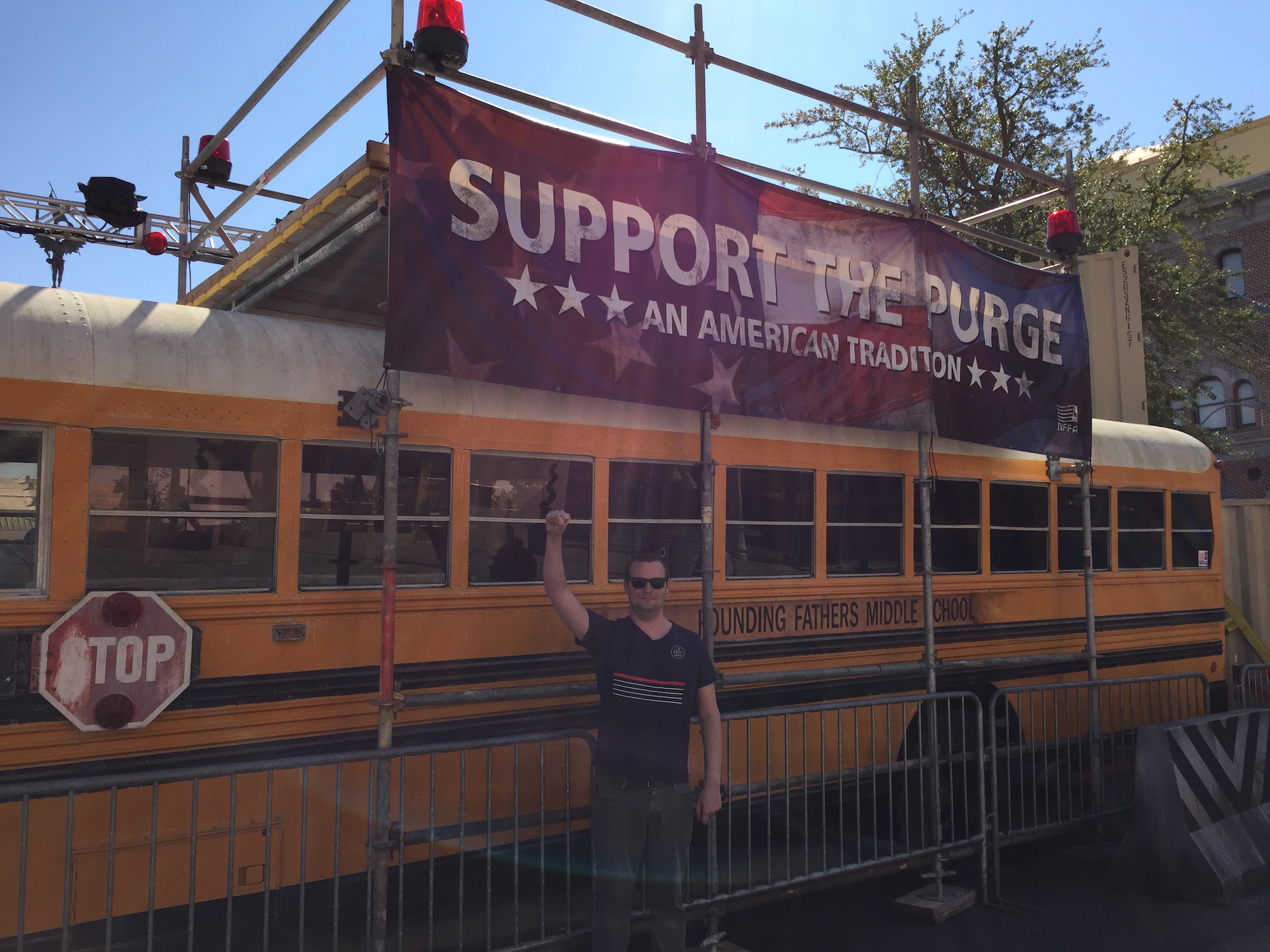 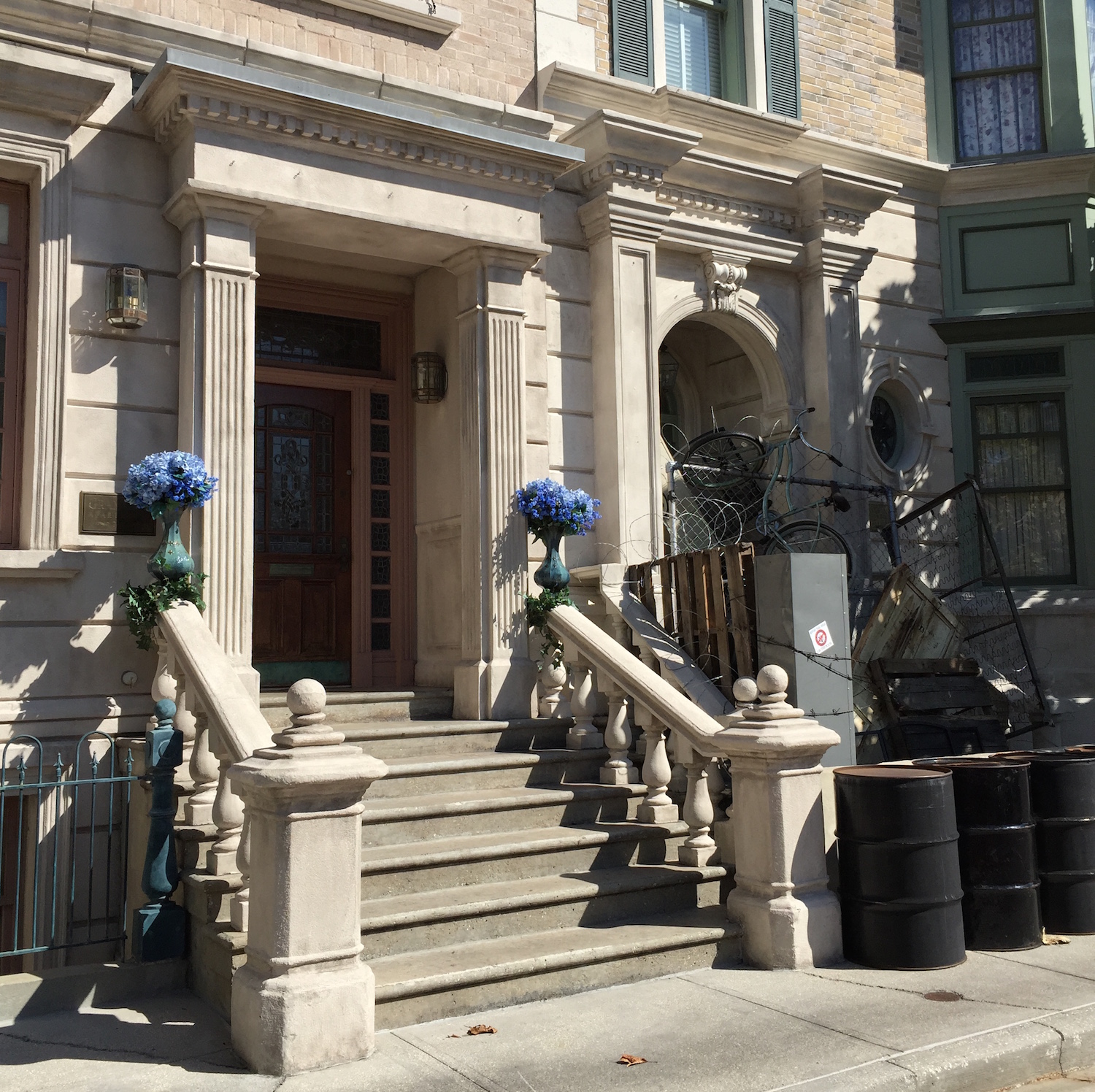 We noticed all of the above while touring the park during the day. At night, they bring out some extra props, like this sign. 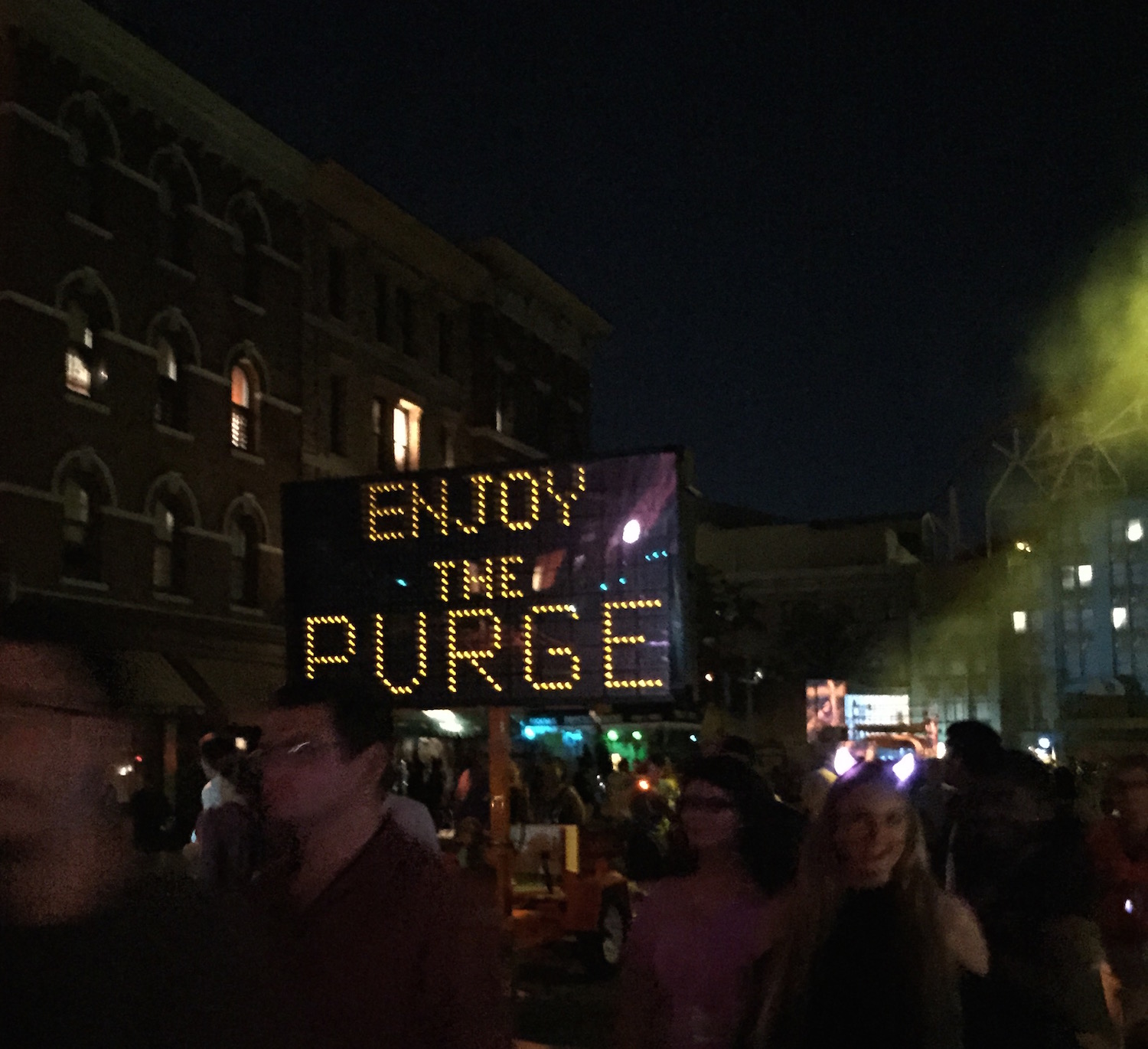 The other scare zone I enjoyed was based around the reality show Face Off. Some of the most famous make-ups they've had on the show were there. 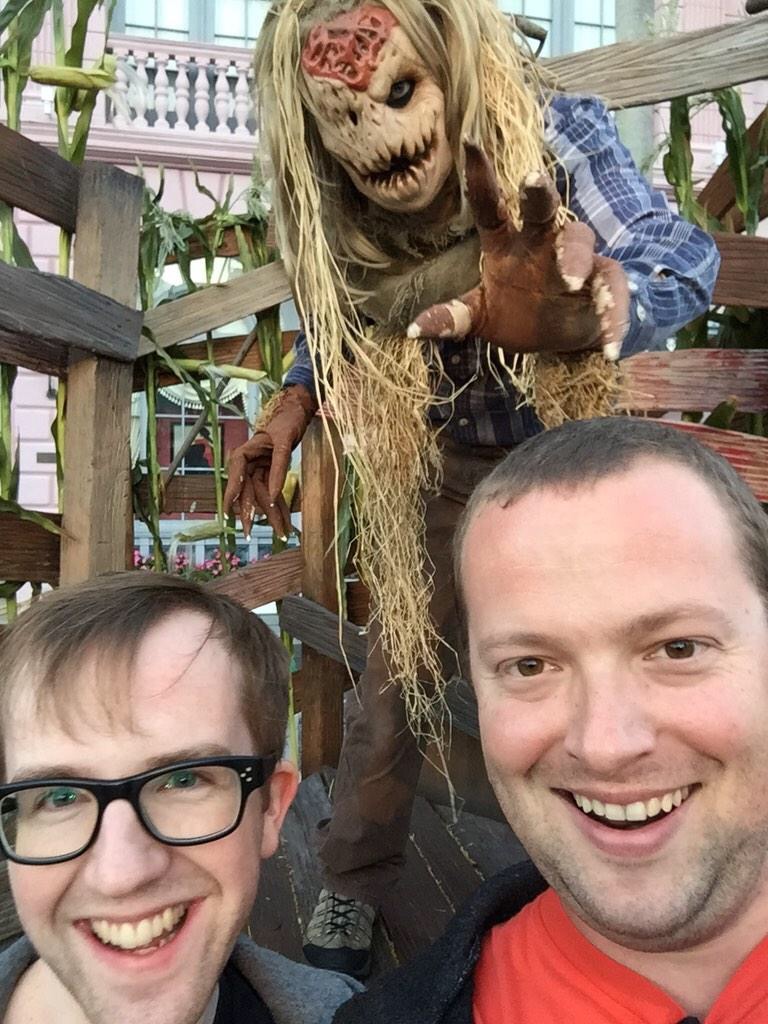 It was cool seeing them, but the scare zone just turned into a photo opportunity. We were guilty, too – we stood in front of the couple of make-ups we enjoyed from the series and took some photos. So not that scary, but fun nonetheless. 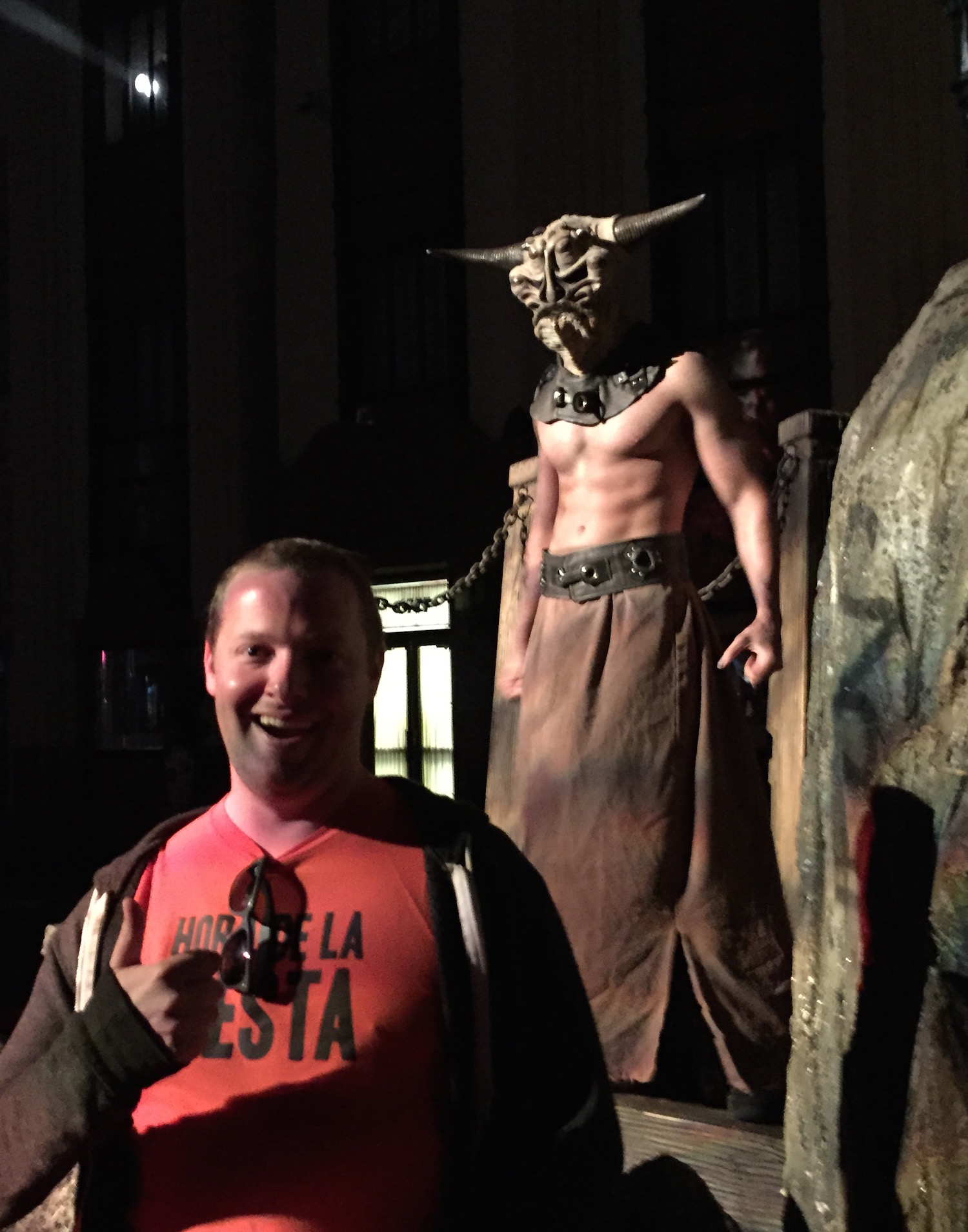 Halloween Horror Nights isn't that scary. We've found that smaller, local events are far scarier. Scare-actors at Universal Studios can't touch you. You move through the houses in a giant conga-line, rather than small groups.

With that said, Universal puts so much money into these houses that they're above and beyond anything you'll see at another horror event. The mazes are detailed and, for those based on films or TV shows, often amazingly accurate.