@Large is an art exhibition created by Ai Weiwei to be displayed specifically at Alcatraz. You don't need special tickets to view it – you just buy regular tickets to Alcatraz. The art is scattered across a number of buildings/areas of the island, so you can explore it while you're on the regular Alcatraz tour. 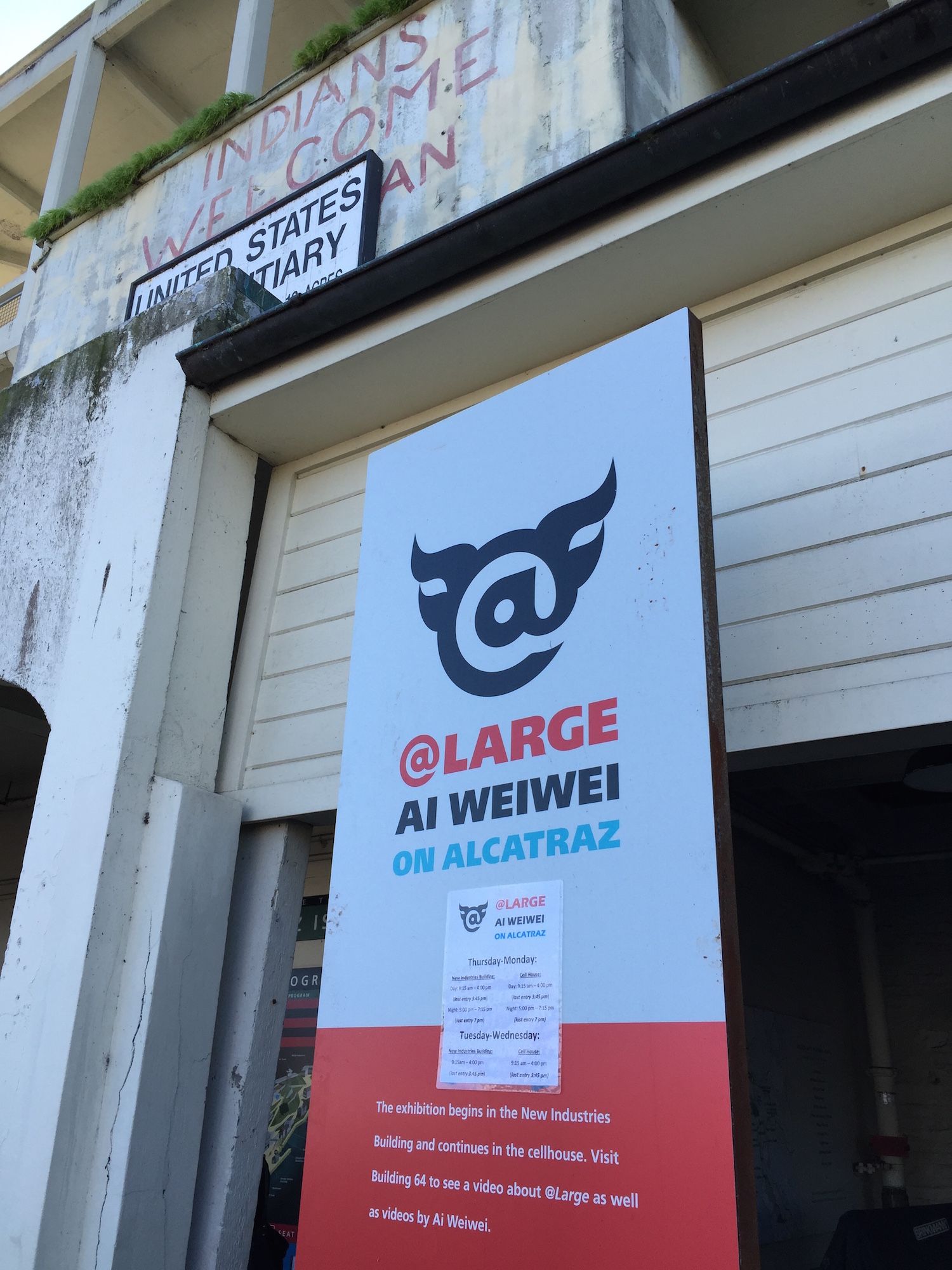 Poster at the Entrance

The exhibition includes an area I hadn't seen before – the New Industries Building. Last time I visited it was closed off, so it was nice to visit an extra area of the island.

Inside are three of the installations: With Wind, Trace, and Refraction. With Wind consists of traditional kite sculptures – one large dragon snaking through the room, plus a number of other smaller kites. 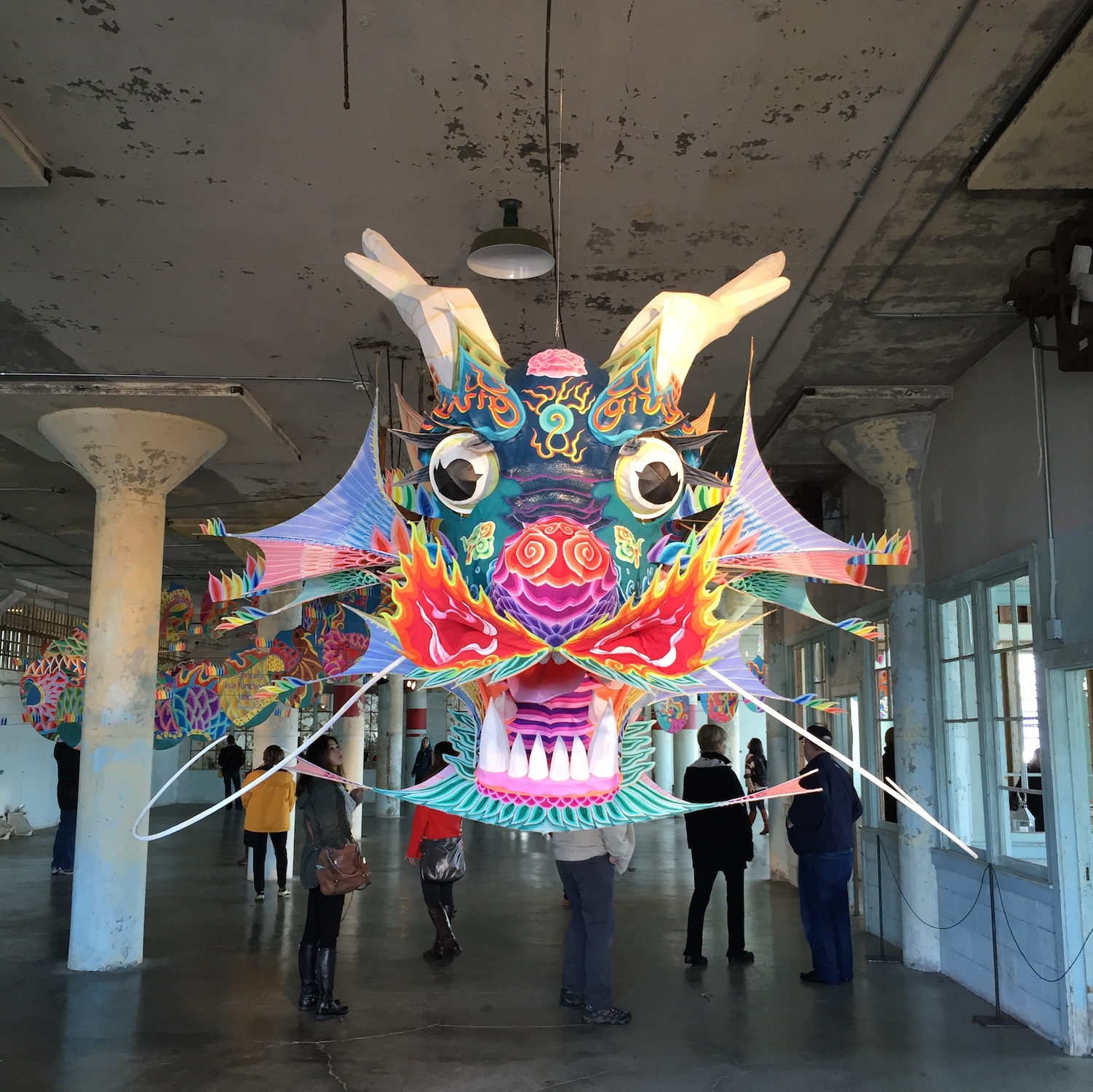 The dragon had "subversive" quotes written on it. The smaller kites were made of fabric printed with birds and animals from nations that have less-than-stellar human rights records. 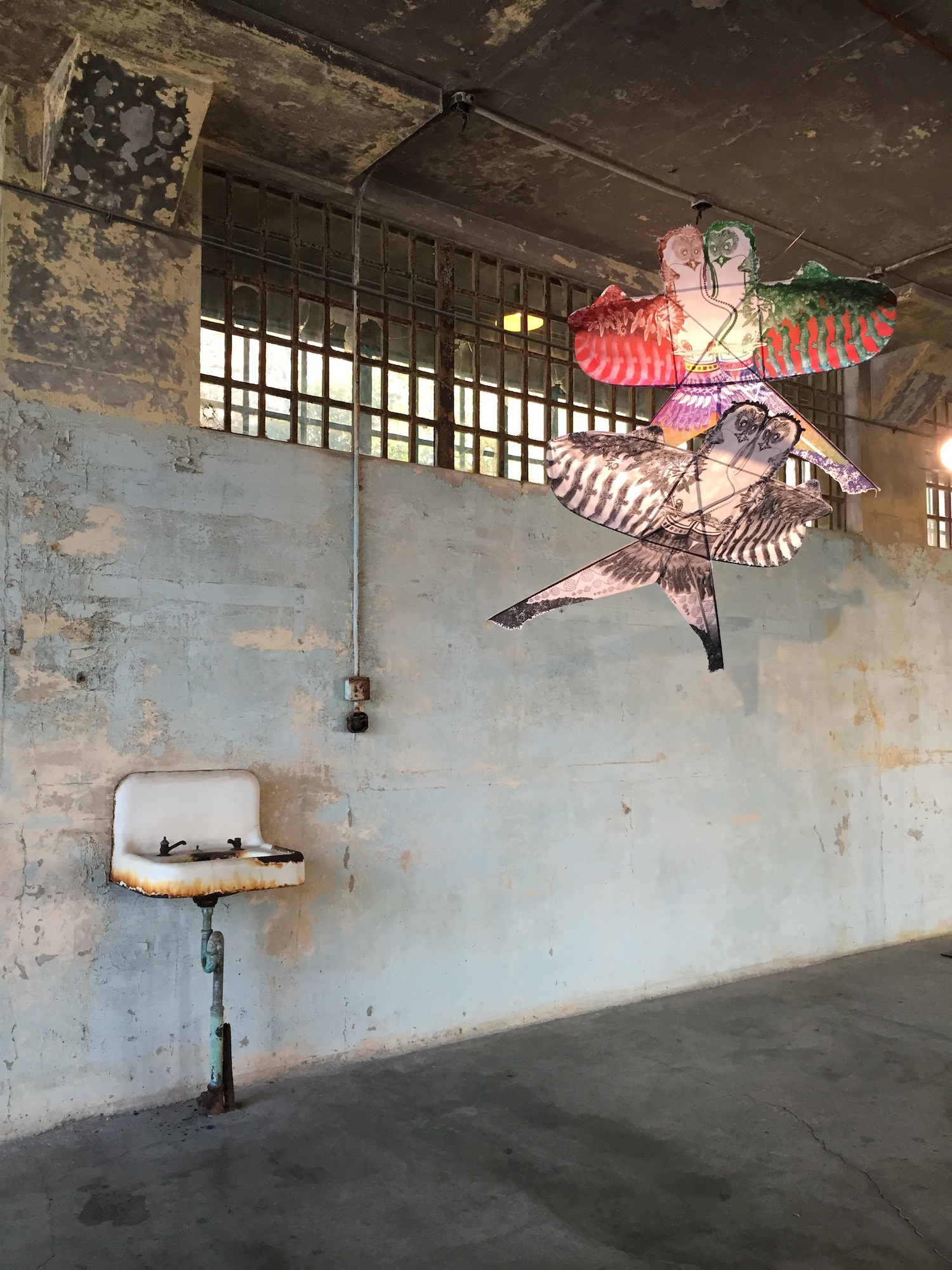 The fact that these kites – usually symbols of freedom, soaring across the sky – are cooped up in a factory building was jarring.

The next room contained Trace. A series of portraits of political prisoners made in Lego covered the floor. 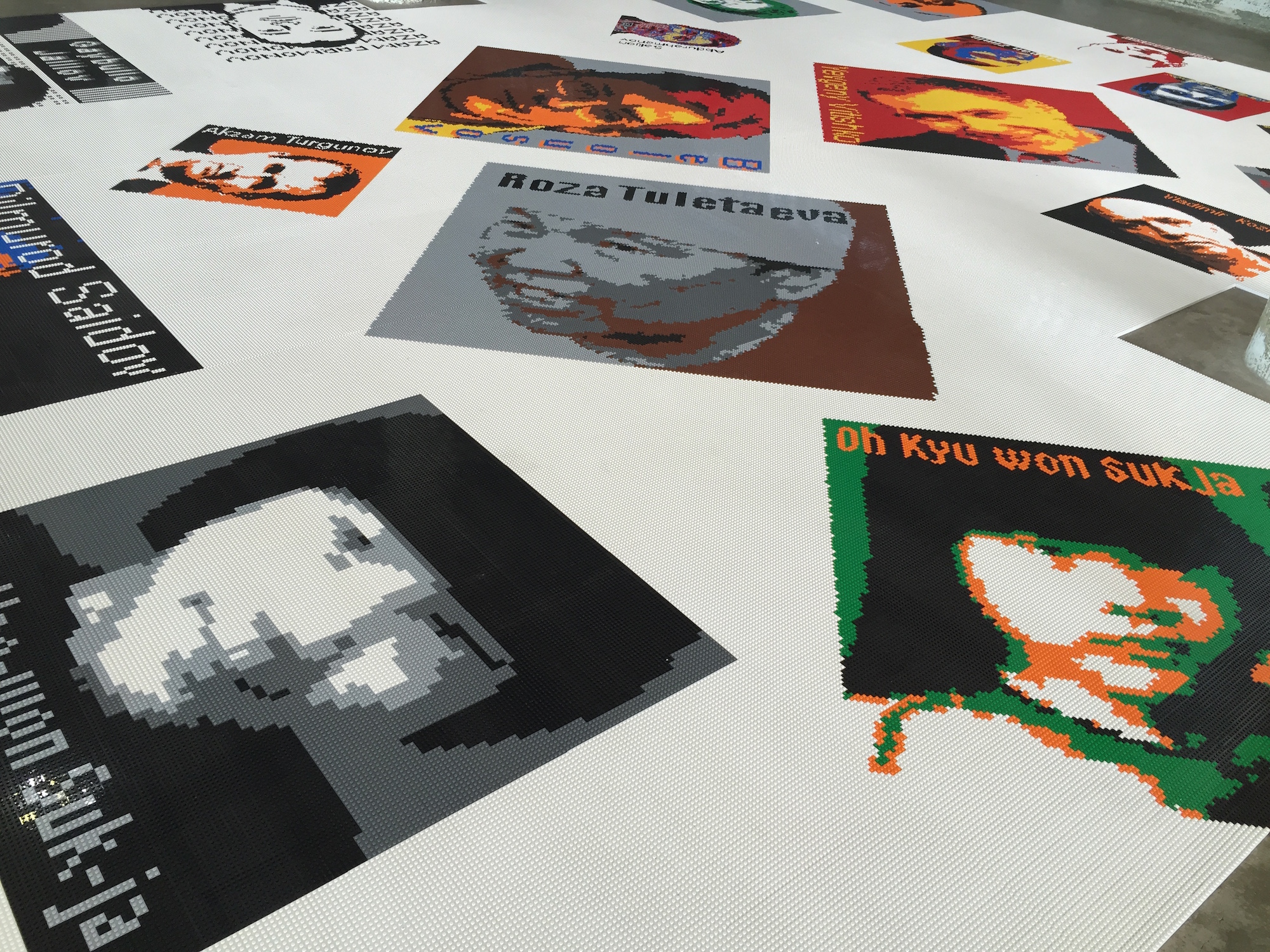 Along the side there were books explaining the portraits – who they were, where they were imprisoned, what they did to end up there. It was overwhelming, and a little difficult to connect with. The sheer number of prisoners – most of whom I'd (shamefully) never heard of – made it impossible to know everything about all of them.

Looking at a couple, though, is worthwhile. The most surprising for me was John Kiriakou, who was the first agent to relase the information that the CIA was using waterboarding to torture prisoners. He's currently serving jail time for this. You can see a list of the political prisoners featured in the artwork on the installation's website.

In the old dining room, there's another part of @Large – Yours Truly. Here you can write postcards to the prisoners depicted in Trace. The postcards are already addressed, and on the front have national plants or animals from the prisoner's home country. 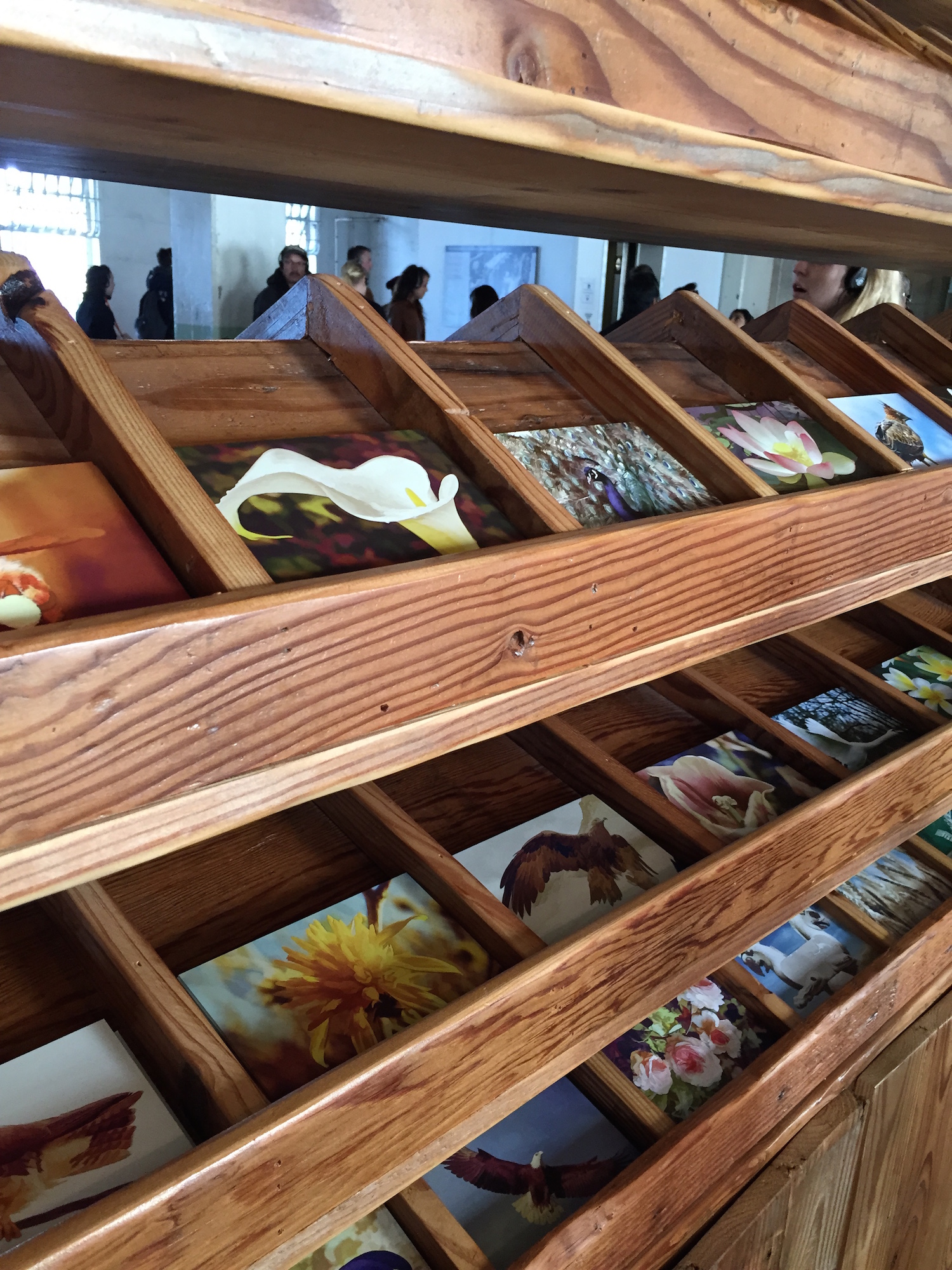 It's a nice idea to remind these prisoners that there are people still thinking of them. I certainly felt good about writing a postcard. Afterwards, though, I wondered if they would actually reach the prisoners. I don't mean to question the honesty of the volunteers who mail them – but I'm unsure as to whether the Bahrain government (or whereever) would allow their prisoners to get such a large amount of mail.

The hospital wing had an installation called Blossom. 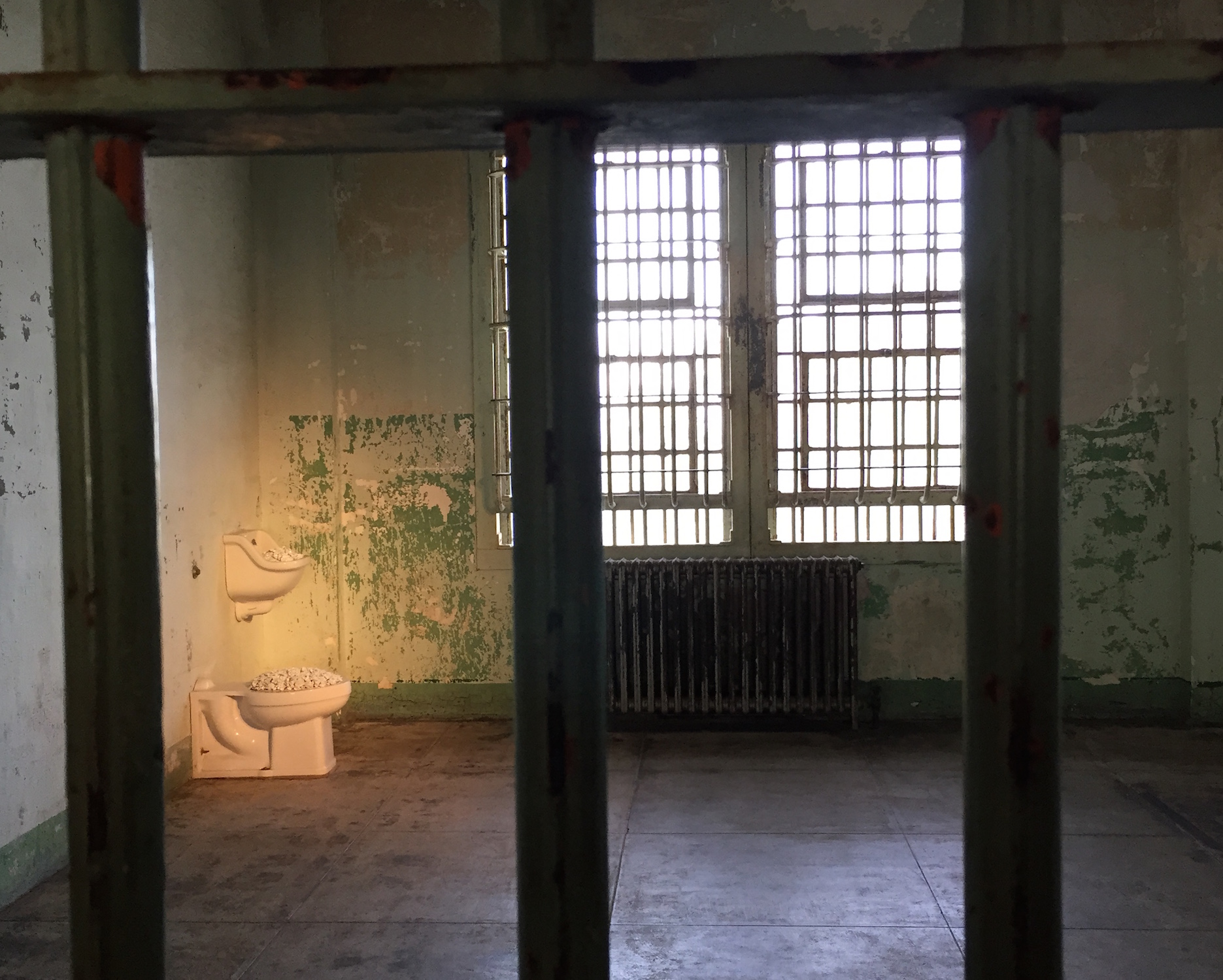 It consisted of beautiful and delicate porcelain flowers arranged in the toilets, bathtubs, and sinks of the wing. 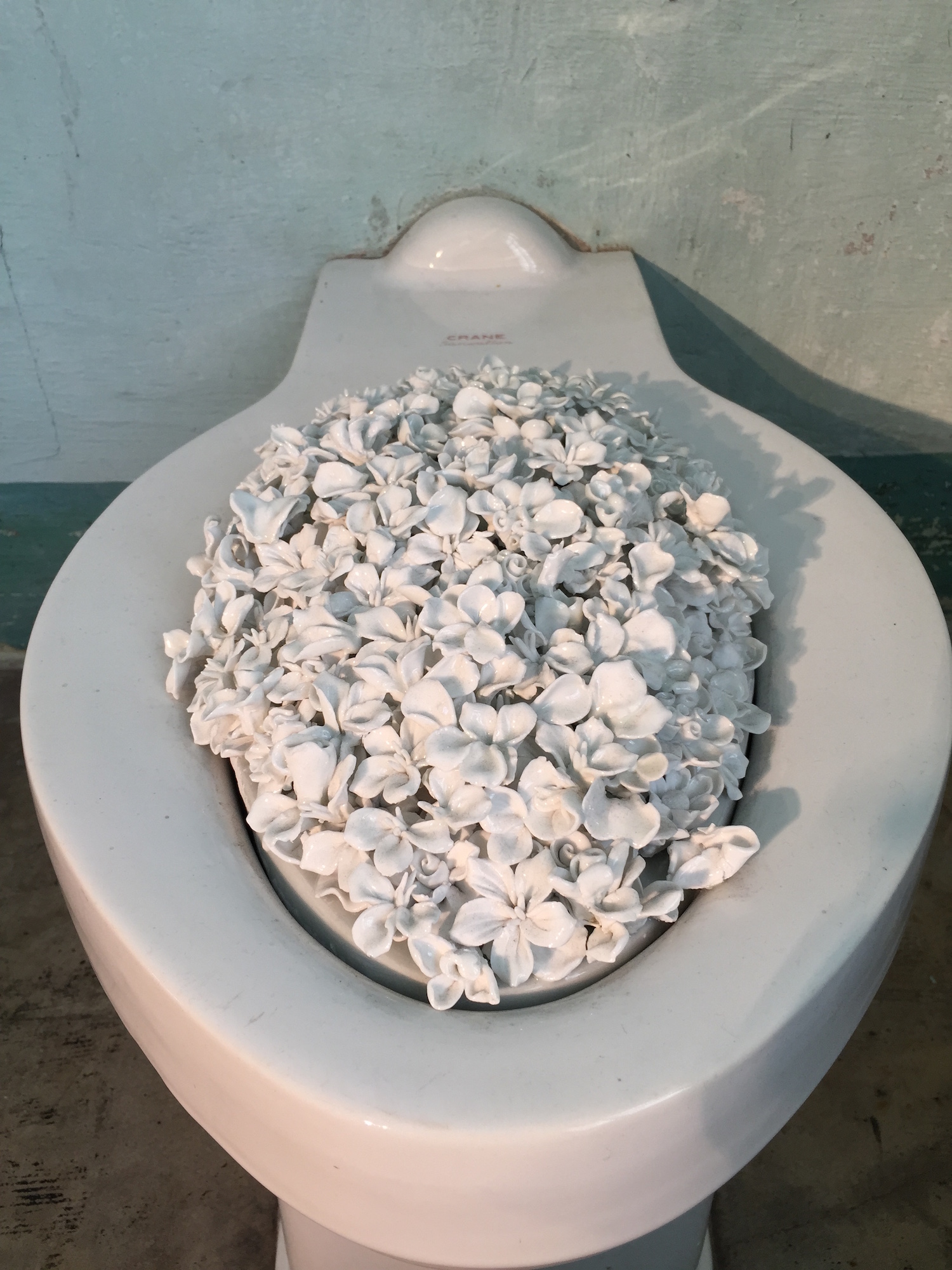 Also on the tour there were two sound installations. Illumination, in the psychiatric cells of the hospital, had Tibetan and Native American chants echoing around the tiled rooms.

Stay Tuned, in A Wing, opened up some cells for you to sit in. Music, poetry, or speeches from political prisoners was piped in through a tiny grate in the floor. Sitting on a stool, alone, listening to these songs gave me a strong feeling of shame. It was certainly the biggest emotional reaction I got from the exhibit.

Here I was, having paid to come here. I chose to sit in a jail cell and listen to music. I could get up and leave at any point I wanted. I was – dare I say it – having fun. It was a little perverse.

But maybe that's the point? It managed to open my eyes to a wider issue, and obviously one that Ai Weiwei is concerned about. I've researched more of the political prisoners since visiting the exhibit.

So, at least in that way, the exhibition is a great success.