Drinking at the Disneyland Resort

We were in the mountains above Los Angeles for MaxFunCon, a neat comedy/podcasting conference at which we had a lot of fun. Since we were in L.A., why not head to the Disneyland Resort in Anaheim, too?

It's Disneyland's 60th anniversary, so there's a lot of cool stuff going on. In particular, the fireworks at Disneyland are spectacular. If you can make it before the celebrations are over, it's well worth it. Make sure to get a prime spot on Main Street and you won't be disappointed.

Anyway, the rides and all that are fun, but a more pressing question is: are those of us who like cocktails doomed to saccharine cruise-ship drinks while at the parks?

We set off to find out.

The first point: of the two parks in the Disneyland Resort, Disneyland is completely dry (well, apart from Club 33). The only park you'll find a drink in is Disney California Adventure.

That's where we started our investigatory stroll. Our first stop was the Alfresco Tasting Terrace. We'd been there on a previous trip, but since then they had stopped serving cocktails. There's only wine and beer now. 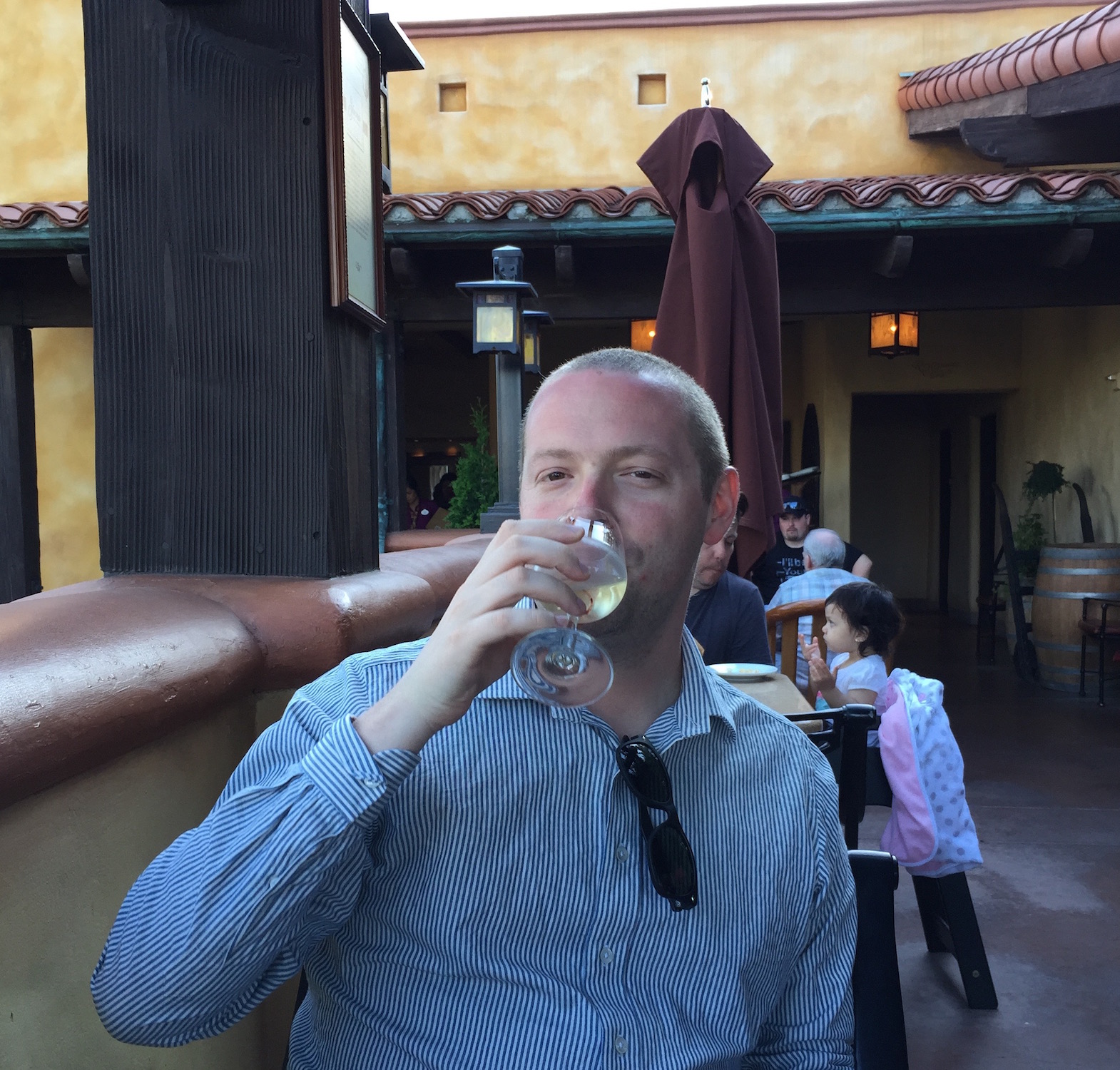 They have wine flights, which are pretty fun. And all the wineries seem to have some connection to Disney – some ex-executive started a winery, and now you can drink it here.

It's also a pretty good spot to grab a glass of wine to go. This is especially handy before the World of Color show. Seen below is us with our to-go cups of wine. 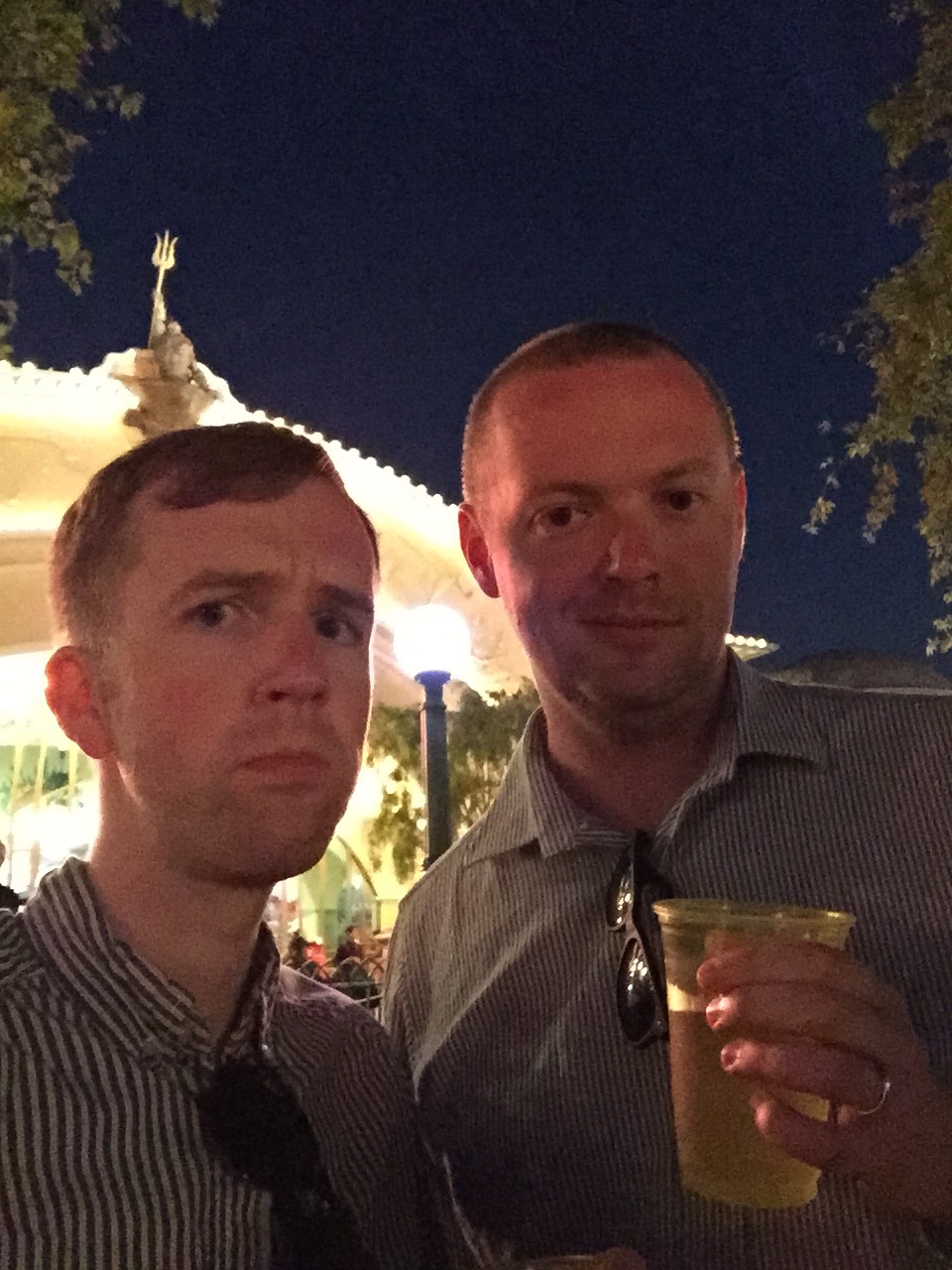 Booze you can take with you = the best

Our next stop was more fruitful: the Carthay Circle lounge. It gets busy after around 5pm, and the lounge is first-come-first-served, so make sure you get a seat. The drinks were good, and decently priced ($10-12 each). Because of the Disneyland 60th anniversary, they're putting diamond-shaped cubes in every drink (including Martinis and Manhattans), so if you want your drink unsullied, make sure to mention it. 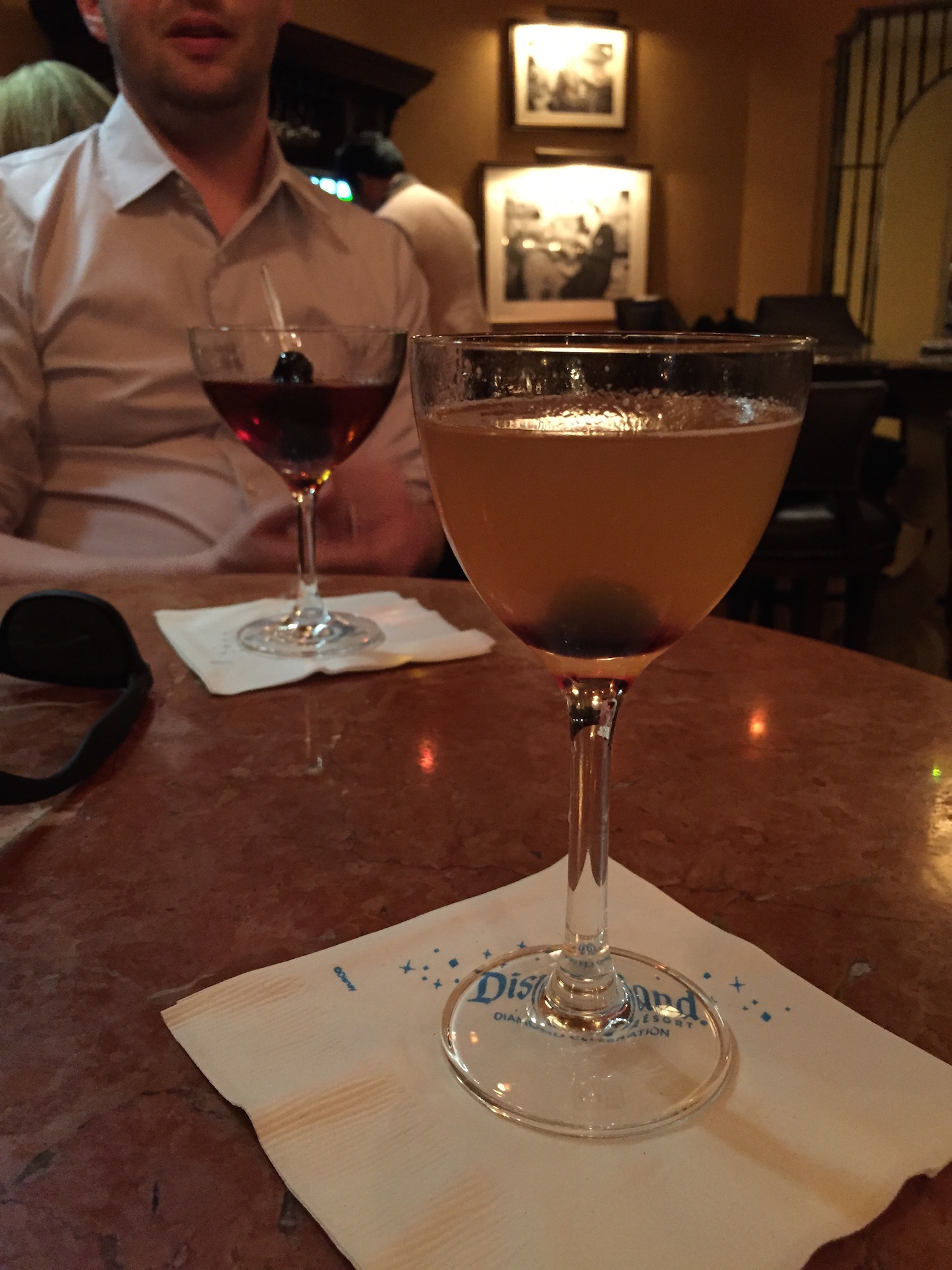 They didn't just have standard cocktails, either. They had some crème de violette/tequila thing that came with a candied flower on it. It tasted great! 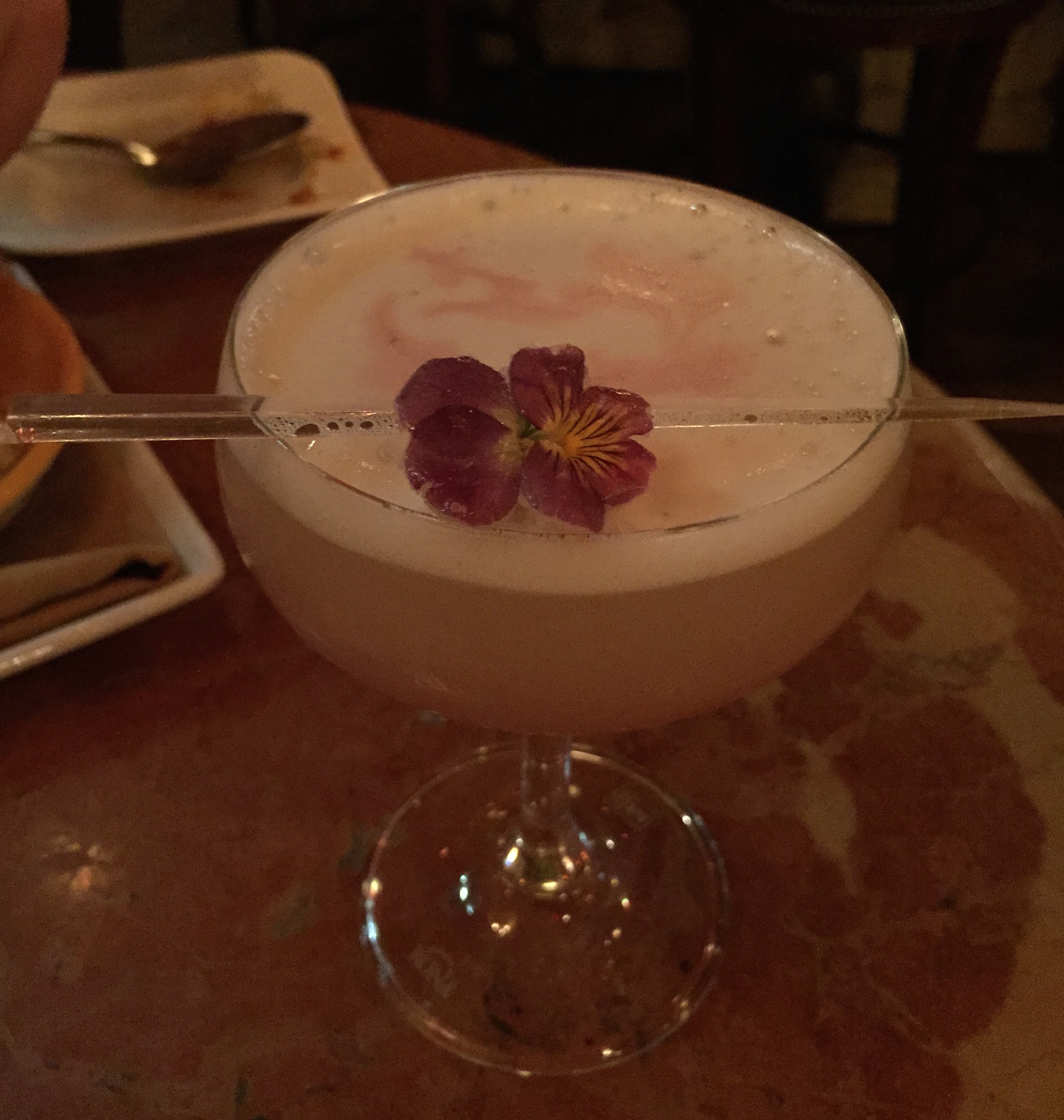 We headed over to The Cove, which is by the Paradise Pier area of the park. Like the Carthay Circle lounge, this place gets really busy, so come early. It's a lot of fun people-watching and sitting outside (if you can take a little sun). I was pleasantly surprised that the discontinued cocktail menu from the Alfresco Terrace was now over here! So I had my favourite drink from that – the Smoked Turkey. 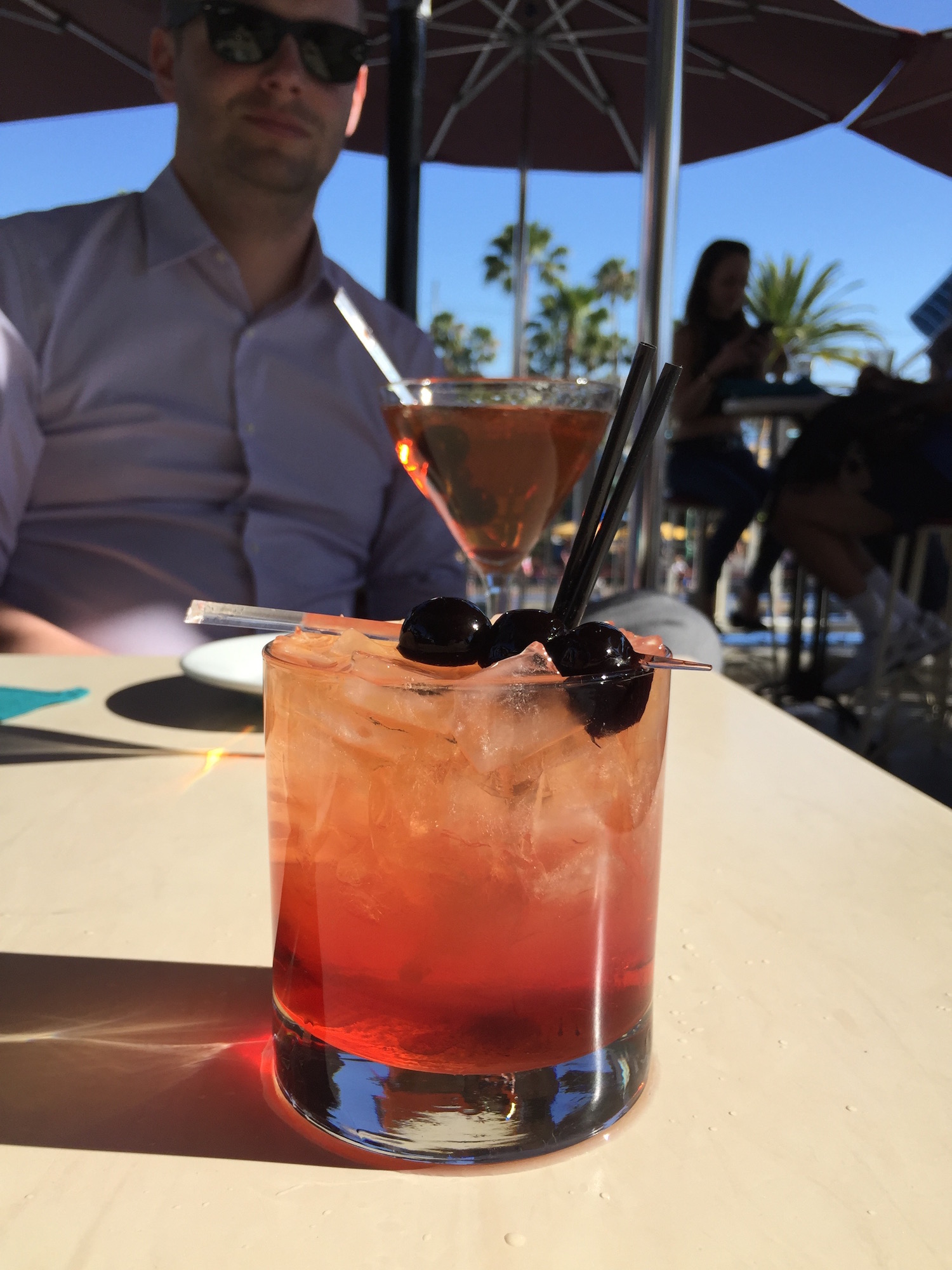 The Cove bar – Smoked Turkey and a Manhattan

(Oh, you should also get the lobster nachos while you're there. Deeeelicious.)

After we'd exhausted Disney California Adventure, we went to our favourite bar at the resort – Trader Sam's Enchanted Tiki Bar. It's located by the pool at the Disneyland Hotel. It's a bit of a trek from the parks (about 10-15mins walk through Downtown Disney), but we enjoy it. Here's the entrance: 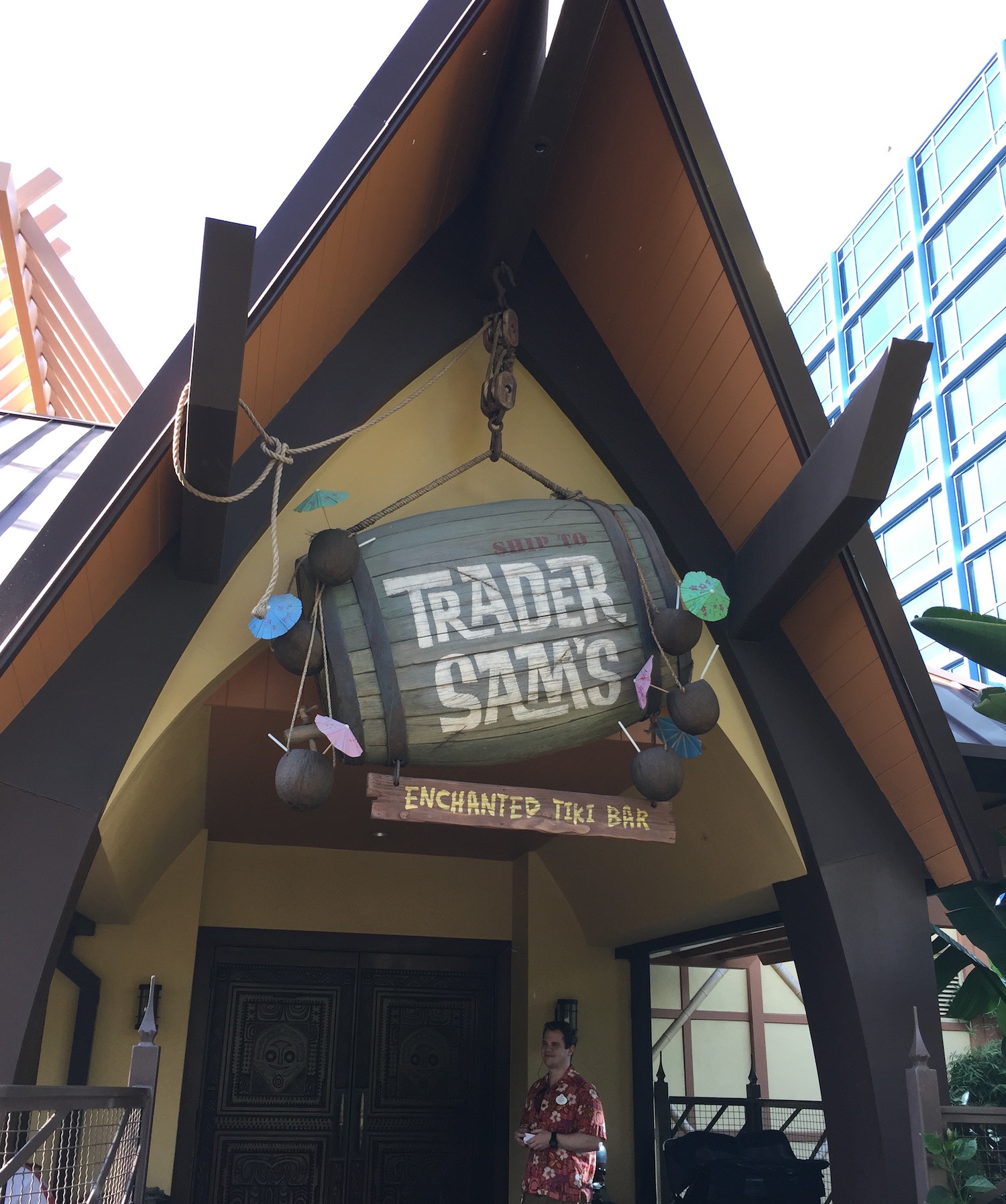 There's a doorman – like every other bar, this one gets really busy. The doorman had implemented a one-in-one-out policy.

Inside, it's filled with trinkets and tchotchkes over the walls. Every surface is covered in this stuff, and it's really interesting to read/look at. Like everything at Disney theme parks, there's a back-story to every item. Nothing is just put up without thorough thought. There are letters from people Trader Sam has met on adventures. There's things people have mailed. It's quite incredible. 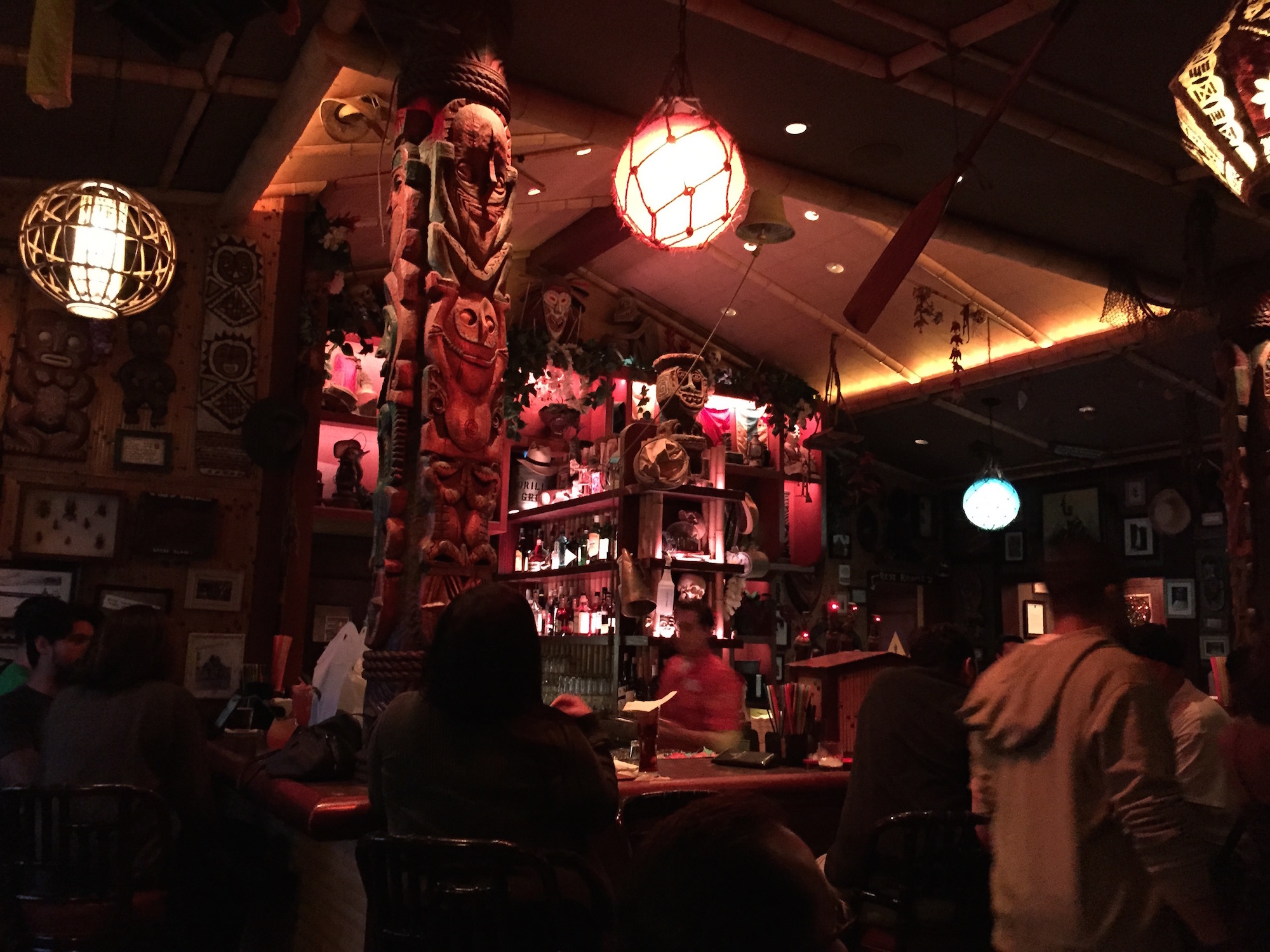 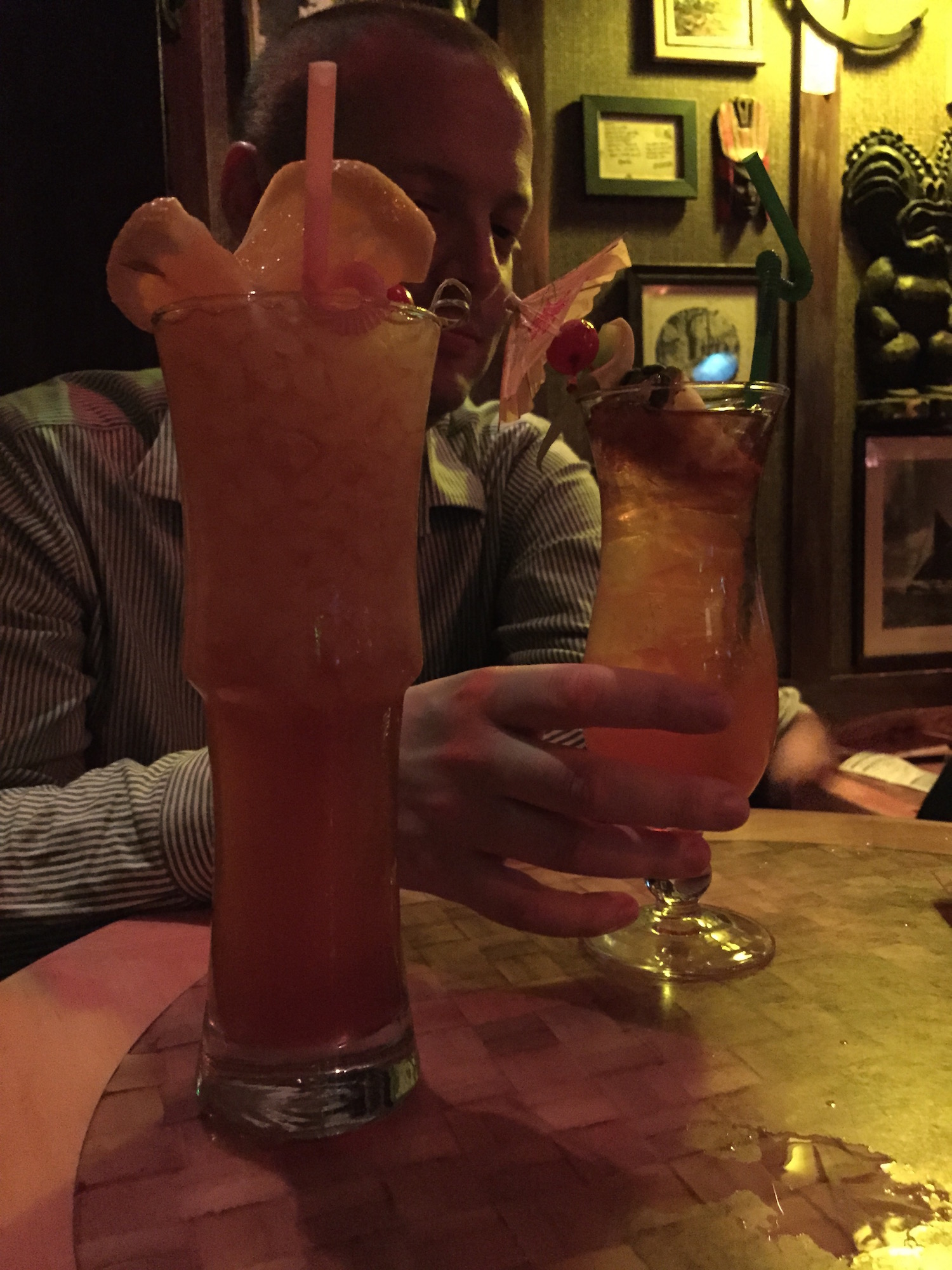 HippopotoMai-Tai and a Lost Safari

The Mai Tai was fine, but nothing special. The Lost Safari was really good, though.

For our next round, I ordered the Krakatoa Punch. It came with a glowing "ice-cube" in it. When I ordered it, the bar lights went low. Through one of the trompe l'oiel "windows", a volcano erupted in a neat little display. 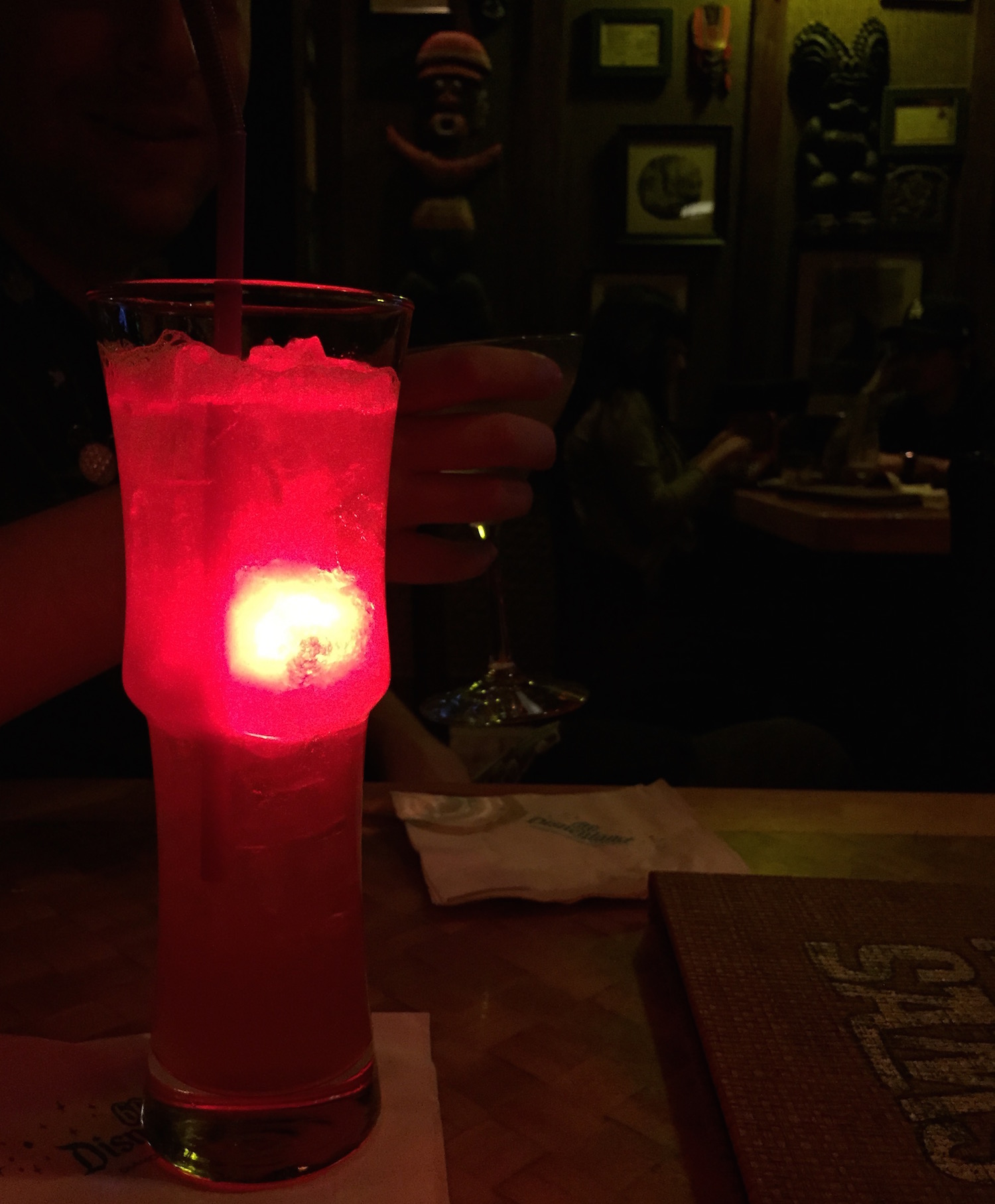 In fact, these things happen for a number of drinks. Every 15 minutes or so, you'll be interrupted. The Shipwrek on the Rocks causes a ship in a painting behind the bar to sink. Plus the bartender sprays you with water.

Our final drink was the Uh Oa. It's a sharing drink, and arrives with a flaming sugar cube. You throw cinnamon and nutmeg onto the flames, creating sparks, while the whole bar erupts in chants of "Uh oa! Uh oa!" 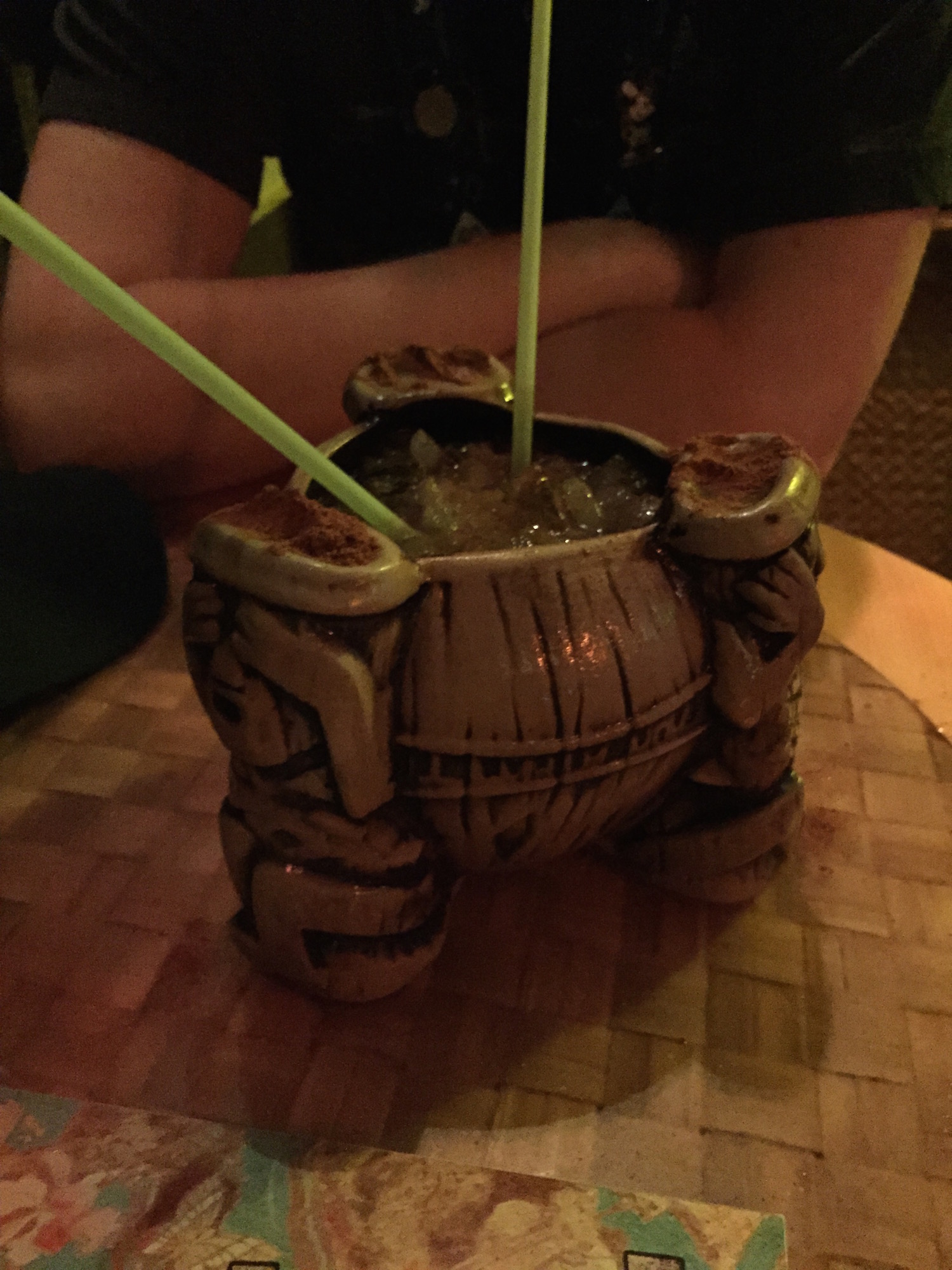 Trader Sam's is entertaining. It's exactly how you'd imagine Disney would want a bar to be – adults can get the sense of fun and magic that is often left only to kids.

That was our drinking experience at Disneyland Resort. When we're next down at Walt Disney World, I'll try to do a similar thing for those parks, too.