We landed late on a Thursday, and managed to catch the Keisei Skyliner to our first hotel. We were staying in Akihabara, the electronics district. It was overwhelming when we first arrived. 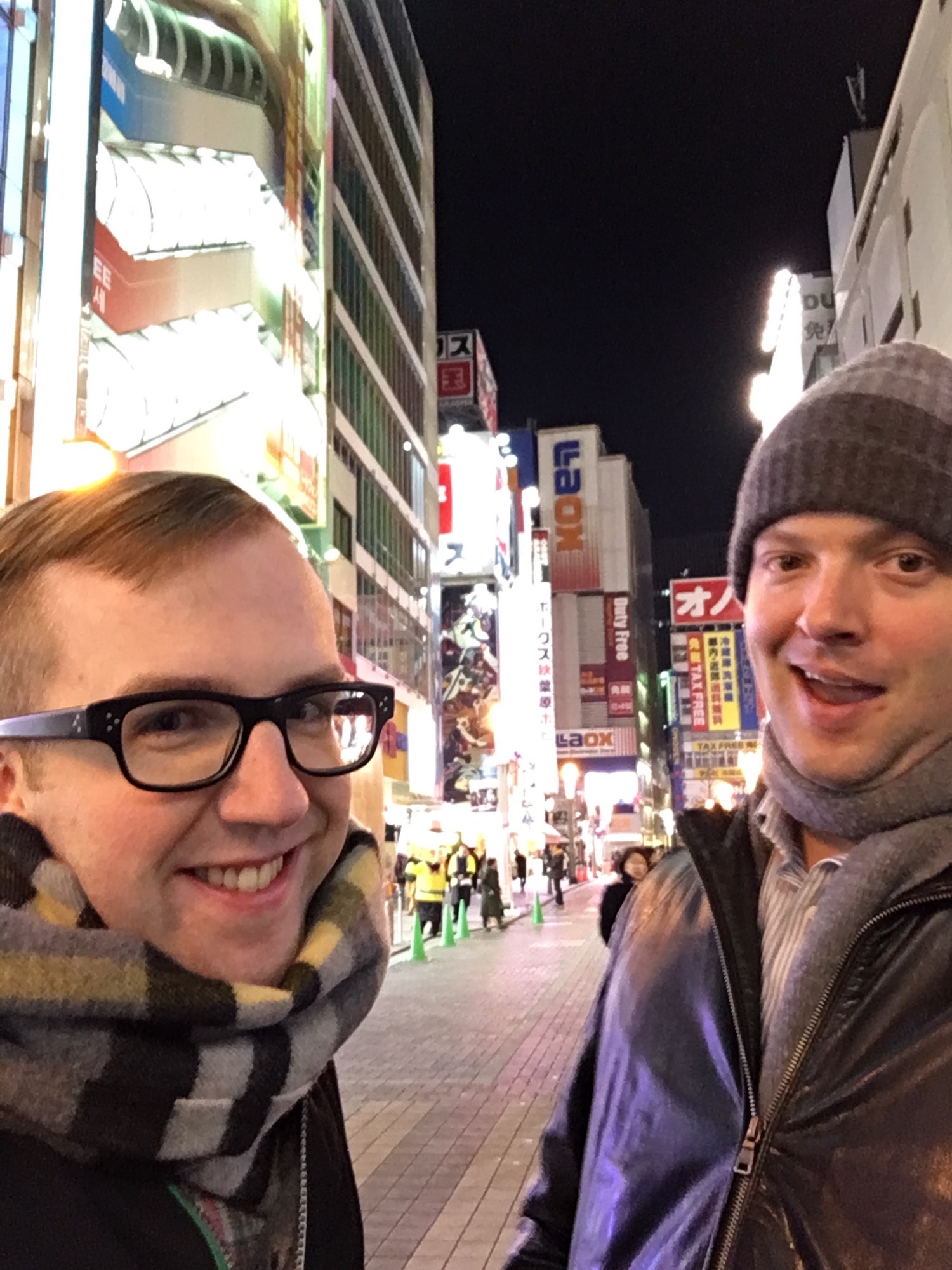 I had an idea of what Tokyo would be like, and this was it turned up to 11. Neon signs were attached to every building. Video screens were selling you products or pop bands. People were shouting on the street for you to come into their bar/arcade/store. It was a sensory overload&emdashnot helped by just having taken a 10 hour flight on which I didn't sleep. We went to bed pretty soon after arriving.

The next day, we headed over to Tsukiji fish market. It's a slightly cliché first-day-in-Tokyo thing to do, but it's apparently being moved to somewhere else in the Autumn, so we wanted to do it at least once. It's a labyrinth of small restaurants, fishmongers, and other shops selling knives/chopsticks/etc. 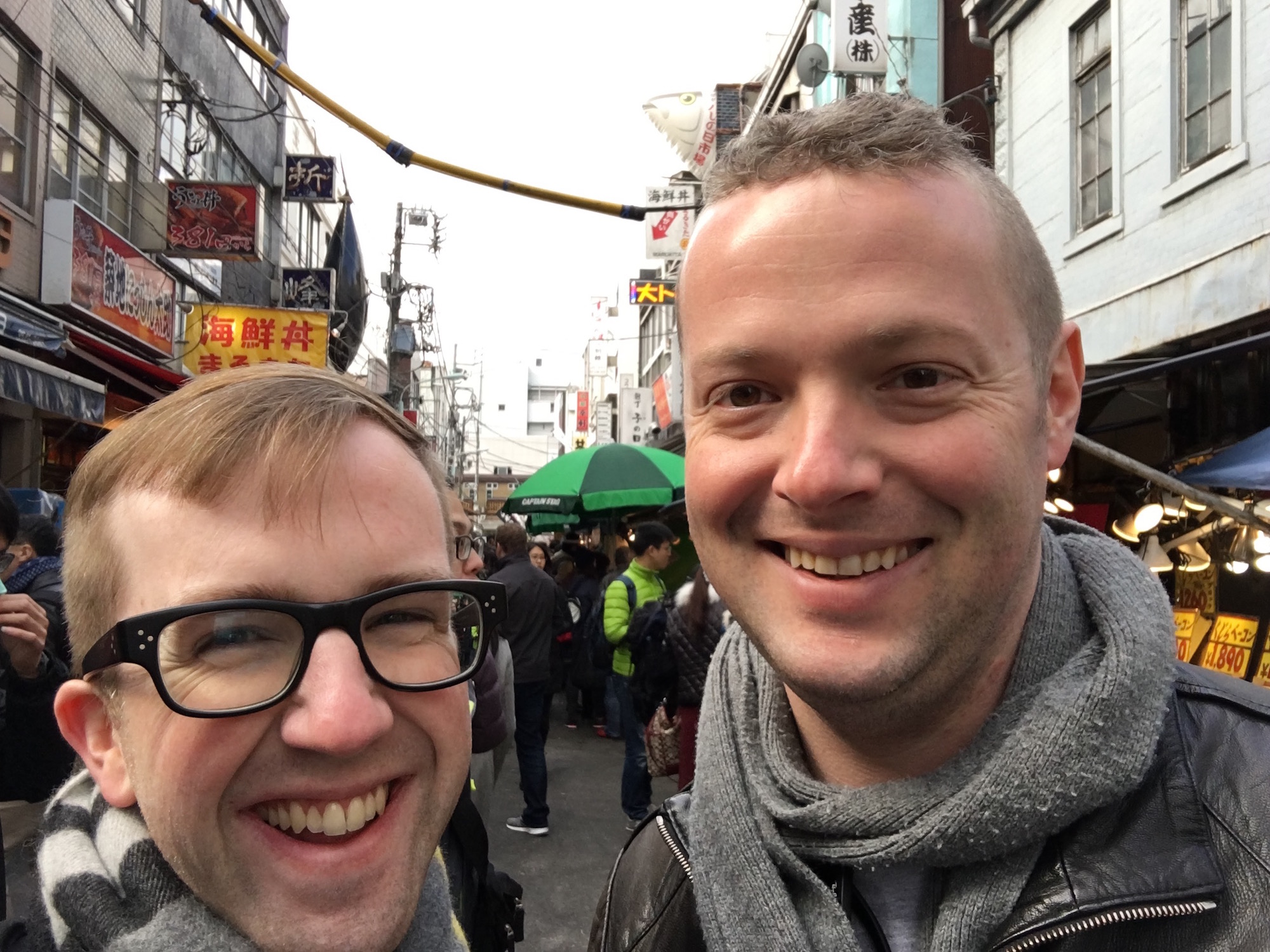 In the narrow streets of Tsukiji

But the best part is the cheap, amazing fresh sushi you get find in the area. We picked a place at random, opting for a sushi bar that looked reasonably packed but without too much of a wait.

I'm not going to try to describe the ensuing bounty. The fish was cold and tender, the rice warm and sticky. It was probably the best sushi I'd ever had (until a couple of days later, but that's for a different post).

Just looking at this makes me want to eat it again. The best piece was the fatty tuna, on the top-left of the board. Delicious.

After the market, we headed over to Ueno Park, an urban park with a number of shrines and museums. Unfortunately, the National Museum of Western Art was closed, so we ended up going to the Tokyo National Museum instead. 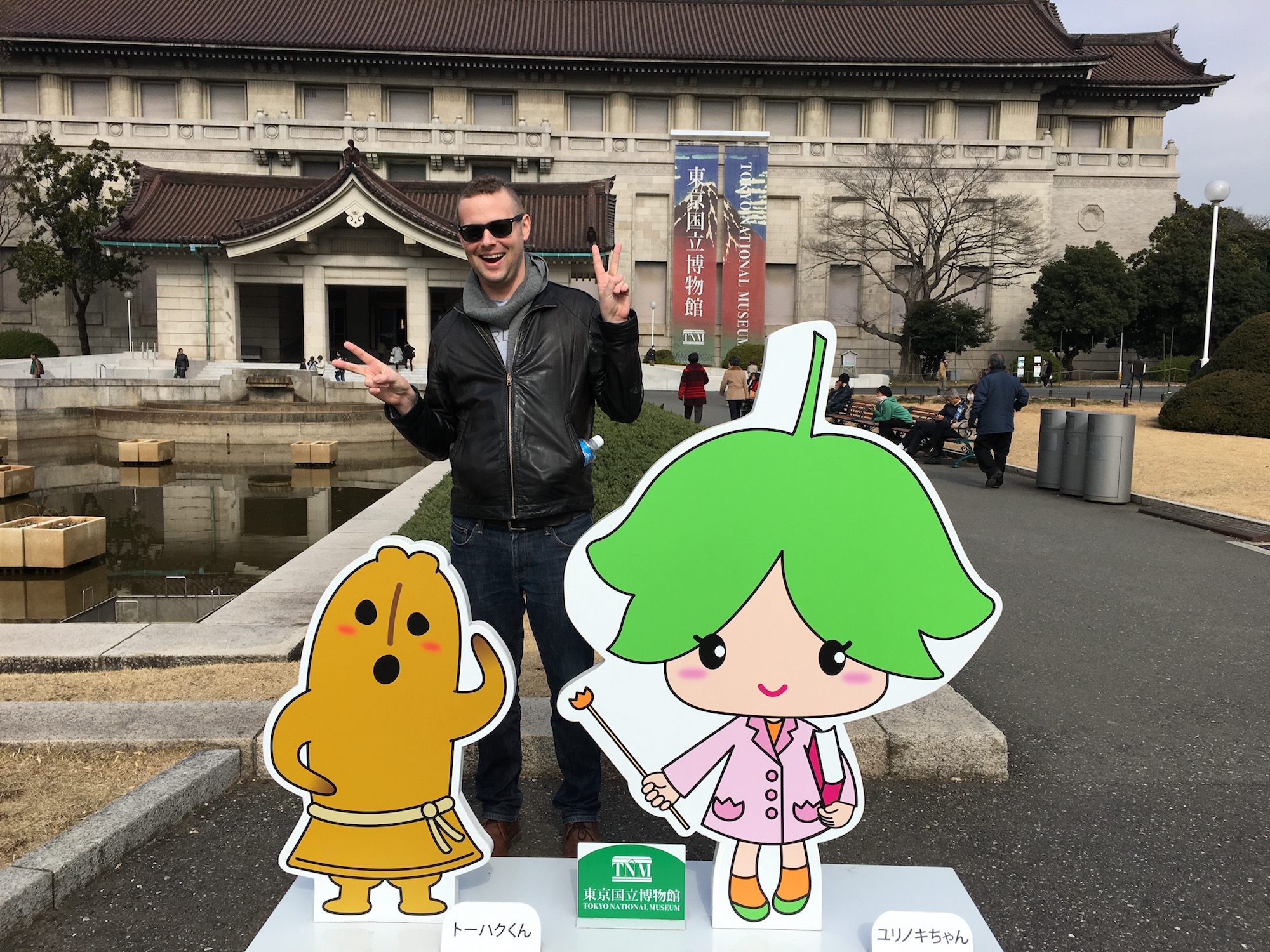 Hanging out with the TNM mascots

It provided a nice overview, for ignorant people such as myself, to the broad history of Tokyo (and, to some extent, Japan). There was also a special exhibition on&emdashsome of the Terracotta Army were on display. So we spent a little more and got entrance to that, too. 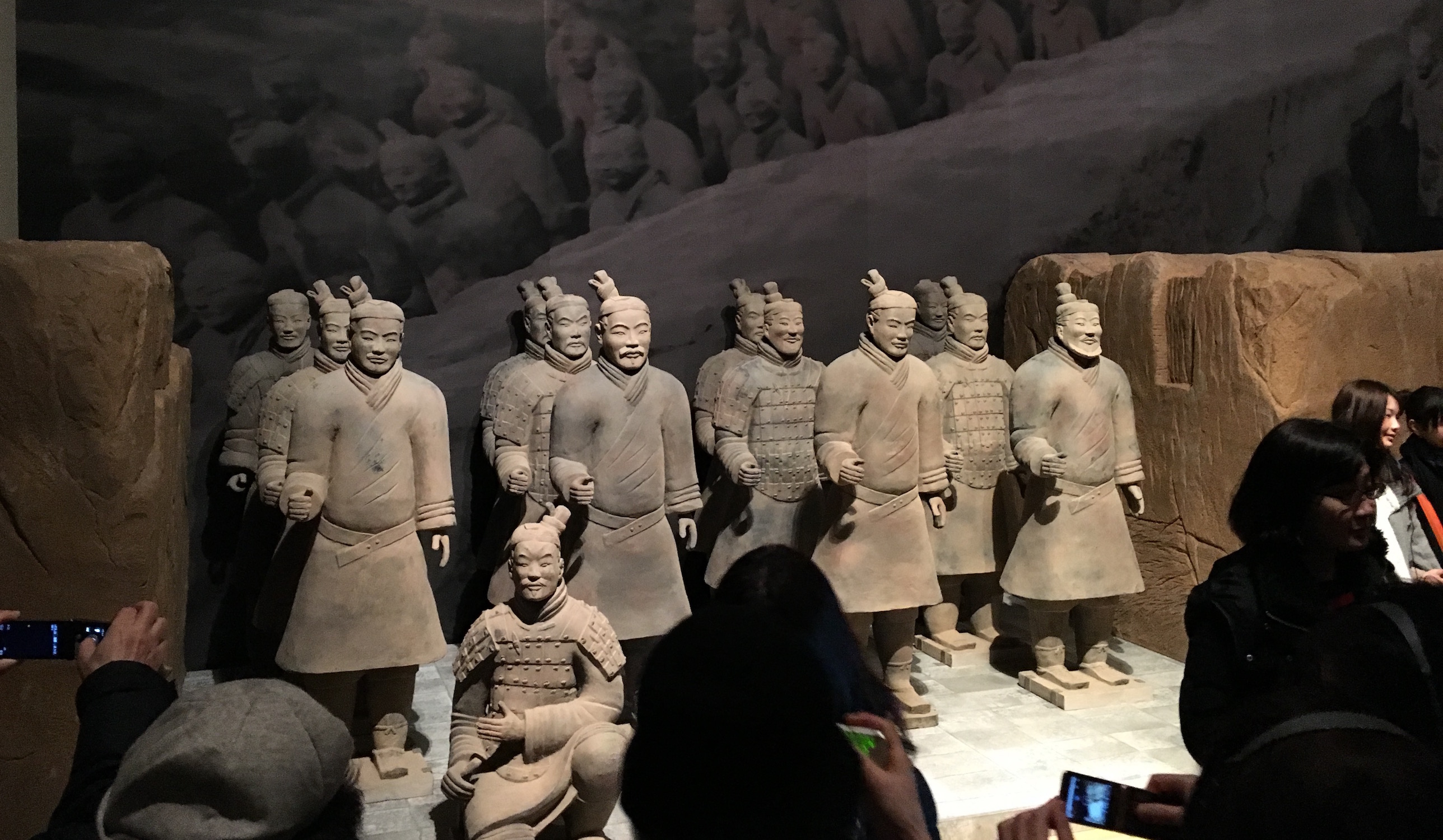 Some (fake) terracotta warriors... we weren't allowed to take pictures of the real ones

They were fairly impressive, I suppose, but the exhibition was in its last few days so it was packed. You could barely move in there. But I guess I can check it off the bucket list?

Anyway, we went back to the hotel to relax before heading out for dinner. This was our first major meal in Tokyo, and introduced us to one of the jarring ways to deal with such density of people. In most cities I've been to, restaurants (and bars) have a street-level entrance. Not here. Restaurants are found on seemingly any floor of a building. In this case, we went for yakiniku on the fourth floor of a building. (So, I should note, it's important to figure out what floor a restaurant is on when you look up an address.)

Yakiniku is basically grilled stuff. And we grilled a whole bunch-o-meat on our very own grill. 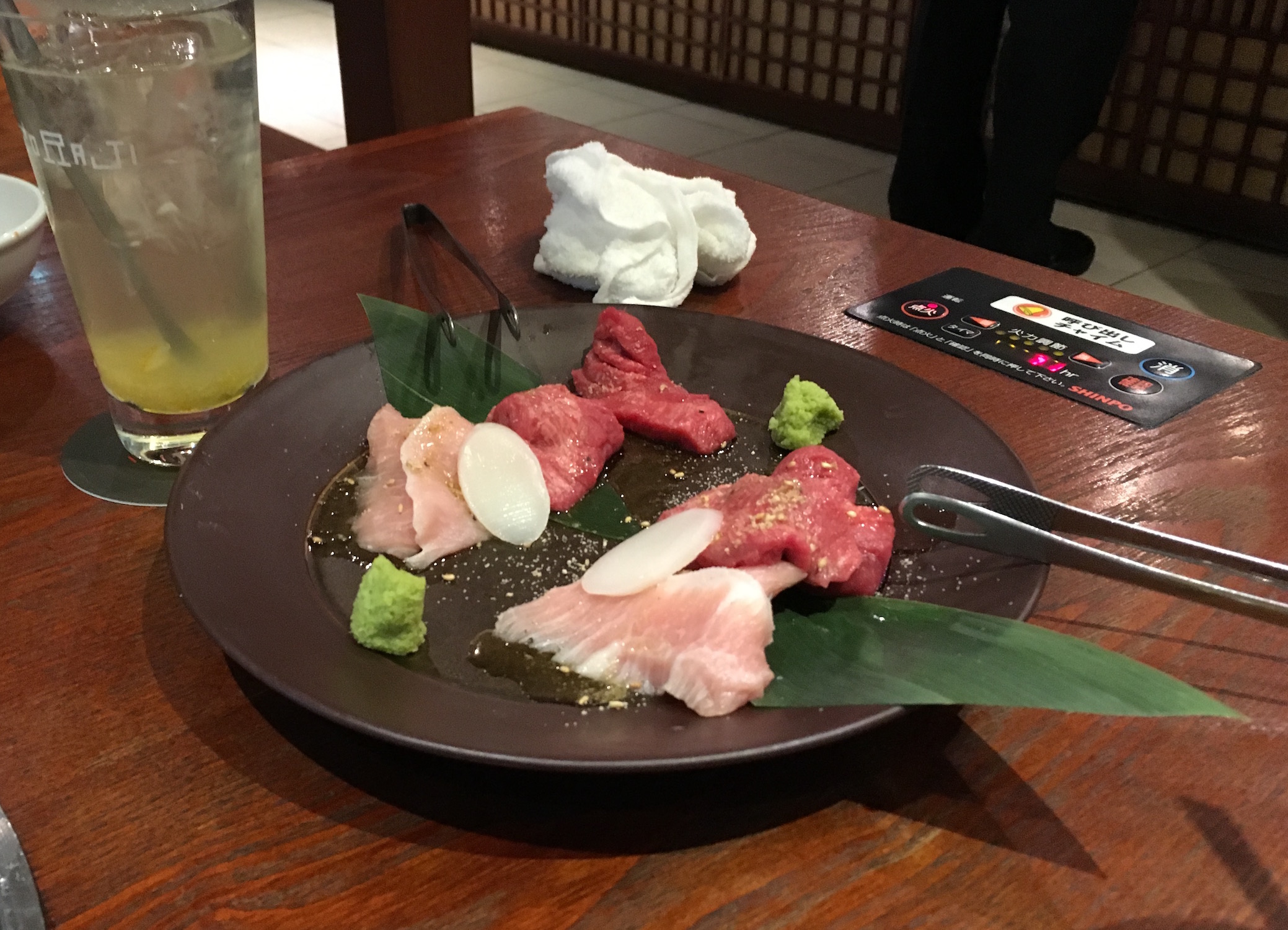 Weird cultural thing I didn't know before going to Japan: smoking indoors is pretty much A-OK, even in restaurants. It was odd being in a kinda-fancy restaurant and having the table next to us start blowing smoke in our direction. Boo.

Afterwards, we went "next door" (read: across the floor) to a British-style pub. It's part of a chain called the HUB. It was pretty fun, but it was odd because inside was smoking only... so we sat outside, right near the elevator. Odd times.

Chilling in a building's elevator lobby

The next day, Mike and Melissa arrived! But more about that in my next post.