After our day of exploring by ourselves, Mike and Melissa showed up to help us navigate all the cool things to do. It's incredibly useful visiting with people who've been to Japan a lot – explaining all the customs and phrases, knowing which areas to go to, and so on.

The first thing we did was go to Disney, but I'm going to put all the Disney stuff in one post. But later that evening, we went to what became Hampton and my favourite chain of izakaya: Torikizoku. They're dotted around Tokyo and you can easily spot their distinctive yellow-and-red seal script logo. The best thing about them? All menu items are 280¥ (~$2.60). Even drinks! It's nice knowing you can eat your fill of delicious yakitori for under $20. That was a great thing about Japan – you can get really good food for really cheap.

A selection of our food at Torikizoku

We then went wandering through Shibuya, and Hampton stumbled upon this guy selling street oysters.

Hampton loves oysters, so we had to stop. I'm usually extremely cautious of street meat, and street seafood is even sketchier, but this guy had a crowd of people eating his oysters – so we had one. It was good and we didn't die of food poisoning, so that's a win.

Next we went to a place where you ordered on a tablet: 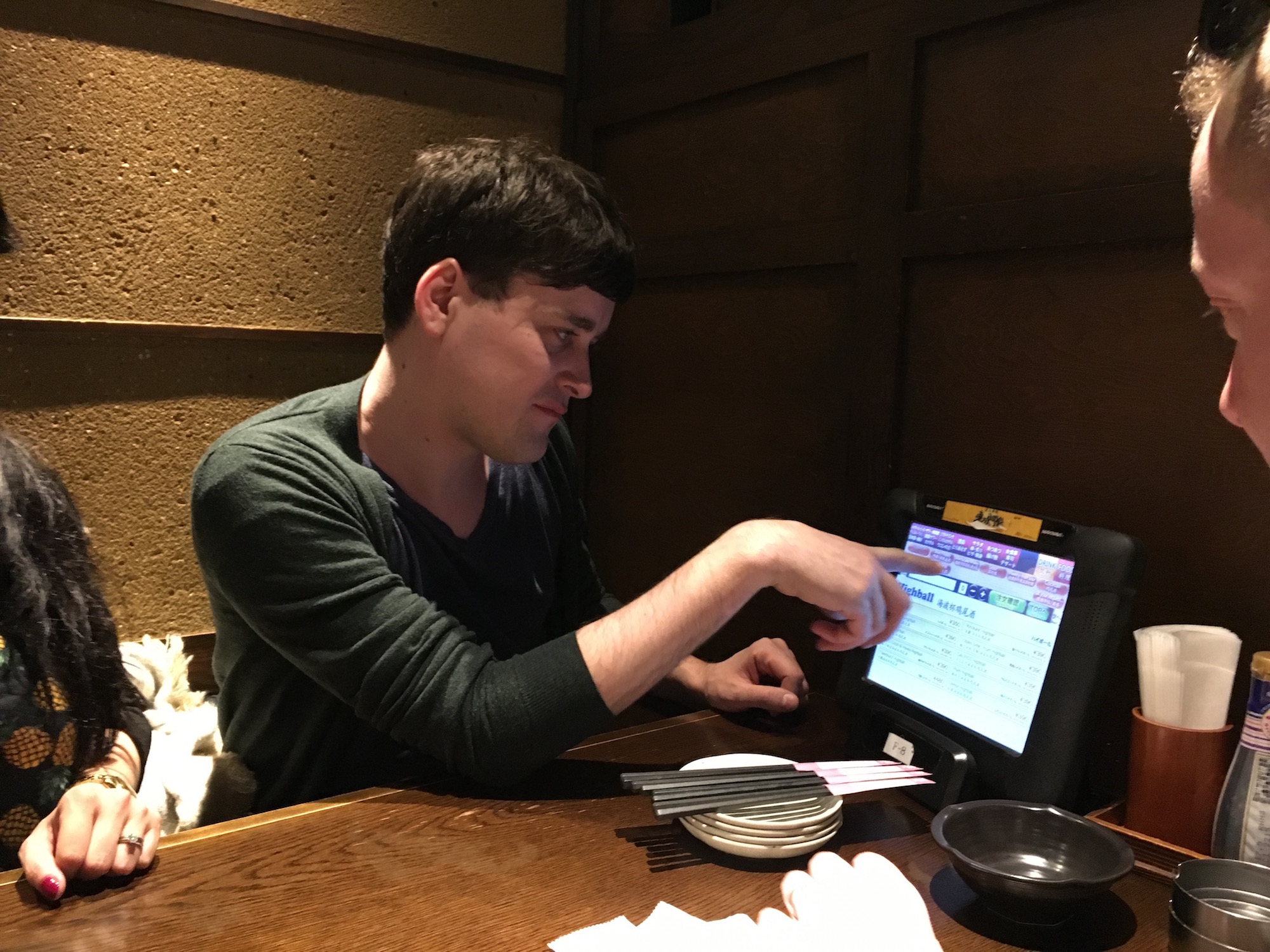 It was awesome except for the dangerously drunk group behind us. I was very worried someone was going to fall into me, but they didn't.

Then we spent the rest of the night playing games in an arcade. These arcades are everywhere and usually involve a mix of computer games and UFO catchers. 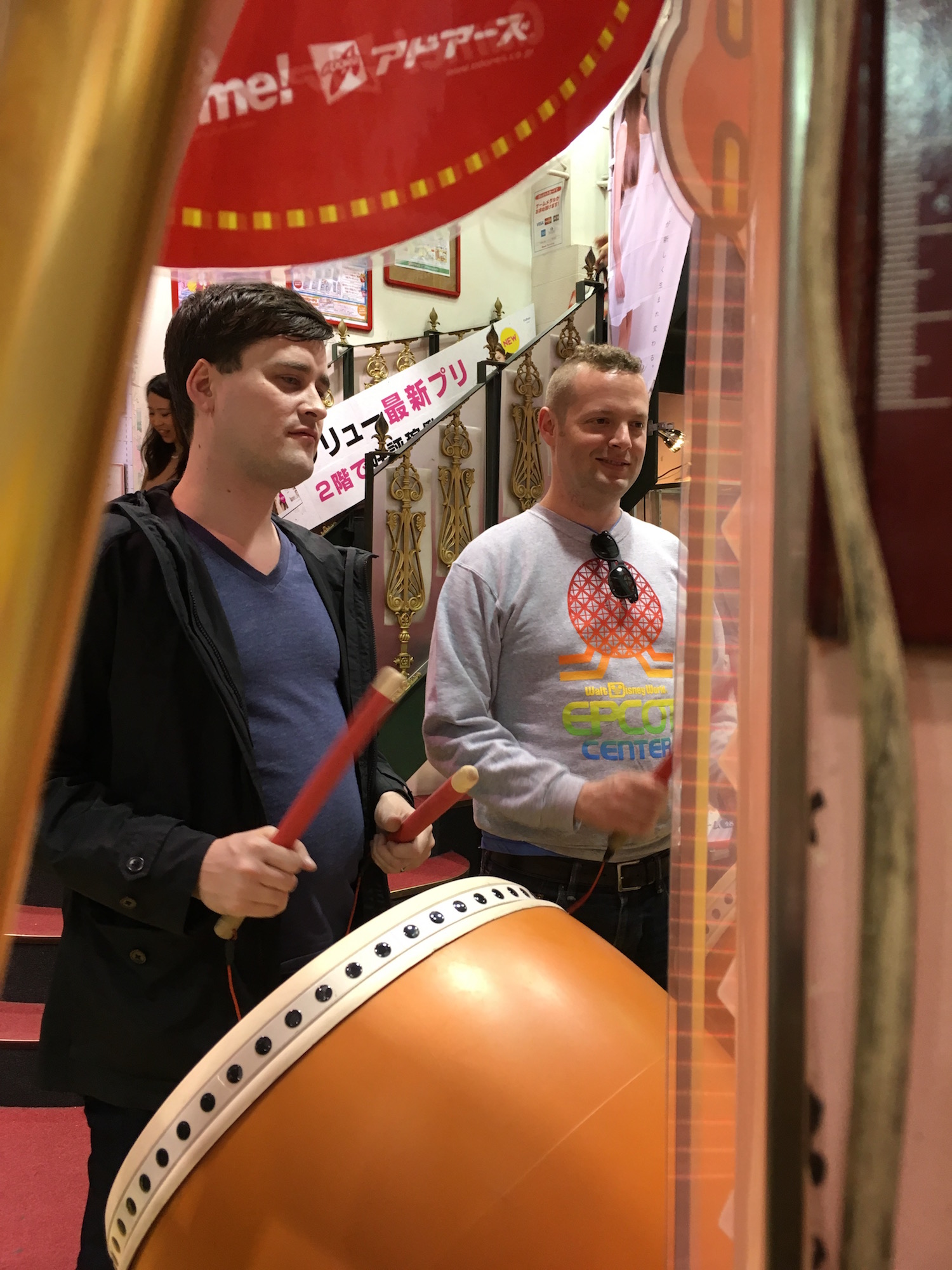 The drumming game was the best game 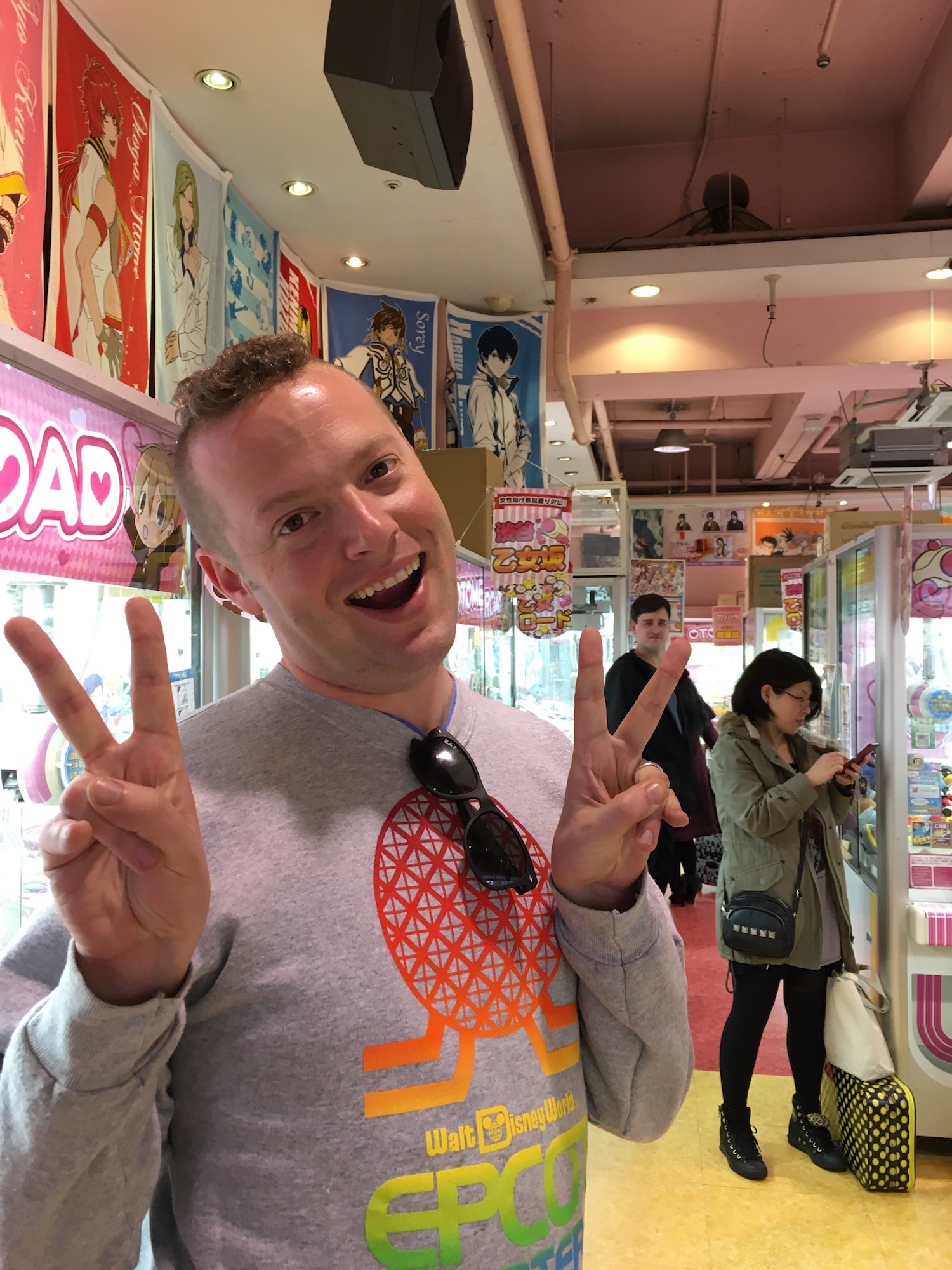 The next day Mike and Melissa had booked us all a sushi lunch in Ginza. (PS: if you have an AmEx card, you should definitely use their concierge to book restaurants.)

The place was called Sushi Iwa, and was down a side alley. It was across the street from where it was supposed to be, due to some renovation work.

Inside, there were six (!) seats at a bar. There were four of us, and for the first hour of the meal it was just us in the restaurant. 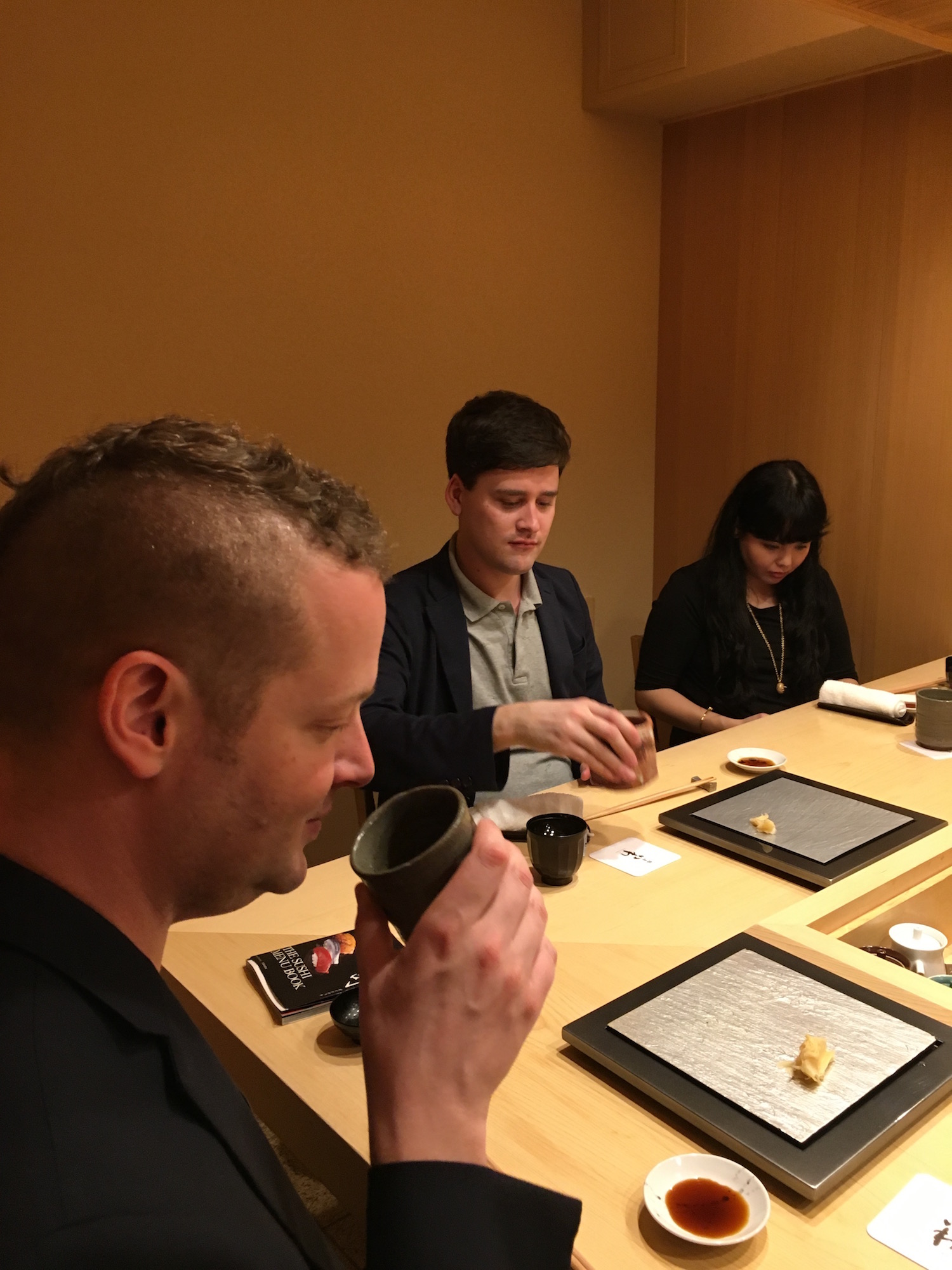 Corner of the sushi bar

The chef was lovely – he prepped all the food right there in front of us. 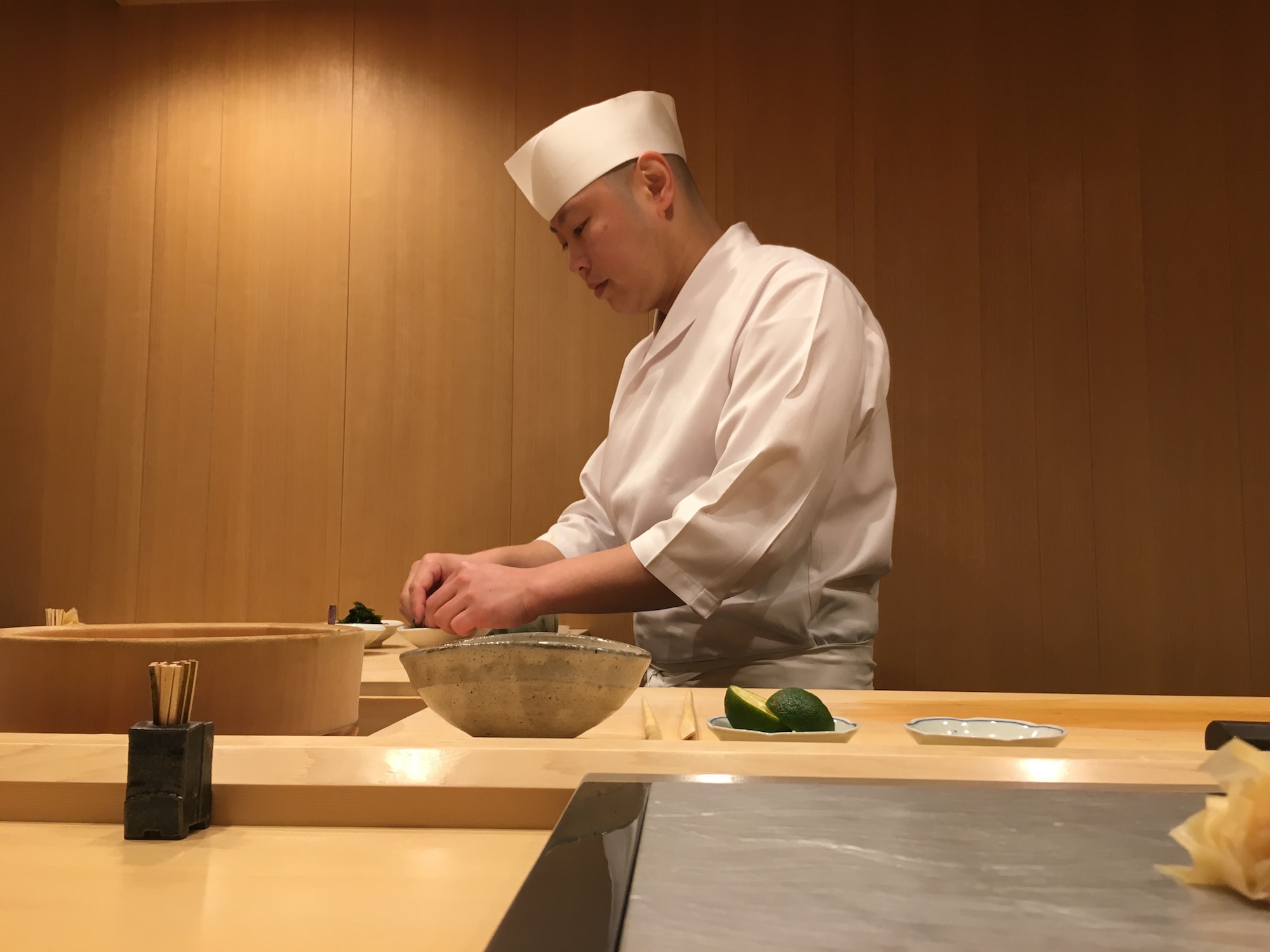 We opted for the longer menu, which came to about $80 per person. The chef would get out the fish at appropriate times to ensure it was at the correct temperature when we ate it. He'd call for a top-up of rice when necessary.

It was amazing to watch him work. Once he'd made the sushi, he'd reach over and place it on our plates. Then, we ate each piece with our hands. And the final products... wow. They were absolutely incredible.

Seriously, can you believe the colour on that tuna?

The chef would name each fish in English (but also had a handy book to point at things that we weren't familiar with). It was (naturally) the best sushi I've ever had. I won't bore you with all the pictures I took of each piece.

Sadly, the meal had to come to an end. We decided to take the train to Harajuku/Meiji Shrine.

Meiji Shrine is dedicated to the old Emperor, so it's super-popular and important. It's beautiful inside and we saw a shinto wedding one time we were there. 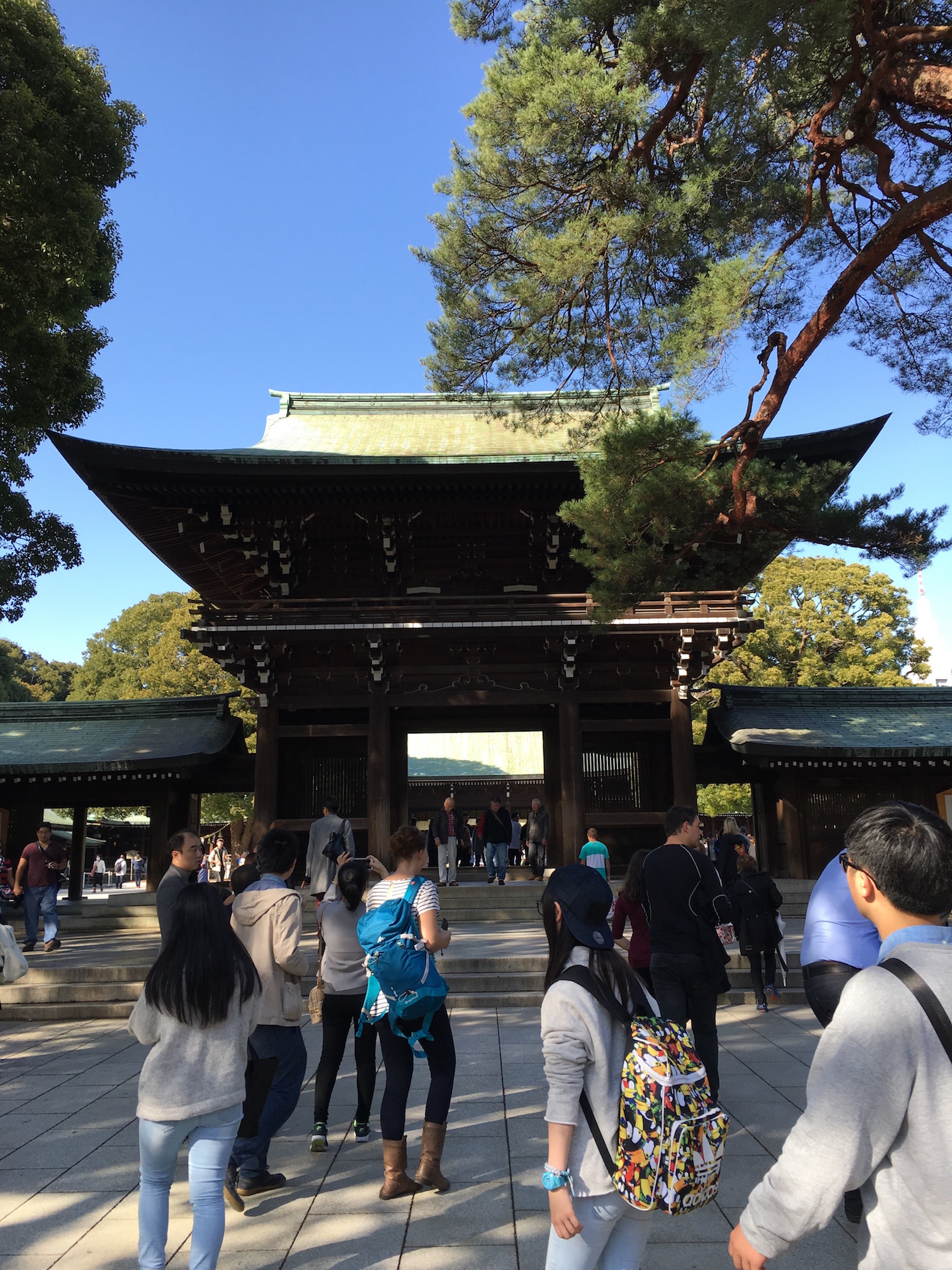 The front of Meiji Shrine

You can write hopes/wishes on these cards

We popped into Yoyogi Park, which wasn't as easy to get to as you might imagine from Meiji Shrine. They're right next to each other geographically, but there's no connecting gates.

We did see some ume blossoms (although they're inferior to sakura, OBVIOUSLY). 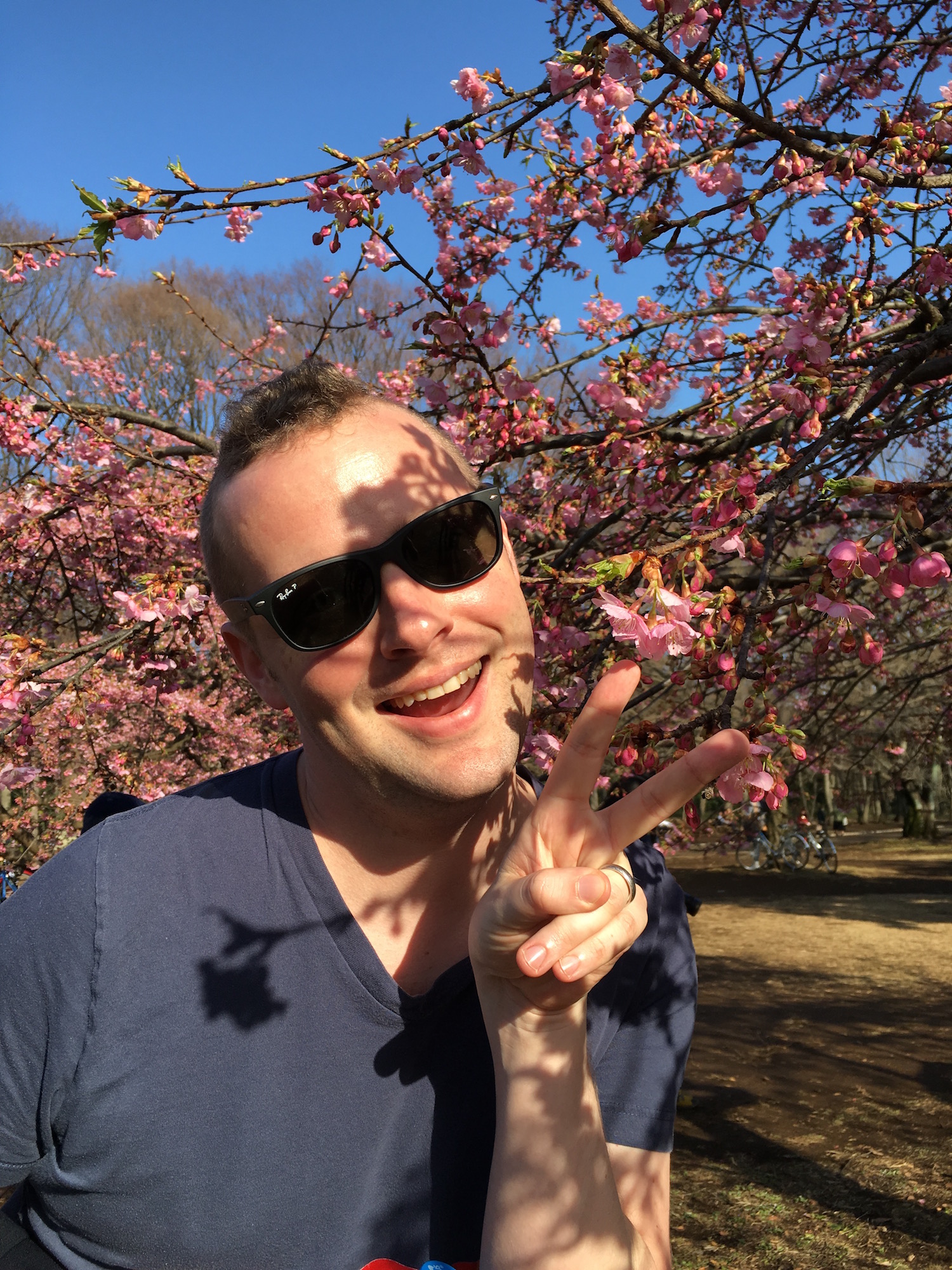 Then we wandered down the main street of Harajuku, Takeshita street. It was a Sunday afternoon and it was a beautiful day out, so of course it was packed. 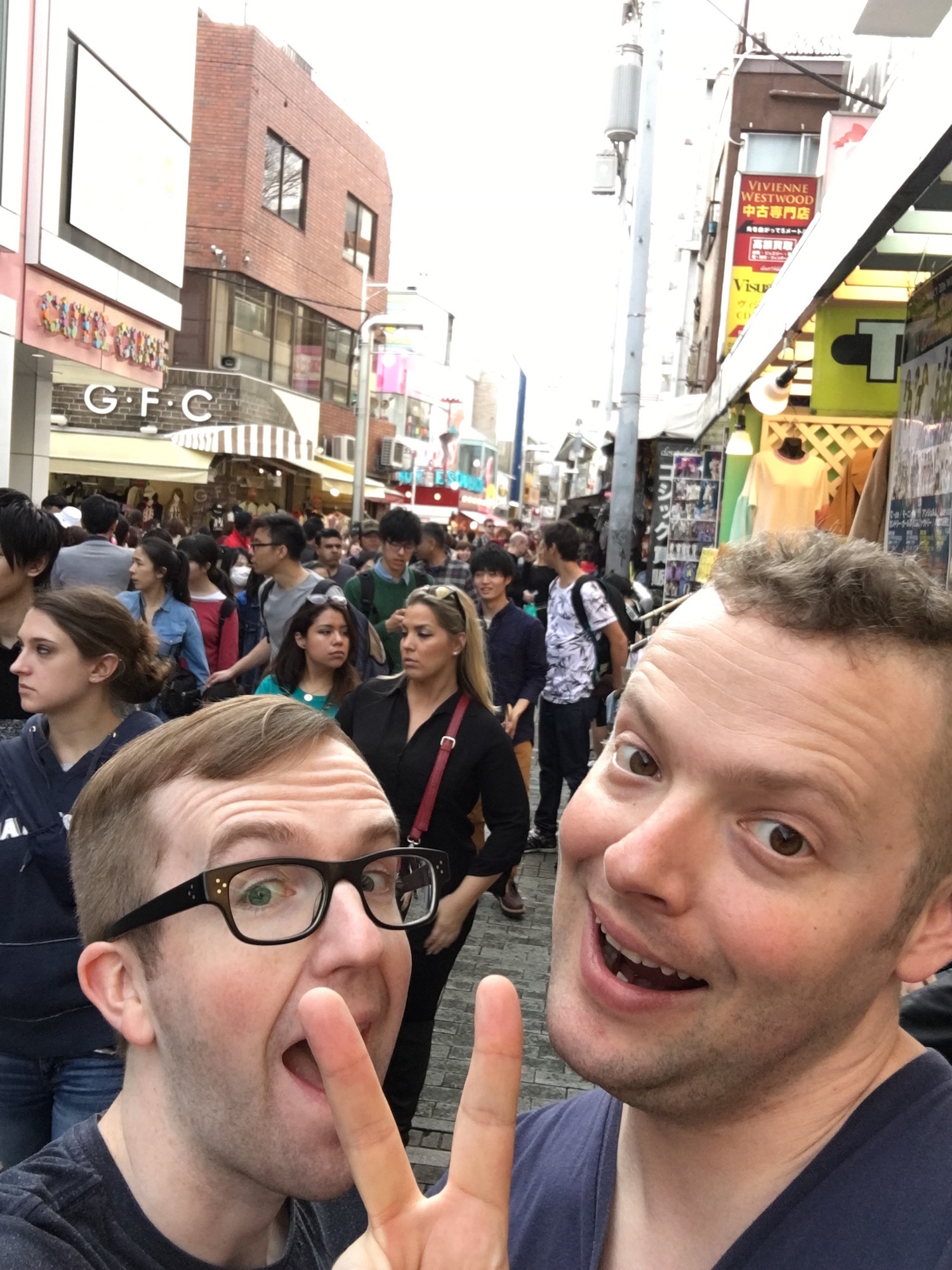 After that exhausting day of shopping, we went to a seafood izakaya place called 魚真 乃木坂店. It was over near Roppongi, which is a sketchy/clubby area we were told to avoid. But this place was great, and we ate lots of uni and other delicious things. And drank lots of nama biiru (draft beer). 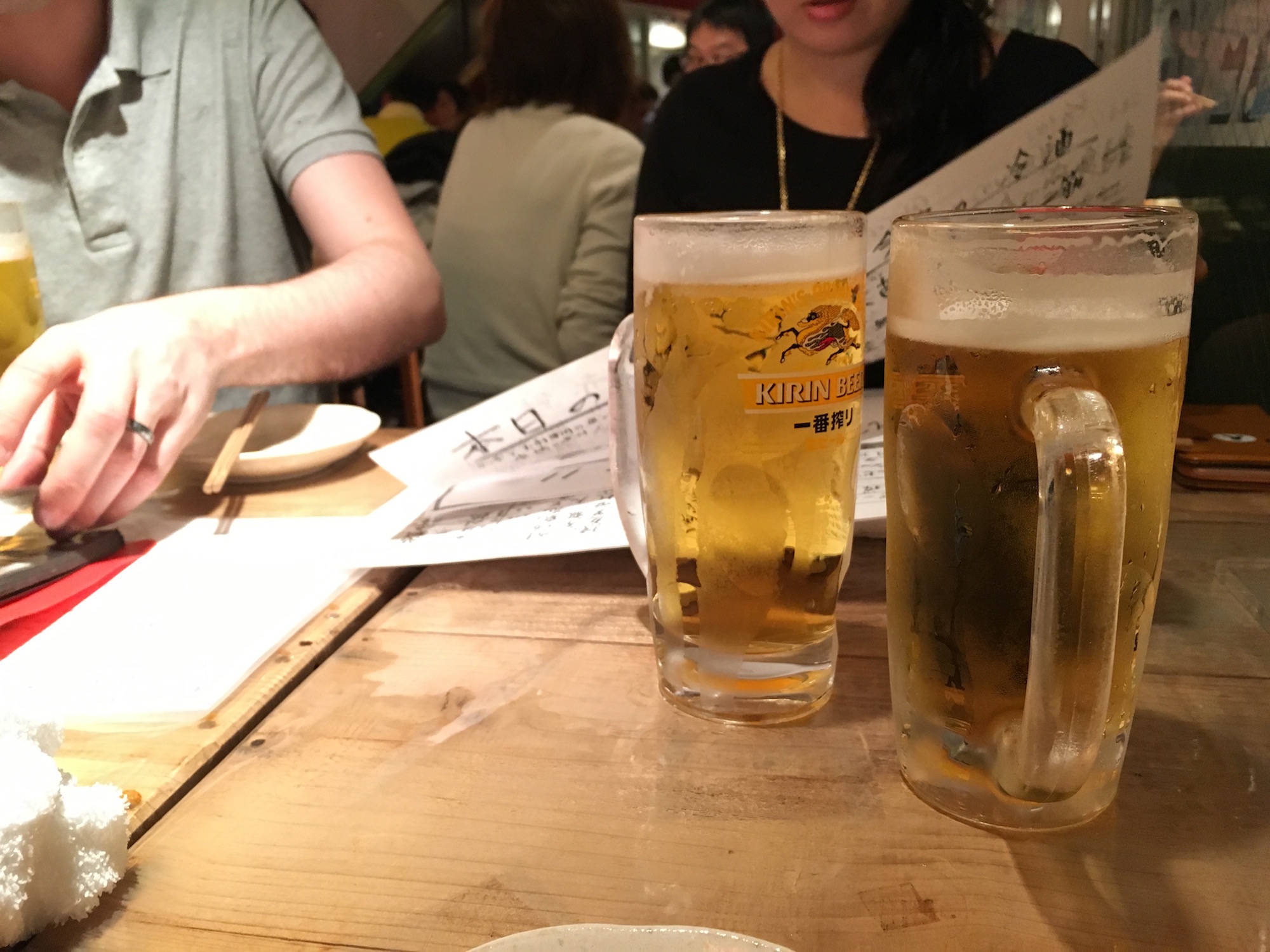 I learnt how to order beer and I stuck with it 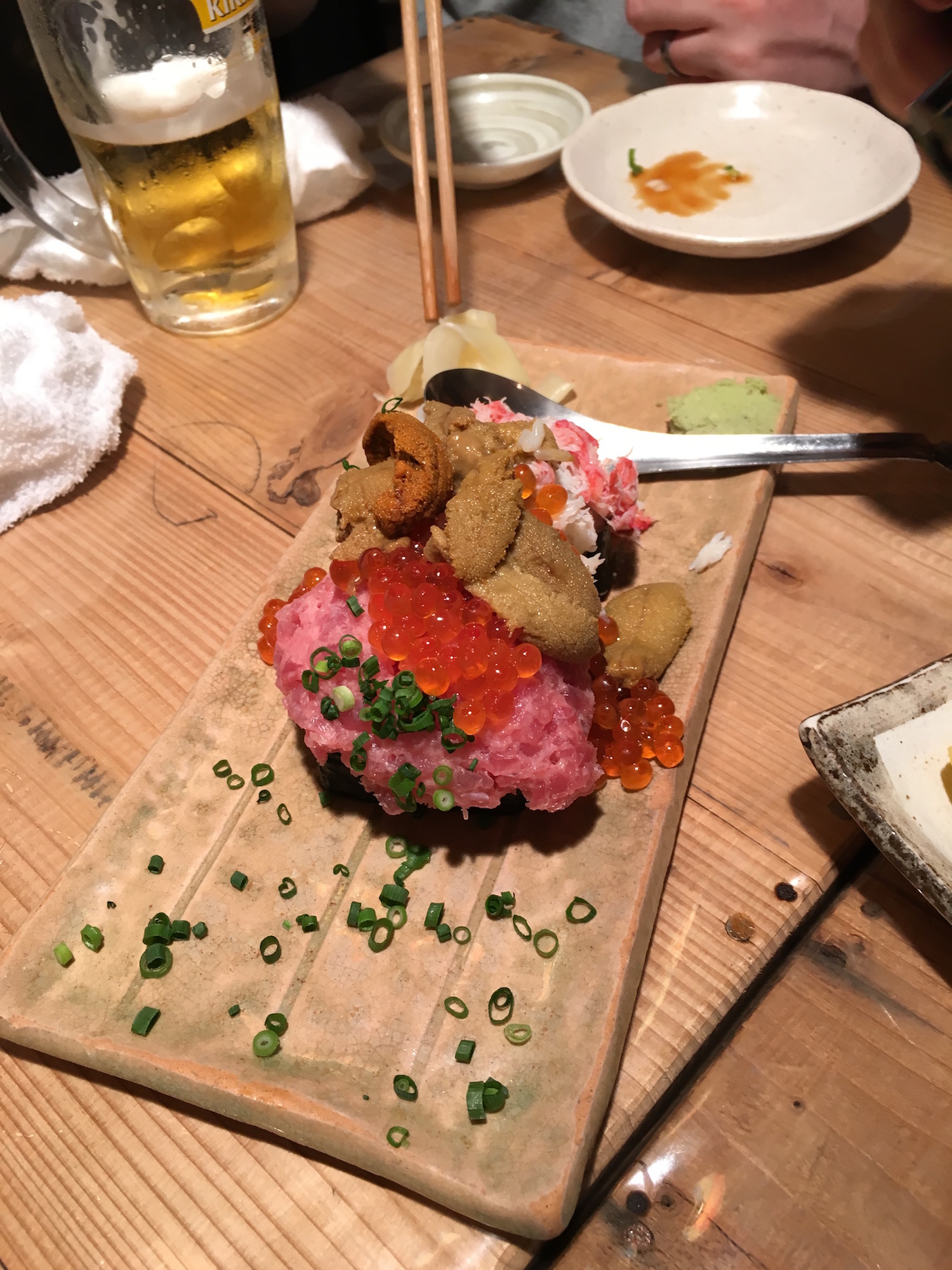 Piles of uni and tuna

To round the night off, we went to McDonalds for something I'd been excited about trying for a while: McChoco Potato. 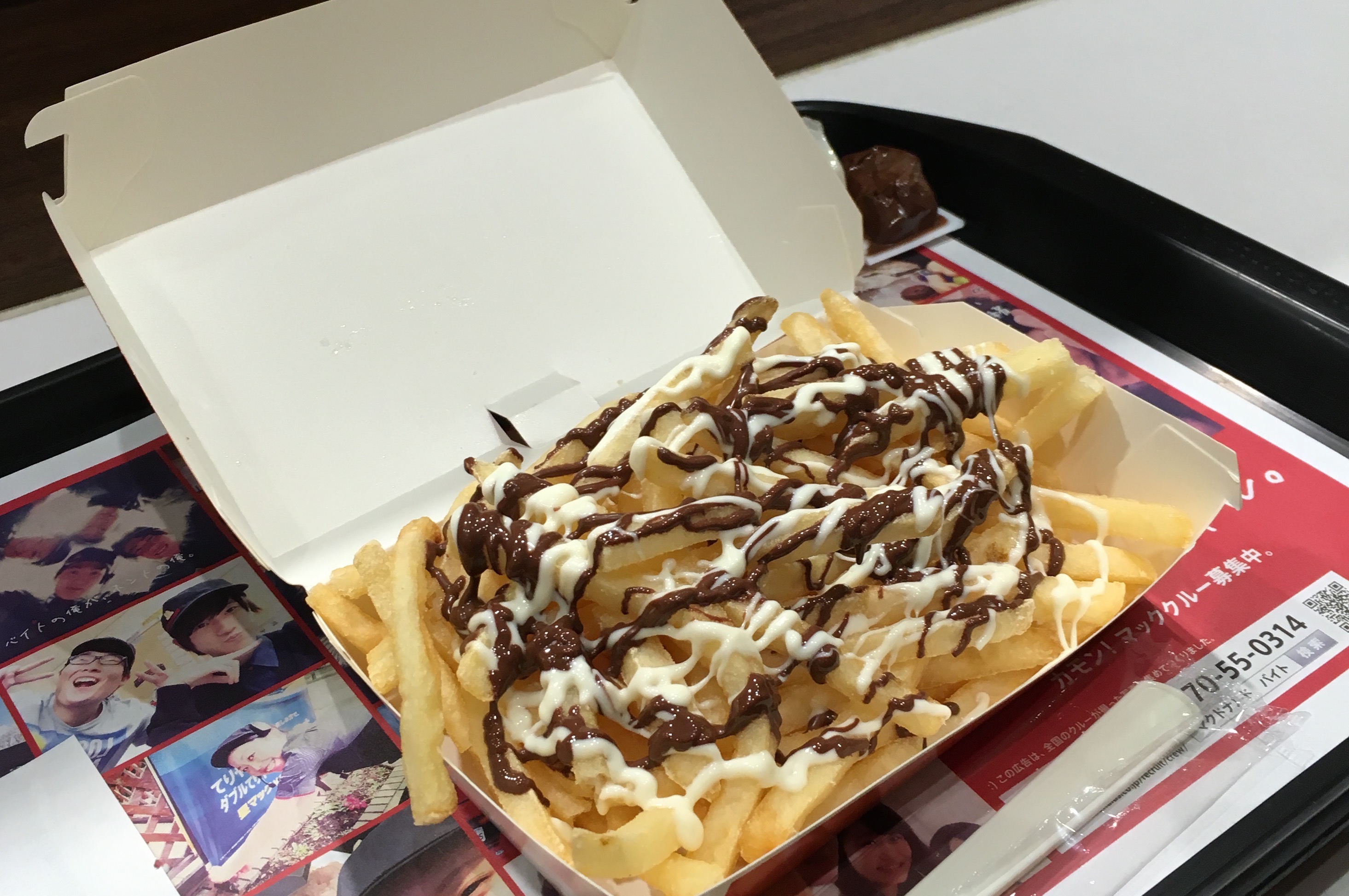 McChoco Potato, y u so good?

It's basically McDonalds fries with milk and white chocolate sauce on them. They were so good and my stomach is rumbling right now with the thought of them.

Next up: we take the shinkansen to Osaka!